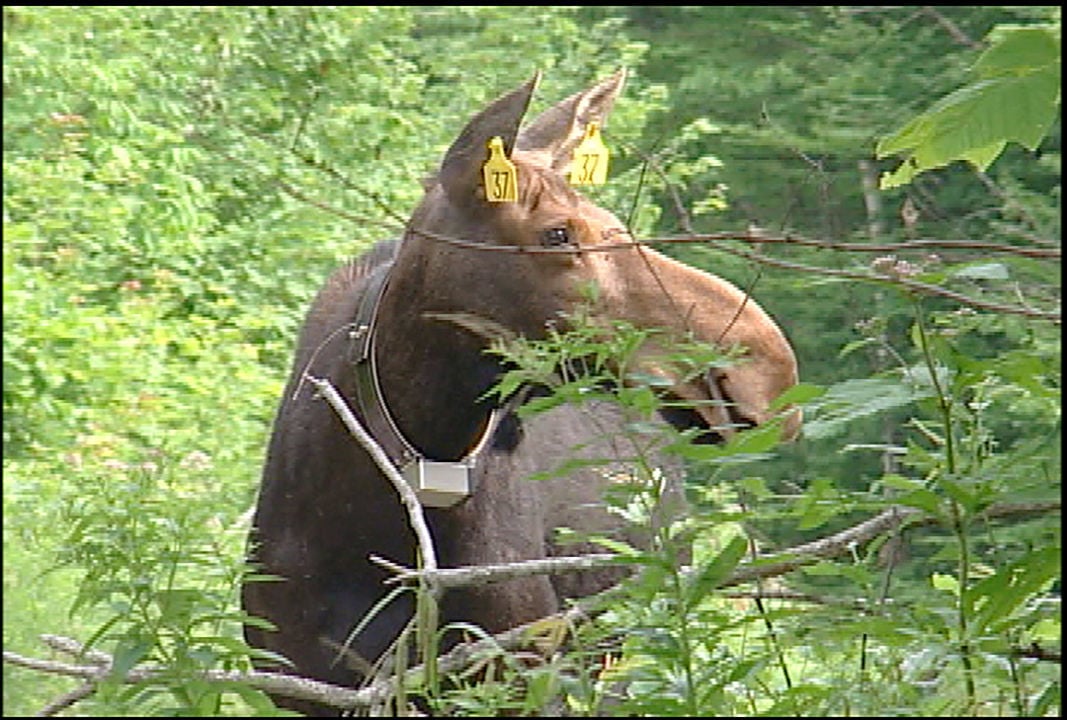 A tagged moose looks back through brush in a wooded area of the state. New Hampshire’s moose population peaked in the late 1990s when an estimated 7,500 Alces alces called the state home. Most recent estimates put the population at fewer than 3,500. 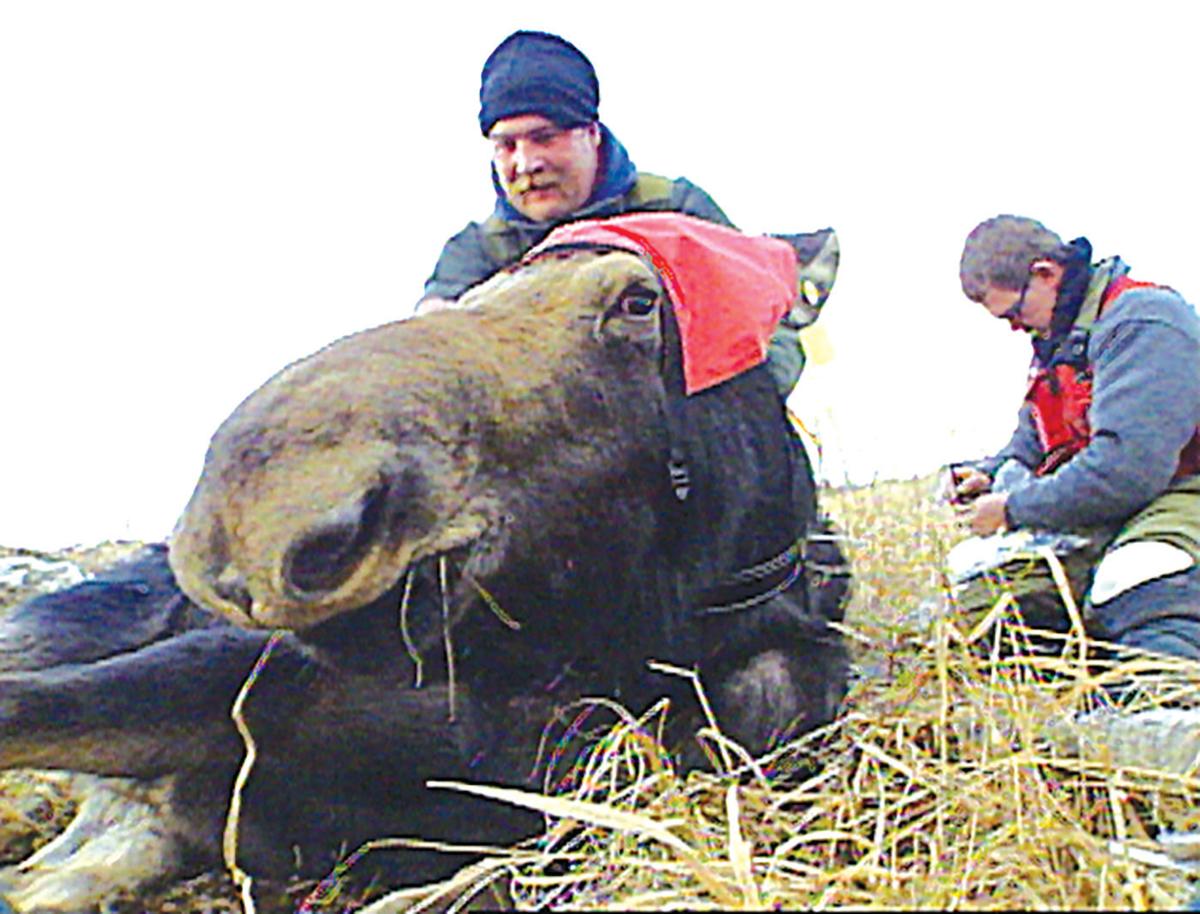 N.H. Fish & Game staff blindfold a moose while doing field work with the animal. Hancock resident Mark Ellingwood, N.H. Fish and Game’s wildlife division chief, said the state is at the forefront of moose research and is partnering with Vermont and Maine on a multi-year moose study.

A tagged moose looks back through brush in a wooded area of the state. New Hampshire’s moose population peaked in the late 1990s when an estimated 7,500 Alces alces called the state home. Most recent estimates put the population at fewer than 3,500.

N.H. Fish & Game staff blindfold a moose while doing field work with the animal. Hancock resident Mark Ellingwood, N.H. Fish and Game’s wildlife division chief, said the state is at the forefront of moose research and is partnering with Vermont and Maine on a multi-year moose study.

A creature that measures a mere fraction of an inch is ravaging New Hampshire’s largest mammal.

How is that possible?

For one, strength in numbers.

“It’s not a good thing to have 50,000 winter ticks sucking your blood, even for a healthy moose,” Lee Kantar, a moose biologist with the Maine Department of Inland Fisheries and Wildlife, told The Sentinel.

New Hampshire’s moose population peaked in the late 1990s when an estimated 7,500 Alces alces called the state home. It is now estimated that fewer than 3,500 of the majestic animals roam the Granite State, due to winter ticks and a variety of other factors.

Steve Agius, manager of the Nulhegan Basin Division of the Silvio O. Conte National Fish and Wildlife Refuge, said moose were well above carrying capacity in New England 15 years ago. Moose are now at or below carrying capacity, he said.

“All these ticks are constantly feeding,” he said. “It’s sad. It’s quite depressing to see.”

How did we get here?

In a way, moose are victims of their own success. The burgeoning population of the 1990s and early 2000s, combined with a series of short and mild winters, created ideal conditions for winter ticks to survive.

In an article written for New Hampshire Wildlife Journal, now-retired moose biologist Kristine Rines wrote that a study from 2001 to 2006 resulted in “conclusive” and “damning” evidence that winter ticks were the main cause of moose mortality in northern New Hampshire.

Rines, who was the state’s main moose biologist for more than 30 years, wrote that winter ticks lay their eggs on the ground in June and hatch in late summer. The ticks, now in the larval stage, climb vegetation and quest — or look for — a host to walk by. The larval ticks, which could number in the thousands, interlock their legs so that when one tick attaches to a host (most often a moose) they all come along for the ride.

The questing continues until freezing temperatures or lasting snow kills the larvae, Rines wrote. A late-starting winter, therefore, gives the ticks extra time to find a host. Once on a host, the larvae will remain there all winter and “take three blood meals,” wrote Rines. Moose lack a grooming instinct to remove the tiny critters because moose did not evolve with the ticks.

“If a moose picks up five or six groups, you can have tens of thousands of ticks on that one moose,” Kent Gustafson, wildlife programs supervisor for the N.H. Fish and Game Department, said. “That’s really the problem we’re facing.”

Winter ticks cause a high mortality rate among first-year moose, or calves, as they become anemic and often succumb to harsh winter conditions. Female moose, or cows, are also affected as they lose blood and become physiologically stressed while trying to produce calves, said Maine biologist Kantar, who is a New Hampshire native and once lived in the Monadnock Region.

Many calves are born underweight, and twins are less frequent, he said.

Winter ticks are less of a problem in the southern part of the moose’s range. Brain worm, however, becomes the main killer of moose in areas that have a high density of white-tailed deer. Brain worm is not fatal to deer but it is to animals such as moose, elk and caribou, which have never evolved defense mechanisms for the parasite.

Brain worm and wolf predation are thought to be the main causes of Minnesota’s sharp moose decline.

“Ticks or brain worm, it’s all related to climate one way or another,” Meade Cadot of the Harris Center for Conservation Education in Hancock, said.

Return of the hunt

The good news is that New Hampshire’s moose population has seemed to stabilize over the past several years. In fact, the moose hunt is returning to the Monadnock Region ever so slightly.

After issuing no moose-hunting permits in 2017 or 2018 in the Southwest Region, N.H. Fish and Game has allotted one permit in each of the region’s three Wildlife Management Units for the upcoming 2019 moose season.

The three moose permits are well below the 30 to 35 permits that were the norm in the early to mid-2000s. Fish and Game offered five moose permits in each unit of the Southwest Region from 2014 to 2016.

Fish and Game has a goal in the Southwest Region of 0.23 moose per square mile. The current level is 0.24, based on moose seen per 100 hunter hours during deer season. The estimate is verified by an infrared aerial survey, Gustafson said.

“It’s an icon and highly valued resource. We share (the public’s) value in terms of moose,” Mark Ellingwood, N.H. Fish and Game’s wildlife division chief, said. “There is a huge ecological and economic value, including tourism, attached to moose.”

Ellingwood, a Hancock resident, said New Hampshire is at the forefront of moose research and is partnering with Vermont and Maine on a multi-year moose study.

“It’s a huge investment for us,” he said. “We are doing our due diligence with this icon of the North Country.”

Kantar said one of the only options in controlling winter ticks is to let nature take its course and reduce the moose population, which in turn, would slow down the proliferation of winter ticks.

“Even that’s no guarantee,” he said.

Spraying pesticides to kill the ticks is not practical because of the massive land area that would need to be covered, he said. It could also have dramatic unintended consequences, he added.

Equipping moose with pesticide collars, which has been suggested by the public, is also not an option because of the time and expense involved with such a project. It’s also dangerous for those in the field as moose are wild animals and collars would need to be reapplied frequently.

With climate playing a role in the decline of moose, Kantar said biologists are very much dealing with the unknown when it comes to saving New England’s largest and most iconic animal.

“It’s a complex thing to understand climate change. It’s so variable every year, and it’s hard to put a finger on it,” he said. “There are strong concerns, no question about that, but you have to maintain a level of optimism.”