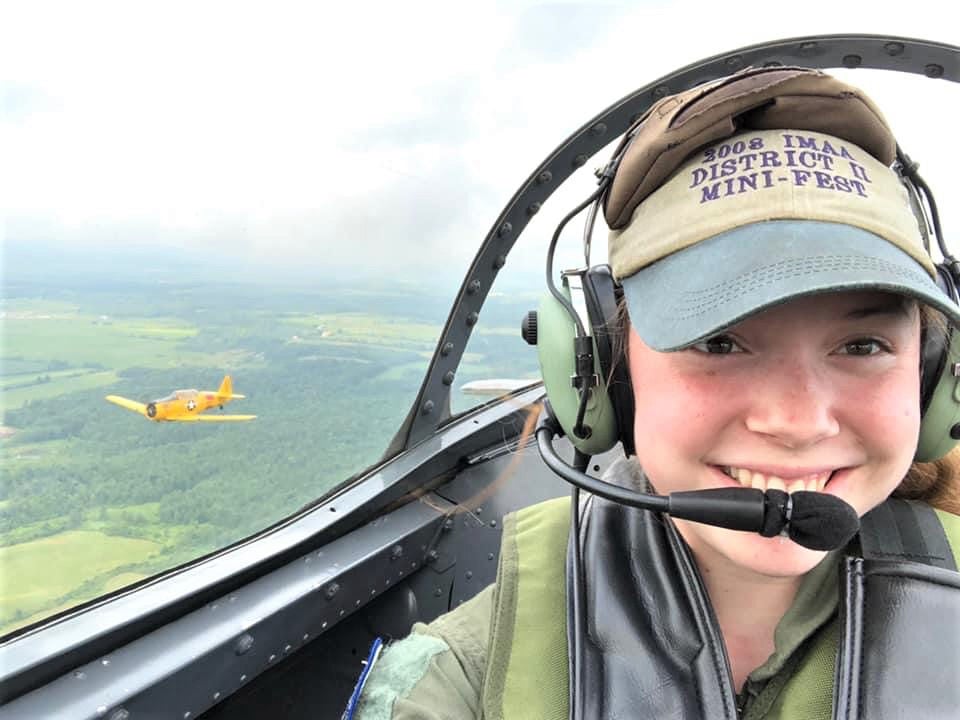 Hunter Daris rides with her father, Jim Daris, who was practicing formation flying with a few other pilots, in this photo taken in the Keene area in recent months. 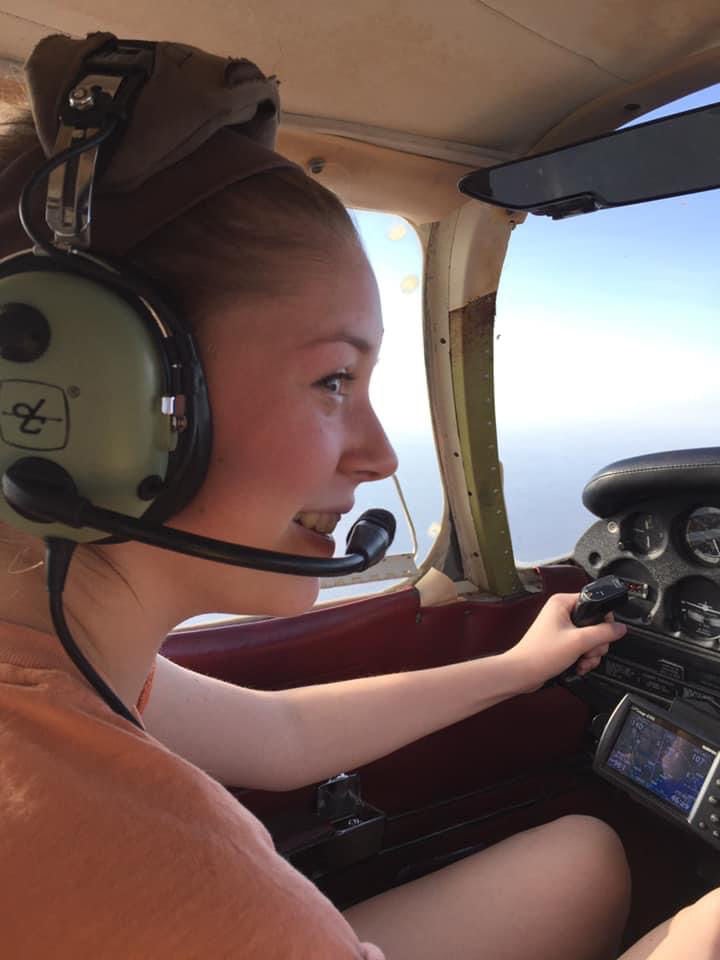 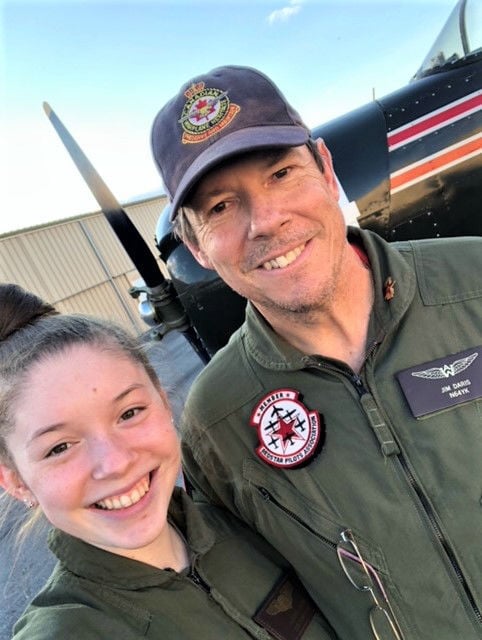 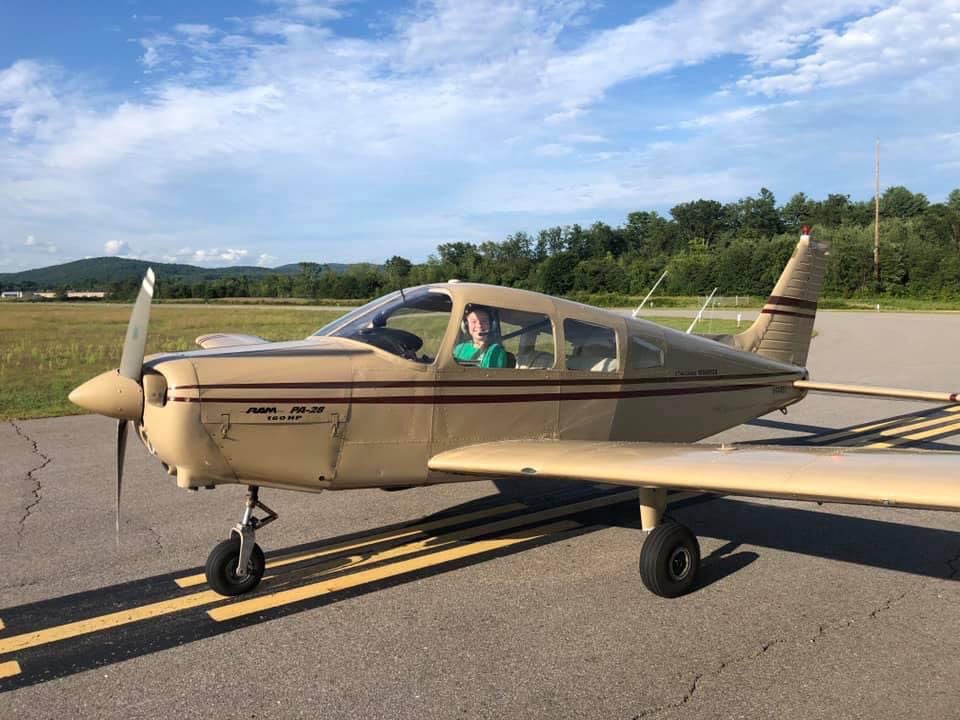 Hunter Daris is shown after her first solo flight on Aug. 27, 2019. The plane is the same one she would later use for her pilot's license test. 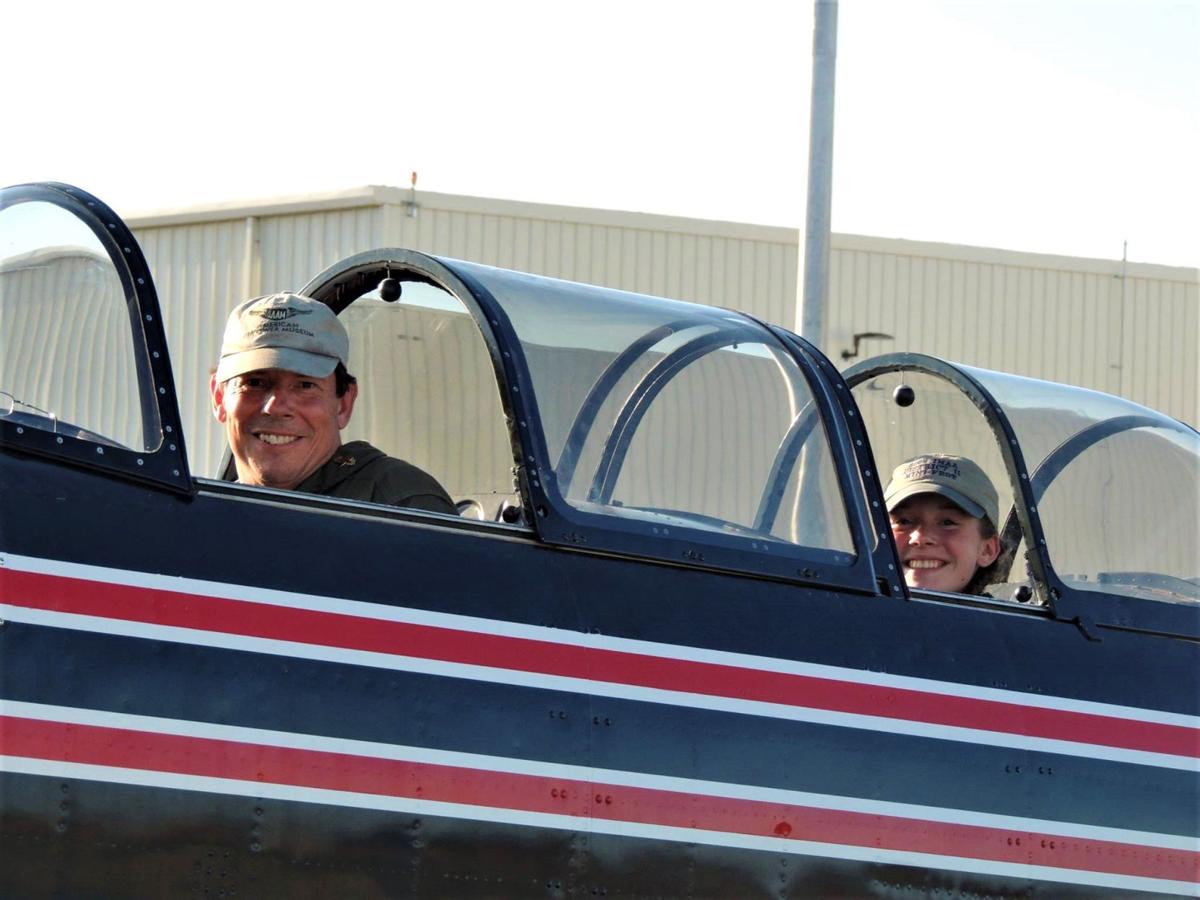 Hunter Daris, rear, with her dad, Jim, at the Westfield Air Show in Massachusetts in August 2017. 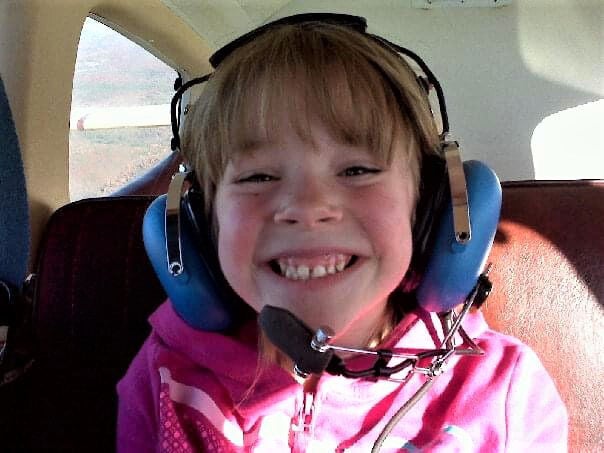 Hunter Daris, age 6, is all smiles on Oct. 25, 2009, in a plane being piloted by her dad, Jim. Eleven years later, she'd use that same plane to get her pilot's license.

Hunter Daris rides with her father, Jim Daris, who was practicing formation flying with a few other pilots, in this photo taken in the Keene area in recent months.

Hunter Daris is shown after her first solo flight on Aug. 27, 2019. The plane is the same one she would later use for her pilot's license test.

Hunter Daris, rear, with her dad, Jim, at the Westfield Air Show in Massachusetts in August 2017.

Hunter Daris, age 6, is all smiles on Oct. 25, 2009, in a plane being piloted by her dad, Jim. Eleven years later, she'd use that same plane to get her pilot's license.

Last Sunday, Hunter Daris, 17, was awarded her private pilot license. It’s a significant accomplishment, not only because of her age, but because only 7 percent of the nation’s pilots are women, according to the Federal Aviation Administration.

“It’s my passion,” said the teenager, who lives with her parents in Fitzwilliam.

Hunter got her start in aviation earlier than most — at age 6. Her father, Jim Daris, who is employed as a manufacturing engineer in Keene, is a certified flight instructor, who owns a small plane. He often took her along when he flew. At 14, she accompanied him to an air show in Westfield, Mass., where they watched a performance by the Thunderbirds, the United States Air Force demonstration squadron. But later, while waiting in line for an autograph, she was shocked to discover there were no female pilots in the group. (Currently there is only one female Thunderbird, Major Michelle Curran.)

That encounter fanned Hunter’s resolve to pursue her own private pilot license. Initially her dad was her instructor.

“She’s definitely a natural. She has a gift,” he said.

Now in her senior year of high school, Hunter attends Emma Willard School, an independent day and boarding school in Troy, N.Y., not far from Albany. It’s an all-girls school, recognized not only for its educational curriculum but for its Gothic architecture and abundant gargoyles, highly reminiscent of Harry Potter’s Hogwarts.

But in March, she returned to Fitzwilliam due to the COVID-19 pandemic. At home, she continues her classes remotely. She also trained for her pilot license at Monadnock Choppers, a small aviation business owned and operated by military veterans at Keene’s Dillant-Hopkins Airport in North Swanzey. They provide flight instruction in small planes and helicopters, as well as sales of both.

Hunter trained in a Piper Warrior, a small airplane. Her instructor was Stefan Naumburger, who found her to be a very capable student, both in ground instruction — assessing weather conditions, taxiing and the like — and in the air.

“The first time, she was nervous,” he said. “The next time, she was confident. I was so impressed by how much she knew ... She knows how to handle aircraft and what to do in different situations. She was almost to a commercial level. She handled simulated failures like a pro. She didn’t get flustered.”

In all, it took Hunter about three years from that memorable day at the Thunderbirds show to earn her private pilot license (PPL). Along the way, she logged more than 200 hours of instruction time. She repeatedly practiced dozens of take-offs and landings, and perfected other maneuvers.

At age 16, she flew her first solo venture. Her mother, JoAnne Daris, was nervous. “I did not go to the airport,” she said.

Her father admits to being anxious, too. “That’s an understatement,” he said. “My heart was in my throat.”

But Hunter excelled. In short time, she completed more than the required 10 solo flight hours, and multiple solo trips of more than 50 miles each. To meet her goal, she also undertook a 150-mile trip to Claremont and on to Sanford, Maine, and back to Keene, as well as trips to Saratoga, N.Y., and other destinations.

Beyond that, she spent the summer months studying online for the comprehensive written test, which contains about 60 questions.

“It was challenging,” she said of her training. “It’s definitely a lot of hard work. I grew a lot in the course of three years.”

Naumburger is thrilled for his prized student’s achievement.

“I am super proud of her for doing it. It’s a huge accomplishment,” he said.

Hunter’s private pilot license, which is valid internationally, can now open new doors in aviation for her. Ironically, she doesn’t have her driver’s license yet, so will still need a ride to the airport to explore them.

Like other licensed private pilots, she could become a ground instructor or pursue advanced training in instrument rating, flying in clouds or other skills. Or she could train in acrobatics, such as performing spins, loops and flying upside down. Other opportunities include but aren’t limited to selling aircraft, or volunteering as a pilot with nonprofit organizations. And there are more. She can fly as high and as far as she wants.

“She has such a passion for flying. Even when she just talks about it, her face just lights up”, JoAnne Daris said. “We have always tried to teach her that she can do anything she puts her mind to.”

Besides joining the small, elite number of female pilots, Hunter reached yet another major goal during her time at home. She also just earned her 2021 Girl Scout Gold Award, the highest achievement a Girl Scout can attain. Only about 6 percent of Girl Scouts earn the prestigious award. Requirements include an intensive 80-hour sustainable community service project.

She spent 100 hours from May through September growing an organic garden at home and at a designated space at Tracie’s Community Farm in Fitzwilliam. She donated the produce to Helping Hand Center in nearby Troy.

In January, she will return to school in New York. Besides her studies, she plans to choose colleges to apply to, and envision her future — maybe even a career in aviation. Right now, she’s considering a couple of engineering schools and exploring the U.S. Air Force Academy and U.S. Naval Academy.

“There are so many opportunities,” she said.

Sorry, there are no recent results for popular articles.

Sorry, there are no recent results for popular images.