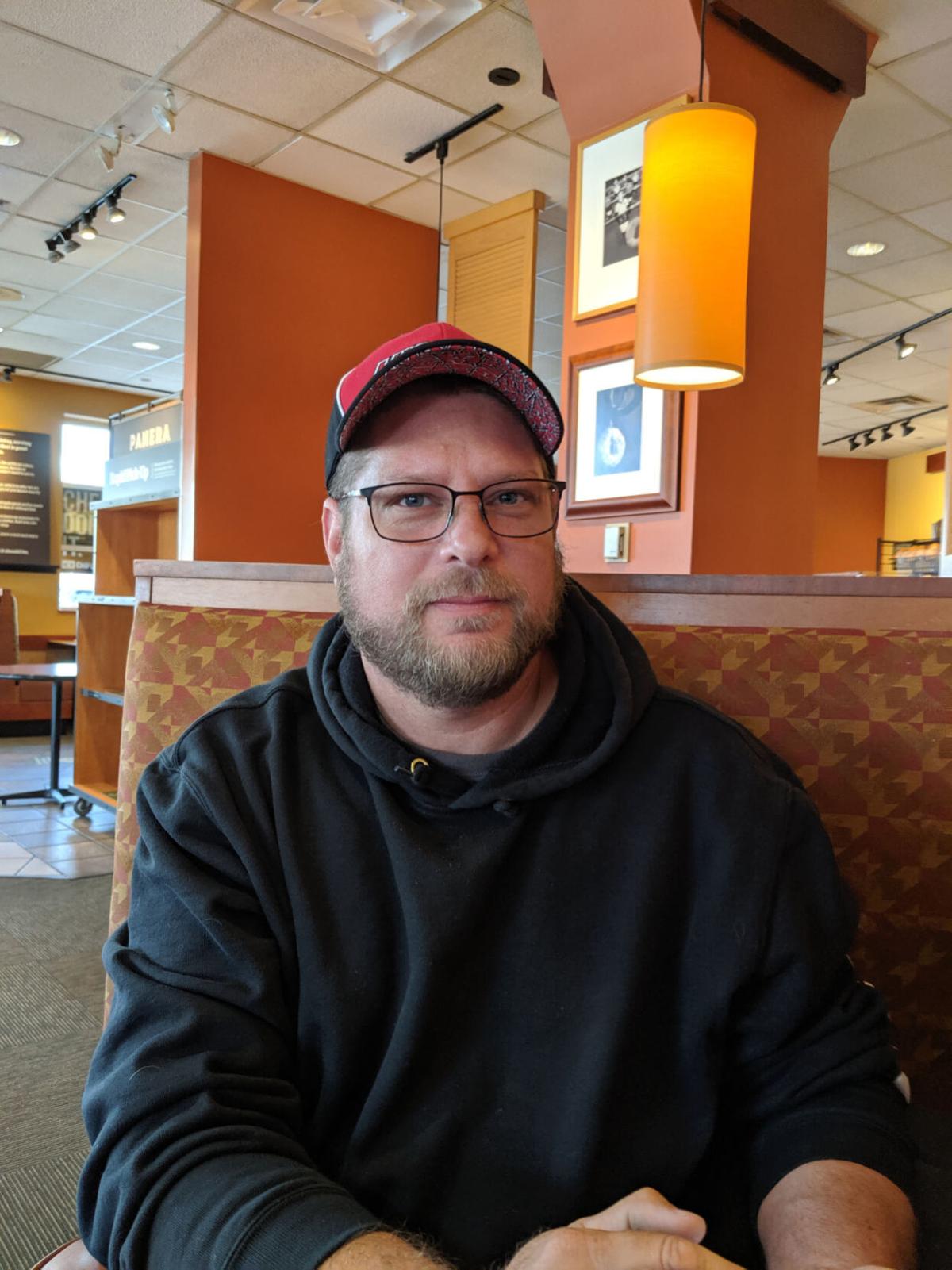 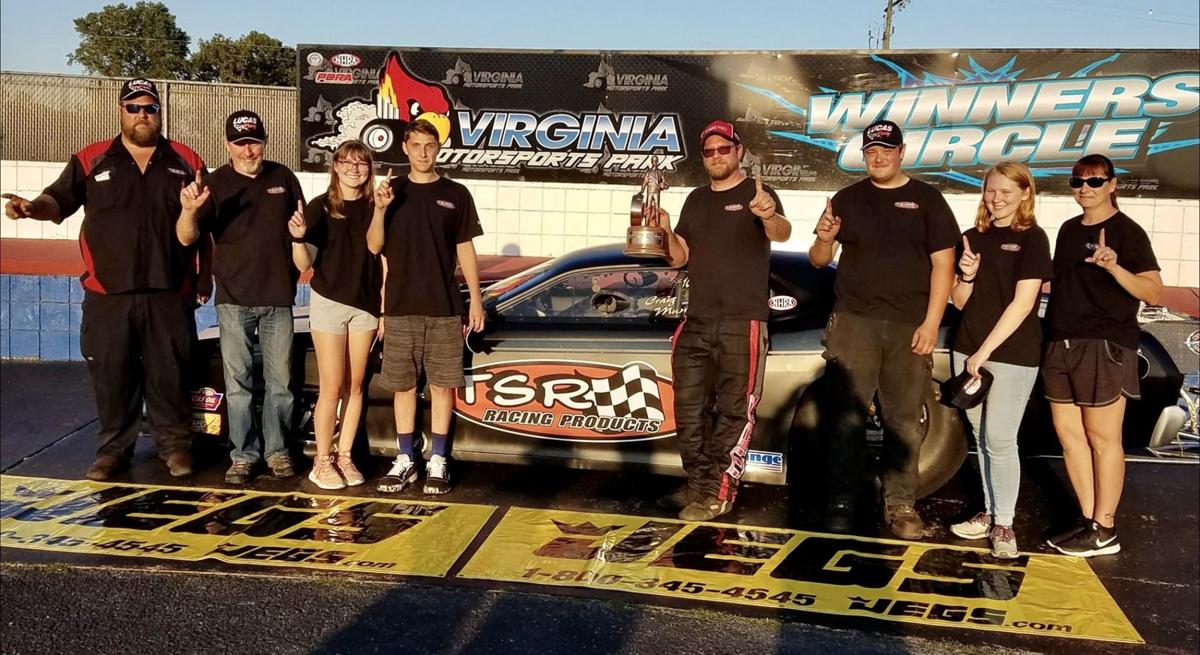 Craig Munroe (holding trophy) with friends and relatives, in front of the dragster he drove to win the National Hot Rod Association competition at the Virginia Motorsports Park in October. From left, Chris Munroe of Gilsum; Shawn Fournier of Georgia, Vt.; Kylie Joslyn of Swanzey; William Munroe and James Munroe, both of Gilsum; Olivia Budzik of Richmond; and Jessica Munroe of Gilsum.

Craig Munroe (holding trophy) with friends and relatives, in front of the dragster he drove to win the National Hot Rod Association competition at the Virginia Motorsports Park in October. From left, Chris Munroe of Gilsum; Shawn Fournier of Georgia, Vt.; Kylie Joslyn of Swanzey; William Munroe and James Munroe, both of Gilsum; Olivia Budzik of Richmond; and Jessica Munroe of Gilsum.

For Craig Munroe, it’s all about cars and speed.

As owner of a drivers’ education company, it’s about slow to moderate speeds. As the builder and racer of dragsters, it’s about high-performance vehicles that can accelerate from zero to 190 miles per hour in 7.2 seconds, for a distance of a quarter-mile, exerting about twice the G-force as astronauts experience during take-off.

The 47-year-old Surry resident has been around cars his entire life — his father was involved in all aspects of automobiles — and last month, he achieved what had been a lifelong dream, winning a prestigious national trophy Oct. 1 at Virginia Motorsports Park. This places him in the pantheon of champions in the National Hot Rod Association (NHRA), founded in 1951 to take illegal racing off regular streets.

“Affectionately known as a ‘Wally’ in honor of the late NHRA founder Wally Parks by the thousands of NHRA competitors who seek it, the trophy … remains one of the single biggest motivators for high-performance enthusiasts …,” according to the NHRA webpage.

“I’ve been 31 years in the drag-racing scene, ever since I was 16 years old,” Munroe said, recalling when he built his first race car. During that time, he estimates, he’s competed in perhaps as many as a hundred races.

Recently interviewed at the Keene Panera, Munroe sat down in a booth, pushed his ballcap back, and explained what sparked his interest in high-performance racecars and some of the intricacies of drag racing.

“How do you stop when you’re going that fast?” he asked himself rhetorically about racing at those extreme speeds. “I just let off the gas and pull the parachute. Yeah, you have to say it shoves you back in your seat a bit.”

Munroe won two qualifying races before the Virginia event, which featured 450 cars. He then bested his opponent (drag racing involves only two cars competing against one another) with a quarter-mile time of 7.264 seconds, at a top speed of 183 miles per hour.

By nature a modest man, Munroe said his recent racing accomplishment is much more than just a trophy and title.

“I really did this for my dad,” he explained, referring to the late Carl Munroe, who started TSR Racing Products, of Gilsum, in 1993. “I built the car my dad and I always talked about. It was in his memory.”

The company, which supplies high-performance transmission parts for drag racers, classic-car enthusiasts and mud racers worldwide, is now run by Craig and his younger brother, Chris. Craig also owns TSR Driver Training School, of Surry, which serves high school students in this region. And, he has a roofing and construction business, CPM Building, in Surry. The troika of jobs keeps him busy seven days a week.

“I pretty much work all the time,” he said.

One of his best long-time friends, Jonathan Perry of Keene, attested to Munroe’s unrelenting work ethic.

“Craig is certainly one of the hardest-working people I’ve ever known,” Perry said. “He’s been running three businesses simultaneously since I’ve known him. What makes him even more noteworthy is the fact that everything he does is focused on family.”

Munroe’s father had been the auto shop teacher at Monadnock Regional High School in Swanzey, but in his spare time began to stock and sell parts used in specialized transmissions for racecars, and established a reputation as a go-to guy in that field, Munroe said. That led to TSR Racing Products’ founding. Then his father wrote a book called “Powerglide Transmission Handbook,” published by the prestigious Penguin Press, which has become a bible for racing enthusiasts since it was first published in 2001.

That book cemented his father’s reputation in the design, building and repair of high-performance engines, Munroe said.

Mentored by their dad, Craig and his brother both became interested in racecars when they were kids in Gilsum. By age 16, Craig had built his first dragster, with 12 to follow in the years ahead, culminating with the one that won the Wally.

During high school and college, Craig worked a series of part-time jobs, including in the parts department at Keene Chrysler Jeep Dodge, all the time perfecting his talents in building high-performance automobiles under the tutelage of his father. The family business prospered, eventually also employing Craig and his brother.

“I’ve known Craig and Chris since they were about seven or so years old. I worked with their dad at the Chrysler dealership in Peterborough back in the ’80s. Their dad was a very clever guy,” said Jon Roe, who now works in the service department at Keene Chrysler Jeep Dodge.

In 2004, tragedy struck the Munroe family.

“One day we were working together, and my dad had a real pain in his side, and it got worse,” Munroe said. “He went to the emergency room, and they found a tumor on his liver. In 38 days, he went from being perfectly healthy to dead.

“I saw him every day of my life,” Munroe said. “His death left a very big hole. He was a very special guy.”

His friend can also speak to Munroe’s devotion to his father.

“Craig constantly tells stories about his ‘old man,’ and lights up every time,” Perry said.

In addition to the racing products company, Munroe also took over TSR Driver Training School, which his father had also started, and earned a state certificate in driver education through Keene State College. The company has seven employees and offers training both in the classroom and behind the wheel. Most of its customers are high school students, as the state of New Hampshire requires anyone under the age of 18 who wants a driver’s license to take 30 hours of classroom training and 10 hours of driving instruction.

It might be supposed that riding in cars operated by new drivers might be a bit nerve-wracking, but Munroe said he’s been doing it a long time. “I’m pretty calm.”

Nonetheless, he said Keene is an especially difficult place for new drivers to navigate, especially the roundabouts, particularly Central Square. “That’s why we take them out in the country first,” he said, “to get used to things.”

All driver education ceased in mid-March due to the pandemic, and started back up this summer, but with classroom sessions done only through online video. Driving instruction is conducted with all participants wearing masks and the cars sanitized after each session.

“We’re buried with driver’s education now because of the backlog caused by COVID,” Munroe said. Pre-COVID, most of the classes in the region were held at Monadnock Regional High School as well as in Hillsboro.

Despite his heavy work load with his three jobs, Munroe intends to keep racing, and hopefully, winning.

At a glance: Craig Munroe