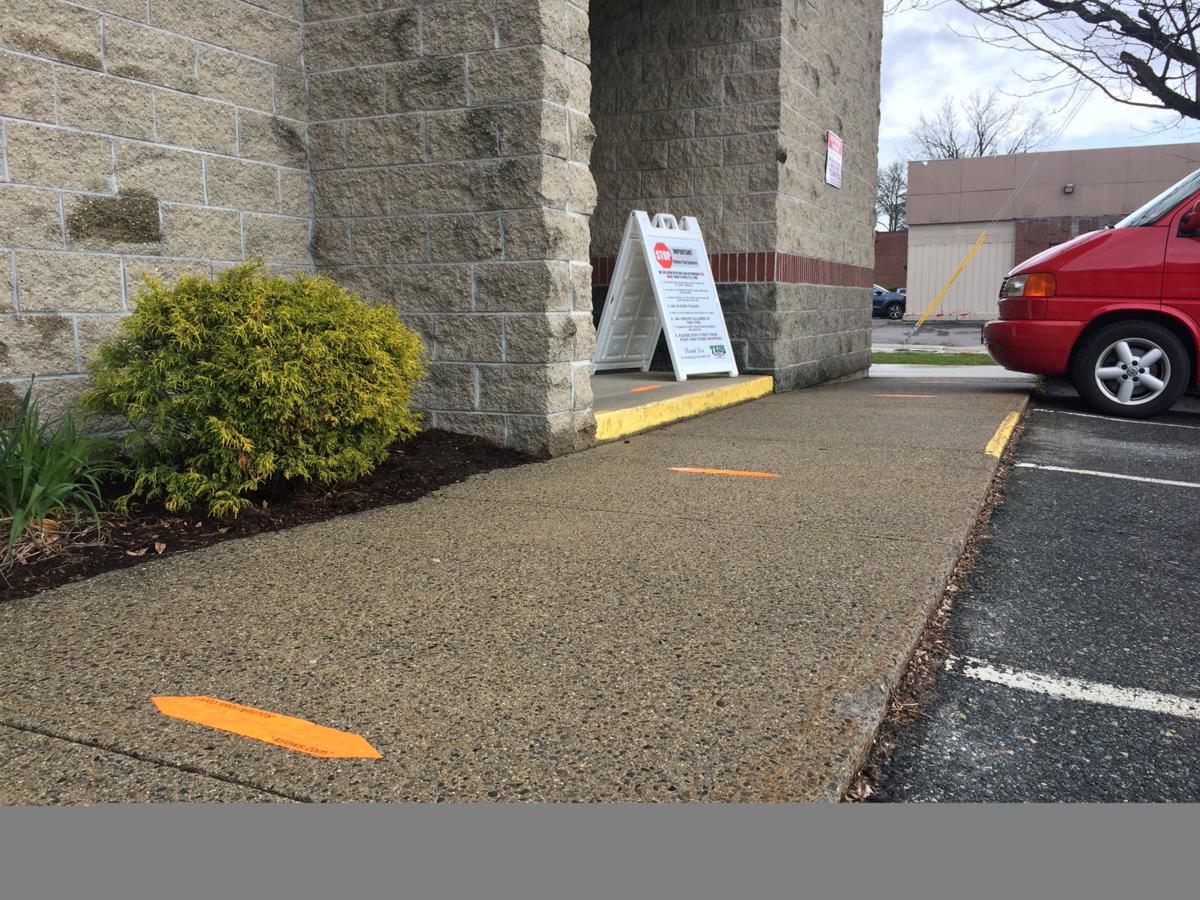 Race-course markings outside Ted's Shoe & Sport in Keene create safe, six-foot intervals in case customers have to line up before entering. The store expects to reopen to limited in-person shopping Tuesday, with new safety precautions. 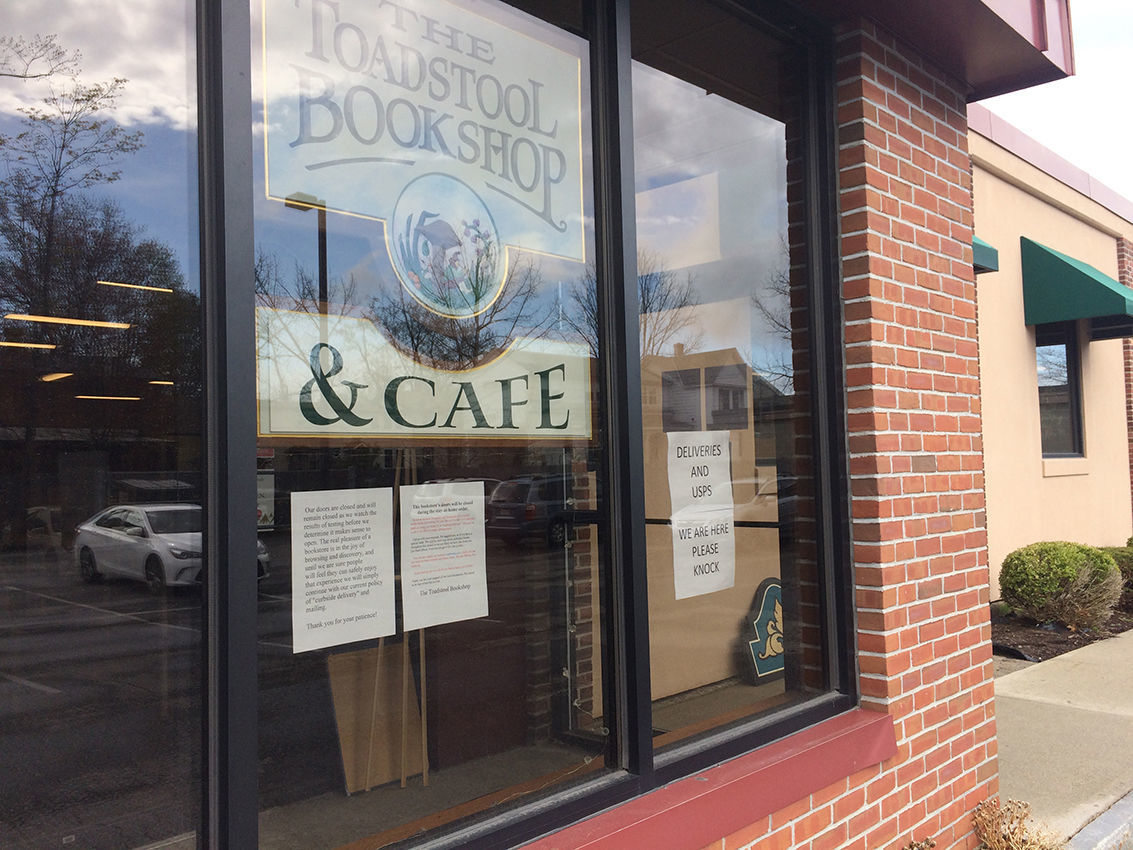 Toadstool Bookshop in Keene is among those Granite State businesses choosing not to reopen yet.

Race-course markings outside Ted's Shoe & Sport in Keene create safe, six-foot intervals in case customers have to line up before entering. The store expects to reopen to limited in-person shopping Tuesday, with new safety precautions.

Toadstool Bookshop in Keene is among those Granite State businesses choosing not to reopen yet.

Some small local retailers are cautiously reopening their doors this week. But the customer experience will be a little different.

“We’re running around in here like crazy, trying to set up our protocols and have everything ready to go for a pretty kind of quiet, soft relaunch tomorrow,” Ted McGreer of Ted’s Shoe & Sport said Monday.

After two months of online sales, “virtual shoe fittings” and curbside pickup, customers will be allowed back in the downtown Keene running store, but only six at a time. They’ll be offered hand sanitizer, encouraged to wear masks and discouraged from touching merchandise.

If the store hits its reduced capacity, customers will be asked to line up outside the back entrance. Bright orange race-course markings have been placed on the sidewalk to create safe, 6-foot intervals.

McGreer said he’s thinking about how to maintain both social distancing and customer service in a business that often involves getting up close and personal with another person’s feet.

“We still want to be able to create that sit-and-fit experience that we’re known for,” he said.

New Hampshire stores were allowed to reopen for in-person shopping Monday for the first time since late March, when Gov. Chris Sununu issued his stay-at-home order closing all “nonessential” businesses. (Some retailers, including grocery stores, were exempted as “essential.”)

While the stay-at-home order remains in effect until May 31, Sununu has announced a series of steps to reopen slices of the state’s economy this month. Retail businesses — as well as hair salons, golf courses and drive-in theaters — were cleared to reopen Monday so long as they follow a set of specific safety guidelines.

Restaurants will be able to resume outdoor dining in another week.

Open doors and “OPEN” signs were visible at several stores along Main Street in Keene on Monday. But others chose to stay closed for now, and both car and pedestrian traffic seemed minimal that afternoon.

The Toadstool Bookshops in Keene, Peterborough and Nashua remain closed to in-store shopping “as we watch the results of testing,” according to a notice in the window of the Keene store.

“Since it’s a place for people to browse, we’d want to make sure that everyone feels safe being in the store,” said Don Luckham, that location’s manager.

Toadstool continues to offer curbside sales and free shipping, and visits to its website have “skyrocketed,” Luckham said.

Jane Gallagher was in her Peterborough antiques store Monday so a customer could pick up something bought over Facebook. But she’s not ready to welcome shoppers back into Grove & Main Antiques.

“I just don’t feel that it’s time yet,” she said, referring to the state’s COVID-19 data. “I don’t see the numbers doing what they need to be doing before we open up yet.”

She also worried about drawing day-trippers from Massachusetts, which is experiencing a more serious outbreak. And anyway, she said, she can’t imagine that many people want to “come and poke around” a store these days.

“The folks that I know in the area here are not ready for that,” she said.

Like Ted’s, Norm’s is taking strict precautions. No more than four people are allowed inside at a time, with a one-to-one customer-employee ratio so the employee can disinfect everything the customer touches.

If a customer tries on a helmet or article of clothing, it is labeled with the date and placed in a back room for days of quarantining. For obvious reasons, the store is trying to discourage too much of that.

“We’re trying to be so specific in finding out their needs, so we can go to the right product for them, and hopefully we’ll nail it with whatever they try on the first time,” Clark said.

Even as they reopened with new precautions in place, both McGreer and Clark admitted they are a little nervous.

McGreer said his store has gotten by with remote sales but needs to bring in more revenue soon. At the same time, he had a strange concern for a merchant — that things might get too busy, especially as some of his customers live across state lines.

Clark likened it to the “unnerving” feeling of getting too close to strangers in the grocery store.

“It’s not mandatory that people wear masks, but we’re asking people to while they’re in our shop, and we prefer it — even working outside with people,” she said. “Because if one of us becomes ill, then the shop will become quarantined, too.”