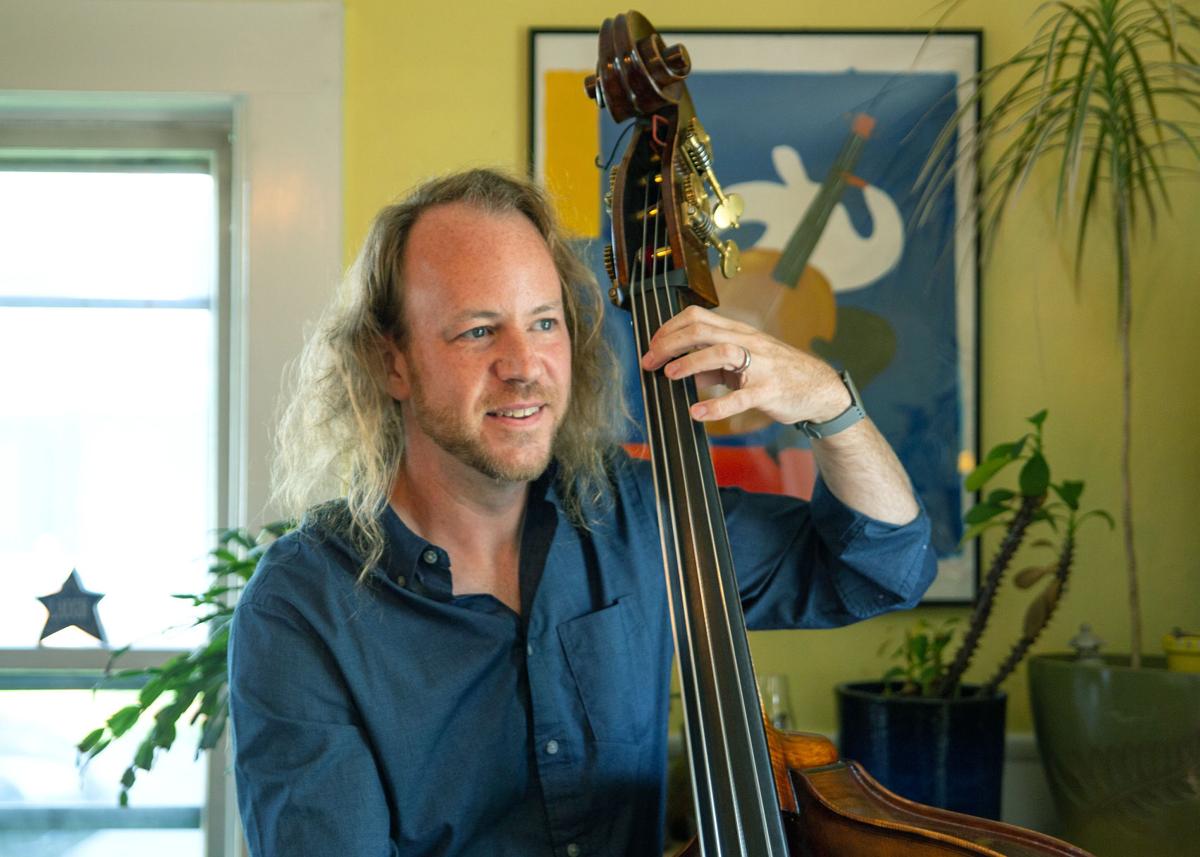 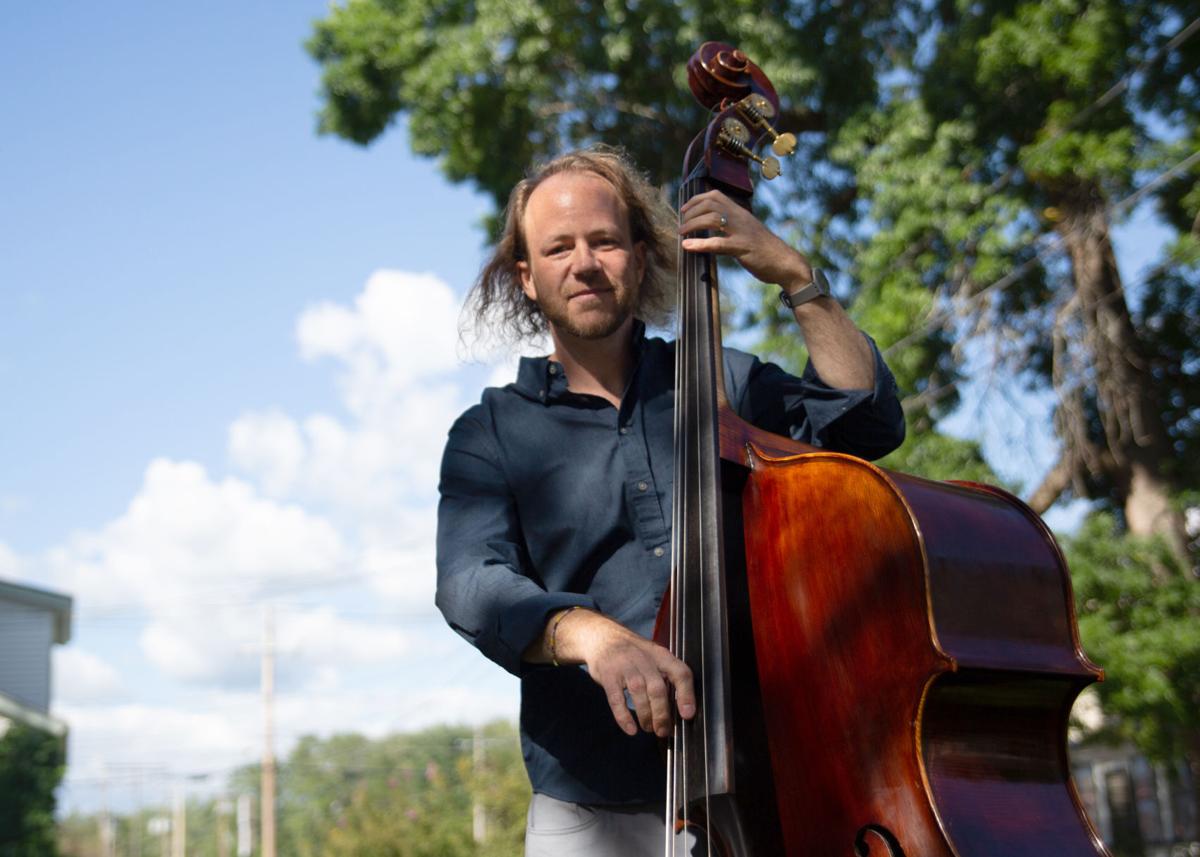 Musician Steve Cady poses plays the double bass outside his home in Keene Thursday. Cady has been playing the bass for 24 years.

Musician Steve Cady poses plays the double bass outside his home in Keene Thursday. Cady has been playing the bass for 24 years.

Dominating the front room of Steve Cady’s Keene home is a standing bass, the lowest-pitched stringed instrument in a musical ensemble, resembling a taller, larger cello.

The affable Cady sits in front of the bass and enthusiastically explains how important playing and teaching music has been in his life and how it was he first became enchanted by it as a child growing up in Wolfeboro.

“My dad played the piano in the house every day on an 1890 McPhail upright piano, then later on a Baldwin grand piano,” says the 42-year-old Cady of his father, Doug Cady, a carpenter and accomplished amateur Dixieland jazz pianist and trombone player who died in 2015.

The youngest of three children, Steve Cady was mesmerized by the sound of his father’s music-making, and by the time he was in 4th grade had joined the school band, playing trumpet.

“When I was in 8th grade, my dad observed that my interests were changing and he was concerned that music might leave my life. He bought me an electric bass for my birthday, an upright bass. I was smitten by them and my musical journey accelerated. I remember my first gig with my dad, I was 14 years old.”

By the 10th grade, Cady had decided that playing and teaching music would be his career.

“My family supported it, there were never any comments like ‘Well, aren’t you going to get a real job’ or that kind of thing,” he says. “And, I never had any illusions of grandeur of being a rock star, I strove to be a working musician.

“You do need to embrace a certain mindset to enjoy and participate in music and what you plan to get out of it.”

He graduated from Kingswood High School in Wolfeboro in 1997 and enrolled in Keene State College, where he graduated with two undergraduate degrees, in music education and music theory. He later went on to earn a master’s degree in jazz studies from Rowan University in New Jersey.

Shortly after graduating from Keene State, he was hired as a music instructor at Vermont Academy in Saxton’s River, where after 20 years he continues to work, directing its jazz and chamber ensembles and teaching music theory, music appreciation and electronic music.

“I’ve had the opportunity to develop and grow a performing arts program there,” he says, seeing some of his students continue on to careers as professional musicians.

Cady emphasizes that it’s crucial that budding musicians find mentors they can emulate and says his own musical journey demonstrates this, in the person of the late Scott Mullett, a noted national jazz performer and educator from Keene who died in 2018.

“I met Scott when he came back to Keene to take care of his father. He was a true musical giant,” he says, “and a best friend.”

Mullett was renowned for his expertise as an improviser and interpreter of the Great American Songbook and toured and performed with Tony Bennett, Aretha Franklin, Lionel Hampton, Rosemary Clooney, Mel Torme, Donna Summer, The Temptations and other groups.

“He showed me the real guts of being a good musician, how to live as a musician. Most of the coolest gigs I’ve done all involved Scott.”

In 2003, Mullett formed his own group, the Scott Mullett Trio — Cady playing bass — and the Keene Jazz Orchestra, a community ensemble that includes both professional and student musicians and which hosts an annual Winter Swing Dance and Spring Jazz Concert. Cady took over from Mullett and is now director of that orchestra, as well as directing the Jazz Ensemble at Keene State College.

Cady performs with professional groups throughout New England and highlights of his career as a bassist include performances with the “Rat Pack is Back” and “The Crooner and the Dame” Vegas Reviews. He’s worked with Joan Rivers, Lorraine Bracco, Steve Schirripa, Tony Sirico and Emmy award-winning Broadway performer Lillias White. He has also performed at the Montreal Jazz Festival and the Palace Theatre in Manchester.

“I’ve always been a side man,” he says, “side man” jargon for a professional musician hired to perform live with a solo artist or with a group in which they are not a regular band member.

He often performs with Eugene Uman, artistic director of the Vermont Jazz Center in Brattleboro, and George Robinson, a jazz drummer in Keene.

“I’ve been able to do hundreds of side gigs all over New England,” he says, in what are called “GB” bands, for general business, meaning they perform for a wide variety of events ranging from wedding receptions, theater engagements, to gigs in restaurants and bars.

Being able to keep so many different commitments in play requires discipline and a highly regulated schedule, he says.

“I’m an organized person, I stay on top of all my details, next week I might have seven different band rehearsals.”

Despite that busy workload, Cady says he never tires of teaching music, or performing.

“I’ve enjoyed it ever since that first time I got paid to play music and realized that you can make a living and do something you really love. I have a hard time turning down a gig.”

Practice, of course, is a crucial ingredient in any musician’s life, he says.

“There are a handful of great musicians who practice eight hours a day, every day. For them, it’s an addiction and necessary element of getting to that level.” However, he emphasizes that for himself and his students, practice should never become so onerous as to turn into an unwelcome chore.

“As a teacher, I’m careful that practice not become a tortuous experience. For me, I love it but I’m very aware that it be joyful and happy.”

Cady says, too, that his musical acumen isn’t limited to jazz.

“I love heavy metal, electronic music, punk rock. I would play any genre.”

Cady says that for him, music has been a life-long blessing.

“I really feel lucky, I’ve had so many wonderful musical opportunities and I hope that keeps going.”

At a glance: Steve Cady