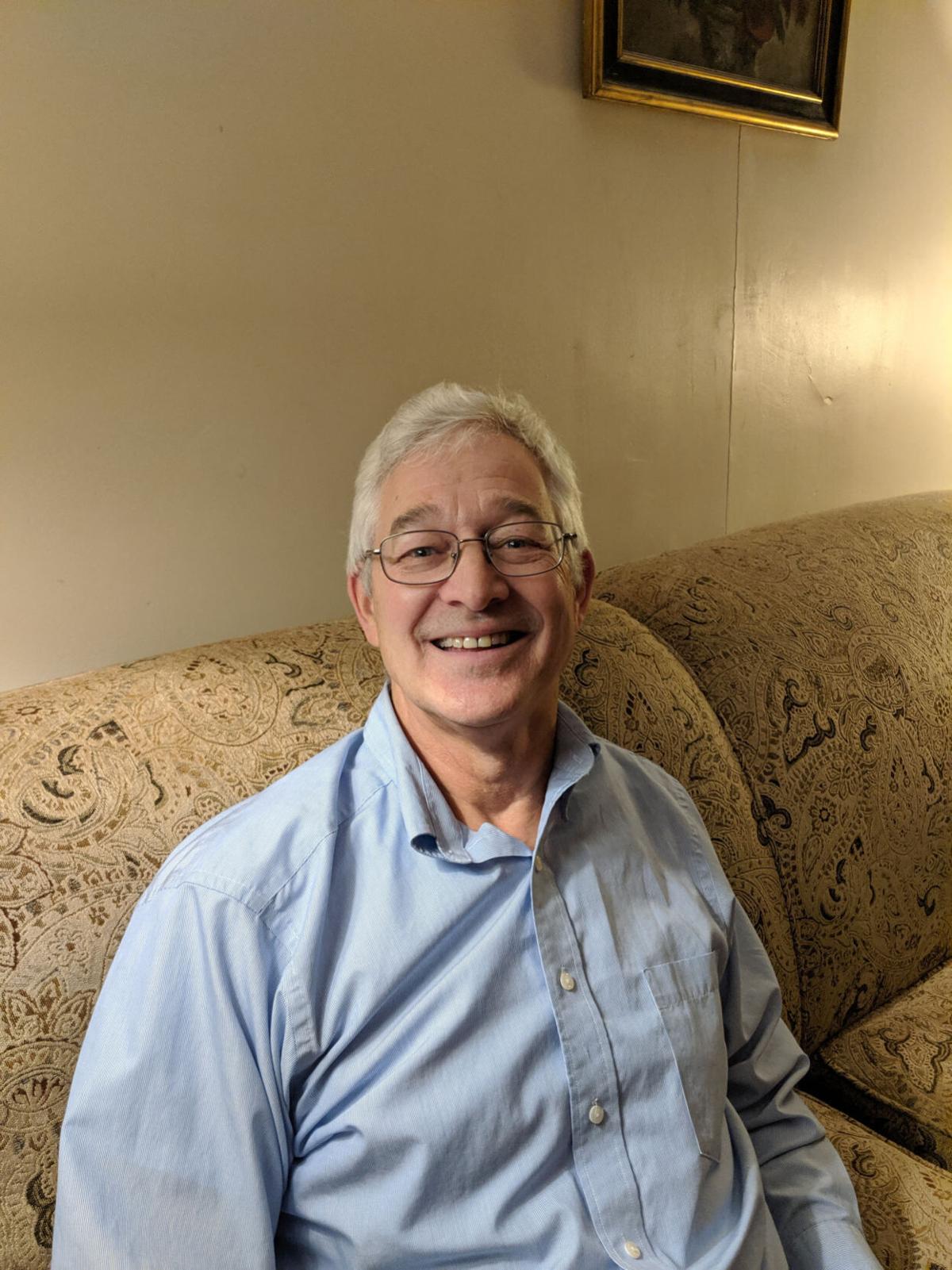 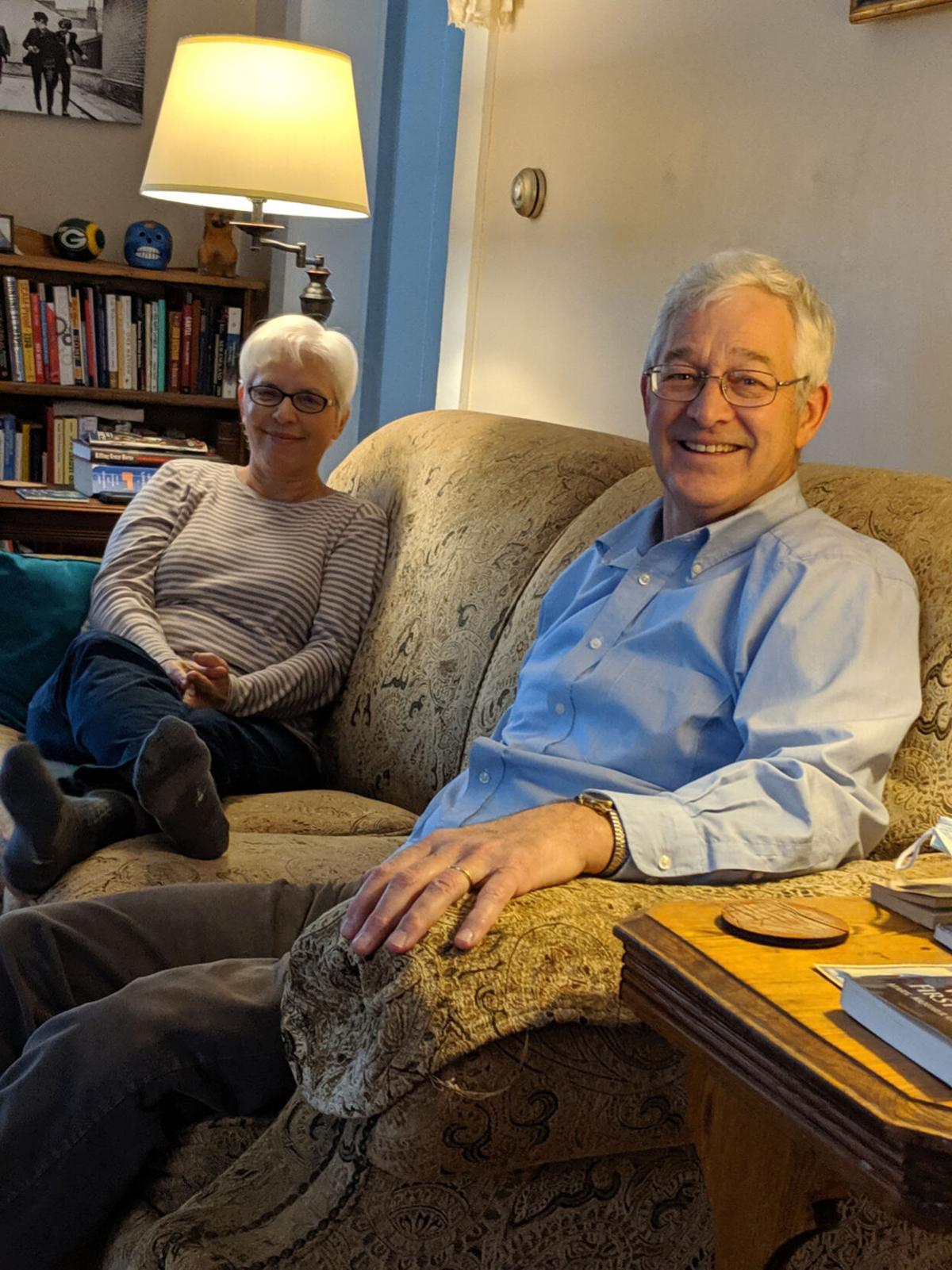 Peter Griesbach and his wife, Linda, relax at their Keene home. The two laid down roots in the Elm City after a chance encounter at Bretwood Golf Course led to a job opportunity for Peter with local dentist Erwin Adams. 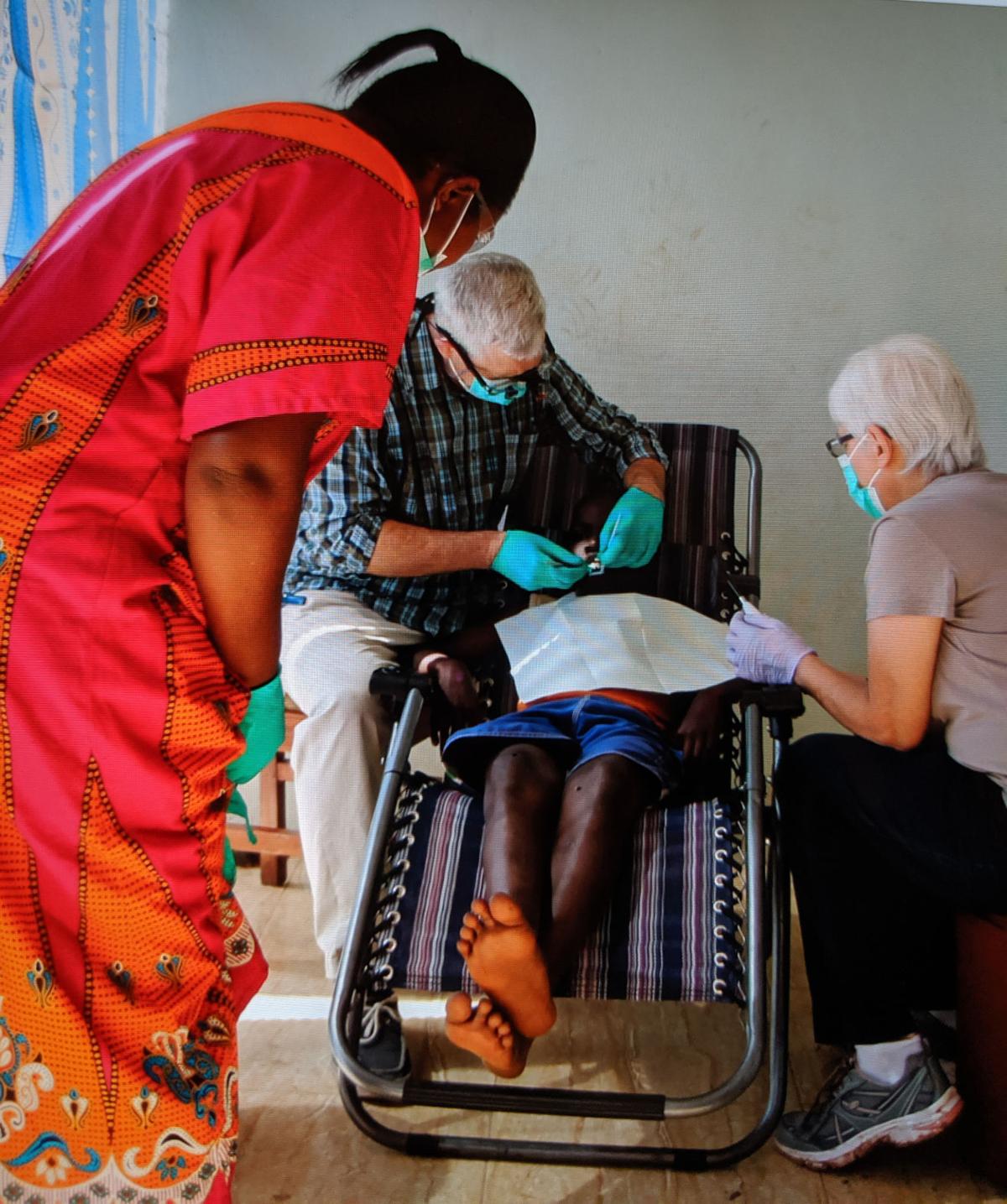 Peter Griesbach, assisted by his wife, Linda, does dental work on a child patient in 2017 in Bucundura, Uganda. The Griesbachs are on the board of AfriCan Educate, an initiative started by Fr. Robert Tumwekwase. The nonprofit organization is building a school and nursery in Bucundura, Tumwekwase’s hometown.

Peter Griesbach and his wife, Linda, relax at their Keene home. The two laid down roots in the Elm City after a chance encounter at Bretwood Golf Course led to a job opportunity for Peter with local dentist Erwin Adams.

Peter Griesbach, assisted by his wife, Linda, does dental work on a child patient in 2017 in Bucundura, Uganda. The Griesbachs are on the board of AfriCan Educate, an initiative started by Fr. Robert Tumwekwase. The nonprofit organization is building a school and nursery in Bucundura, Tumwekwase’s hometown.

There is just something about Peter Griesbach that makes you want to smile. Maybe it’s his own smile, welcoming and honest. Or perhaps it’s his explosive laugh, or his earnest manner, his ability to carefully listen to whoever is speaking and respond with a precise selection of words.

That’s appropriate, really — the smile part, especially — for a man who has just wrapped up a 42-year career in dentistry, four decades of it taking care of patients in the Monadnock Region.

“Let’s see now; how many patients have I treated over the years here,” he says to himself, taking a moment to think about it. “Well, thousands, really. Yes, of course, thousands.”

Now 68, the Keene resident reflects upon his long career and the elements of his life that combined randomly to place him here and now, speaking on matters both big and small.

His story begins in Milwaukee as the fifth of 12 children of Marc and Mary Griesbach, his father a professor of philosophy at Marquette University, his mother a high school English teacher.

It was a very busy household, naturally, with so many in the family. The eldest, a brother Marc, had developmental disabilities and died in 2012. Among Griesbach’s surviving siblings are three lawyers — one a federal judge — a physician, a college professor, two high school teachers and three carpenters. The family remains very close.

“When you grow up in such a big family, you learn to get along, to negotiate,” he says. Another benefit of having so many siblings in different professions is they all serve as in-house experts for their brothers and sisters, he notes.

“I call the carpenters up when something goes wrong in the house, the lawyers for legal issues, the doctor for medical issues, and, of course, I’m the dental expert. In fact, I just got a call because my mother — she’s 96 years old — needs some dental work.” His father died in 2005.

Griesbach attended Marquette University High School, an all-boys Catholic school in Milwaukee, then college at Marquette University, followed by the Marquette University School of Dentistry. All three schools are within blocks of one other on West Wisconsin Avenue and named for Father Jacques Marquette, a French Jesuit missionary explorer who traveled down the Mississippi River and reported the first accurate data on its course.

While in dental school, Griesbach met his future wife, Linda, a student in Marquette’s nursing school.

“I was in a waiting room at the dental school, I had some trouble with a cavity,” she says, “and this guy comes out to get another patient, and I see his nametag — ‘Griesbach’ — and wondered if he was related to Joe Griesbach, who was in the school’s choral group with me.”

It turned out they were brothers, and Linda asked Joe if his brother would treat her for her dental problem.

“Joe told me his brother was looking for patients,” Linda says, and she landed in his dental chair. She ended up asking him to escort her to a Christmas dinner-dance. They began dating.

Upon graduation from dental school, Griesbach got a job treating patients at a clinic in Milwaukee’s inner city. Almost all of his patients were Black and on Medicaid. It was an eye-opening experience for the young man, who was accustomed to a middle-class upbringing in the Milwaukee suburbs.

“I saw a lot of things there that were new to me,” he says.

Now married, and with Linda having graduated with a degree in nursing, the couple began looking for new jobs, focusing on New England because she was homesick for her native Boston.

“We drove up here to check out Maine, Vermont and New Hampshire,” Griesbach says, and considered possible opportunities in Burlington and Manchester, Vt.; Sebago, Maine; and Franklin, N.H.

By happenstance, the couple found themselves driving through Keene on a pretty fall day. As they had their golf clubs with them, they were looking for a course on which to play.

“We stopped at a pay phone — that gives you an idea of how long ago this was — at the old Bradlee’s store here in Keene, and found Bretwood,” Griesbach says.

There, they were matched with two women.

When they explained to the women why they were in Keene, one suggested Griesbach contact her father, a local dentist who was searching for a partner.

Adams was a popular dentist, Griesbach says, nearing the end of a long career in Keene.

“It was like working with my grandfather,” he recalls. “He was an old-time dentist; he did it all. He was fearless; he even performed hypnosis on some patients. I learned a lot from him.” At the same time, Linda started working as a nurse at what was then called the Keene Clinic, now part of Dartmouth-Hitchcock Keene.

In Adams’ day, Griesbach explains, dentistry had not yet branched off into the specialties that exist now. According to the National Commission on Recognition of Dental Specialties and Certifying Boards, there are now 12 types of dental expertise: endodontics, oral and maxillofacial pathology, radiology and surgery, oral medicine, orofacial pain, orthodontics and dentofacial orthopedics, pediatric dentistry, periodontics and prosthodontics.

Griesbach purchased the practice from Adams in 1985, and “went solo,” he says, remaining a single practitioner until he sold his practice to longtime Keene dentist Peter Welnak in late 2018. The practice is now operated by Welnak’s dentist son, Jack.

“I looked for partners during my years in practice, but could never find the right person who clicked with me,” he says.

“The dental community was so welcoming to me,” he says. “And the patients were great.”

The couple raised three children in Keene — two daughters, Tara and Kathleen, and a son, Chris.

For a dentist, Griesbach explains, the key to success consists of two factors — concern for patients, and a dedicated staff.

“Employees are so important to a dentist,” he says. “They’re the people who make or break you. I was so lucky to have such great people. They were very caring with the patients. As you’d expect, many people experience fear and dread coming to a dentist, and it is the employees who set the tone to maintain an environment that calms the patients.”

Dentistry had some hassles, Griesbach admits, first among them meeting payroll for himself and seven employees. Also, the long hours spent on his feet.

His routine was to start working at 8:15 a.m., first reviewing that day’s patients and briefing himself on cases he’d be addressing that day. “Of course, people are always coming to you with various issues, and the pressure comes from knowing you have to keep a schedule,” he says.

“You become a dentist, and you become a perfectionist. When things don’t work as you like, it wears on you. You strive to do the best, but in health care, as in life, things don’t always work out the way you like. The human body is highly complex, and everyone is so different. But by and large, I really enjoyed dentistry. It was fun.”

It was a difficult decision to sell his practice, Griesbach says, but his age coupled with a desire to “open up opportunities” for younger dentists made it easier.

He stayed on with Welnak Dental for several months during the ownership transition and continued to practice after that, treating people experiencing homelessness both in Keene and Concord until this spring and the onset of COVID-19.

“If it weren’t for the virus, I’d still be doing that,” he says.

Besides practicing dentistry, Griesbach has participated in a number of volunteer efforts, among them working with inmates at the Cheshire County jail when it was in Westmoreland, leading sessions where inmates could talk about spiritual matters.

He and Linda are members of St. Margaret Mary Catholic church in Keene, part of the Parish of the Holy Spirit. He is also a member of the parish chapter of the Knights of Columbus, and a volunteer at Hundred Nights homeless shelter.

In addition, both he and Linda are on the board of AfriCan Educate, an initiative started by Father Robert Tumwekwase, a Franciscan priest who served for a couple of years as an associate pastor of St. Bernard Church in Keene. The nonprofit organization is building a school and nursery in Bucundura, Uganda, Tumwekwase’s hometown.

Although busy with his various activities, Griesbach says it’s taking time for him to adjust to his new life, one without treating patients.

“I miss my patients; I miss my employees. But I was so lucky here,” he says. “I’m grateful to have had the opportunity to practice in such a wonderful place.”

At a glance: Peter Griesbach