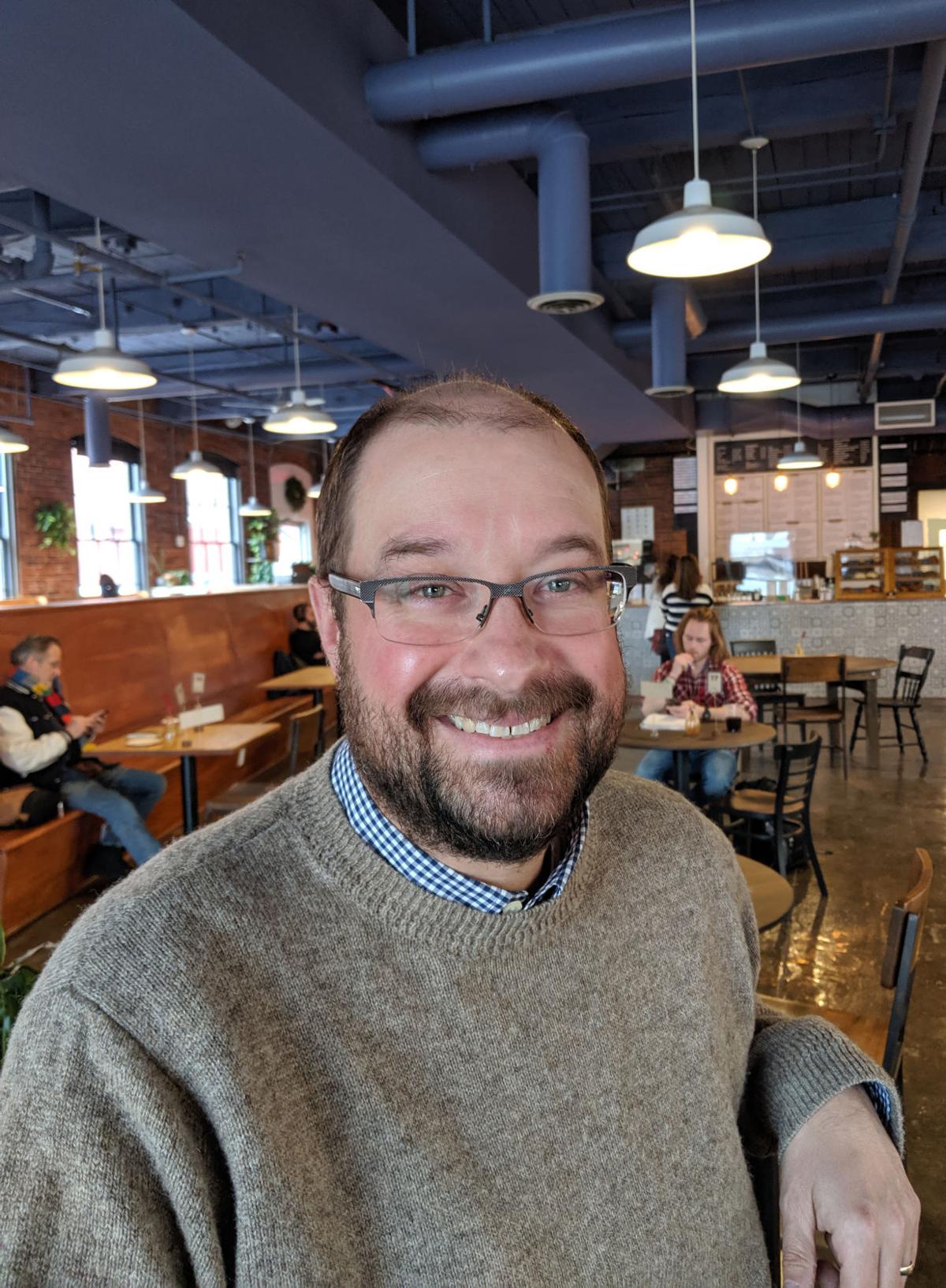 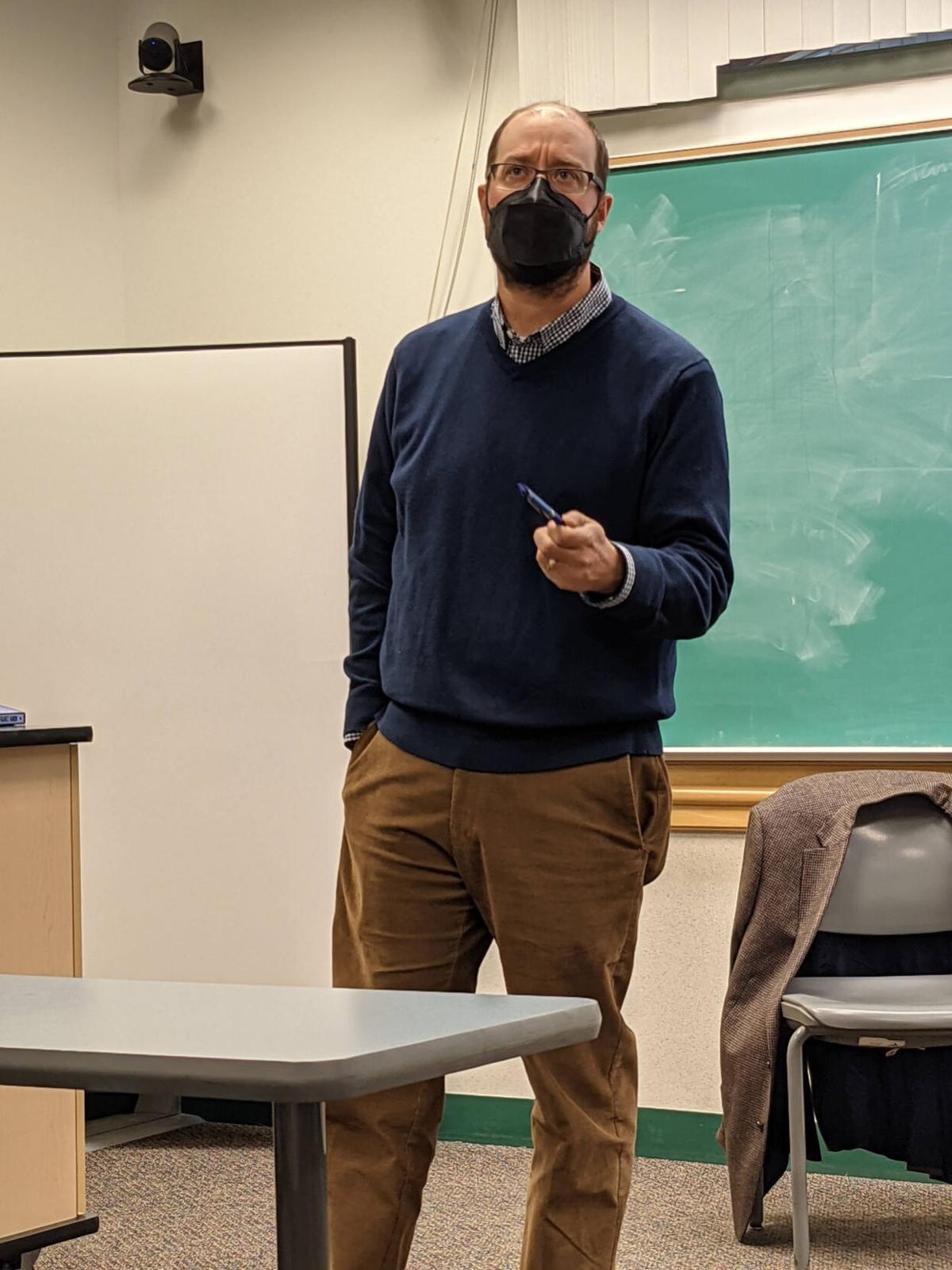 Nick Germana, professor of history and philosophy at Keene State College, leads a class Thursday. He says his objective is to teach and encourage students to adopt critical-thinking skills that will enable them to develop their own answers to the complex issues and problems they’ll face in life.

Nick Germana, professor of history and philosophy at Keene State College, leads a class Thursday. He says his objective is to teach and encourage students to adopt critical-thinking skills that will enable them to develop their own answers to the complex issues and problems they’ll face in life.

It’s the kind of spring morning where the cool temperatures of winter linger, the winds blustery and the sky cloudy, threatening rain. Nick Germana walks into Brewbakers Café on Emerald Street in Keene, shakes the chill off, and orders a cup of coffee.

The 45-year-old Keene State College professor of history and philosophy sits at a small table and removes his COVID mask.

A conversation ensues that will, in the next 2½ hours, include German philosophers from the 18th, 19th and 20th centuries, baseball, the rise of Nazism, the origins of creativity, the Trump presidency, running marathons, public intellectuals, working in the Yale University bookstore, the value of mentors and first-generation college students.

He relishes free-range conversations about ideas, and it shows.

“I love talking with people, especially people who are passionate about different subjects,” he says.

“I think it’s very important that academic historians not retreat into towers,” he says. “I didn’t come from an academic background, so I don’t see academia as something separate from society. We academics do a disservice when we just segregate ourselves.”

In addition to carrying a full teaching load, Germana has practiced what he’s preached by leading courses on philosophy and history for the past five years in Keene State’s Cheshire Academy for Lifelong Learning (CALL), and giving public lectures through KSC’s Open College Program.

Also, this year he received the college’s prestigious Faculty Distinction and Scholarship Award, his nomination describing him as a “skilled and rigorous scholar doing important work that will have an impact well beyond his own discipline.”

Germana’s research has focused on German nationalism and what is called German “Orientalism,” and he teaches various courses on European intellectual history and the history of women in Europe. His latest book, “The Anxiety of Autonomy and the Aesthetics of German Orientalism,” explores the reception of Indian and Chinese philosophies and religions in the tradition of German thought from Immanuel Kant to Hegel.

Although that may sound arcane or esoteric to many, Germana’s style of explaining his thoughts is conversational, easily understandable and relatable to contemporary issues. He is neither pedantic nor bigfoots a dialogue.

“I got my love of history from my grandfather,” he says, of Anthony Germana. “He was only a high-school graduate, but a big history buff.”

A highly decorated World War II veteran, having served as a medic in the European theater, “my grandfather felt that to be an American and love your country, you should know its history.”

Germana’s father, Richard, and his late mother, Kathleen, emphasized the importance of education, and provided a world filled with books in the home where he was raised in Waterbury Center, in central Vermont northwest of Montpelier.

As a youngster, he was fascinated by the world of ideas.

“I was just a curious kid,” he says. “I thought about such things as why are we here?”

In high school, he began to pore over books about philosophy and pondered the world and its many mysteries and conundrums. He also played plenty of baseball, developing a lifelong love of athletics that includes running marathons and playing indoor soccer.

“I was exceptionally competitive,” he says. “I was attracted to that hyper-competitiveness of sports, the ‘Charlie Hustle’ of Pete Rose. I also began to read the biographies of sports figures. Hank Aaron, the Negro Leagues, Babe Ruth and the Great Depression.”

He aspired to be a high-school history teacher, and enrolled in Keene State College. He met his future wife, Leslie, there and graduated with a degree in history in 1997. The couple has three children.

While at Keene State, one of his history professors, Andrew Wilson, proved to be a huge influence on his life.

“He was my teacher, my mentor, and now he’s my colleague. He gave me the confidence and skills I needed to continue my education.”

Germana emphasizes that it’s key that young people have mentors, to serve as role models and encourage their aspirations.

Shortly after graduation, he and Leslie married and moved to Connecticut to be near her family. Germana got a job at the Yale University bookstore on campus in New Haven, a job he describes as a perfect match for him.

“It was great because I love books, and I loved being steeped in the academic environment there.”

He briefly flirted with the idea of attending Yale Divinity School, and was accepted. Instead, he switched directions and enrolled in a graduate program at Boston College, where he earned a doctorate in modern European intellectual history.

In 2006, the couple moved to Keene, when he was hired by Keene State as a lecturer. The following year, he was hired full-time as an assistant professor of history and was promoted to full professor in 2014.

Germana says his objective with students is to teach and encourage them to adopt critical-thinking skills that will enable them to develop their own answers to the complex issues and problems they’ll face in life.

That’s even more important today, he says, in a polarized political world with an almost infinite supply of information readily available online — much of it suspect.

“Everything is more complex than they appear at first; things happen for a lot of reasons. And politicians are always telling us that there are simple solutions.”

Coupled with this is a strain of anti-intellectualism in American culture, he contends, dating back to the Jacksonian era.

“I think the Republican party has engaged in this movement, as they have embraced Trumpism,” he says.

“There’s a growing disdain for expertise. Look at climate change, look at COVID. People want simple answers, except in subjects that they know well.”

Germana also fears that a lack of knowledge about history puts our society as risk. For example, he says the four years of the Trump administration in some ways reflected trends in the nationalism that overtook Germany between the two world wars, giving rise to Nazism.

He also says many Americans fall prey to false narratives spread by the media.

“There are a lot of people shaped by the media sources they consume,” he says. “It’s really appalling, their sources of information.”

Conversely, Germana bemoans the current situation in the United States where people make spot assumptions about others, simply based on their political opinions.

“Everything is just so political,” he says, but he argues that if people channeled their frustration into helping others, it might alleviate some of the tension, and give them the opportunity to rub shoulders with those who may be of a different political persuasion. It would help them get to know them as people, not stereotypes.

“When you work with others, you find out they are much more than just their politics,” he notes.

Germana says he has done that himself. Instead of stewing about the state of American politics, he joined the Catholic men’s group the Knights of Columbus, and began working at the free breakfast offered at the Keene Unitarian Universalist Church.

“I had an upbringing as a Catholic, and I’ve always been very religious,” he says. He moved away from the Church and became a Buddhist but has now re-embraced the Catholic faith.

“It is not that I believe all the dogma, but I feel very connected to Catholicism. Being at mass gives me a feeling that I don’t get anywhere else.” He’s a big fan of Pope Francis.

Germana also points to Kant, perhaps the greatest of the German philosophers — and the subject of one of the courses he teaches — as perhaps someone to emulate.

“His was a very aspirational view of humanity in the sense that we should strive for moral perfection,” he explains. “It’s impossible to achieve, but we should still strive toward it.”

At a glance: Nick Germana