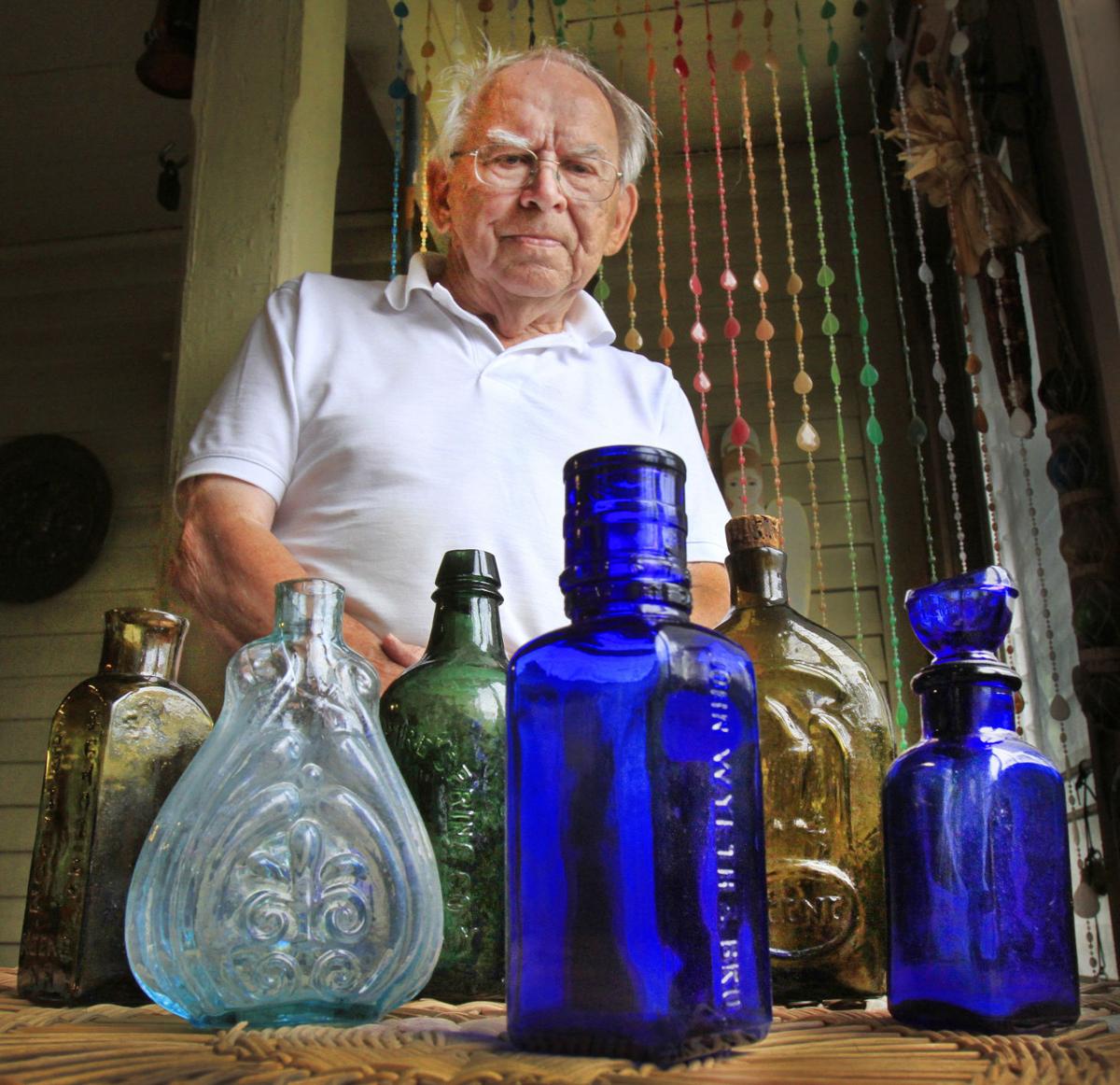 Creighton Hall, of Keene, with just a few of his antique bottles. 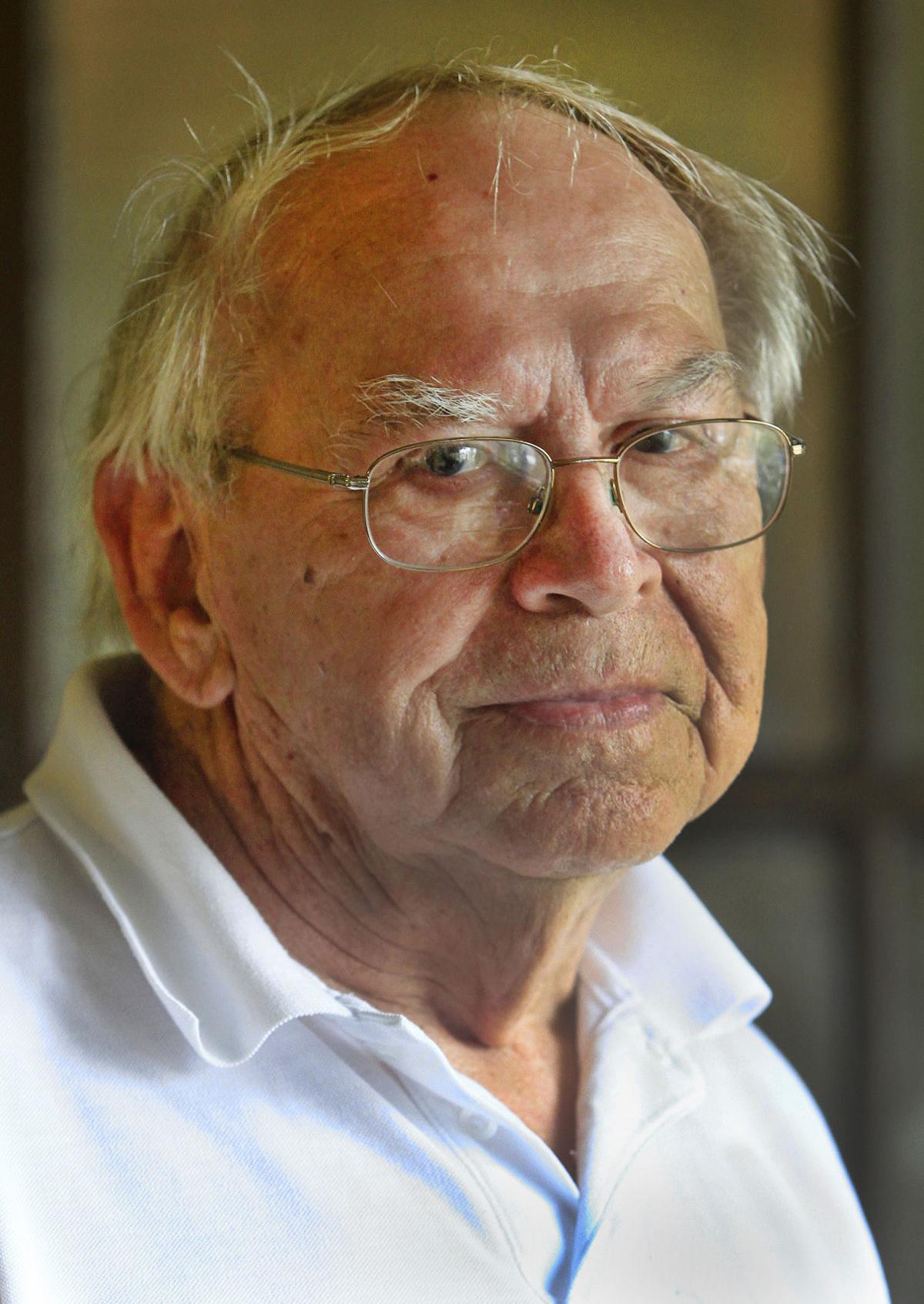 Creighton Hall, of Keene, with just a few of his antique bottles.

Creighton Hall sits comfortably in an easy chair at his home in Keene and cradles a small, smoky-colored glass bottle.

“There’s a story to this bottle,” he says. “It all starts back in the 1960s when a clothesline broke in our side yard.”

That’s a lead-in that cries out for an explanation.

The 91-year-old Keene native continues, telling a tale that illustrates how deeply he’s tied to the city’s history, both through his ancestors and living through it himself, as well as his interest in collecting antique glass bottles.

“Every Saturday, my wife hung the laundry on a clothesline outside. One of its posts broke, and she asked me to build a new one.”

With shovel in hand, he began to dig a new posthole and several minutes later uncovered what looked like a sizeable shard of glass. He examined it and found the words “KEENE NH” embossed on one side.

He showed his wife, Alene, the object. She was intrigued and asked to take over the digging, a task he said she performed with great enthusiasm. She expanded the hole in the ground, kept digging and eventually found hundreds of pieces of glass and several complete bottles. Some had the words “BOOT BLACK” embossed upon them.

They contacted someone who knew about antique glass and after doing some research on their own, discovered that the property next to theirs had once been the site of a cobbler’s shop, dating back to the mid-1800s. The structure had been torn down to make way for the Church of the Nazarene on Court Street, which is now a residence, the present church having relocated to Maple Avenue.

Creighton took one of the bottles to an auction. “I thought maybe I could get a couple bucks for it,” he says. “To my surprise, it ended up selling for $30.”

A few days later, word got out that the couple had found a cache of Stoddard Glass. “One morning there was a line of guys waiting outside on our porch, wanting to buy the glass.”

He quickly realized they had value, and later discovered that the bottle he’d sold at auction for $30 eventually fetched $5,000.

Bottles and other glass from Stoddard Glass, which closed in the 1870s, are now very rare and highly valued by collectors. Keene glassblower Joseph Foster purchased the tools of a glass-making company in Keene that folded in 1842, and he set up shop in Stoddard, an operation that would last for 31 years and consist of five factories employing hundreds. It produced common utilitarian bottles that were shipped throughout the country.

Finding the bottles and fragments also led Hall to join the Yankee Bottle Club, which had been organized by local residents in 1968, and which meets monthly at the Historical Society of Cheshire County on Main Street in Keene. The club hosts a popular antique glass show in Keene every year, drawing hundreds of collectors from around New England. (This year’s show was cancelled because of the Covid-19 pandemic.)

The glass discovery also sparked in Hall an interest in the history and lore of Keene, appropriate for a man who is a fourth-generation Elm City native, his forebearers having arrived about the same time that the glass companies were active here. One of his great-grandfathers helped build the Stone Arch Bridge on Court Street, and a grandfather had worked at the Keene Glue Co. on upper Court Street, which had a long and somewhat malodorous reputation in the city.

“Every day they would go down to the train station and pick up the horse hides and hooves and take them up Court Street,” he says. According to one of the histories of Keene, “The Keene Glue Company … needs no further introduction to anyone who ever passed that way when the wind was blowing … The concern ceased operations about 1933, but its dried animal glue was long prized by cabinetmakers as something of a classic adhesive.”

Hall was born at the old Elliot Hospital on Main Street, the son of Harold and Lucille, he a housepainter, she a homemaker. He grew up on Woodbury Street just off Washington Street, which at the time was still mostly farmland.

“Keene was a quiet town,” he says. “At the time there were three movie theaters here, and every Saturday we went to one of them. Eleven cents got you in the door.”

Coincidentally, his parents named him Creighton after an old silent-movie matinee idol, Creighton Hall, who didn’t fare well with the dawn of the “talkies” and died in obscurity in 1965.

He attended the long-since closed Roosevelt Elementary School until grade 6, then moved on to Franklin School for seventh and eighth grade, then on to Keene High School, where he graduated in 1947. Two weeks after commencement, he joined the United States Navy, where he served for five years as an electrician’s mate on two different aircraft carriers, the USS Kearsarge and the USS Block Island.

Back home in Keene on one of his leaves from the Navy, a friend fixed him up with Alene Willard, whom he would eventually marry. The couple raised five children. Sadly, she died in 2017. Hall makes it a point to visit her grave daily at Monadnock View Cemetery.

After his stint in the Navy, Hall began a three-decade career in the assembly department at American Optical in Keene, which manufactured sophisticated precision optics for both the military and industry. He left in 1984 when the company closed, and then started a house-painting company, which he ran for the next 15 years.

“Dad always painted houses,” son Darren Hall, who lives with his father, says. “He worked during his days off on Saturdays and all of us kids helped him. Sunday was the day we’d all go for a ride; we visited every town in the area.”

Creighton Hall maintains that he’s reached his advanced age in good health because he’s stayed busy with his hobbies, which include collecting model trains as well as glass bottles. He also is an avid golfer, and continues to play once a week with his friend, 94-year-old Wendell Pollack, who incidentally at age 92 was the oldest participant in the Super Senior DeMar Race two years ago. During the off season, Hall bowls regularly.

And Hall continues to search for more antique bottles and glassware, relics of bygone eras. “They’re here,” he said. “You just have to find them.”

At a glance: Creighton Hall