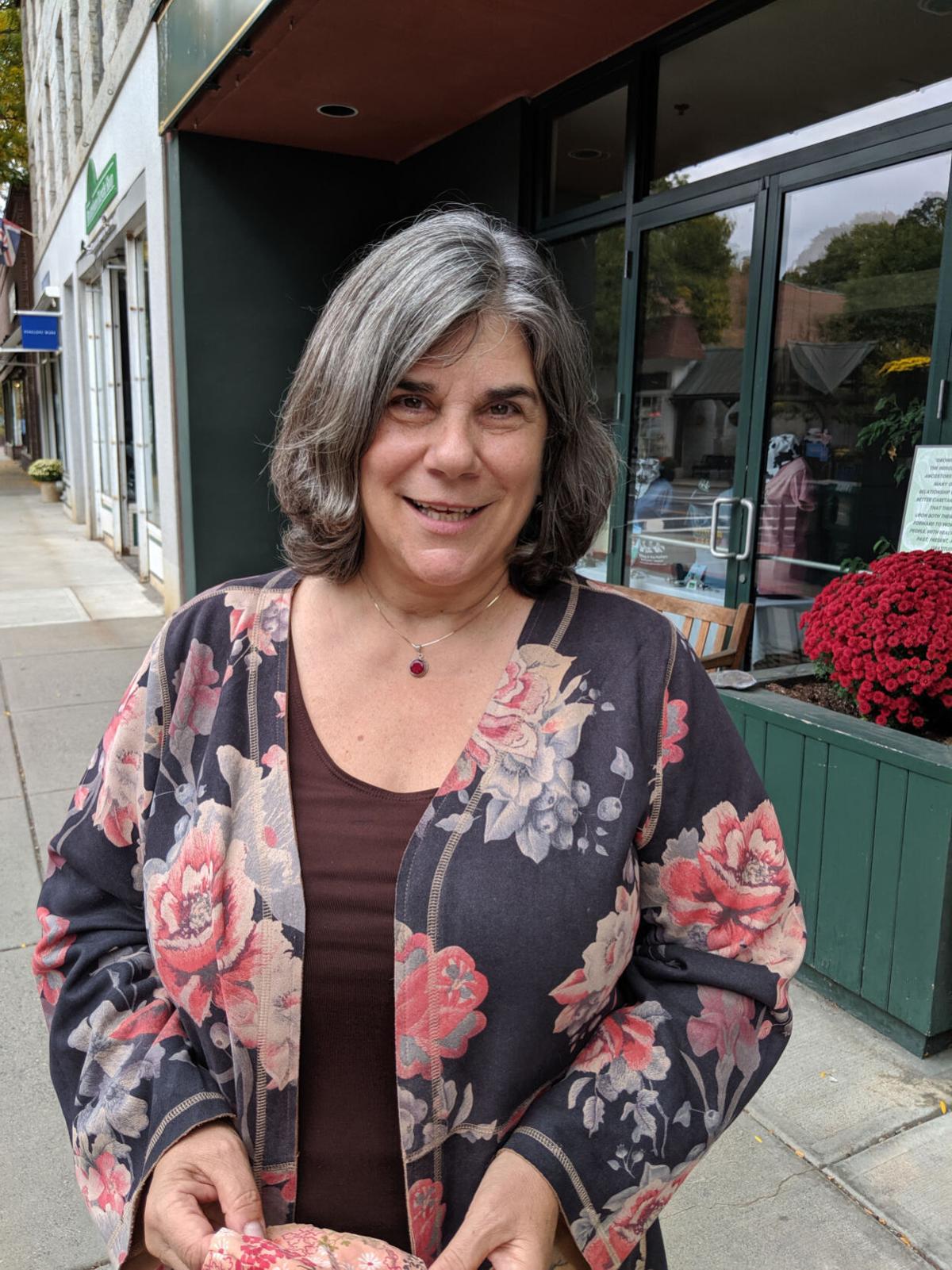 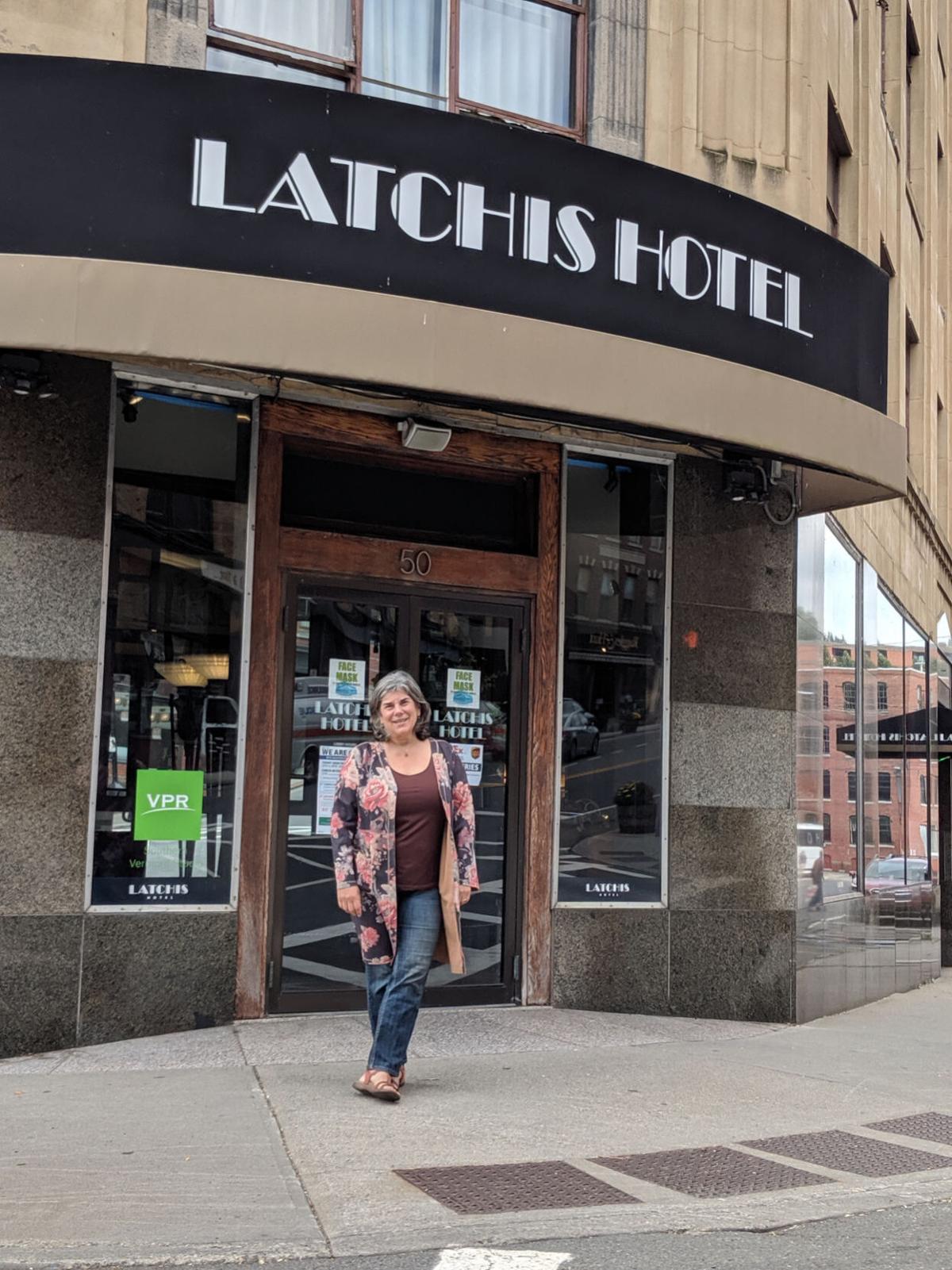 Anne Latchis outside the iconic Latchis theater and hotel, hallmarks of downtown Brattleboro since 1932.

Anne Latchis outside the iconic Latchis theater and hotel, hallmarks of downtown Brattleboro since 1932.

BRATTLEBORO — Anne Latchis sits on the outdoor back patio of the River Garden community center, overlooking an expansive view of the Connecticut River, and speaks about her childhood in the town where she’s spent most of her life.

“I felt a little gifted; I was the only kid who had free movies for life,” she says, referring to the fact that her family started the art-deco Latchis theater and hotel, hallmarks of downtown Brattleboro since 1932.

“I played there, I worked there, I had my 10th birthday there, a sleepover. I had the world, and I had good friends. Still do,” says the 63-year-old, who exudes a friendly and gregarious nature.

Latchis is the general manager of Strolling of the Heifers, the name of both an organization and the signature annual event in the heart of Brattleboro, in which dairy cows do exactly as its name indicates. But it’s much more than just a parade; it’s also a nonprofit that promotes innovation and entrepreneurship for area agriculture and supports the development of local farm-to-table products. Its offices are housed in the River Garden.

Latchis’ roots in Brattleboro run very deep. Her great-grandfather, Demetrius Latchis, emigrated from Greece in the early 1900s and began selling fruit from a cart, later opening a storefront market in a building that once stood at the present site of the Brattleboro Food Co-op. He had seven sons, and all of them teamed up to build the Latchis Memorial Building on Main Street in 1932, in their father’s honor. It featured a hotel, restaurant, shops and a 1,200-seat theater with hand-painted murals based on Greek mythology and a midnight-blue ceiling with the 12 signs of the zodiac. The family also owned and operated a chain of 14 theaters in New England, including one in Keene.

Anne is the granddaughter of one of Demetrius’ sons, Spero Latchis, and the daughter of 89-year-old Peter Latchis, the former owner of the theater and hotel, who lives in Brattleboro.

“Back then they didn’t call them entrepreneurs,” she says, “they just called them immigrants.”

Growing up in Brattleboro was all about neighborhood, she says. “You only knew the kids from your own school. It was a very mainstream childhood.”

After attending elementary school in town, she was enrolled in the prestigious residential St. Paul’s School in Concord, in the first coed class in 1971. After that, she graduated from the University of Vermont with a degree in sociology and from there earned a certificate as a paralegal with a specialty in juvenile law from Woodbury College in Montpelier. Woodbury later merged into Champlain College in Burlington.

After working a couple of years in the legal field, in 1983 she lit out for California with a girlfriend. “In a pink 1965 Rambler, we zig-zagged across the country for five weeks on the side roads,” she says, laughing as she recalls the off-beat adventure.

Arriving in San Francisco, she met an old school friend for lunch, who just happened to bring along her boss, a vice president at Wells Fargo bank. “I had no job; I was in my mid-20s. They were just starting a customer service department to handle complaints, and they were looking for someone who could deal with irate people, who could calm them down. I told him I could do that.”

She was offered the job and stayed there two years, when she says, somewhat facetiously, the Latchis family laid a “guilt trip” on her and summoned her back to Brattleboro in 1985 to help rescue the hotel and theater, which had fallen upon hard times and required a complete restoration. The hotel and theater remained in the family’s hands until 2003, when it was sold to a local nonprofit, the Brattleboro Arts Initiative. The building sustained considerable damage from Hurricane Irene in 2011, but was reopened later that year. In 2013, it was further restored through a half-million-dollar fundraising campaign. It now features four separate theaters and a boutique hotel that attracts visitors from throughout the United States.

Back in Brattleboro in the mid-’80s, helping her brother, Spero, restore the theater and hotel, she met Alan Eames, who’d just opened a tavern in town. “I heard they had Guinness on tap, and I wanted to see who had brought this bar to town,” she says.

Eames was much more than just a tavern owner, it turned out. He was a highly regarded worldwide expert on the history of beer, and a proponent of what decades later would become the craft-beer movement. He had started the famous Three Dollar Deweys tavern in Portland, Maine, and had opened a bar with the same name in Brattleboro. He also wrote “A Beer Drinker’s Companion” and “The Secret Life of Beer!” National media, including The New York Times and The Boston Globe, referred to him as the “Indiana Jones of Beer.”

The two met, fell in love and married.

On their honeymoon in Rio de Janeiro, two significant events occurred in Latchis’ life. First, she almost drowned while swimming in the ocean, caught in a strong riptide and carried out to sea. Although a strong swimmer, it had overtaken her.

“My husband was back in the hotel room, napping,” she says. She panicked, but two men on the beach saw her plight and rescued her.

Second to the near drowning, her trip to Brazil was her introduction to the beer business, in the form of an obscure beer her husband was investigating by the name of Xingu — a black beer brewed by the indigenous people upriver on the Amazon from the city of Manaus.

In 1986, the couple duplicated the recipe, substituting roasted hops and barley for chewed-and-roasted manioc. That same year, Latchis formed a company to be the sole distributor for Xingu in the United States. Working from her home in Brattleboro, she marketed, promoted and distributed the beer until 2003 when the brand was bought by Eurobeer, after which she became a sales representative for that company. In 2016, she quit the beer business when Xingu was sold again to another company.

“I was looking for a job, and Orly Munzing asked me if I’d like to work for Strolling of the Heifers,” Latchis says. Munzing had begun the operation in 2002, with the first parade designed to raise awareness of the many challenges faced by the small farmers in Vermont. Munzing had recently visited Pamplona, Spain, site of the famous “Running of the Bulls” festival, and envisioned a slower, friendlier, female version of that event with a clever name — the Strolling of the Heifers.

It was a good fit, Latchis says, because of several factors. They included her vast knowledge of Brattleboro, her many friends and contacts, and her long family history of entrepreneurship — including her own — which is one of the missions the organization promotes among the area’s farmers.

In addition to her work with Strolling of the Heifers, Latchis has been busy learning Greek. She has also undertaken the arduous chore of applying for dual Greek citizenship, which requires documentation of grandparental birth in that country, a difficult task because Greece at that time kept very poor birth records. (Her grandfather was born in Greece, his father, Demetrius, coming to the United States first, and then bringing his sons over).

Latchis is also an avid rower, frequently operating a single-scull along the Connecticut and West rivers. And, during the summer, she swims freestyle in the rivers. She is an avid cook, reader of fiction, and serves on the board of directors of Latchis Arts, an organization that helps develop and promote the production, exhibition and teaching of the performing and visual arts in Brattleboro.

Staying busy is one of her primary objectives.

“Boredom is not on my list of habits,” she says.

And she admits that her life has been an “interesting journey.”

“If I have a philosophy, it’s this: go at things easy, with an open mind. Go with curiosity.”

At a glance: Anne Latchis