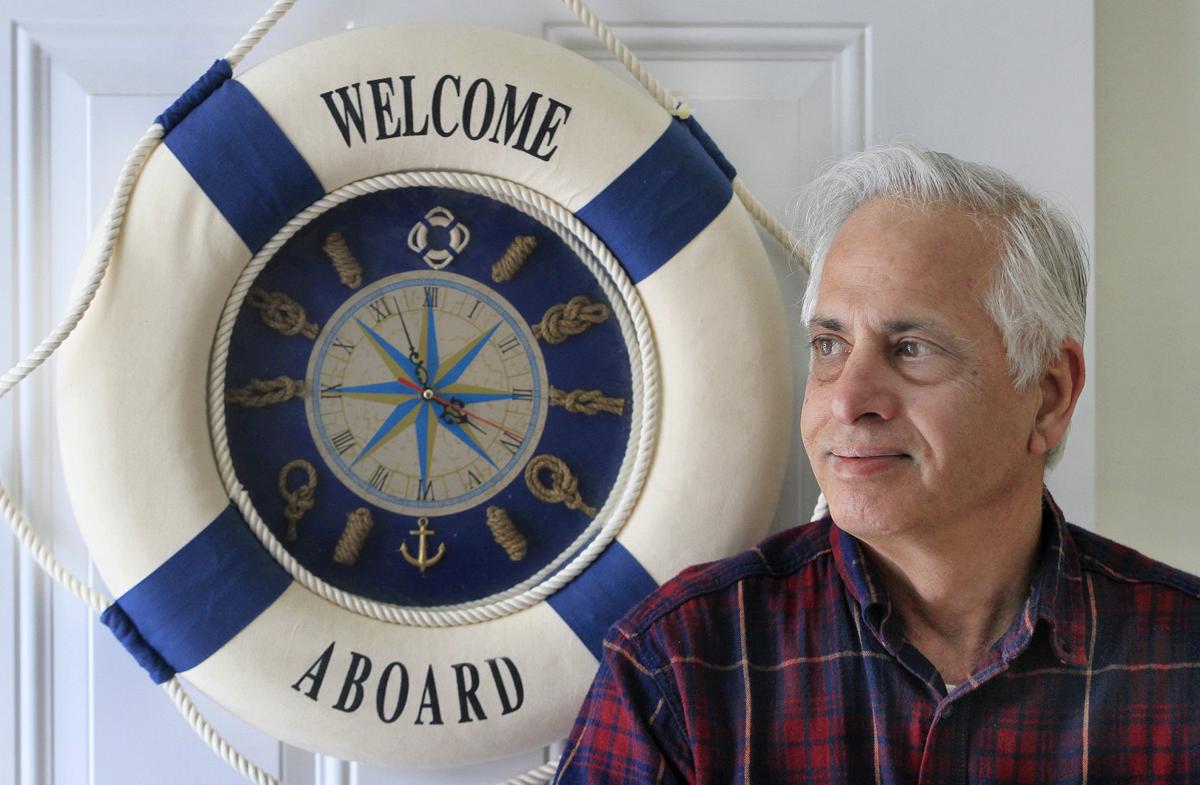 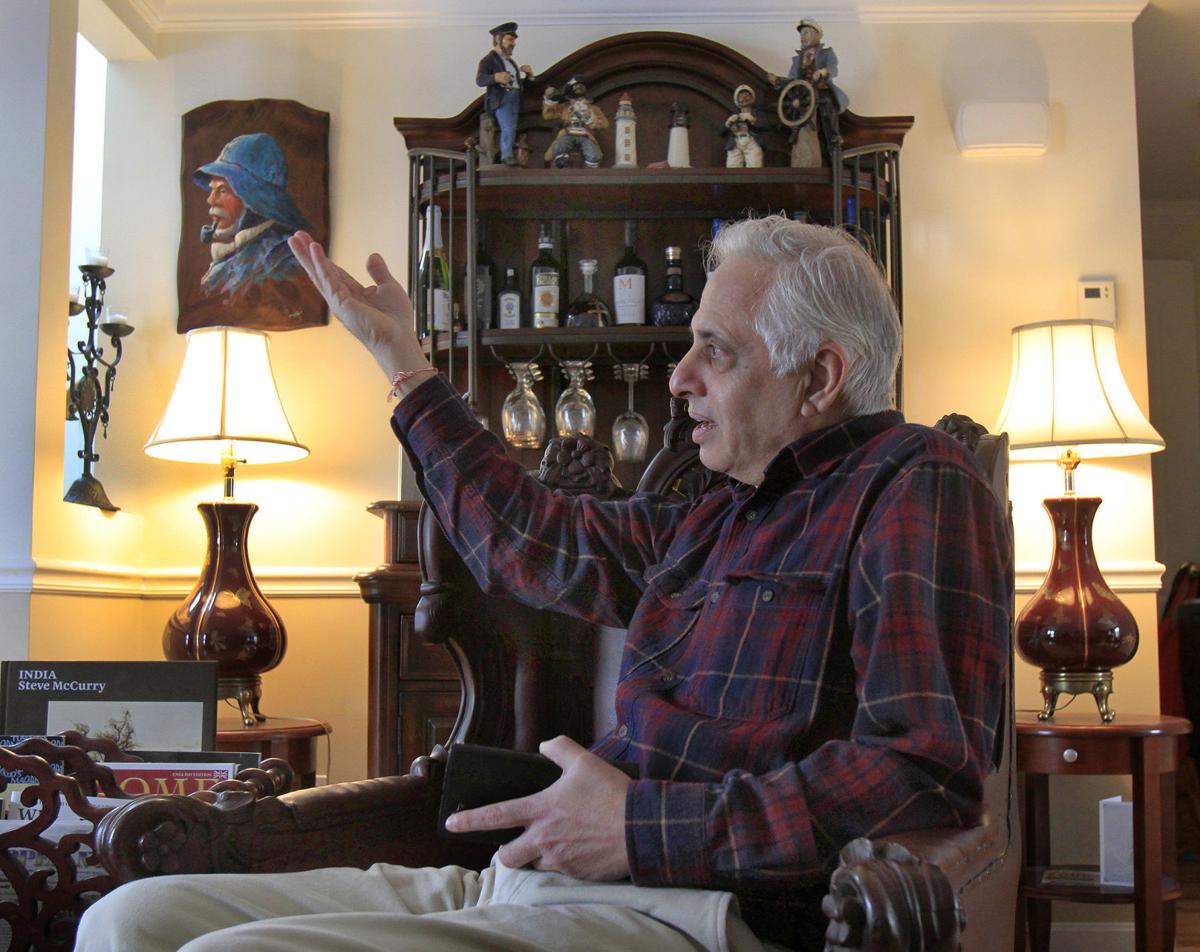 Ajay Bajaj in his West Swanzey home, where maritime decor reflects a life on the oceans.

Ajay Bajaj in his West Swanzey home, where maritime decor reflects a life on the oceans.

SWANZEY — Ajay Bajaj, a slender, fit-looking 59-year-old with a welcoming smile, remains standing until well after his guest has taken a seat.

“Coffee? Tea?” he asks, the personification of proper manners, in an Indian patois laden with a British accent. “Perhaps a drink?”

He holds something in his hand and proffers it to the guest. It looks like a passport, with the seal of Australia embossed on its front.

It’s not a passport, though, but a license stating that he’s qualified to navigate, control, even captain any merchant ship in the world, regardless of size, in any ocean, under any conditions. The license is still current.

“I am a master mariner,” he declares, with great pride. That is not a casual reference, as master mariner is the highest qualification a seafarer can earn. It is a standardized designation recognized by all nations, regardless of the country from which it is issued, signifying that its holder has passed all the necessary internationally sanctioned training and accreditation regimens.

“I was at sea for 35 years, until 2014, when I began teaching others to become master mariners,” he says. He has held all ranks shipboard from cadet to captain, and on the walls of the Swanzey condominium he shares with his wife, Chitra Akkoor, an associate professor of communication at Keene State College, are maritime artifacts reflecting his life on the oceans. A sextant, the time-honored tool of navigators used since the late 1700s, sits on a coffee table, and he carefully picks it up to demonstrate how it works.

He’s not retired, at least not yet, and still retains the title of teacher in charge, maritime studies, at the Northern Sydney Institute in Australia. Although currently living in Swanzey, he continues to maintain a residence in Sydney.

So, how did a person with such a background end up in this land-locked town, at least 2½ hours from the briny deep? It’s a circuitous story.

He was born in Dehradun, the capital of the Indian state of Uttarakhand. The city of about a half million is nestled in the foothills of the Himalayas, about nine miles from the Tibetan border. It is part of a beautiful valley, he says, with 9,000-foot peaks of the great mountain range looming on the horizon.

His family moved there during the 1947 partition of India into Pakistan and India, when about 12 million people were relocated according to religious affiliations — Muslims to Pakistan and Hindus to India. (It is estimated that as many as two million people were killed when civil war broke out during the split, and that created an atmosphere of hostility and suspicion between the two nations that plagues their relationship to this day.)

He graduated from elementary and high school at St. Joseph’s Academy in Dehradun, founded in 1934 by the Society of the Brothers of St. Patrick of Ireland, a Catholic missionary order. The school has grown in the recent past and now boasts an enrollment of 3,400. Bajaj identifies as Hindu, but also as an agnostic.

After training, his first assignment was as an apprentice cadet aboard an oil tanker out of Alexandria, Egypt.

“It was a disappointing experience,” he says. “I’d heard all these alluring stories of romance and adventure from people in my town about life at sea, but it wasn’t quite like that; it was just work, work and work.”

He learned, too, on that first voyage, that the Mediterranean Sea can be very rough in winter, despite all the promotional material about serene tourist cruises among the Greek Isles.

Even though it entailed rigorous labor aboard ship, he fell in love with the ocean, and discovered it affords a life much different than on land.

For example, he says that his years at sea created in him a contemplative mindset, and he began writing poetry, which remains one of his primary avocations.

“At sea, you’re exposed to wonderful sunrises, sunsets, and long twilights,” he says. “That spurs reflection.”

He also learned, because he worked with shipmates from every country in the world, that we humans share much more in common than not.

“You learn how similar people are. Travel removes the biases and prejudices; you accept others.”

There are few nations he has not visited, and in each he’s found special qualities and characteristics, along with those of its inhabitants. The prettiest location in the world, for him at least, is the Canary Islands, the Spanish archipelago off the coast of Africa in the Atlantic.

“Serene, pristine, beautiful, I fell in love with the place.”

The Monadnock Region, he says, is gorgeous, too, perhaps second only to parts of New Zealand.

“You don’t always appreciate the beauty of where you live,” he notes. “You take much for granted. For example, I was 52 years old before I even saw the Taj Mahal.” Once, because he loved the book and movie “The Bridges of Madison County,” he traveled to Iowa to see the locale. Another time, he spent six months in Angola. “There, I learned that man and beast live together.”

As he rose through the ranks past that of cadet, he transferred to many other ships, including serving as a junior officer on the Nord Jahre Viking. It remains the largest ship ever built, so big only one port in the United States could handle it — New Orleans, parenthetically the first American city he’d seen. The vessel could come only within 70 miles of that city, and a pipeline of that length loaded and unloaded petroleum, assisted by more than 200 pumps along the way. The ship was built in 1979 and eventually scrapped in 2009.

To grasp how large these supertankers are, Bajaj contrasted them with luxury cruise liners. The Jahre Viking had a “deadweight” of 564,650 tons, compared to a typical deadweight of 25,000 tons for a cruise ship. Deadweight tonnage is a measure of a vessel’s weight-carrying capacity, not including the weight of the ship.

In other words, supertankers are massive.

Bajaj describes many other aspects of big ships.

For example, their average speed is about 14 knots, or nautical miles per hour, and it takes five nautical miles for them to stop. With a “draft” — depth — of up to 80 feet, careful navigation near a coast is of vital importance.

Heavy seas are certainly a big consideration. “There is a corkscrew effect of rolling and pitching. Rolling is side to side, pitching is front to back. It affects everything you do, even how you eat. Everything that can move must be secured.”

These ships are designed to withstand the worst the sea can throw at them. “I’ve seen waves up to 35 feet high,” he says, the most turbulent at the Cape of Good Hope off South Africa, the graveyard of many sailing ships of yore.

When he began serving on tankers, about 27 crew members were required. Now, with sophisticated technology and computers, he notes, only about 17 are needed. There are eight officers assigned to each ship.

Although normal crew rotations are six weeks on, six weeks off, the longest continuous duration he served on a ship was six months. Thirteen-hour workdays are typical.

All crew members must pass a physical examination before they come aboard, he says, for obvious reasons; there are no doctors.

“If someone gets sick, we can radio in for medical advice about what to do. I’m authorized to dispense drugs,” he says, and emergency surgery can even be performed, with step-by-step radio instructions from physicians.

In 1989, Bajaj married in India, and he and his wife moved to Sydney in 1992, where he took advanced maritime courses. A daughter, Nandini Bajaj, was born, followed by a son, Gautam Bajaj. Nandini is now an attorney in Canberra, Australia’s capital, and Gautam is a banker in Sydney.

The marriage ended in divorce in 2018.

Then, the same year, through the magic of social media, Bajaj reconnected with a childhood friend from his hometown — Akkoor — who was living in Swanzey and whose husband had died in 2016.

“We’d not contacted one another for 40 years,” he says, and he and Akkoor met up in New Delhi. The two began a relationship, he visited Swanzey, then moved here, and they ended up marrying in September last year, at the town hall.

Although he maintains that people everywhere share many similarities, he has his observations about the United States, Australia and his native India.

“America is old-fashioned in many ways, prim and proper, and definitely politically correct; people are very measured in what they say, very careful not to offend. Australia is a bit more relaxed; people feel free to speak their minds.”

This he says about his native land: “In India, you have 550 dialects and 250 languages. How do they run India? They don’t run it; there’s no way you can run that.”

Bajaj’s wanderlust has apparently not been sated, as he and his wife are planning two long trips — one to Russia to travel the Trans-Siberian Railway, and another to Africa, where they intend to rent a Jeep and drive from South Africa to Egypt.

As of yet, however, there’s no plan to travel by sea.

At a glance: Ajay Bajaj