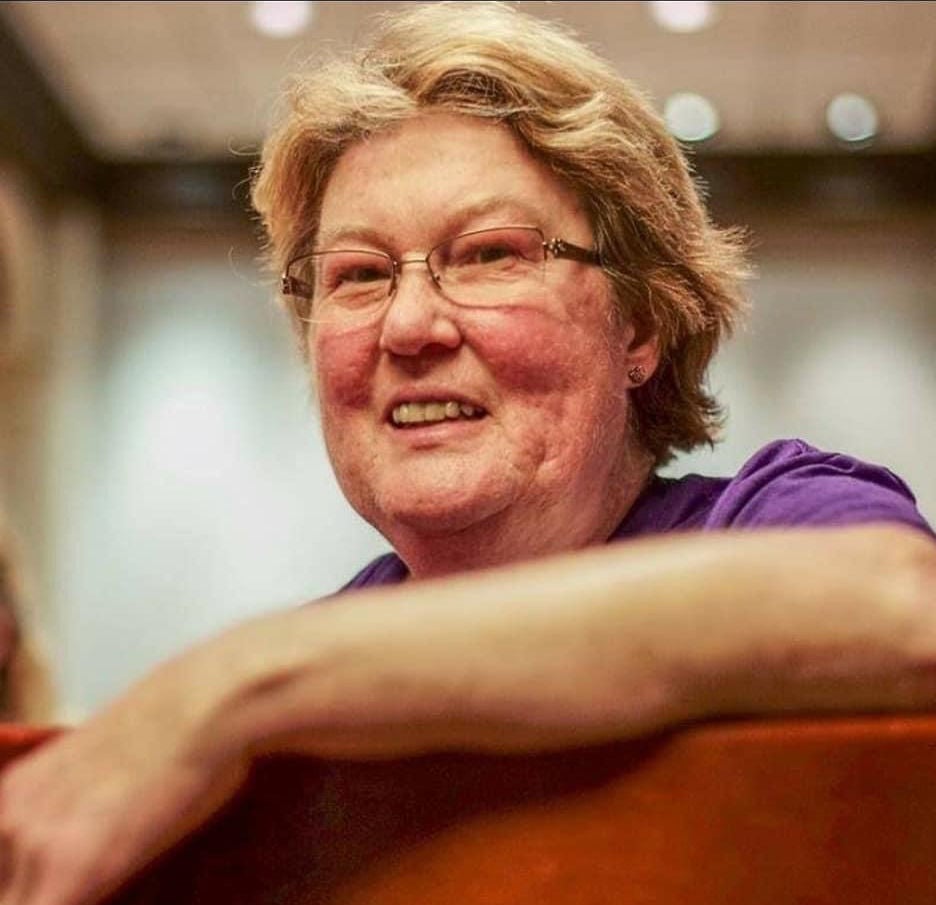 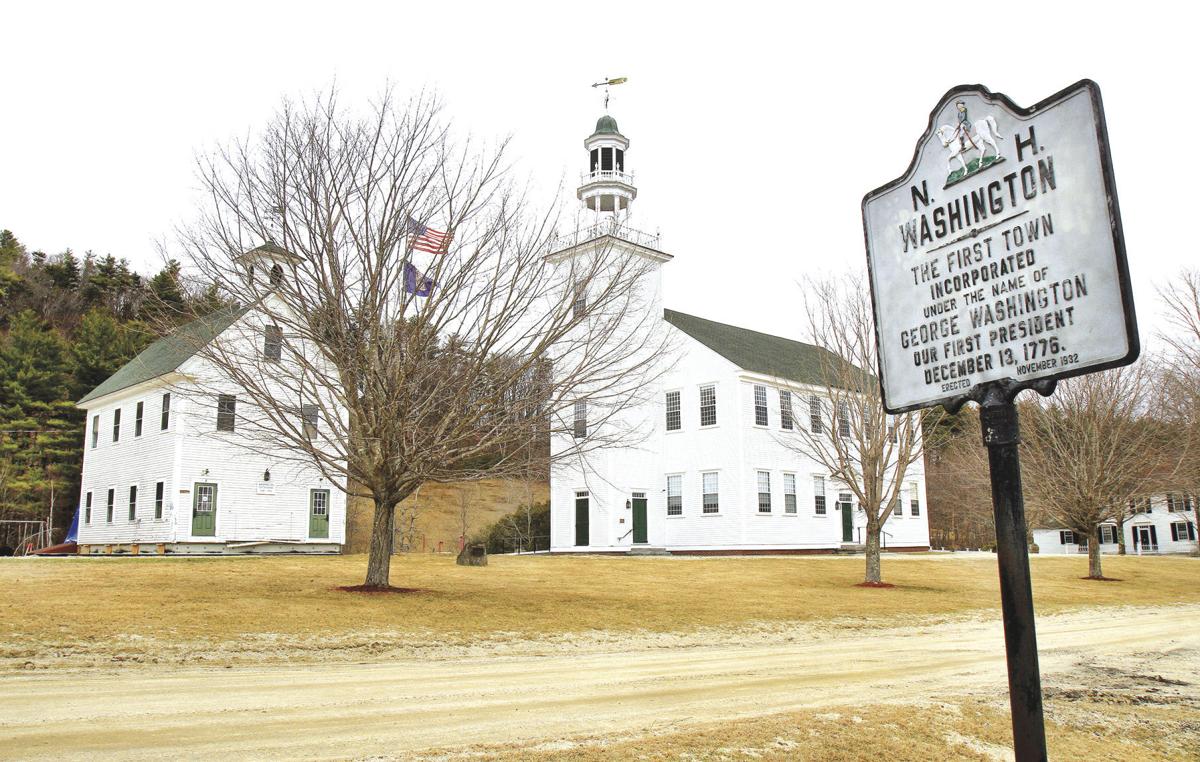 The town of Washington’s village center was desolate Wednesday, as the tiny community deals with the loss of one of its own due to COVID-19. 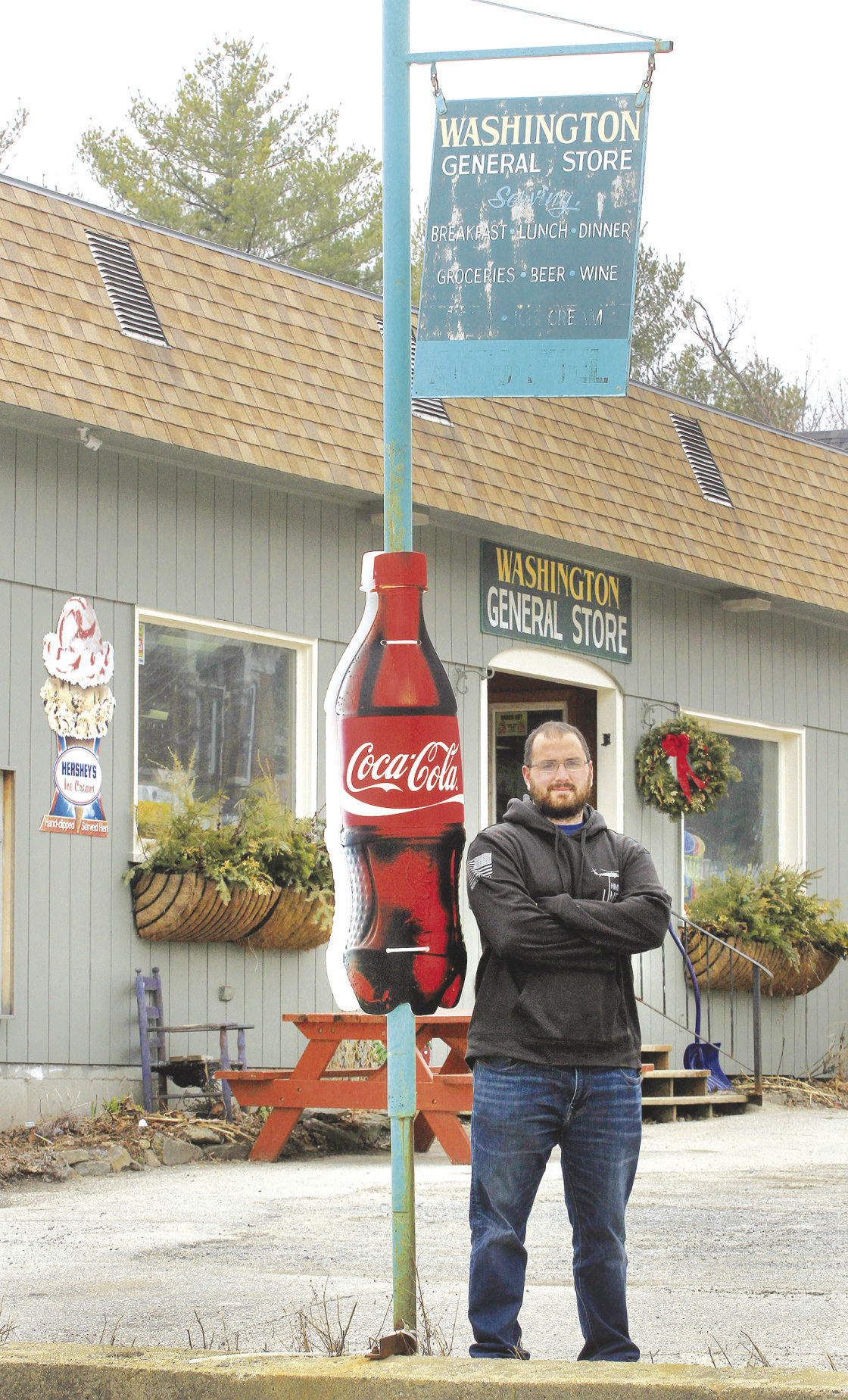 Ryan Curran, proprietor of the Washington General Store, stands alone outside the store Wednesday. Curran closed his store for a week after it became known a local resident was fighting COVID-19. 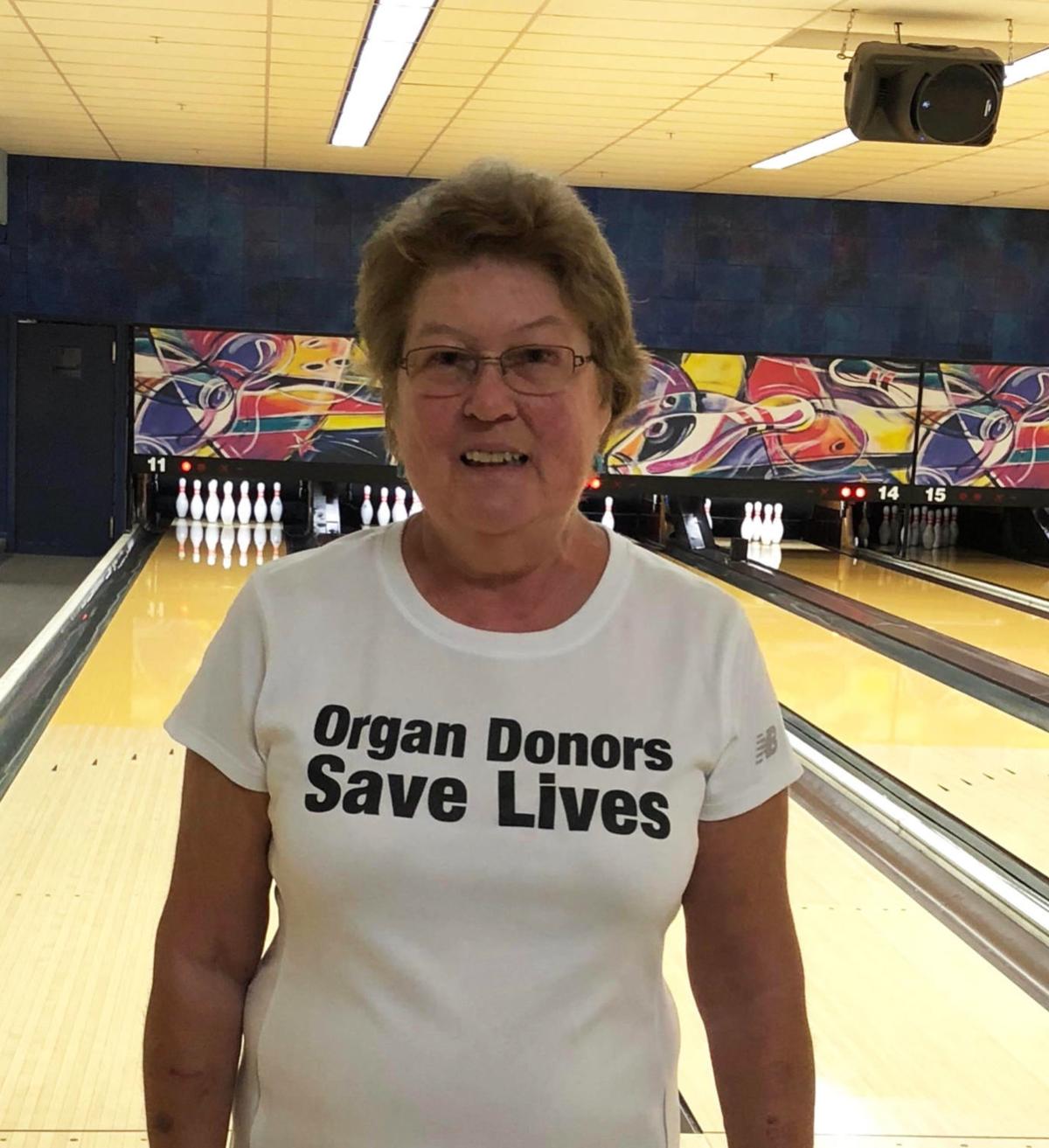 Joanne Mellady at an event in Massachusetts in 2018, on the 11th anniversary of her double lung transplant

The town of Washington’s village center was desolate Wednesday, as the tiny community deals with the loss of one of its own due to COVID-19.

Ryan Curran, proprietor of the Washington General Store, stands alone outside the store Wednesday. Curran closed his store for a week after it became known a local resident was fighting COVID-19.

Joanne Mellady at an event in Massachusetts in 2018, on the 11th anniversary of her double lung transplant

WASHINGTON, N.H. — As she waited for a lung donor, Joanne Mellady made a list of everything she would do when she could breathe again. Skiing. Roller-skating. Hang-gliding. Travel.

After her double-lung transplant in 2007, she was unstoppable.

She went skiing and cycling. She had a canoe, a kayak and a Sea-doo. She traveled to Florida, Kentucky, Alaska and the Grand Canyon, sometimes in her RV. She won medals at the Transplant Games, an event for organ recipients and living donors. She especially liked to compete in swimming and bowling, but “would try anything,” her sister Jean Sinofsky of Dennis, Mass., said.

“It was a second life,” said another sister, Joyce Smith of Andover, Mass.

Then she came down with COVID-19.

The news that Mellady had contracted the contagious respiratory disease shocked her family and sent Washington — an already quiet town of 1,100 in the hills just north of Cheshire County — into lockdown. On March 23, after learning of Mellady’s positive test, selectmen issued an advisory urging residents to stay in unless absolutely necessary — days before Gov. Chris Sununu would issue a statewide stay-at-home order.

Mellady, 67, died Monday at Concord Hospital, according to family. She appears to have been the fourth COVID-19 death confirmed by the N.H. Department of Health and Human Services, which announced it Wednesday without identifying information.

Smith said the family doesn’t know where Mellady picked up the virus. But like many other Granite Staters, her age and medical history made her especially vulnerable. “She’s the example of why everybody has to stop spreading it,” Smith said.

‘She cheated death once’

Mellady grew up in Lynnfield, Mass., and had a career as an IT specialist. She owned land in Washington, and eventually built a second home there with her husband, Steve, who died in 2005. She moved to New Hampshire full time after her 2007 transplant.

Mellady lived alone near a lake in Washington with her 12-year-old dachshund, Oscar, but had friends around town and all over the country.

Her sisters say she was kind and funny. She could be quiet, but made friends wherever she went. She loved her niece and nephew as if they were her own kids, Sinofsky said. She kept busy, and her mind was always active, even when her physical activity was limited by what her nephew knew as “Auntie Jo’s nose hose.”

Around her late 30s, she had been diagnosed with alpha-1 antitrypsin deficiency. The genetic disorder can afflict the lungs, causing shortness of breath and other respiratory symptoms. Eventually, she had to be hooked up to oxygen 24/7.

Before and after her transplant, Mellady was active in causes related to alpha-1 and organ donation. She had a network of friends in that world. “She was so very supportive of people who were on the current list or had just received their transplants,” Sinofsky said.

She said her sister was thankful for every extra day.

On Sunday, March 15, Mellady had lunch with family in Methuen, Mass. She seemed fine, Smith said.

The next day, a nurse administering a weekly infusion Mellady needed noticed her heart rate was way up. Mellady got a friend to drive her to Concord Hospital.

The doctor initially suspected a flareup of pneumonia, which Mellady would catch from time to time, Smith said. But four or five days after she entered the hospital, a test came back positive for COVID-19, according to her sisters.

Jed Schwartz, the chairman of Washington’s selectboard, said he learned about the test from the friend who drove Mellady to the hospital.

“It’s not that it was unexpected that this would happen eventually,” he said. By then, state health officials were already warning of community-based transmission in multiple counties.

Even so, the news felt “devastating.” “It was here,” he said. “That was the way I felt. And we have to do something.”

Town officials were aware that Mellady had been active socially and others in town may have been exposed to the disease, Schwartz said. (He did not mention Mellady by name, citing privacy laws; The Sentinel learned her identity through an obituary in the local Stone Bridge Post.) On the town’s website, they announced that Washington had a confirmed COVID-19 case and strongly advised people to stay at home.

Schwartz said the state health department contacted people who may have been exposed to the virus. Separately, the town compiled its own list, and an emergency point person has been checking up on them. Some have displayed symptoms, but as of Thursday, Schwartz said he did not know of any additional confirmed cases in town. He blamed the limited testing.

“They’re not testing them, and this is part of the problem,” he said. “We don’t have enough tests. It is a nightmare. We need to be testing people.”

The same day as the selectboard’s stay-at-home advisory, the Washington General Store announced it would close to walk-in shoppers. Customers called in their grocery orders and picked them up in the parking lot.

The store reopened to customers this past week, though not the small diner inside.

“It’s very different now when people can’t come in and sit at the counter,” owner Ryan Curran said. “You know, people you’ve seen for over 20 years coming to the counter and sitting there and talking to you every day. And then now they’re not.”

Both he and Schwartz said many residents were staying home even before the selectboard’s warning, and most have complied.

Schwartz said he’s been pleased by that. But he’s also thinking about how quickly a contagion can spread in a small, close-knit town with a number of elderly folks. And he’s eyeing the return of second-home owners from denser urban areas. Washington’s population swells to more than 4,000 in the summer, he said.

“There’s maybe a feeling — because we’re surrounded by this beautiful, pastoral scene, and in the middle of the country, and it feels like it’s probably pretty safe out there,” he said. “But at the same time … there’s not that many people in town. They interact with each other.”

Mellady’s health declined after she entered the hospital. At the end of the first week, she was put on a ventilator. She was kept in a negative pressure room that medical personnel could enter only after donning protective gear.

Due to the outbreak, her family could not visit.

By Sunday, March 29, she had deteriorated so much that they knew it was the end. She was unconscious, but a nurse at Concord Hospital suited up and held a phone to her ear so the family could say goodbye.

She was taken off the ventilator the next day.

“It’s just so hard,” Smith said. “Because she was alone.”

Mellady’s extended family — which also includes her brother, Fred Smith, and his wife, Diane Kozwich; Sinofsky’s husband, Edward; a nephew, Andrew Smith; and a niece, Allison Liokumovich — hasn’t been able to hold a service because of the outbreak. After it ends, they hope to gather for a celebration of life.

Her sisters say they have been touched by the outpouring of support and memories from Mellady’s friends, near and far.

Smith recalled cleaning out the house in Washington and going to the town dump. “I said, ‘I don’t have a dump sticker but Joanne Mellady was my sister,’ ” she said. “And he goes, ‘Oh, I heard about that. I’m so sorry.’ ” She had a similar conversation at the post office.

Sinofsky got a call from a doctor at Cleveland Clinic, which did Mellady’s transplant in 2007. The doctor wanted to tell Sinofsky how much she had learned from her sister over the years, how much she had amazed her. “And how this — she called it this ‘monster disease’ — was what it took to take her down.”