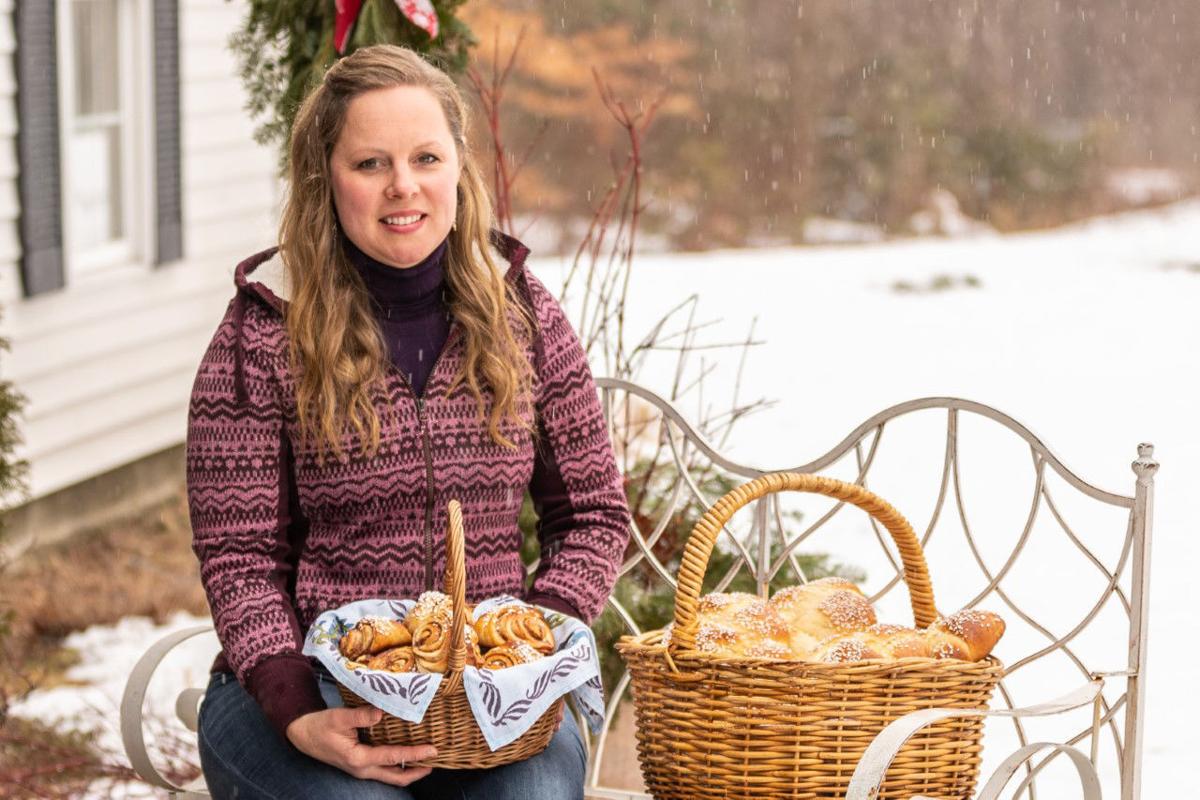 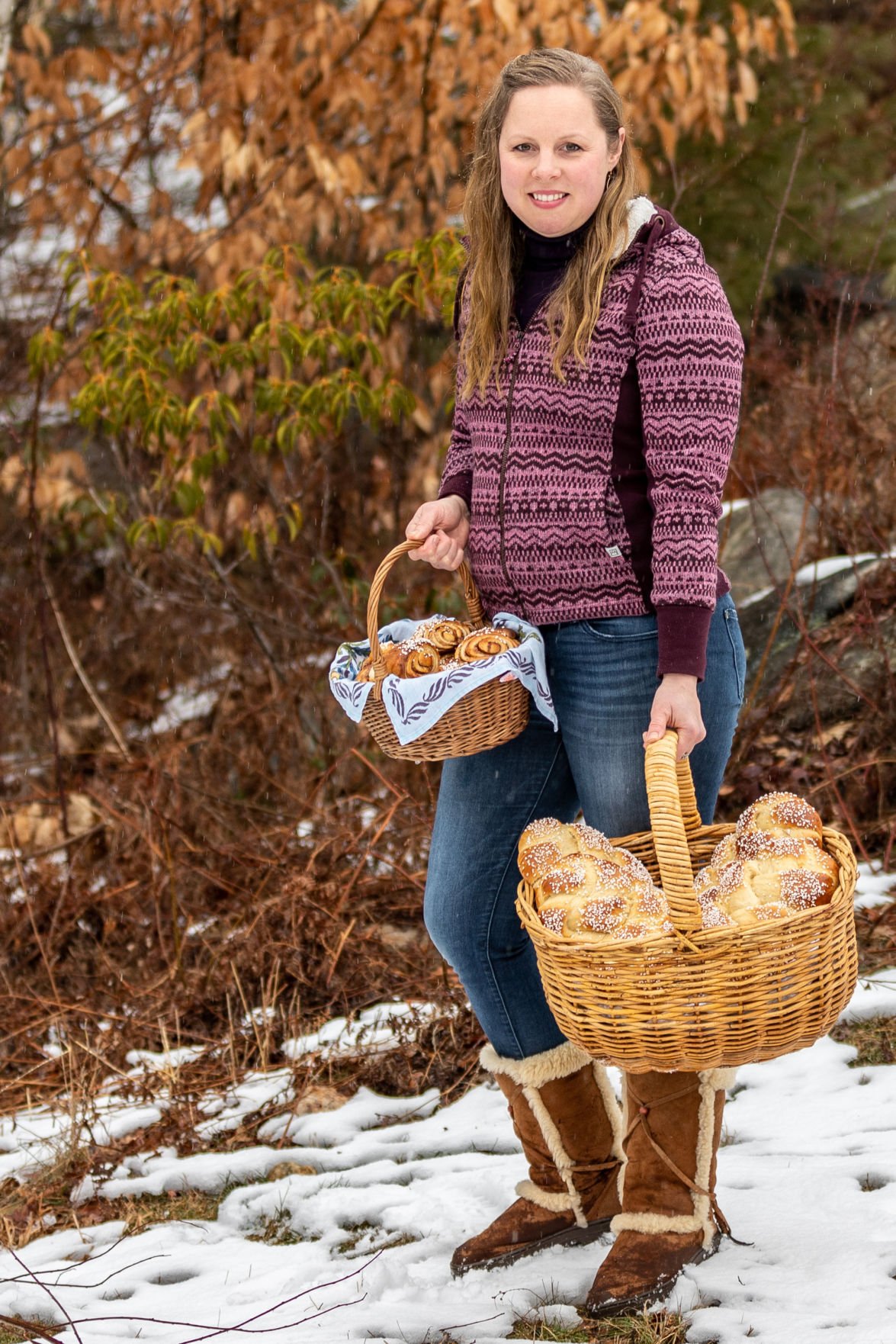 include kanelfläta, a cinnamon-flavored braided loaf from Sweden, and korvapuusti, the Finnish version of a cinnamon roll.

include kanelfläta, a cinnamon-flavored braided loaf from Sweden, and korvapuusti, the Finnish version of a cinnamon roll.

Every Saturday morning when Adrianna Stefanko, née Raitto, was growing up, her grandmother and great-grandmother would gather at the family’s Fitzwilliam home for coffee and pastries.

She cherished the weekly affairs — which, with her and her mother, convened four generations — as a time for togetherness and reflection, Stefanko, 38, said Friday.

“Life is so fast, and time flies,” she said. “I think just having an hour or two together, once a week, is kind of rare for some families today.”

Saturday mornings were not particularly gabby, though: Stefanko explained that her great-grandmother, Esther Holman, was a simple and humble matriarch — a product, Stefanko thinks, of her Nordic heritage.

Holman’s father, her great-great-grandfather, was a forester who emigrated from Finland to Fitzwilliam around the turn of the 20th century, probably in search of work and a better life, according to Stefanko. She doesn’t know more than that because Holman, who died two years ago at 96, never shared much.

Close to 15 years ago, she decided to honor Holman by learning how to make nisu, a traditional Finnish sweet bread seasoned with cardamom that her family often ate with coffee — though, Stefanko added, it was usually purchased from another vendor. (Holman and Stefanko’s grandmother were great bakers, she said, but nisu — the Finnish word for “wheat” and which is also called pulla — was not in their repertoire.)

“I felt like it was silly to not have anyone in the immediate family that knew how to make this bread that we ate so often,” she said.

Stefanko taught herself how to make nisu through occasional practice, though she was not initially “super dedicated to it.”

After graduating in 2005 from Saint Anselm College in Manchester with a fine arts degree, she worked landscaping jobs in Nantucket, Mass., and then New York City for a time.

Stefanko later returned to Nantucket, where she was an aide in the middle school, before moving back home and holding similar positions in some local schools. She decided to pursue a master’s in education from Antioch University, which she earned in 2011.

“I thought that was kind of where my path was leading,” she said. “… I love being with children and making an impact in their lives.”

She spent two more years in education, teaching at an elementary school in Royalston, Mass., while also gardening and landscaping on the side.

Children soon became part of Stefanko’s life anyway, however. After meeting her husband, Christopher, on a blind date, the couple had three sons: Jaxson, 6, Thatcher, 4, and Magnus, 3.

While primarily a stay-at-home mom, Stefanko also began growing and selling fresh-cut flowers at the Jaffrey Community Farmer’s Market. After someone suggested that she peddle her bread, as well, she did just that — to great success.

“The bread flew off [the stand],” she said. “I would sell out every time, and I would be sitting there with just my flowers again.”

Stefanko explained that her customers say the Finnish fare evokes their own family memories. It is even popular among area residents without ancestors from Finland but who grew up eating nisu with their Finnish friends’ families.

“I think that’s how powerful bread is,” she said.

Since 2017, she has formalized the operation, starting a website and adopting the moniker the “Finnish Mama.”

In addition to nisu, Stefanko’s breads include kanelfläta, a cinnamon-flavored braided loaf from Sweden, and korvapuusti, the Finnish version of a cinnamon roll. Customers can purchase the baked goods at Bullock’s Farm Stand on Number 4 Road in Fitzwilliam or online, at www.finnishmama.com, and meet her downtown to pick up their order.

Stefanko, who homeschools her children, said she spends two or three days each week baking and estimated that she makes between 60 and 70 loaves in that time.

Her kitchen has two ovens but otherwise “nothing special,” she said. In fact, Stefanko worries that transitioning from single batches to a more industrial process could throw off her ingredient mixtures and affect the bread.

“If I buy a big mixer, I would have to really recalibrate everything,” she said. “If you’re tripling or quadrupling the recipe, it is going to change it a little bit.”

That would be a problem for Stefanko, whose bread is award-winning: She captured first place in the People’s Choice competition at the 2018 Great Finnish Bread Bake-Off, organized annually by the Historical Society of Cheshire County.

Stefanko said a judge told her that she would have also won Best in Show with a different loaf shape. She made the adjustment and won both the People’s Choice competition and Best in Show in 2019.

Business was slow during the early months of the COVID-19 pandemic, Stefanko said, but picked up as people began frequenting farm stands like Bullock’s — a trend she hopes will continue.

Her commitment to the local economy is reflected in her volunteer work, which includes membership in the Fitzwilliam Economic Committee since 2016. The committee, which she chaired for a year, aims to attract new businesses, support existing businesses and encourage commerce, according to its website.

She pointed to the group’s Connect, Create & Collaborate series, which invites guest speakers and offers local business owners an opportunity to network with each other, as a particularly effective program. (Through connections from those events, Stefanko hopes to create a section on her website to purchase Finnish-themed products sold by other Fitzwilliam vendors, like Moose Run Leather.)

She has also volunteered at the Helping Hand Center food pantry in Troy, where her father’s family is from, and donates bread to a local church and other charities. After Stefanko’s brother, Desmond Davis, died from an overdose in December 2016, she directed her donations to other families impacted by the opioid epidemic.

She and Christopher, a carpenter, recently purchased and began renovating their home on East Lake Road in Fitzwilliam — a project that will include installing a double oven in the kitchen, Stefanko said eagerly.

And she has big plans to expand her business at the property, selling her bread on-site and adding other culturally Finnish elements like a sauna and maybe even a native animal. (She declined to offer more details about the furry Finn, explaining that the plan is “pretty much a pipe dream.”)

She already has a new name for the business, too: Bringing a Little Finland to Fitzwilliam.

Even as her business grows and her children get older and busier, Stefanko has continued to see her mother, Melinda McGarry, and grandmother Nancy Raitto every Saturday for coffee and nisu. Sometimes her sons — the family’s sixth generation in Fitzwilliam — come along, too.

“One thing I hope that I can share with other people is that tradition of bringing people together and sitting down … and connecting before you go off in separate directions,” she said.

At a glance: Adrianna Stefanko