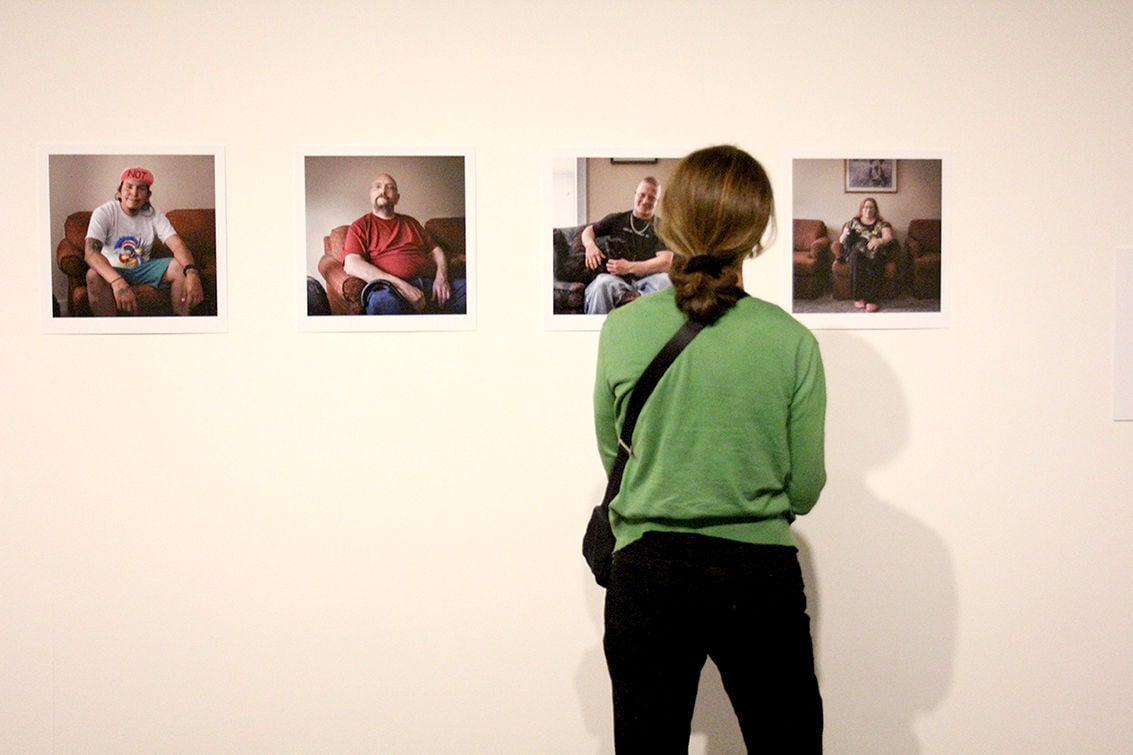 A visitor views a photography exhibit at the Brattleboro Museum & Art Center in 2018. 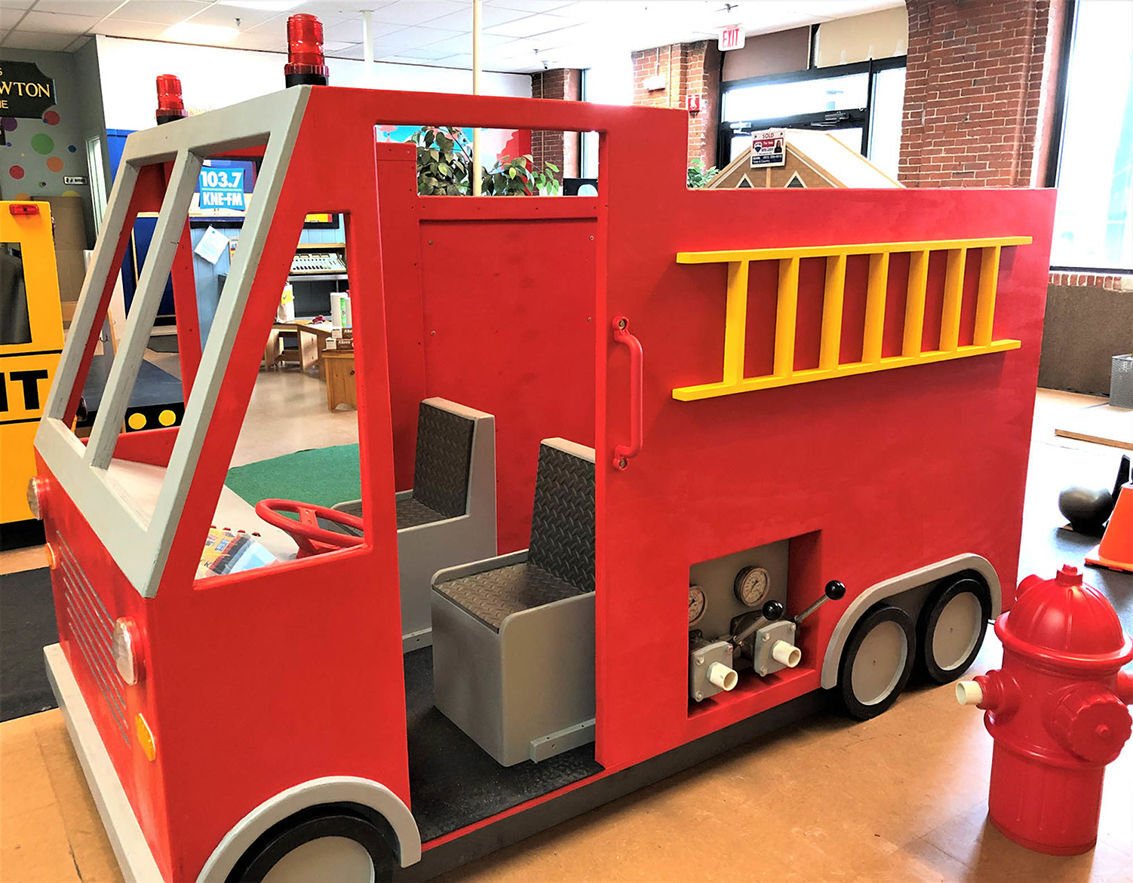 A fire-safety exhibit at the Cheshire Children’s Museum. 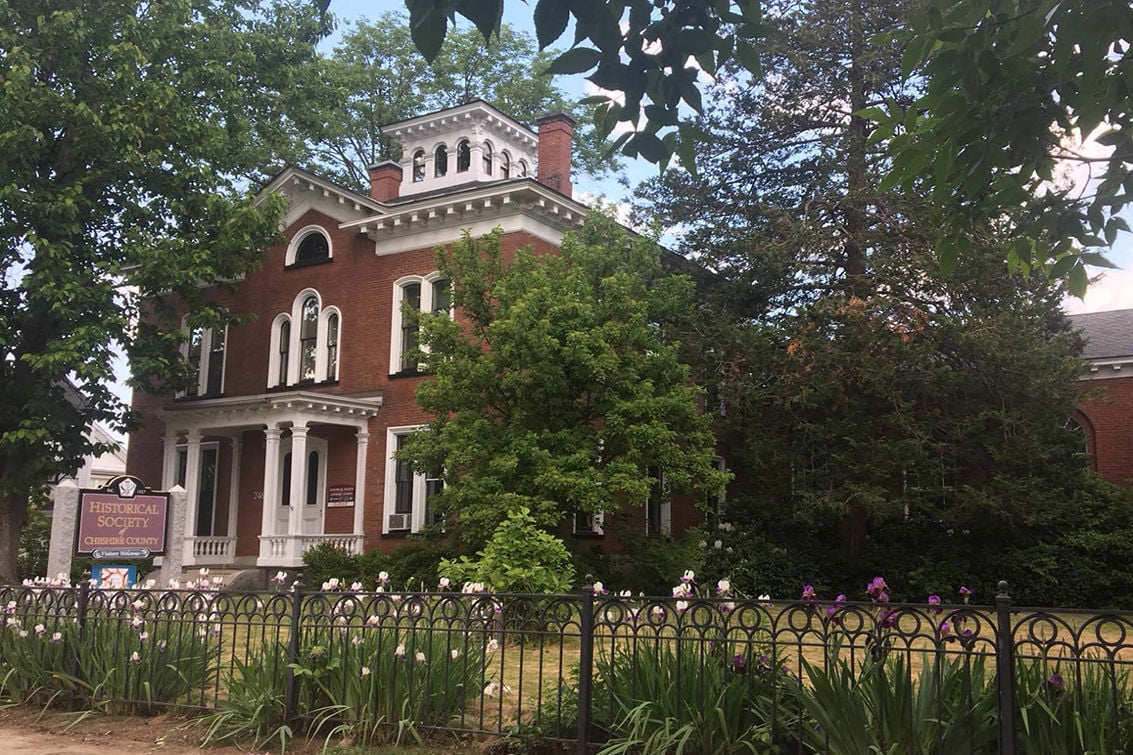 The 1870 Italianate Ball Mansion serves as headquarters for the Historical Society of Cheshire County. 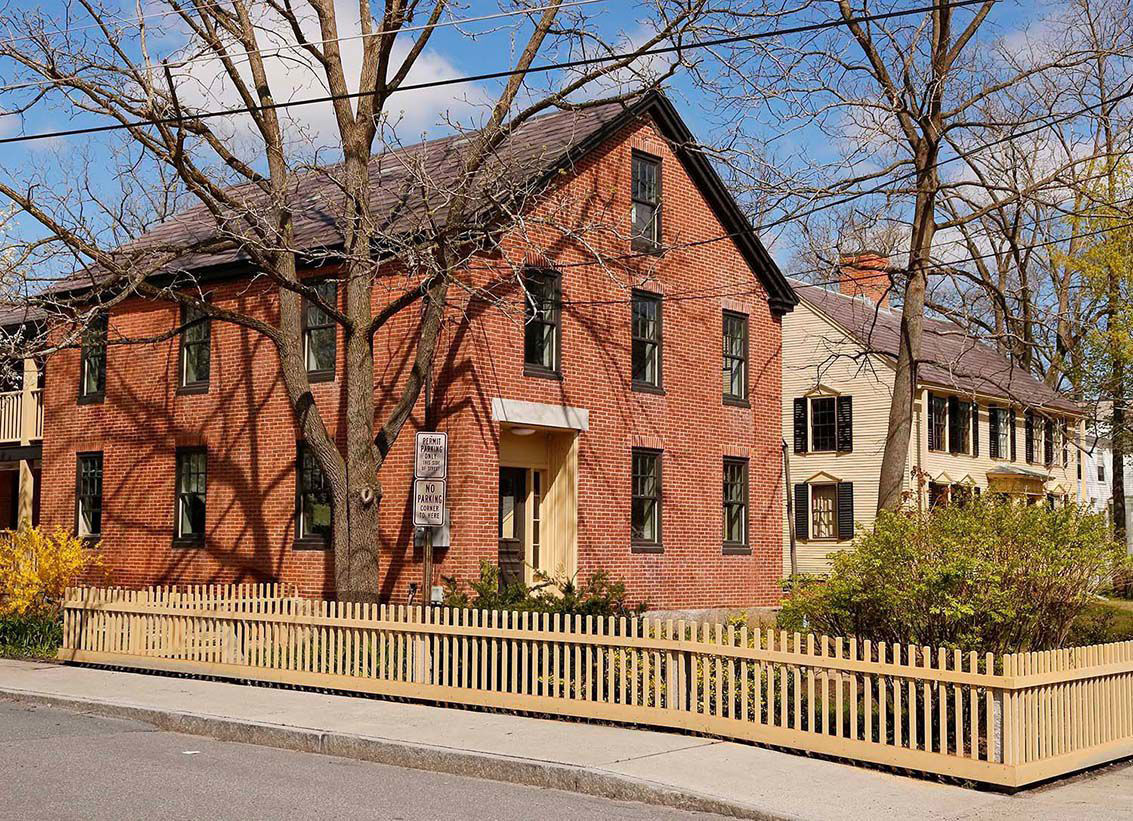 The 1839 Bruder House (foreground) and the adjacent 1762 Wyman Tavern are operated by the Historical Society of Cheshire County. The Bruder House is under renovation to become the society’s welcome center and educational facility. The Wyman Tavern is a house museum. 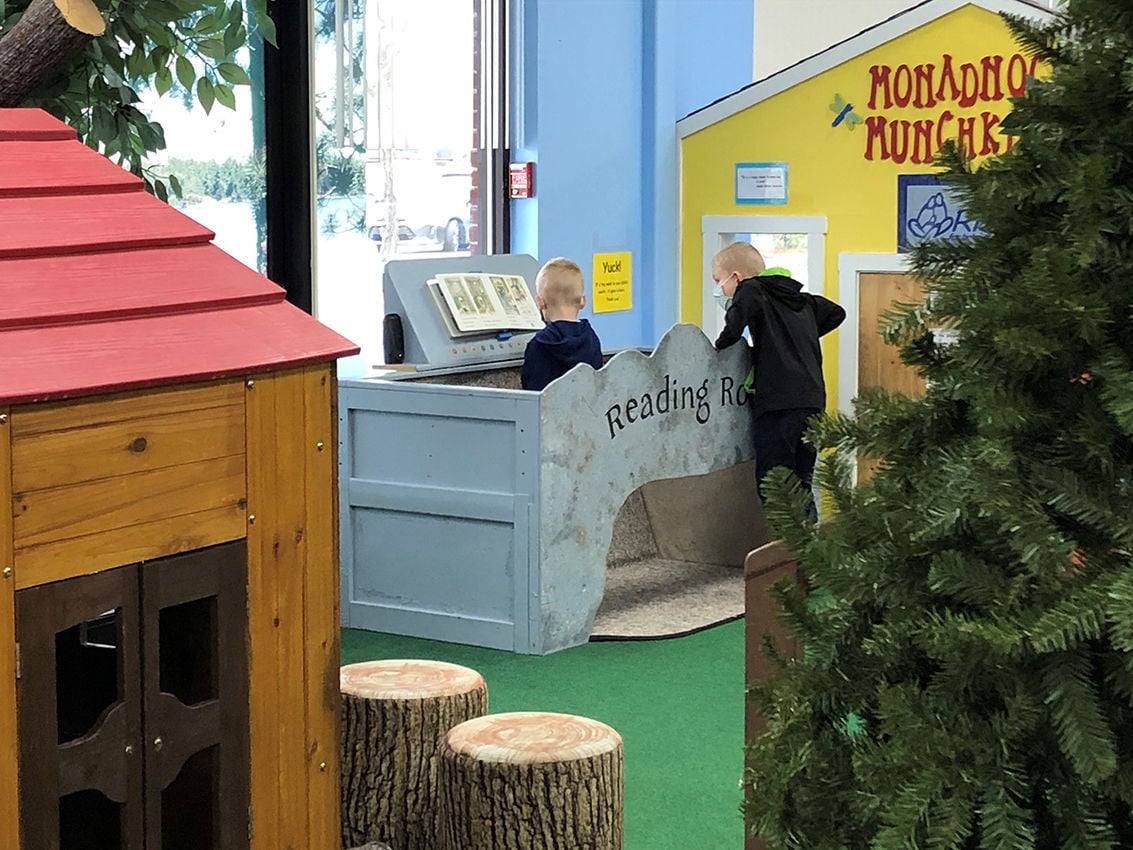 A visitor views a photography exhibit at the Brattleboro Museum & Art Center in 2018.

A fire-safety exhibit at the Cheshire Children’s Museum.

The 1870 Italianate Ball Mansion serves as headquarters for the Historical Society of Cheshire County.

The 1839 Bruder House (foreground) and the adjacent 1762 Wyman Tavern are operated by the Historical Society of Cheshire County. The Bruder House is under renovation to become the society’s welcome center and educational facility. The Wyman Tavern is a house museum.

Like small businesses, many museums have been hit with closures, capacity reductions and limitations to the in-person services they can provide, requiring them to get creative with how they operate.

As shoppers flock to support small business during the holiday season — which have also struggled under the COVID-19 pandemic — museums are asking people not to forget about them.

One area museum that observed Museum Store Sunday is the Historical Society of Cheshire County, which is offering a 10 percent discount in its online store until Dec. 23, according to Marketing and Museum Store Manager Andrea Cheeney. Non-members can use the promotional code localhistory10, while members can use their promotional code to receive a 20 percent discount.

“Last year we conducted about 165 events in person,” she told The Sentinel in an email, noting that the historical society’s programming reached 13,000 people in 2019. “...We canceled 85 in-person programs this year, which is about 55% of our program lineup. Socially distanced outdoor walking tours for a limited number of people allowed us to continue some in-person events.”

The museum store had also been closed to the public in March due to the pandemic, Cheeney said. But the historical society has been focused on ramping up its online store to allow sales to continue. “The proceeds from Museum Store sales benefit our operations and educational programs,” she said in an email.

Other museums in the area have been feeling the heat as well. The Cheshire Children’s Museum closed in mid-March and didn’t open its doors again until October. While it does have a small shop, the children’s museum was closed Sunday and is not offering any holiday promotions at its store.

Ganley said the museum has also dramatically cut its capacity. In normal times, there could be as many as 130 visitors in the building at once with several hundred people coming in during a weekend. These days, the museum is limiting itself to two groups of 20 each day, with time set aside after each group to sanitize the facility.

Having to cancel birthday parties has been a major factor, Ganley said, with no parties held this month, compared to 13 in November 2019. The museum was booked solid through March and April, she said, and it was heartbreaking to think of all the kids who had been looking forward to their birthday at the museum only to be told they wouldn’t be able to celebrate there.

A survey of museum operations under COVID-19, conducted this past summer by the American Alliance of Museums, showed that one third of museums nationally are expected to lose more than 40 percent of their annual operating income this year. Forty-one percent anticipate having to reduce staff, and only two thirds are confident they will be able to survive through 2021.

Danny Lichtenfeld, director of the Brattleboro Museum and Art Center, is having a similar experience to museums in Cheshire County. The Brattleboro Museum closed fully for three months in the spring, before opening again in mid-June with added restrictions and precautions that have increased expenses while decreasing revenue.

In addition to having a reduced visitor capacity, he said the museum usually has elderly, retired people who volunteer as greeters or work at the front desk. But because those over 60 have been identified as a high-risk population for developing severe COVID-19 symptoms, the museum decided to hire employees who would be less at risk.

“Although we opened, we’re having fewer people come to the museum, and we’re spending more to be open than we used to,” Lichtenfeld told The Sentinel Saturday. “Our attendance is probably about half of what it would be.”

He said the museum did not participate in Museum Store Sunday, though it does have a physical and online gift shop. He said revenues from the store account for only a small portion of the museum’s income. He said a more important revenue stream that has been greatly diminished in recent months is museum rentals for special events, such as weddings.

On the plus side, Carroll noted that the pandemic has provided the historical society with an opportunity to invest more in its virtual offerings, allowing the society to create 44 additional virtual programs to date. These have included Zoom lectures, virtual fundraisers, historical YouTube videos, and access to local historical films and pre-recorded presentations.

“Our director, Alan Rumrill, has spent a lot of time researching and reporting on local history stories that tie into the pandemic which has been the most impactful accomplishment this year,” Carroll said.

She added that she has been researching women’s suffrage and other notable female figures from the region to create a new page on the historical society’s website. Gifts celebrating a woman’s right to vote are among the many items for sale in the museum shop.

The historical society has also created remote learning materials, which have been used to reach 400 area students since the pandemic began. Carroll emphasized other members of the staff have been hard at work using digital platforms to keep the organization’s mission alive and to ensure safe access to the museum’s in-person facilities, including the research library and museum store.

The Brattleboro museum has also been heavily focused on finding ways to help supporters enjoy what the museum has to offer virtually. Lichtenfeld said the museum has introduced 3D virtual tours, which have been very popular. He added that given the museum’s large, open layout, it’s an ideal place for social distancing, and he said visitors are encouraged to drop by.

Ganley said the biggest thing supporters of the Children’s Museum can do to help get them through the rough last few months is to make a donation.

Lichtenfeld said becoming involved in the organization as a member is also a great way to support the museum’s mission.

“The number one thing that people can do, if they value the work we do, if they take advantage of it personally, and just if they appreciate it, is they can be become a member,” he said.