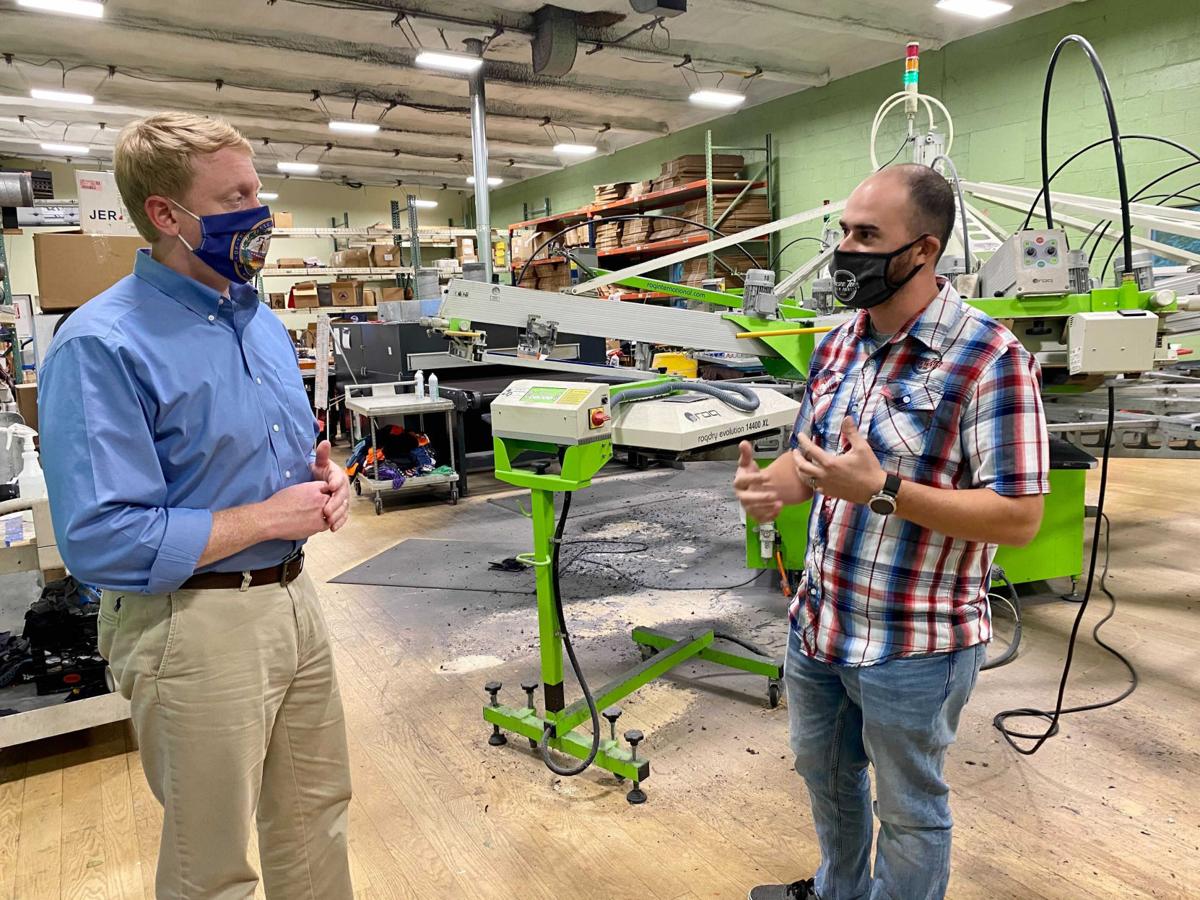 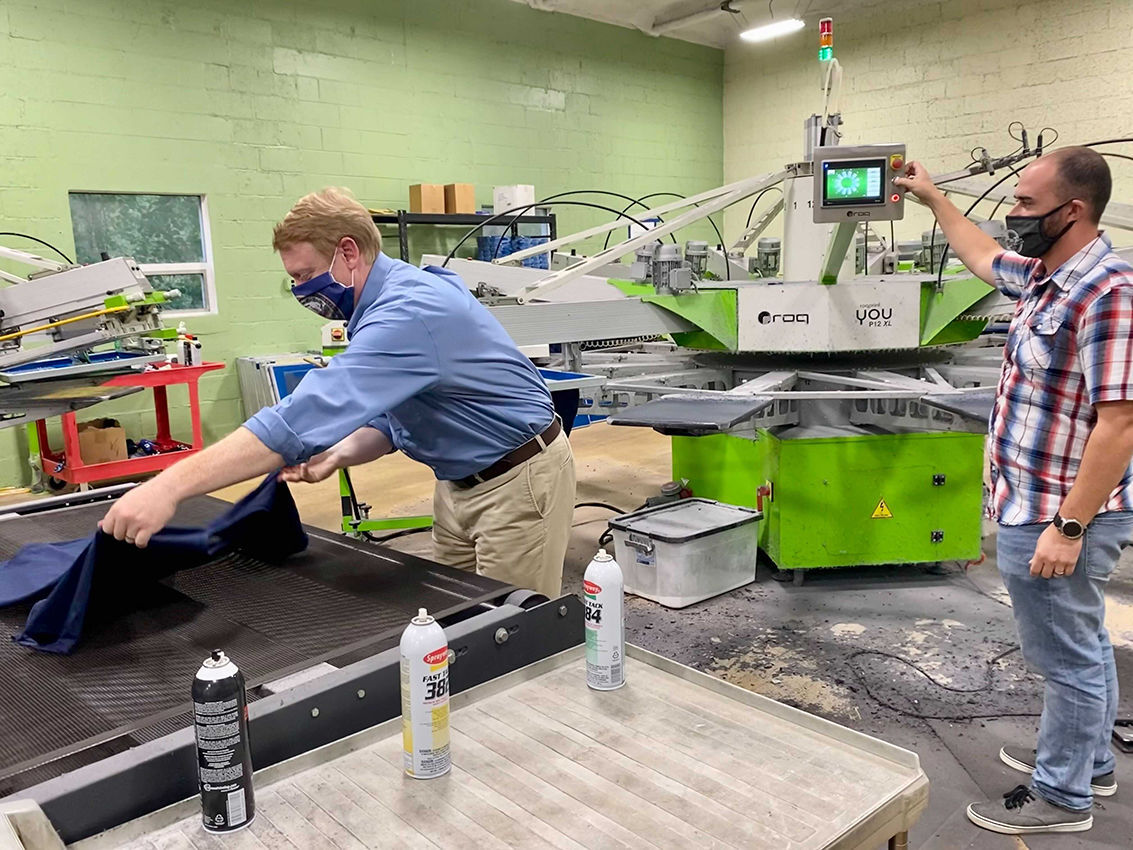 Beeze Tees owner Tim Pipp (right) puts N.H. Senate Majority Leader Dan Feltes to work during the gubernatorial candidate’s visit to the company’s production facility in Marlborough on Thursday. Feltes loads a shirt onto the dryer after watching Pipp demonstrate how images are placed on shirts.

Beeze Tees owner Tim Pipp (right) puts N.H. Senate Majority Leader Dan Feltes to work during the gubernatorial candidate’s visit to the company’s production facility in Marlborough on Thursday. Feltes loads a shirt onto the dryer after watching Pipp demonstrate how images are placed on shirts.

MARLBOROUGH — Like many businesses, Beeze Tees Screen Printing was hit hard by the pandemic. And without more aid, owner Tim Pipp is worried about its future.

Pipp discussed this and more with Democratic gubernatorial candidate and state Senate Majority Leader Dan Feltes on Thursday, when Feltes stopped by the Beeze Tees production facility in Marlborough as part of a two-day statewide campaign tour. The business does screen printing and embroidery at its Marlborough location, with retail outlets in both Keene and, as of earlier this year, Manchester.

Pipp, who has been in business for a decade, said his usual busy season is the summer, followed by a decent fall and early winter that drops off into a slow season after the holidays. But this year, most of the organizations that Beeze Tees works with during the summer, like schools and camps, were shut down.

“We got all the stimulus money, and that definitely helped us,” he said. “But if we go through what we went though this year without any more stimulus money, I don’t know how long it’s going to last.”

During the pandemic, Pipp decided to pivot to making masks, which helped the business keep things moving. But he says it’s going to take as much as six months to see how bad the damage really is.

Feltes said he supports a proposal for additional funding at the state level that would lower the cap for businesses to qualify for assistance. Where Gov. Chris Sununu’s Main Street Relief Fund — a $400 million program aimed at helping small enterprises survive the pandemic — allowed businesses that made up to $20 million last year to qualify, Feltes said he’d like to lower that amount to $5 million, making those businesses with less than $1 million in revenue a priority for any future programs.

Pipp said Beeze Tees made more than $1 million last year, but he still considers it a small business. He said the determination of what a small business is should be based on the number of employees and revenue.

Feltes, of Concord, is challenging Sununu, a Newfields Republican, for New Hampshire’s top executive position. Also in the race is Manchester’s Darryl Perry, a Libertarian.

Between Thursday and Friday morning, Feltes planned visits to each of New Hampshire’s 10 counties, stopping at businesses in each area to discuss issues that affect them daily.

During his visit to Beeze Tees, Feltes received a tour of the facility as well as a donation of several T-shirts with his campaign’s logo on it. Pipp printed the shirts but had Feltes participate by loading them onto the drying machine.

In addition to the hardships brought on by the pandemic, Feltes and Pipp discussed the right level for a minimum wage increase and how to make health care more affordable.

Feltes said that while the definition of a small business might be up for debate, there was little, if any, discussion about it when working out the details of the state’s small-business relief program.

“Everybody has a different idea of what’s a small business; we can have a debate about that,” he said. “There was no debate or discussion in the creation of Sununu’s so-called Main Street Relief Fund. He just said $20 million. He asked for last year’s revenues. He asked for your projection this year. That was it.”

Pipp criticized the application process for the Main Street program, saying the questions didn’t seem relevant. He also pointed out that both the Main Street program and the federal Paycheck Protection Program failed to take into consideration major changes to his business that weren’t reflected on his 2019 financial statements — the addition of the Manchester store and employees to staff it.

Feltes said Pipp’s experience shows how the state needs to rethink its approach to supporting its entrepreneurs, and officials “really need to prioritize COVID relief toward New Hampshire small businesses.”