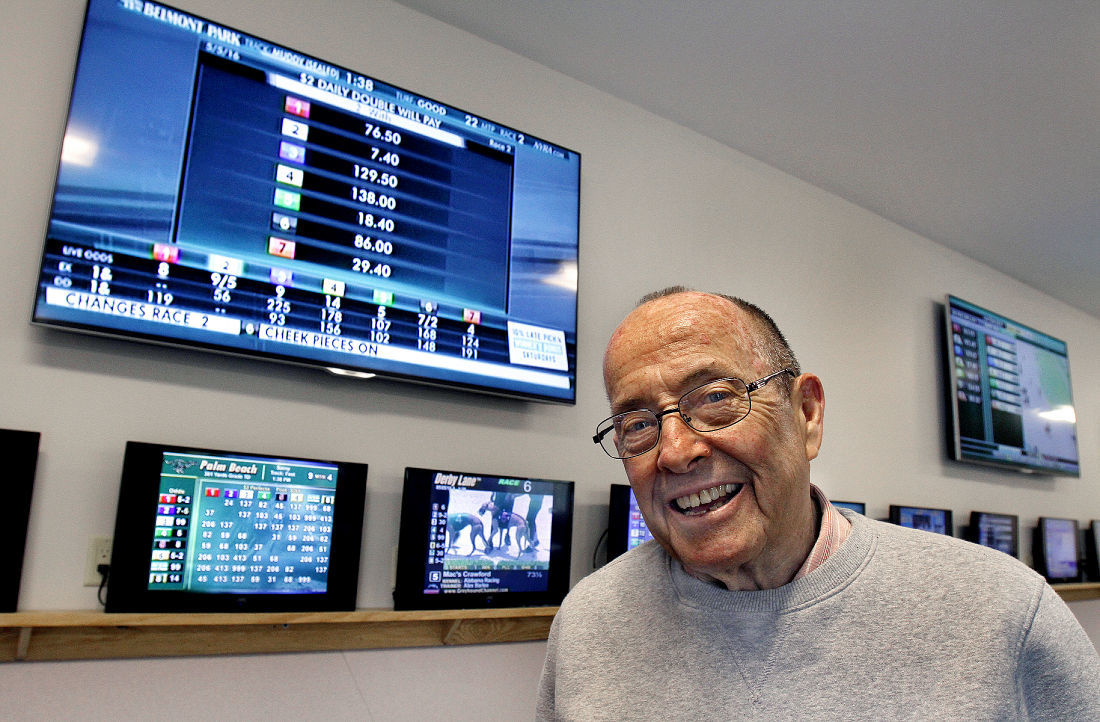 William Faucher of Hinsdale OTB, who died Aug. 6, was a legendary sulky in New England. This photo was taken in May 2016. 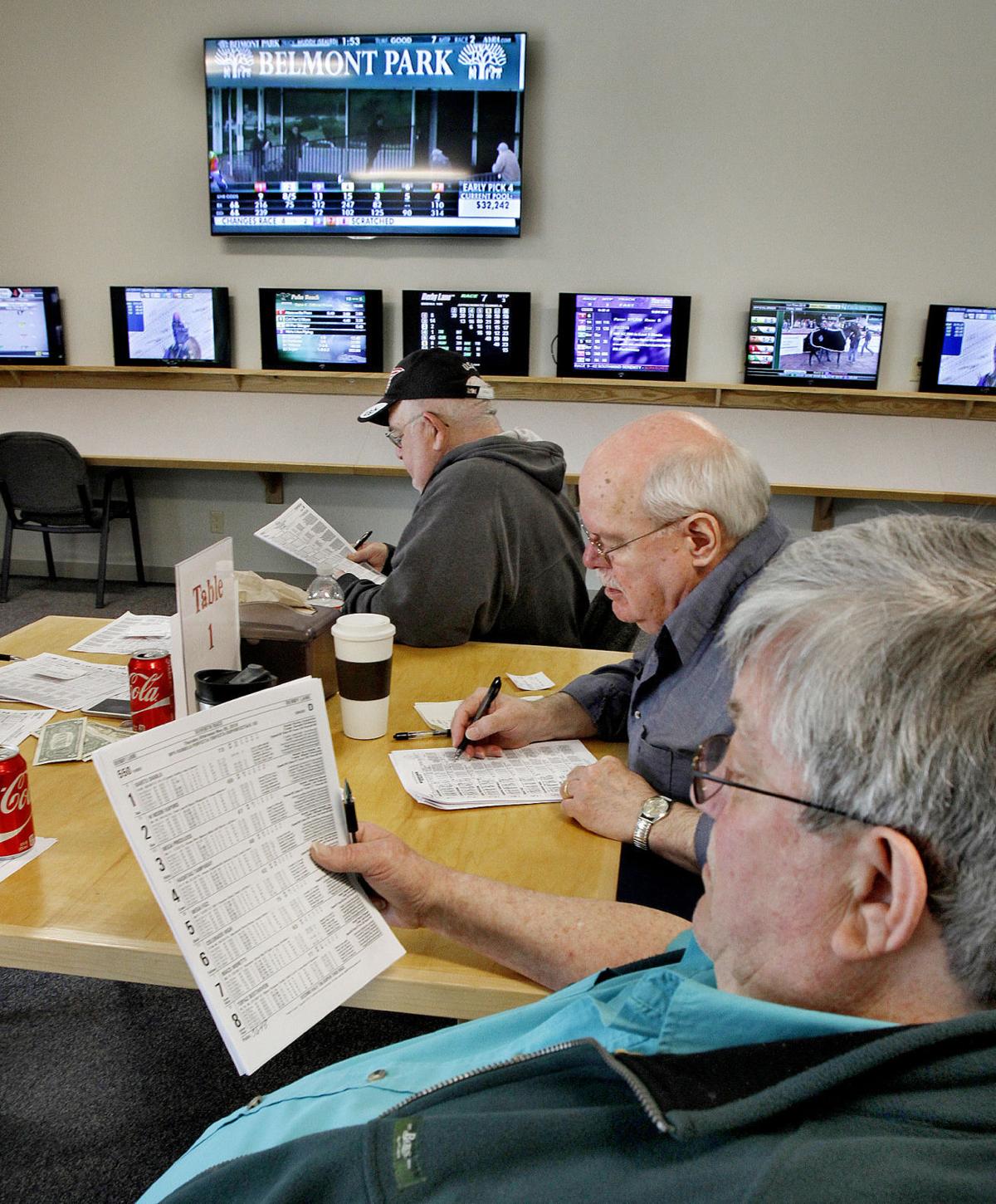 Left to right, Hinsdale OTB regulars Rob Fisher of Montague, Mass.; Lou Guetti of Greenfield, Mass.; and Kevin Lynch of Montague look over their programs in this file photo from 2016, before placing bets on a dog race taking place at Derby Lane in St. Petersburg, Fla.

William Faucher of Hinsdale OTB, who died Aug. 6, was a legendary sulky in New England. This photo was taken in May 2016.

Left to right, Hinsdale OTB regulars Rob Fisher of Montague, Mass.; Lou Guetti of Greenfield, Mass.; and Kevin Lynch of Montague look over their programs in this file photo from 2016, before placing bets on a dog race taking place at Derby Lane in St. Petersburg, Fla.

HINSDALE — Early on a weekday afternoon, when most restaurants or shops might have little foot traffic, an off-track betting facility on Brattleboro Road has drawn a small crowd. People sit at tables, fingers crossed and eyes fixed on screens as they try their luck on horse and dog races across the country.

Hinsdale OTB — which stands for “off-track betting” — is something of a local institution, particularly for its loyal customers. And that’s why a sign on the door promises the business will continue, despite the owner’s recent death.

William H. “Bill” Faucher, 80, of Hinsdale died Aug. 6 after an extended illness, according to an obituary in The Sentinel.

His daughter, Karen Gaddy of Fisherville, Ky., is the new owner. Gaddy said she and her father actively discussed her taking the reins of the business, also called Hinsdale Harness. But she said she hadn’t had extensive, hands-on involvement with the enterprise up to this point, and her cousin Chris Lord will help run it, along with Kelly Savory.

“They’re going to be instrumental in making sure everything functions correctly,” said Gaddy, who said she’s still determining whether she’ll move to this area. “They’re kind of like the right hand of the operation.”

Gaddy said there hasn’t been discussion of any major changes at this point, though there’s no guarantee.

Housed in an unassuming metal building, the inside of Hinsdale OTB is lined with TVs playing the races and plenty of seating.

“I think it’s doing well as it is, supporting those who are interested in the wagering. It’s meeting their needs,” Gaddy said.

But within about the next six months, by state law, the facility will need to open a live horse racing track to stay in operation.

Gaddy said she didn’t have any information to share about this. But it’s a pressing matter for the business’ future. State law stipulates that facilities in Cheshire County can broadcast races and allow wagering provided they open a horse racing track within four years of obtaining a license.

Valerie King is the director of the N.H. Lottery Commission’s Racing and Charitable Gaming Division, and said Faucher got his license for Hinsdale OTB on Feb. 23, 2015. Under state law, the business has until Feb. 23 of next year to host live horse racing.

If the business doesn’t comply, it will lose its license to take wagers on off-site racing.

Horse racing and off-track betting have long roots in Hinsdale that began with the opening of the racetrack off Brattleboro Road in 1958. Through 1985, the track hosted seasonal harness racing, a type of horse racing, and live greyhound racing was added in 1973.

Eventually, the business became Hinsdale Greyhound Park and OTB, adding off-track betting in 1990. But greyhound racing around the nation has come under fire in the last two decades over the treatment of dogs, and was outlawed in New Hampshire in 2011.

Hinsdale closed in 2008 after filing for bankruptcy, and the buildings were razed five years ago.

Faucher told The Sentinel in 2013 that he wanted to open an off-track betting facility because of his connections to harness racing, where he was renowned for his success both on the track and off. He was a U.S. Trotting Association director for 15 years, and in 1993 was inducted into the New England Harness Writers Hall of Fame.

Faucher was the owner/driver of a stable in Hinsdale and won 1,480 races, retiring as a sulky at age 58. He remembers when 200 to 250 horses were involved in harness racing at Hinsdale Raceway in the 1960s and ‘70s, with fans flocking there from all over the Northeast, he told The Sentinel in a 2016 interview.

Before 2012, a business was required to have, or have had, live racing to accept simulcast wagering.

The result of Faucher’s efforts was a law that carved out a special allowance for Cheshire County — here, off-track betting facilities can get a license to operate without live horse races, with the stipulation that they add a track within a certain number of years.

An amendment that passed last year extended that window from three years to four.

In March 2015, Faucher opened Hinsdale OTB at 482 Brattleboro Road (Route 119), about a mile and a half south of the former Hinsdale Greyhound Park and OTB.