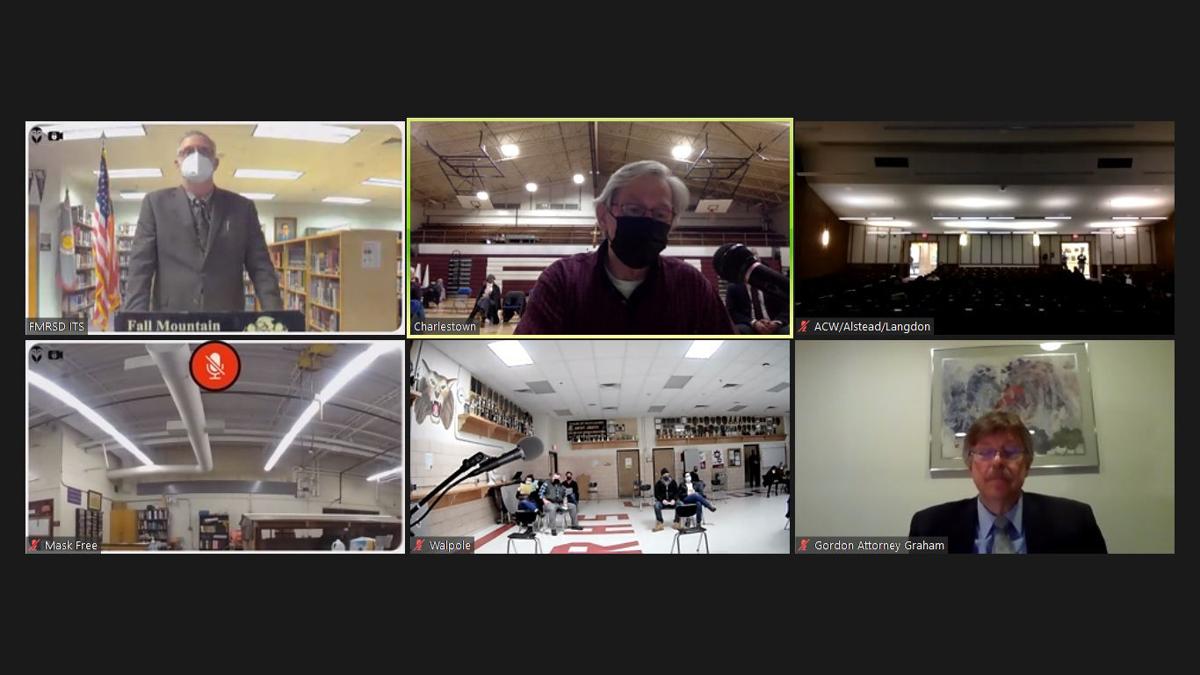 Terry Spilsbury of Charlestown, top center, proposes an amendment to prevent any budget surplus in the Fall Mountain Regional School District during the 2021-22 fiscal year from going toward the district’s capital reserve funds. The original warrant article asked voters whether to appropriate up to $500,000 to those funds, but Spilsbury, whose amendment passed, said he would prefer to see any surplus money be returned to taxpayers. 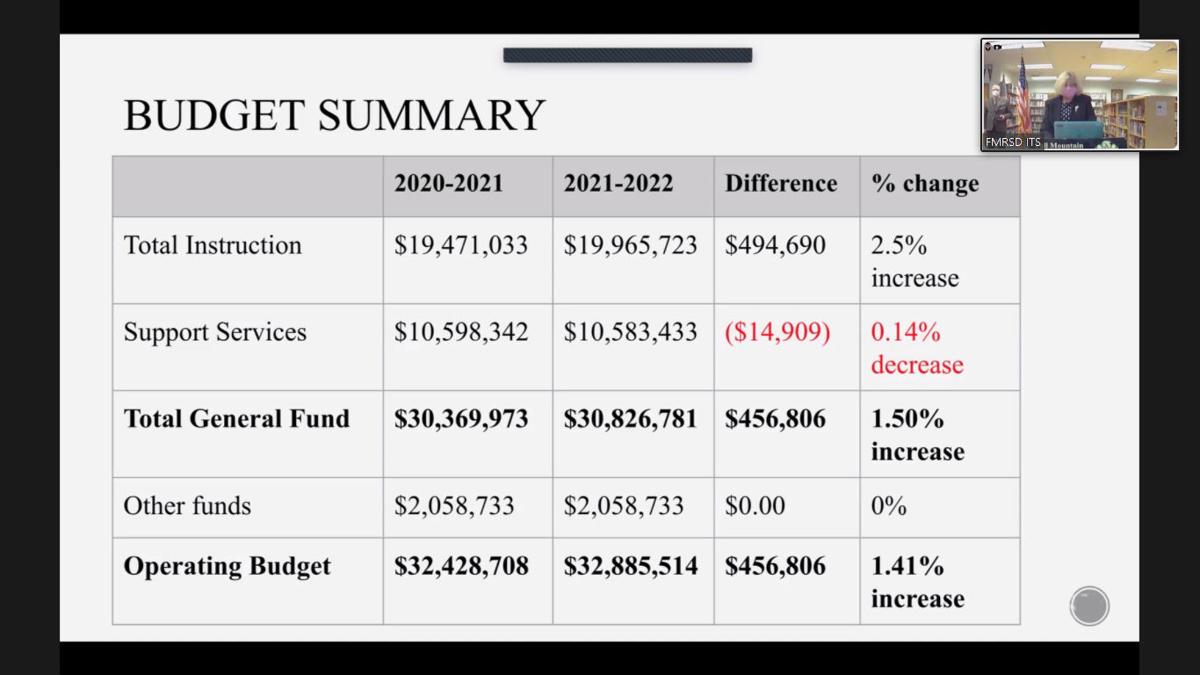 Fall Mountain Regional School District Superintendent Lori Landry, top right, presents the district’s proposed 2021-22 budget during Tuesday night’s deliberative session. The proposal drew some discussion at the meeting, but voters did not make any changes to the figure.

Terry Spilsbury of Charlestown, top center, proposes an amendment to prevent any budget surplus in the Fall Mountain Regional School District during the 2021-22 fiscal year from going toward the district’s capital reserve funds. The original warrant article asked voters whether to appropriate up to $500,000 to those funds, but Spilsbury, whose amendment passed, said he would prefer to see any surplus money be returned to taxpayers.

Fall Mountain Regional School District Superintendent Lori Landry, top right, presents the district’s proposed 2021-22 budget during Tuesday night’s deliberative session. The proposal drew some discussion at the meeting, but voters did not make any changes to the figure.

LANGDON — If the Fall Mountain Regional School District runs a budget surplus in 2021-22, the unspent money will not go into capital reserve funds, as it has in each of the past several years.

Instead, voters in the district — which covers Acworth, Alstead, Charlestown, Langdon and Walpole — approved an amendment at Tuesday’s deliberative session to reduce the amount that could go into those funds for school renovation projects from a maximum of $500,000 to zero. Terry Spilsbury of Charlestown, who proposed the change to the last article on the warrant, said he would rather have any additional funds next school year be returned to taxpayers.

“If we are so fortunate to have a surplus this coming year, I hope everybody will agree this is a time to return it to the towns,” said Spilsbury, who also represents Sullivan County District 8 in the N.H. House of Representatives.

The capital reserve fund has received $500,000 over each of the past three years, according to budget documents published by the district, and voters approved placing up to that amount in the accounts at the end of the current fiscal year.

Due to this practice, Spilsbury said the district has sufficient funds for current renovation projects. Any surplus in the coming year, he said, could provide relief to taxpayers, especially in Charlestown, where residents are projected to have to raise $1,177,803 more than last year. School officials say the 18.46 percent increase is primarily due to a loss in one-time state funding the district received last year, not any increase in expenses.

The member town facing the next highest projected increase is Alstead at 9.16 percent. Langdon’s is 3.65 percent, whereas Acworth and Walpole are projected to see decreases of 4.55 and 0.13 percent, respectively.

“With adequate reserves already in place, it makes no sense to impose upon Charlestown any further hardship than is absolutely necessary,” Spilsbury said.

“... I’m appealing to all of the voters who are present tonight, regardless of your town, to aid the town of Charlestown by agreeing to take a one-year holiday on this tradition of appropriating up to $500,000 to be raised from surplus funds and to be put into capital reserve accounts.”

The amendment, which didn’t garner any additional discussion, passed by a vote of 42-18.

The session Tuesday evening drew about 60 people to Fall Mountain Regional High School in Langdon, where voters were separated into different areas of the school based on their town of residence to allow for social distancing. About 55 people also watched the meeting on Zoom. Anyone could tune into the online broadcast, but voters needed to attend the session in person to participate. (The Sentinel viewed the session remotely.)

Aside from the amendment to the article pertaining to money for the capital reserve funds, voters offered no changes to the six other articles on this year’s warrant, though the $32.9 million budget proposal did generate some discussion.

Most of the voter input on the budget proposal came from Charlestown residents lamenting the projected tax impact of $4.55 per $1,000 of assessed value. This comes one year after the latest push in a long-running effort for Charlestown to withdraw and form its own school district, a proposal that voters soundly rejected at the polls last March.

The school-related increase to Charlestown’s tax rate would include property taxes associated with the proposed operating budget and the cost of a collective-bargaining agreement with the district’s teachers union, which is also on the warrant.

“It’s just beyond fathom to think we’re going to collect that amount of money in Charlestown,” said Albert St. Pierre, who also serves on the town’s selectboard. “I’ll leave it at that. That’s a lot of money to be raised.”

The two-year contract with the Fall Mountain Teachers Association would provide a 1.9 percent average wage increase, plus related benefits costs. The estimated costs for pay and benefit increases in the first year of the contract are $229,068, with a total increase of $461,987. The article, which voters were not allowed to amend at the deliberative session, drew minimal discussion Tuesday.

Voters also opted not to discuss any of the four articles asking whether residents will approve the use of capital reserve funds for various renovation projects in the schools. Projects on this year’s warrant:

$44,700 for a hallway retiling project at Walpole Primary School, sanding and refinishing the gum floor at Walpole Elementary School and replacing the clock system at North Walpole School

$19,700 to upgrade the failed classroom clock system at Vilas Middle School in Alstead and install a new stage curtain at the school

District residents will vote on the warrant articles at the polls March 9.