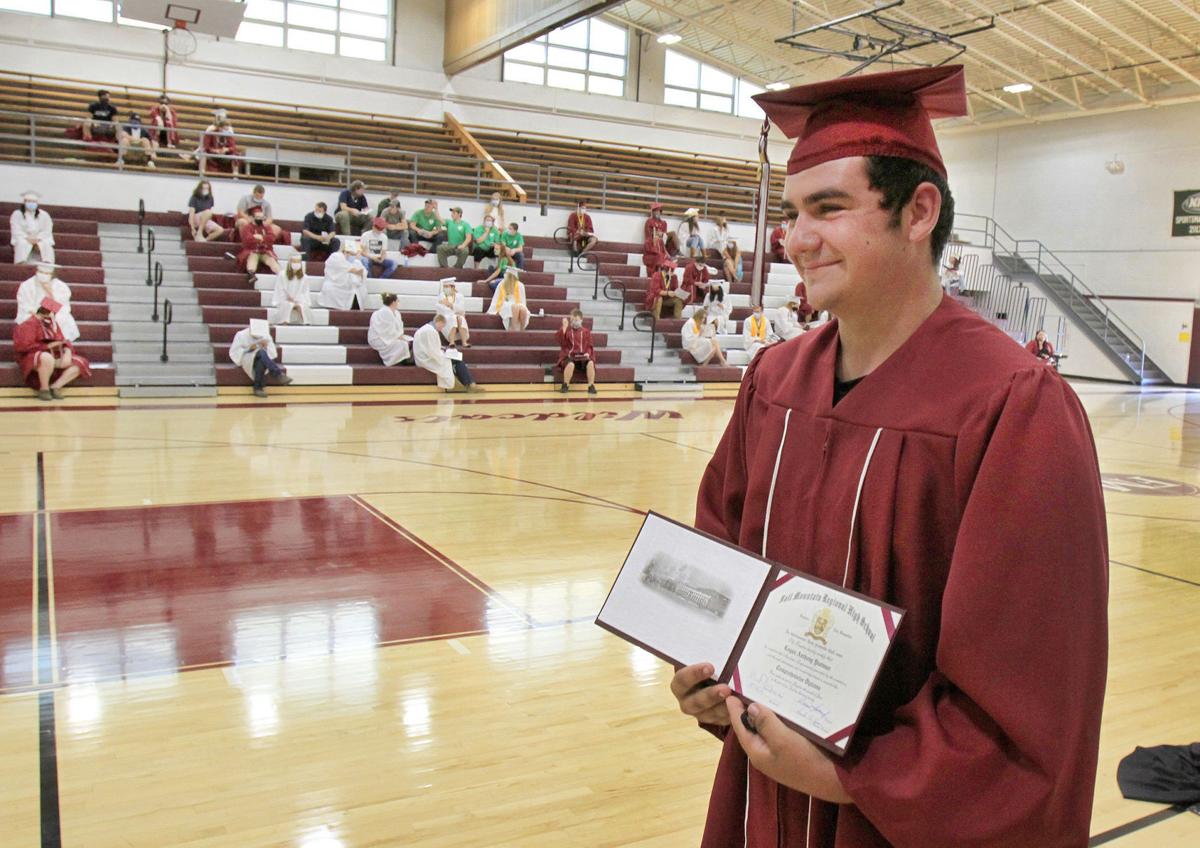 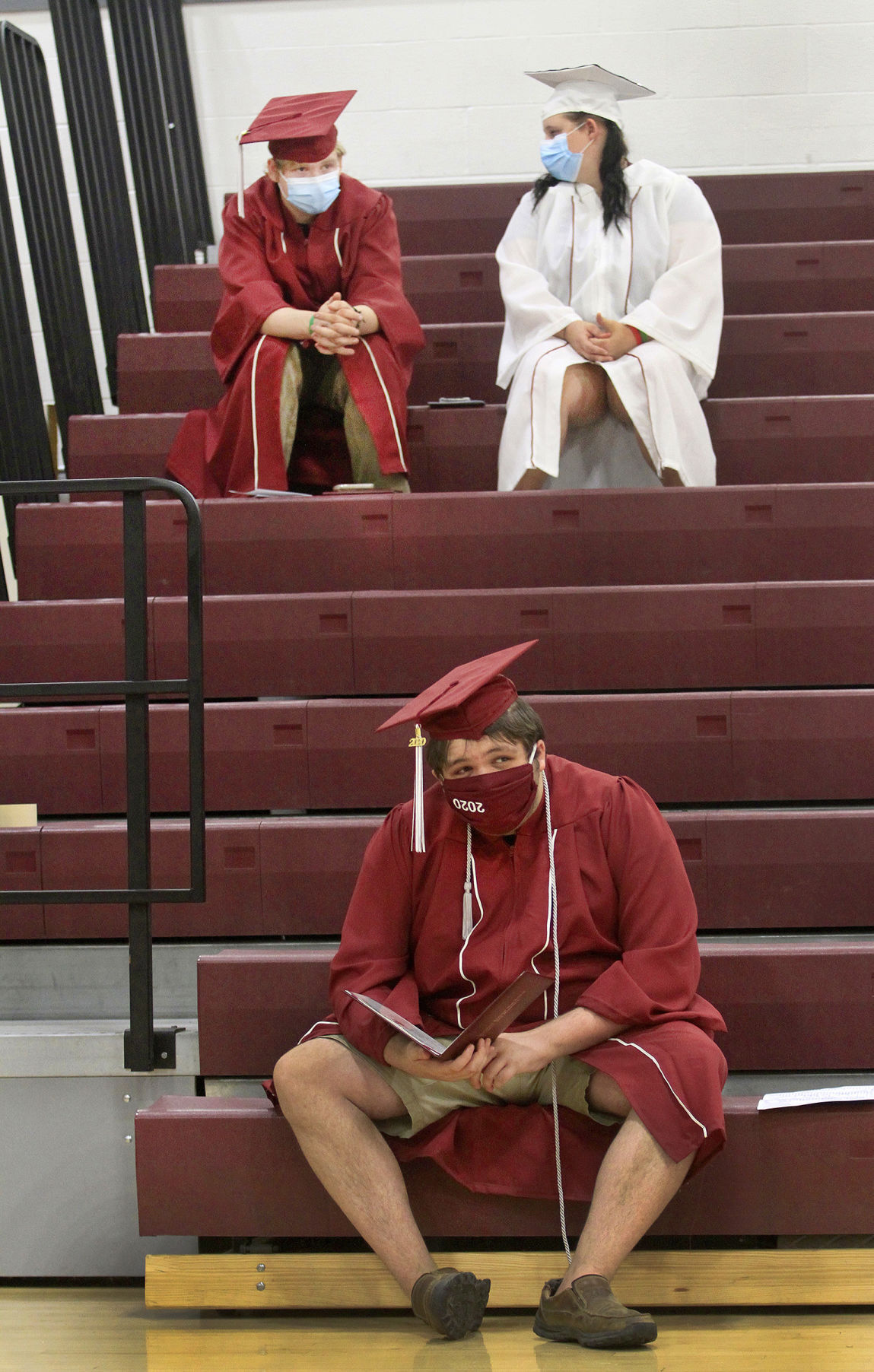 Fall Mountain graduates were the only ones allowed to use the bleachers during commencement in the school gym on Saturday. In the foreground, Justin Patnode watches the proceedings. Behind him is Daniel Pratt and Robyn Vasconcellos.

Fall Mountain graduates were the only ones allowed to use the bleachers during commencement in the school gym on Saturday. In the foreground, Justin Patnode watches the proceedings. Behind him is Daniel Pratt and Robyn Vasconcellos.

LANGDON — Many of the rituals were familiar: the school officials lined up on stage, names read one by one, cheers for classmates, relatives bearing flowers, hugs from parents, photos.

But the Fall Mountain Regional High School graduation ceremony on Saturday was also unmistakably altered by the pandemic, like so many other milestone events this year.

The class of 2020 sat on bleachers in the gym, while families waited in the parking lot. School staff members ushered small groups inside, so they could be ready when their son or daughter’s name was called. One at a time, families walked into the gym to snap photos as their graduate crossed the stage, then left through another door. Masks were removed only for the traditional graduation photo with the diploma.

“We’ve been doing graduations for 50 years, doing it the same way,” Principal Richard Towne told The Sentinel after the ceremony. But this year, in consultation with class leaders, school officials postponed it from June to August, hoping the pandemic would have faded enough to allow a traditional commencement, he said.

Instead, they had to work around social distancing and mask wearing, and forgo the usual on-stage handshakes.

“I think it went really well, especially for sort of putting together and trying to figure out how we’re going to do a graduation under these circumstances,” he said.

Fall Mountain had planned to hold Saturday’s event outdoors, with families staying in cars until their graduates were called. But with rain pouring down until shortly before the 10 a.m. start, staff switched to plan B, the gym.

Aside from brief remarks by Towne and school board Chairwoman Mary Henry, there were no speeches. Those came two months ago during a virtual ceremony that featured salutatorians Anna Bellows and Katie Nelson, valedictorian Gabrielle Klema and guest speaker Kim Lewis, a retired Walpole science teacher.

“We find ourselves in unprecedented times,” Lewis told graduates via video in June. “This is something I could never have imagined, all of which would have made an amazing, great novel if it were not true. I am so sorry for all that you are missing with this quarantine.”

She went on to list all the things they had missed, from academics to sports to concerts to spring trips to “senior skip day.”

“You have been robbed in a way,” Lewis said. “But those of us with more years and experience and perhaps wisdom under our belt know that with hardship comes growth. You will grow, and I hope we all do.”

On Saturday, the loudest applause was saved for a student who was not present. Zachary J. Campbell of East Alstead, a member of the class of 2020, died in November due to a health issue, according to his obituary.

“His passing will leave a void in the school that will be felt for years to come,” Towne said, describing him as a hard-working student and an inspiration to others. A moment of silence was held.

Wearing green T-shirts with #CampbellStrong on them, the young man’s family walked to the stage to accept his diploma. One of them carried an urn.

Fall Mountain, which covers the towns of Acworth, Alstead, Charlestown, Langdon and Walpole, is a close-knit school district, graduate James Ronning said after the event.

“We’re a family. We’ve been together for four years in high school,” Ronning, 18, of North Walpole said, speaking through a red face mask with a Keene State College owl on it. He starts there Monday and plans to study Holocaust and genocide studies, with a goal of eventually teaching high school and college students.

Ronning said he wished a full commencement could have been held safely. But under the circumstances, he was happy to have at least some kind of in-person event — not just for the students, but their families, too.

See more on Fall Mountain’s Class of 2020 at www.sentinelsource.com/graduation_2020/