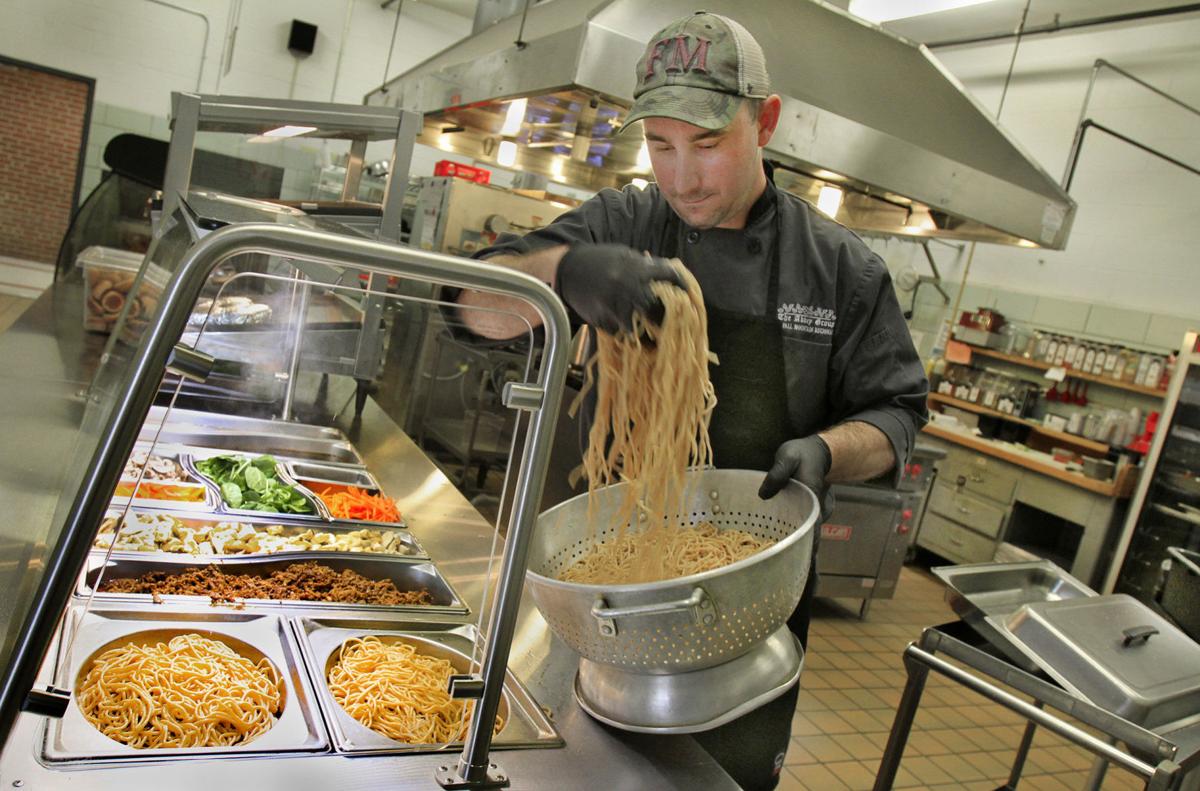 John Vigneau, the chef at Fall Mountain Regional High School, puts out the noodles for a ramen bar on Friday morning. The build-your-own-bowl station has been his most popular menu introduction to date. 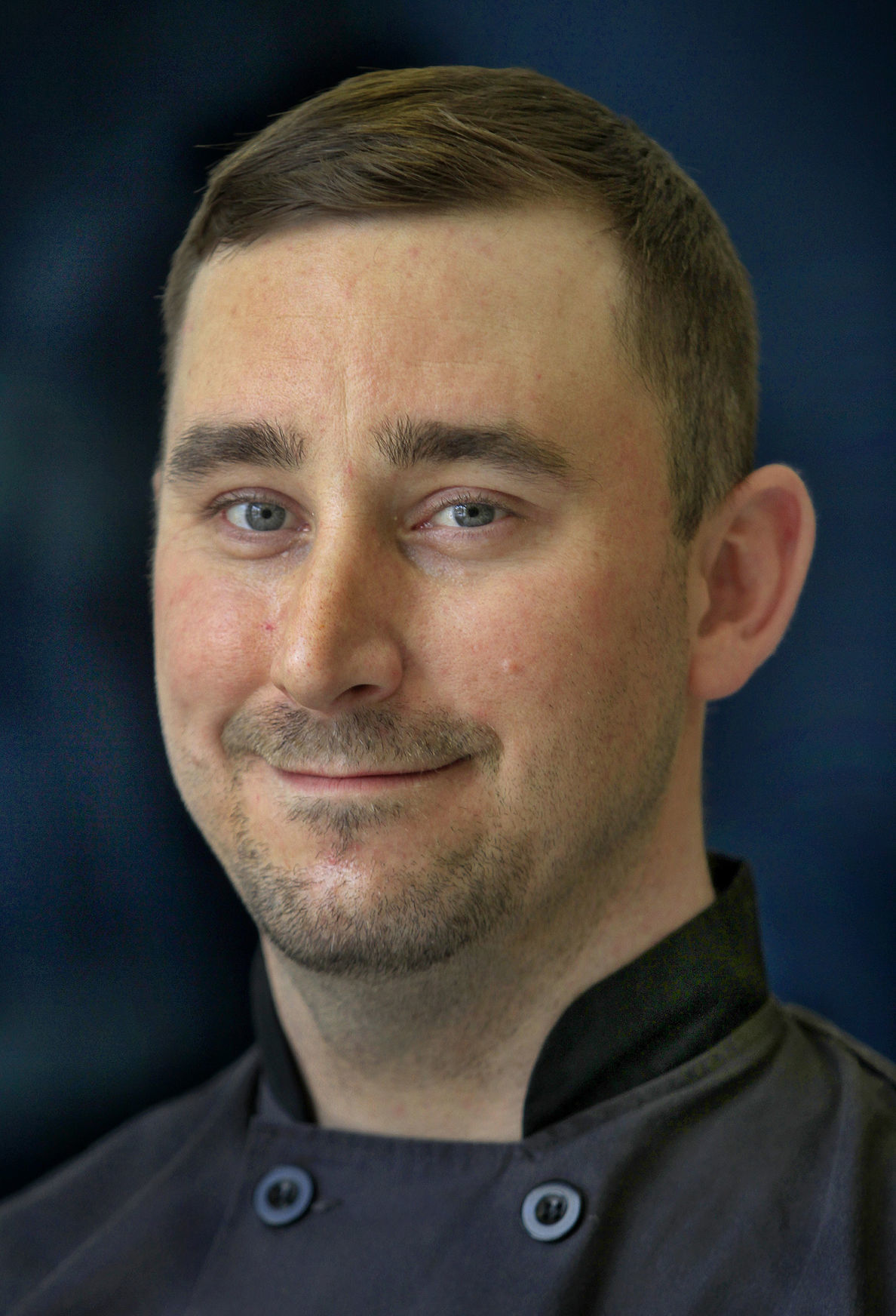 John Vigneau, the chef at Fall Mountain Regional High School, puts out the noodles for a ramen bar on Friday morning. The build-your-own-bowl station has been his most popular menu introduction to date.

And in the job he started in September, John Vigneau, 37, of Charlestown finds himself in familiar digs. He graduated from Fall Mountain nearly 20 years ago, in 2001.

A familiar face is good for getting students into the lunchroom, said Jaca Hughes, the food service director for the district. The task isn’t the easiest, she noted.

“He has family in the district, the staff know him, and he was never a big troublemaker,” she said.

According to Hughes, only 40 percent of students at the high school are eating school meals. Hiring Vigneau is one way she’s been trying to fight that battle.

Fall Mountain could also see a boost from a recently awarded $5,000 grant from the Kellogg Co. and the No Kid Hungry campaign to buy a breakfast cart to use throughout its building. The hope, Hughes explained, is that the cart will lead students to go to the cafeteria and see what else it has to offer. In the meantime, over the past year there has been a 50 percent increase in students eating breakfast at the high school — something Hughes attributes to Vigneau’s coming aboard.

“I think it starts in elementary and middle school,” Vigneau said Wednesday, taking a moment from prepping samples of Monte Cristo sandwiches for the students to try. “Maybe some of the students had bad experiences in the lunch room, so by the time they’re in high school, they assume it’s the same.”

His own recollection of school lunches is that they lacked in freshness and variety.

“Everybody’s got this stigma about school food being government food — processed food,” he said.

But Vigneau has been trying to make things from scratch with fresh, local ingredients. The bread he uses comes from Koffee Kup Bakery in Claremont, and produce comes from Black River Produce in North Springfield, Vt.

Another reason he suspects for the number of lunchboxes in the cafeteria is rising health consciousness. His goal is to prove that school food doesn’t have to be unhealthy and bland.

He said his biggest hit to date has been a ramen noodle bar — “I had no idea how popular it would be.” He makes the noodles and prepares a variety of julienned veggies, as well as two types of broth — chicken and beef — made with miso, fresh ginger, garlic and soy sauce. The bar is set up for students to build and customize their own bowls.

“Ramen doesn’t have to be prepackaged and unhealthy,” he said, “just like school lunches.”

Vigneau’s presence in the school’s kitchen has also gotten the seal of approval from Principal Richard Towne, a self-described “huge foodie.” He eats in the school’s cafeteria daily. Vigneau “is always trying to do something that’s creative, to get people to participate in the food program more,” he said.

Consistency is another thing Vigneau wants to work on within the district. He said he has been preparing meals like meatloaf and lasagna that can be easily distributed to other campuses. He hopes to one day have a single location where all of the district’s meals are prepared and sent to each school.

“My daughters go to school in the district, and they’re always excited to eat something Dad made at school,” he said.

Vigneau grew up in Walpole and lived there for 28 years. He now lives in Charlestown with his wife, Tiffany Putnam-Vigneau, 32; his two daughters, Isabell, 5, and Madison, 8; and their English springer spaniel, Millie.

In his free time, he likes to be outdoors — hunting, fishing and gardening.

He started his career in the kitchen at the Walpole Tavern as a dishwasher. After 3½ years, he started cooking. Eventually, he was running the kitchen and did so for another 12 years.

Food has always been a passion, and he describes himself as a self-taught chef. “I like working with food, fresh food,” he said. “You make people happy with the food you serve them. It’s something everybody has to do to survive.”

And it appears he’s passed that passion on.

“My whole family loves to cook. My girls help out in the kitchen whenever possible,” he said. Madison wants to become a chef some day.

Before starting at Fall Mountain, Vigneau worked in the kitchen at Cedar Hill Assisted Living in Windsor, Vt.

He said the opportunity to work in the same school district his kids are in made the shift an easy choice. “It’s closer to home, and I get to spend more time with my family on the weekends and after school,” he explained.

He looks forward to closing out his first school year, and working with Hughes to further improve the school’s program and get more kids on board.

At the heart of it, he noted, food brings people together. “It keeps you engaged with people,” he said. “I like restaurants because they are a little more creative, but this is a challenge I believe I’m up for.”

At a glance: John Vigneau