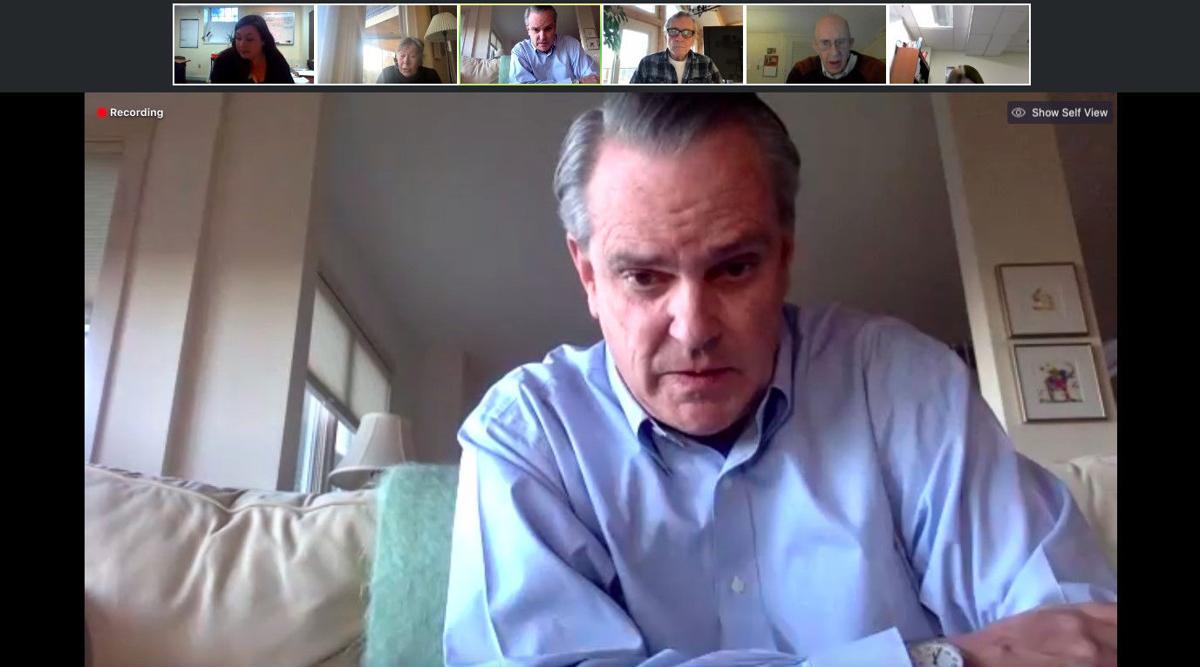 At a Peterborough Planning Board hearing Monday night, Mike Tompkins presents the 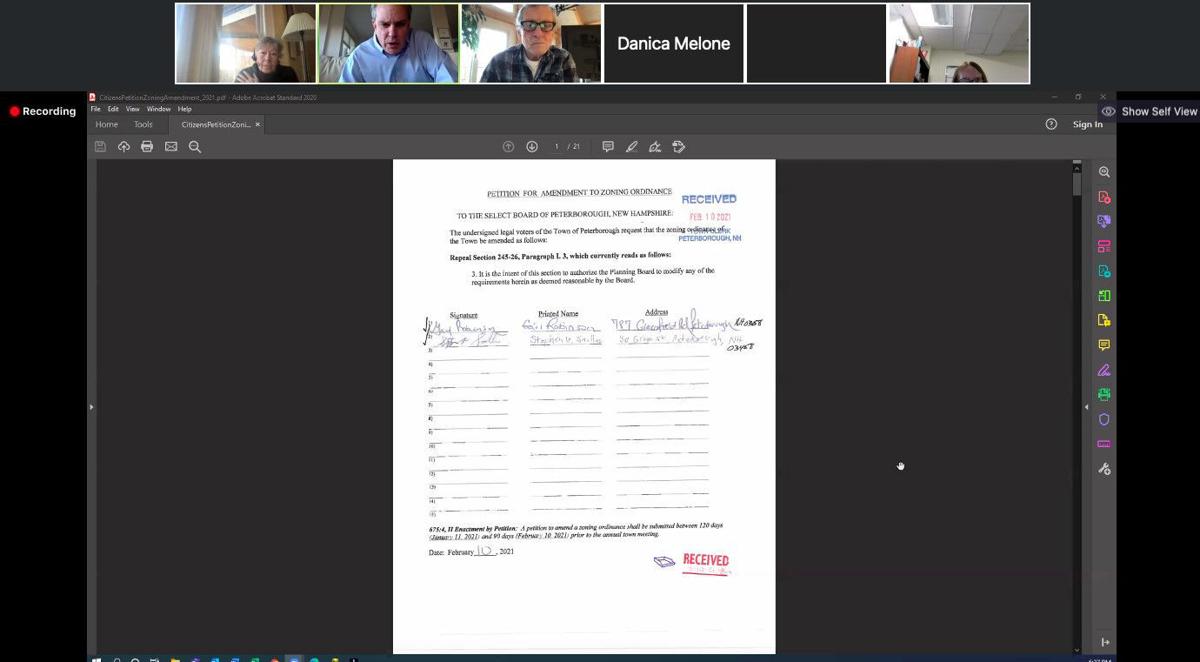 At a Peterborough Planning Board hearing Monday night, Mike Tompkins presents a zoning amendment that he and nearly 60 other residents have proposed, which would repeal the board’s authority to adjust certain regulations on a case-by-case basis.

At a Peterborough Planning Board hearing Monday night, Mike Tompkins presents the

At a Peterborough Planning Board hearing Monday night, Mike Tompkins presents a zoning amendment that he and nearly 60 other residents have proposed, which would repeal the board’s authority to adjust certain regulations on a case-by-case basis.

PETERBOROUGH — A petition to strip the planning board of its broad discretion over certain housing developments will go before voters in May without the board’s endorsement, after several members denounced the proposal Monday.

The zoning amendment, which nearly 60 residents filed with the town via petition Feb. 10, would repeal the planning board’s authority to change regulations on so-called Open Space Residential Development on a case-by-case basis.

Open Space Residential Development (OSRD) is meant to give developers flexibility, promote ecologically efficient use of the land and create housing for residents while maintaining the town’s rural character, according to Town Planner Danica Melone. Under Peterborough’s zoning ordinance, OSRD regulations control the size of residential lots and housing density, among other design features, and also authorize density bonuses if a proposed development meets certain criteria.

The existing ordinance allows the planning board, which reviews site plans and subdivision proposals, to modify those requirements “as deemed reasonable.” That clause has been in effect since 2004, planning board Chairwoman Ivy Vann said at a public hearing held remotely Monday.

At the hearing, supporters of the amendment said stripping board members of that authority would encourage a more democratic review process, promote consistency in town regulations and improve public trust in elected officials.

Several petitioners — many of whom live on Middle Hancock Road, near the former Walden Eco-Village — added that the amendment would help address their concerns with a plan currently before the board to build new housing on that site. However, the proposed zoning change would not apply to that project unless the developer submits a new subdivision application, according to Melone.

After the hearing, planning board members voted 5-1 against recommending the zoning amendment.

The measure will be on the ballot May 11 and will note the planning board’s opposition.

“That seems to me to be an anti-democratic system,” he said.

Tompkins argued that if the planning board wants to change zoning conditions for a certain development, residents should have a chance to vote on that change. Calling it “absurd” that board members can adjust OSRD regulations on a case-by-case basis, Tompkins said repealing that authority would help ensure Peterborough’s zoning criteria are applied consistently.

He encouraged planning board members to back the amendment, saying the measure would promote trust in local government and that people are not aware of the board’s regulatory power.

“I would wager that almost everybody didn’t realize that one sentence was buried there in the ordinance,” he said.

At least eight other residents spoke in favor of the amendment, largely echoing Tompkins’ arguments.

Meghann Wuorinen encouraged planning board members to consider whether they would feel comfortable if someone with opposing views joins the board and exercises similarly broad discretion. Peterborough Conservation Commission member Jo Anne Carr said the zoning ordinance should be revised to establish precise conditions under which a development would be exempt from OSRD regulations.

“There should at least be standards of review for waiving any of the requirements within the open-space ordinance,” she said. “And there should be criteria for granting any waivers.”

While some advocates urged the board to back their amendment based on ideological and practical appeals, others indicated a specific motive: checking residential redevelopment of the former Walden Eco-Village.

The planning board is currently considering a proposal from Eco-Village landlord Akhil Garland to subdivide the 52-acre property and create as many as 20 or 21 homes at the former sustainable-living community. Those units would include seven cottages that were part of the Eco-Village, with the rest being built as new construction, Chad Branon, an engineer with the Milford-based Fieldstone Land Consultants who is representing Garland, has told the board.

Thirty-four of the residents petitioning for the zoning change voiced concerns with the Eco-Village development plan at a public hearing March 15, in verbal or written testimony, according to draft minutes from the session.

Multiple abutters to Garland Way, which provides access to the site from Middle Hancock Road, said that while they had no issues with Eco-Village residents, they do not “trust” the development project. Others questioned why Peterborough officials would approve Garland’s proposal after inspectors found code violations at the Eco-Village and forced the community’s 25 residents to leave their homes in December.

Peterborough attorney Mark Fernald, representing a group that included several amendment petitioners, told the planning board March 15 that it should require lots in the new development to be at least three-quarters of an acre, to comply with OSRD regulations. (Board members had previously expressed interest in quarter-acre lots, exercising their discretion to adjust those restrictions.)

In an interview with The Sentinel, Fernald argued that the board is abusing that authority.

“The planning board is taking the position that the four pages [of OSRD restrictions] are just suggestions, which they can toss out based on that sentence,” he said.

At Monday’s hearing, multiple residents cited the lot-size issue as part of their arguments in favor of the zoning amendment.

Conservation Commission Co-Chair Francie Von Mertens said the commission is not opposed to quarter-acre lots at the former Eco-Village but would prefer that plan receive formal scrutiny, calling it the “traditional way of doing open-space planning.” Liz Peters said that under legal review, she felt the OSRD’s three-quarter-acre requirement would prevail over the proposal for quarter-acre lots.

“I don’t feel like there should be a vague mention [in the zoning ordinance] that allows this small group to decide for a greater number of us Peterborough residents,” she said, referring to the planning board.

Board member Alan Zeller said after the hearing Monday that despite his opposition to quarter-acre lots at the former Eco-Village, he does not support repealing the board’s authority to adjust OSRD requirements.

“I think occasionally we do need some flexibility,” he said.

Vann, the planning board chairwoman, encouraged residents to consider the long-term effects of the zoning change instead of its impact on the Eco-Village redevelopment. Vann added that she found it “troubling” for a small group of people to propose a major change to the zoning ordinance without extensive public debate.

Board member Sarah Steinberg-Heller told the petitioners that while she understands their distrust toward Garland, she thinks the proposed zoning change needs further consideration.

Since Garland proposed expanding the former Eco-Village before residents filed their amendment, the planning board can consider the project — and adjust OSRD requirements — as allowed by the existing zoning ordinance, according to Melone, the town planner. If he submits a different plan before town meeting, however, Melone said it would need to comply with the proposed zoning change.

“As soon as a petition is made, any new applications received after the date of the petition being received must follow the proposed regulations until Town Meeting,” she told The Sentinel in an email.

At their March 15 hearing, planning board members considered rejecting Garland’s current application and requesting that he bring a new proposal to the board, according to the draft minutes. They decided against that option, however, and asked Garland to proceed with plans for quarter-acre residential lots while also requesting hydrology and wetlands studies to weigh the development’s possible ecological impact.

Garland said Tuesday he was not aware of the proposed zoning change but called local concerns over his expansion project “misplaced.”

He defended the plan to have quarter-acre residential lots, arguing that it wouldn’t change the area’s rural character because the rest of the property would remain farmland or forest. Garland said he remains committed to that proposal, adding that he will “follow the lead of what the planning board was looking for.”

“The quarter-acre just works with this concept of clustering dwellings together … and building community,” he said.

The planning board is scheduled to continue the Eco-Village subdivision hearing April 12.