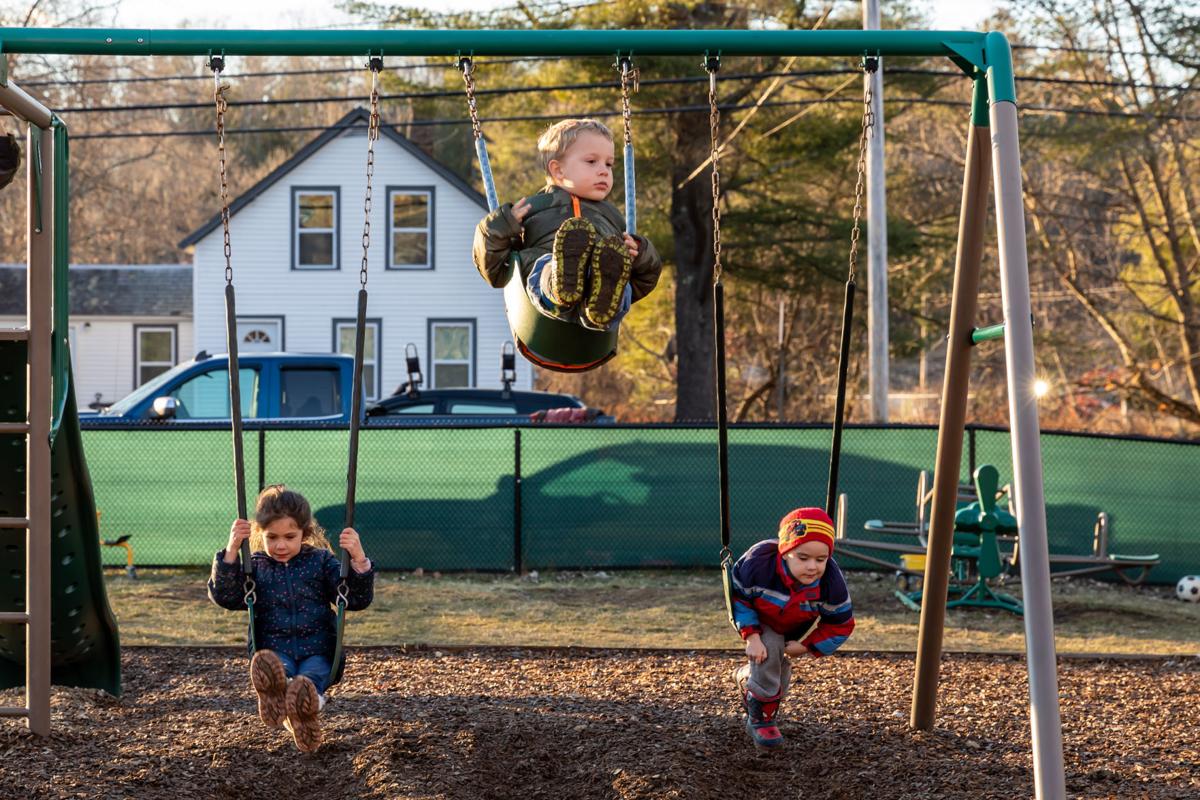 From left, Savannah Simmons, 4; Damon Shores, 3; and Tommy Hoye, 2½ are among children who attend The Winchester Learning Center 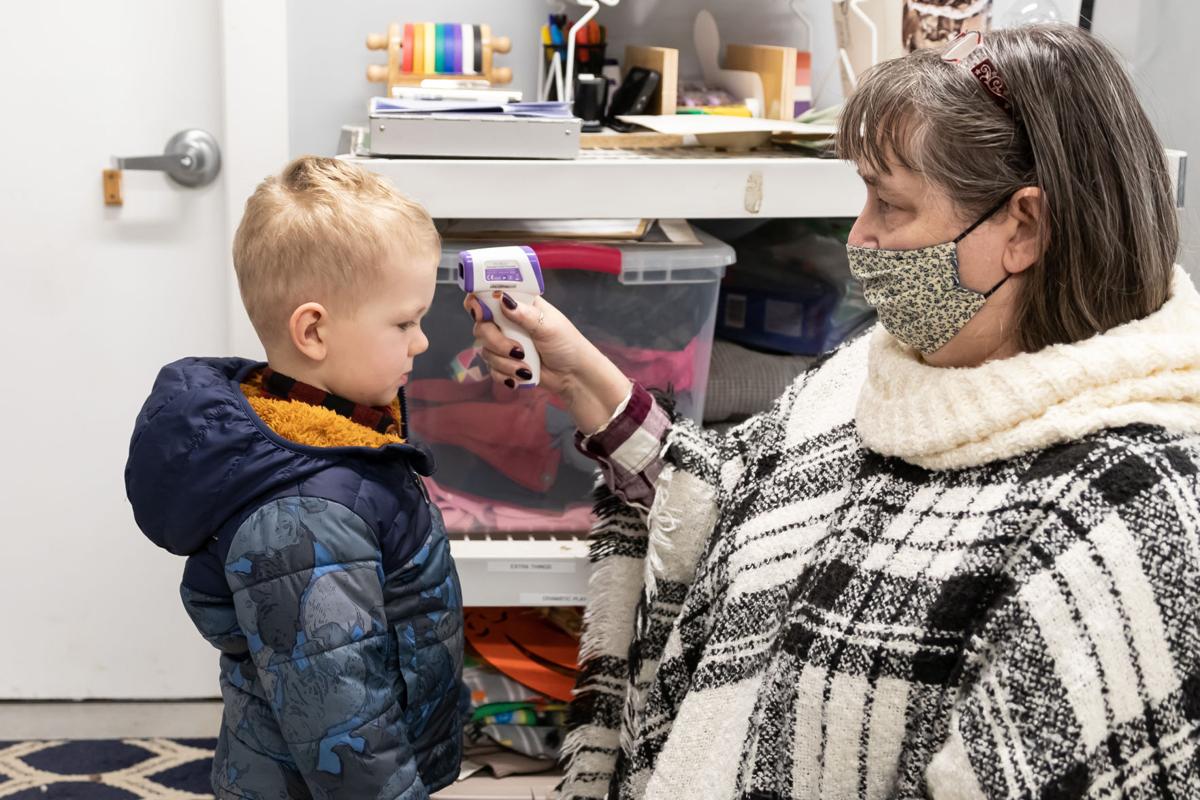 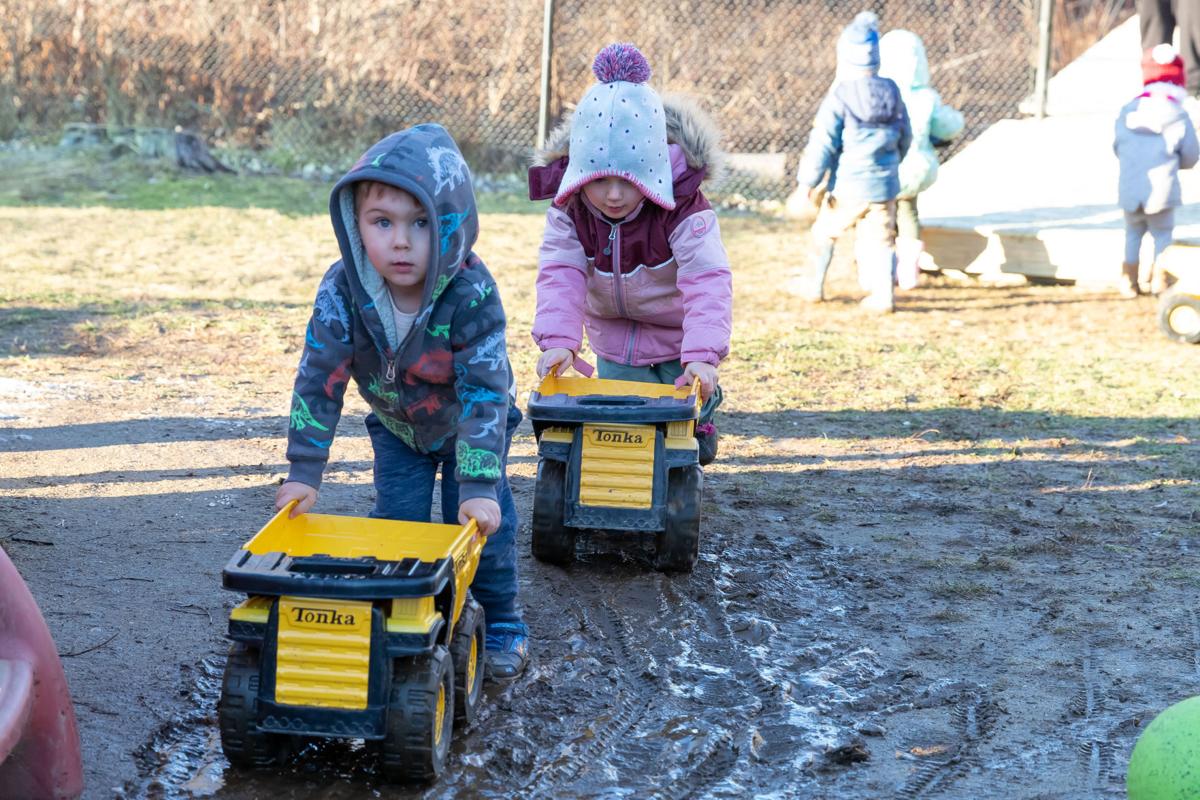 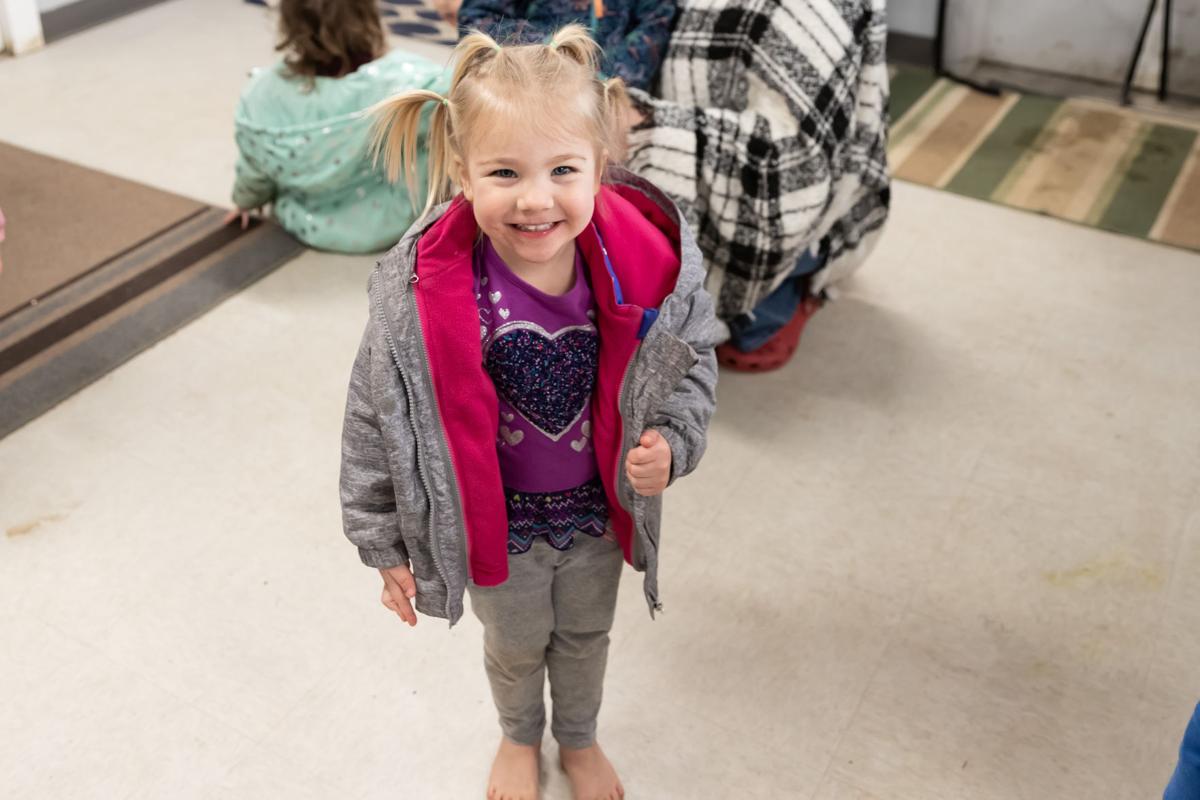 Octavia Whitney, 2½, is not quite ready to go outside Thursday at The Winchester Learning Center. 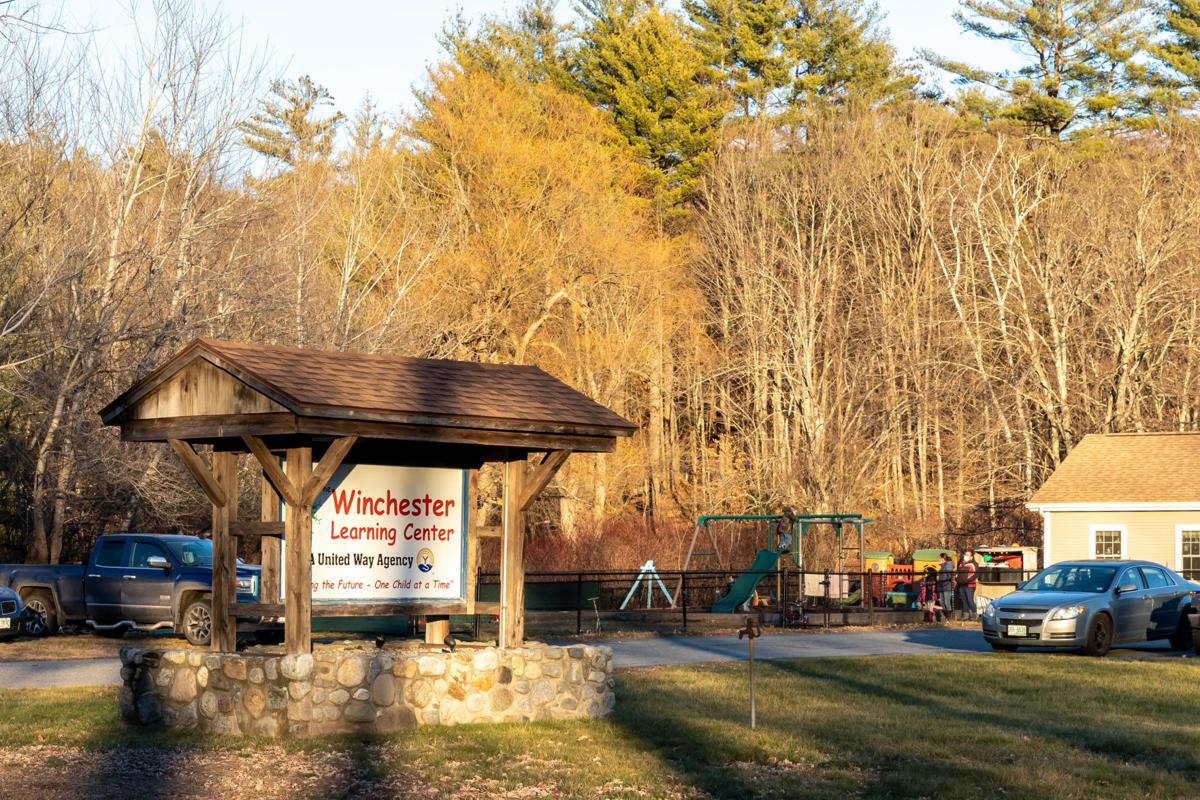 From left, Savannah Simmons, 4; Damon Shores, 3; and Tommy Hoye, 2½ are among children who attend The Winchester Learning Center

Octavia Whitney, 2½, is not quite ready to go outside Thursday at The Winchester Learning Center.

Roberta Royce has always thought of the child-care industry as resilient.

When the novel coronavirus upended businesses, schools and social systems this year, she was hopeful The Winchester Learning Center, where she serves as executive director, would find a way to keep providing care throughout the crisis.

But the challenges were significant, from the high cost of personal protective equipment for employees to a decline in enrollment as some parents opted for family care over group settings.

So the center applied for relief through New Hampshire’s Childcare Recovery and Stabilization Program and was awarded $28,200 — funds that have helped support scholarships for families and cover PPE costs, Royce said.

“It definitely made it a lot easier,” she said, noting that the center is now providing care for 42 children. “And it allows me as the director to put my attention on other critical issues instead of worrying about funding — to be able to focus on families and staff.”

During the pandemic, New Hampshire has spent more than $45 million — $35 million in CARES Act funding and $10 million in discretionary federal funds — on efforts to bolster early education and child care in the Granite State, according to Marti Ilg, deputy director of the N.H. Division of Economic and Housing Stability. More than 500 providers have received funding through New Hampshire’s stabilization program, while centers that served as emergency child care providers during the state’s shutdown have also received staff stipends and help getting cleaning supplies.

The grants are just one way New Hampshire and other states are working to sustain the child care field through policy during the health crisis. So far, the efforts appear to have had some success in keeping child care programs open — but whether these strategies will make a long-term difference for the industry remains to be seen.

Some states — including New Hampshire, Vermont and Massachusetts — have shifted the way they subsidize child care during the pandemic in an effort to keep providers from closing permanently.

In the past, child care assistance has typically been paid to providers based on attendance, meaning centers would lose that revenue during closures, or if families benefiting from assistance chose to keep their kids home during the pandemic.

Both Massachusetts and Vermont began paying subsidies to providers based on enrollment rather than attendance during the COVID crisis. And New Hampshire provided “disaster billing” payments to child care providers on behalf of students enrolled in the state’s Child Care and Development Fund scholarship program, regardless of whether the provider was closed or open and operating as an emergency center, according to Ilg.

The Bay State used a similar approach for its operational grants, allocating them on a per-classroom or per-program basis rather than by enrollment or attendance, according to Commissioner of Early Education and Care Samantha Aigner-Treworgy.

“I think that the way we used our CARES Act funding, as a per-classroom and per-program entity as opposed to per-child, really does offer a model that we were already trying to think about of how you create financing structures for the field that are more stable and sustainable,” Aigner-Treworgy said.

The enrollment-based model for subsidy payments has been recommended by some policy organizations during the pandemic, including the Center for American Progress and the Center for the Study of Child Care Employment at the University of California, Berkeley.

Caitlin McLean, a senior research specialist at the California research center, said the enrollment-based subsidy payments have helped ensure that early educators can remain employed and continue receiving a paycheck.

But the model is certainly not a silver bullet.

“This really only applies to children in low-income families whose tuition is subsidized by the state, and that is really only a small proportion of children overall,” McLean said.

She said one interesting approach has come out of Vermont, where the state allocated funds to split the cost of tuition with private-pay families while child care centers were closed. The goal was to provide financial support for providers and prevent families from losing their enrollment slots if they couldn’t afford to continue paying during the shutdown.

The program, which ended in May following the state’s reopening, was available to parents of infants, toddlers and preschoolers.

“We’ve pumped millions of dollars into the child care field on behalf of private-pay families, essentially partnering with them to pay 50 percent of the cost of tuition for the length of the closure period in order to keep these businesses stable,” said Melissa Riegel-Garrett, policy director for the Child Development Division of the Vermont Department for Children and Families.

Through the cost-sharing and other grant programs, the Green Mountain State has funneled more than $40 million in federal funding directly into the child care industry during the public health crisis, according to Riegel-Garrett, including “restart” stipends to help providers reopen over the summer and organizational relief grants to help them sustain operations in the fall.

The state also doled out $125 per week to child care providers for each child of an essential worker enrolled there during the shutdown, and helped cover tuition payments for essential workers who are parents of both school-aged and younger children. A retroactive hazard pay program allocated an additional stipend to essential workers such as early educators.

“We’ve sort of bucked the national trends so far in terms of closure because we’ve put in these investments,” Riegel-Garrett said.

An analysis published in April by the Center for American Progress, a progressive think tank based in Washington, D.C., projected that without adequate federal funding, Vermont could permanently lose 31 percent of its licensed child care slots during the pandemic. The analysis found that New Hampshire was at risk of losing 37 percent of its licensed slots.

While the pandemic isn’t over yet, neither state has seen such significant closures so far.

According to the Vermont Department for Children and Families, 104 child care programs closed permanently there between January and November 2020, while 61 new programs opened during that period. That figures out to a net closure rate of about 2.8 percent, and Riegel-Garrett said “only a few” of the programs that have closed since March cited COVID-19 as their reason.

In the Granite State, 50 child care programs shut their doors permanently, which constitutes about 6 percent of the programs in operation before the pandemic, according to the state’s Child Care Licensing Unit. The state has approved 16 new child care programs and 130 new programs for school-aged children during the public health crisis, Ilg said.

Jess Carson, a research professor of public policy at the University of New Hampshire, said it’s clear that many child care providers would not have been able to keep up with rent or continue paying employees without the federal support. But she stressed that New Hampshire’s success in stemming closures so far doesn’t mean the state is out of the woods.

“Is it enough to mean that we’ll have the same supply of providers at the end of this?” Carson said. “I think we’ve already seen some early evidence that no, we are seeing some losses already, we are seeing some doors close that will not be reopened again.”

Though many of the child care industry’s problems long predate the pandemic, educators, officials and advocates say the crisis has exacerbated existing gaps. And while area organizations have come up with some creative short-term solutions and collaborations this year, policymakers also have their eyes on the future.

State Rep. Donovan Fenton, a Keene Democrat and working parent with a 2-year-old son, said the pandemic has only emphasized to him the need to improve New Hampshire’s child care system. During the upcoming legislative session that kicks off in January, he said he plans to propose the creation of a study committee that would explore giving business tax credits to employers who provide child care stipends to their employees.

With no income tax or broad-based sales tax, the Granite State’s options for funding child care are limited, Fenton said, which is why he sees business tax credits as a potential avenue for bolstering the field.

“There’s always talk of trying to lower the [business profits tax], because they think businesses pay too much,” Fenton said. “But instead of lowering that BPT, why don’t we make it advantageous for the employer and the employee where we provide for them?”

Still, improving access to and quality of child care programs could prove a difficult task without direct state or federal dollars. Providers have long struggled to pay staff an adequate wage, while families have simultaneously found it hard to afford the often high cost of care.

“What’s important to remember is that there have been these kind of pockets of efforts, but overall, really there has been insufficient funding for child care programs,” McLean, the Berkeley researcher, said. “And so the steps that states have taken both to improve the stability of programs and the safety of educators have been extremely limited.”

Carson hopes this pandemic will reinforce the importance of child care and encourage policymakers to commit to building a better system.

“I would say this is maybe one of the best possible excuses to sort of invest in that national, federal investment in child care and to treat it more as a public good,” she said.

The Sentinel’s “Pandemic Parenting” project is supported by a competitive grant from the nonpartisan Solutions Journalism Network. The Sentinel retains editorial control.