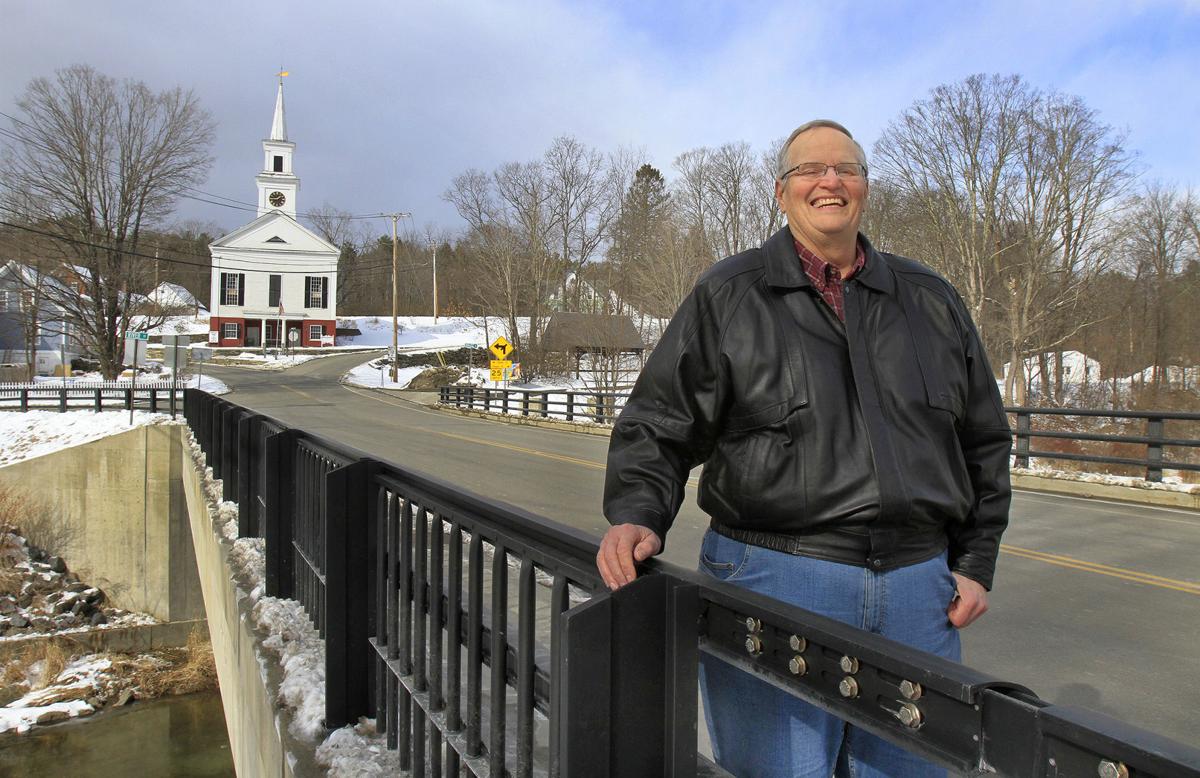 Joseph A. Levesque of Alstead stands in the village on the bridge spanning the Cold River. Levesque has been heavily involved in town and school-district affairs since he moved to Alstead in 2016. 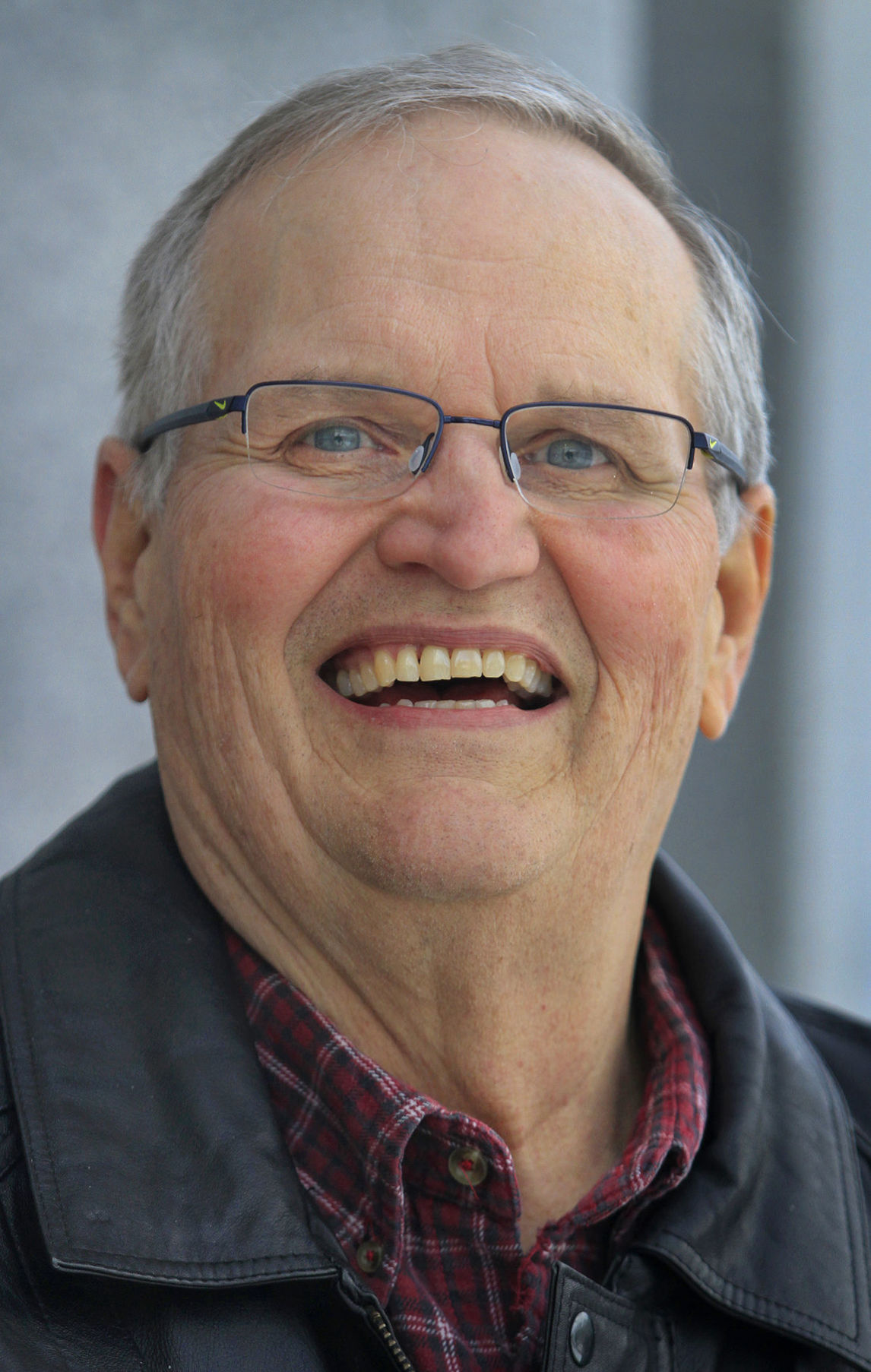 Joseph A. Levesque of Alstead stands in the village on the bridge spanning the Cold River. Levesque has been heavily involved in town and school-district affairs since he moved to Alstead in 2016.

ALSTEAD — Regardless of the topic — local government, national politics, his vegetable garden — conversation with Joseph A. Levesque will inevitably circle back to a problem he’s identified and ways to fix it.

That’s how his mind has always operated, he said; when he was a programmer, he was far better at finding errors in other people’s code than creating his own. With an eye for solutions, Levesque, who turns 66 Monday, applied a lifelong interest in learning to every stage of his career.

“While I don’t have a formal degree in anything, I’ve taken an awful lot of classes over the years,” he said.

And since moving to Alstead 3½ years ago, he’s been leveraging those same skills to make an impact in his new community. When the library was interested in pursuing grants for renovations, Levesque took courses and became the town’s de facto grant writer. After joining the Fall Mountain Regional School Board last year, he signed up for training sessions with a state organization.

Now he’s running unopposed for a seat on Alstead’s select board, poised to add that to his list of roles in retirement.

“I jumped in with both feet into all of this stuff,” he said.

Towering over most in a crowd, Levesque might seem intimidating if not for his bright blue eyes, set in a soft face that often breaks out into a broad smile.

Although he was reared in Danvers, Mass., he said the town didn’t have a hospital in the 1950s, so he was actually born in a hospital five miles south in Salem, the city that brought his parents together. His father’s family emigrated from Canada and joined South Salem’s French population, he said, while his mother’s parents left Poland just before World War I and were drawn to the Polish community in the city’s north end.

Levesque graduated from high school in 1972 as a self-described middle-of-the-road student who didn’t have a plan for his future. After floundering for three semesters at the University of Massachusetts, he left for a job as a laborer with Granite State Minerals in Portsmouth, which ships salt between ports in the Northeast.

He learned about the machinery and some of the office duties, thinking he might have a future in heavy construction, but observing other workers in the industry convinced him to pursue something new. Before leaving, Levesque saved enough money to cover eight months of living expenses and classes at Sylvania Technical Institute in Waltham, Mass., where he learned basic electronics.

With his certificate, he got a position with Prime Computer in Natick, Mass., in 1980, a job for which he said he was “woefully unprepared.” In response, Levesque took more classes, this time for programming at Northeastern University in Boston.

Levesque set himself on a career path in high-tech business, bouncing between a couple more firms over the years. Meanwhile, he met his future wife, Judith Willis, another software engineer.

“One of those workplace romances that are never gonna last? Well, it’s been almost 28 years now. I think we’re OK,” he quipped.

In 1999, Levesque launched a software engineering start-up with nine other people in Westborough, Mass., “one of the most exciting things that I’d ever done,” he said. Their company, Array, offered its services as an outsource firm.

“And I found that the most fascinating way to be a software engineer because the job would change all the time,” he said. “You’d go to a different company and do something else.”

Array later opened a software-engineering firm in China, where Levesque was sent to interview candidates. He’s kept in touch with the department head at the time, who accompanied Levesque to a pre-Belichick Patriots game during his visit to the U.S.

“To this day, I get email from him that, in China, he has found a way to stream the games so he can still watch Patriot games,” he chortled.

Levesque meets once a month with his colleagues from that era for “Chinese Tuesday,” a fond callback to the overseas business venture with old friends.

In 2007, Levesque and his partners sold Array for $30 million to Sierra Atlantic, which was bought by a consulting firm a few years later. Aside from when he was laid off during the latter acquisition and left for just over a year, he continued working for the parent companies until he retired in 2016.

“It was a great career for me,” he said, adding that he and his wife made a comfortable living. “... It’s funny, I don’t really miss it too much. I don’t do a lot of programming anymore. My only spreadsheet is showing exactly which vegetables I planted where in my garden.”

Judith’s family lives in Alstead, so the couple bought a house that summer in town.

“When I moved up here, that was the first thing my wife was saying was that I gotta find something to do,” he said.

Grateful to live on a property soaked in sunlight rather than shade, Levesque was eager to start a vegetable garden but said his wife quickly pointed out that the hobby wouldn’t last him through the colder months.

Armed with his natural curiosity and directions from Judith to stay busy, Levesque began attending the Alstead Select Board’s meetings, and he quickly got involved with nearly every volunteer group in local government. Levesque joined the town’s planning board, the board of library trustees as an alternate, and the now-defunct advisory budget committee.

Early last year, after he said Alstead’s then-representative on the Fall Mountain school board expressed interest in stepping down, Levesque was asked to take the spot by Selectman Alan F. Dustin, who has known Levesque through family for several years.

“And I thought about it, and I’m going, ‘Why would anybody want me for school board?’ I’m like, ‘I don’t even have any kids,’ ” Levesque said, laughing.

But he was encouraged by his wife and others and considered it further: “Why wouldn’t I want to try and help out kids to get a start at what is, you know, gonna be the rest of their lives?”

After he started attending school board meetings, though, he said he learned that Hogan had changed his mind, and the two vied for votes across the district’s five towns. Levesque won with just over half of the vote and secured a three-year term on the board. Meanwhile, Charlestown voters approved a committee to study possibly leaving the school district.

And then he was named to the 10-member study committee, allowing him to explore the issue in depth. Emotions were high on the committee, he said, and being relatively new to the region with no kids in the school system or “skin in the game,” Levesque felt he could approach the situation without any bias.

Researching years of finances, budgets, tax documents and records from prior attempts to withdraw led him to the conclusion that the funding formula is flawed and doesn’t consider property values enough. He didn’t find evidence of many advantages of withdrawal when looking at districts that faced similar fractures.

But he voted in favor of the committee’s withdrawal plan, noting that he never got a clear understanding of the size of the “leave” faction.

Already planning ahead, he hopes to advocate for a re-examination of the funding formula if Charlestown remains in the district after the March 10 vote.

Dustin, the select-board member, was also on the withdrawal committee and lauded Levesque for his independent thinking.

Pointing out the classes Levesque takes to continue his own education, Dustin said “he’s one of those guys that, if he feels he can be an asset, he will learn what it takes to get to that point and do his best.”

When he decided he didn’t want to run for re-election this year, Dustin said he asked his friend to consider the job because Levesque proved by joining the school board that he cares about the town.

“He has an open mind, which is, I would say, number one in being a select-board member. You got to hear both sides and evaluate in your own mind what’s best for the town,” Dustin said.

Plus, he added later, “Joe is very thorough in everything he does.”

Levesque is already brimming with ideas, such as exploring broadband accessibility partnerships and ways to improve the town office’s technology. He said he’s prepared to evaluate the workload for all of his commitments and make any adjustments needed to ensure he’s giving enough attention to the town and the school board.

Examining his eagerness to join so many boards and committees, Levesque admitted that he enjoys sifting through budget documents and learning about the processes. But there’s also an element of giving himself to his new community, of using skills honed over decades of software development and fixing code to offer something to his neighbors.

“I feel like I’m helping make a difference by looking at these things and giving my perspective on what I see when I dig into this stuff,” he said.

At a glance: Joe Levesque