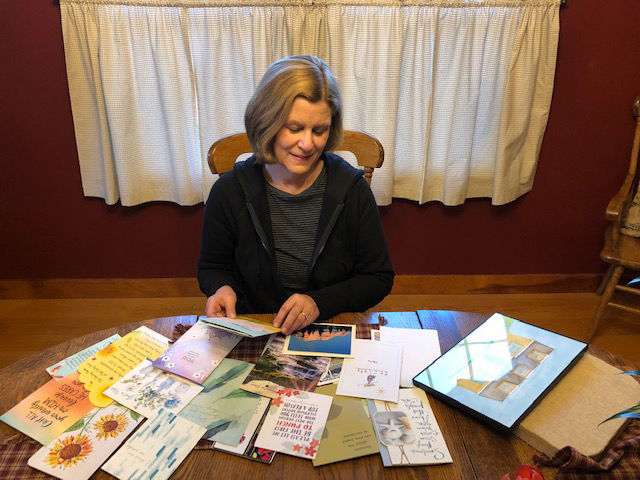 Helen Ann Kelly fondly looks through the cards she's received from friends, family and the community since her house and car were destroyed in a fire Feb. 14, just weeks after her husband, Tim, died. “I have just been overwhelmed with generosity," she said Friday. 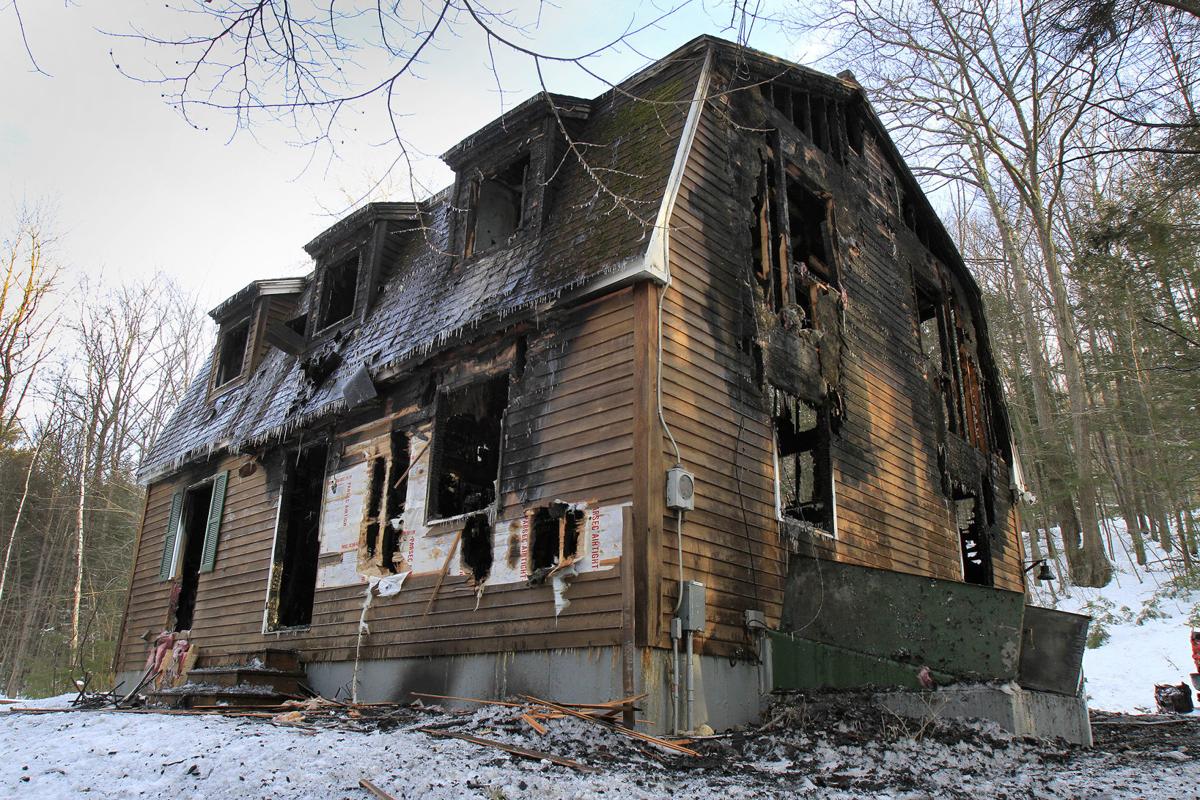 The remains of the home on Atherton Hill Road that Helen Ann Kelly's husband, Tim, built decades ago.

Helen Ann Kelly fondly looks through the cards she's received from friends, family and the community since her house and car were destroyed in a fire Feb. 14, just weeks after her husband, Tim, died. “I have just been overwhelmed with generosity," she said Friday.

The remains of the home on Atherton Hill Road that Helen Ann Kelly's husband, Tim, built decades ago.

SPOFFORD — While sorting through her grief, Helen Ann Kelly has been brimming with gratitude, too.

“I have just been overwhelmed with generosity … and I don’t know how to thank everybody personally,” she said Friday.

Kelly, 66, offered her appreciation to the team on the third floor of Cheshire Medical Center, who tried to save her husband, Tim Kelly, and to Foley and Fletcher Funeral Home for a beautiful service. She thanked the community for the support that poured in after he died so unexpectedly in late January.

She lauded the first responders who spent their Valentine’s night fighting back the flames that consumed her home.

And every day for the past week, she’s thanked God that she’s alive, that she ran out of her house when she did.

Returning from dinner with her grandkids on the evening of Feb. 14, she entered through the back door and found the dining room “smoke-filled and hotter than Hell.”

Kelly’s first instinct was to call out to her dog, Marty, but the small Cockapoo didn’t answer her cries.

“Then I looked to my left, and poof! Up went a chair in flames,” she said.

In what she admits was an odd knee-jerk reaction, she poured a bottle of water on the fire, to no avail. Having dropped her coat with her car keys in the literal heat of the moment, Kelly left the house with her purse and ran nearly the length of a football field in the snow to reach the road.

She called her daughter and 911, and a volunteer firefighter who lives nearby was at the road when Kelly got there.

“And then next thing I knew it was, like, sirens and fire trucks, and I’m sobbing. I am a sobbing, wailing mess,” she said. “… I was just maniacal and out of control.”

Losing one’s house in a raging, two-alarm blaze is tragedy enough — the fire quickly engulfed the building, and most of it collapsed — but the flames were destroying much more than a wooden frame and some furniture. Marty didn’t survive the fire, and her vehicle was ruined.

In less than a month, she said, “I lost my husband, my house, my dog and my car.”

Tim, who was 67 when he died Jan. 26, built their home on Atherton Hill Road when the couple moved to New Hampshire in the mid-’80s. His possessions, keepsakes from his funeral and tangible pieces of their life together burned in that house while Kelly stood outside, watching in horror.

Tim was inside, too. Panicked, Kelly said she screamed for the firefighters to find his ashes on the second floor, but the icy, inclined driveway made tackling the blaze a challenge for first responders.

Despite such seemingly insurmountable grief, though, Kelly reminds her friends and family that she’s a survivor. Not one to dwell in darkness, her determination lies in digging for and celebrating the specks of light.

Sifting through the rubble has revealed some salvageable items, including a safe in the basement with crucial documents and her son’s first Christmas ornament from 1981.

“It’s charred, but I have it,” she said happily.

And noting that her husband and Marty were inseparable, Kelly takes some solace knowing that they’ve ended up together: “His ashes and the dog’s ashes are on the property that we loved.”

The couple had been together for 50 years, 45 in marriage. Kelly left her two-decade career as a Chesterfield School teacher and joined Tim, formerly a self-employed painter, in retirement nearly three years ago. Spending so much leisure time together was “the ultimate contentment,” she said.

Late last month, Tim had a stomach bug for a few days, and when he didn’t improve, they went to the emergency room at Cheshire Medical Center. Kelly said he was admitted to the hospital Jan. 25, and when she returned the next morning, he looked as if he’d aged overnight.

But they shared a moment she’ll never forget.

“Unbelievably so, I’m telling you I was standing at the foot of his bed,” she said, when Tim looked at his wife with a smile and a sigh that told her they were connected in an unseeable way.

“I stepped out of the room, and he coded,” Kelly said.

Because they were together since she was 16, and she never left for college, Kelly realized she had never lived alone and was terrified of the prospect. She’s learned in the past month, though, how strong her support network is.

Since the fire, Kelly has been staying with her daughter in Keene. After buying a new car — “which I wanted anyway,” she chuckled — her plan is to find a small house or a condo in Keene. Rebuilding on the Spofford land isn’t an option emotionally or practically, she said, since she’d prefer to be less isolated now.

But Kelly isn’t rushing any decision. She also has a seasonal residence on Silver Lake in Harrisville, where she can go in the spring. The abrupt loss of everything interrupted her grieving process, and she said she’s spending time with her children and grandchildren while she processes the events of the past few weeks.

She hopes to adjust soon to what she called a “new, new normal” and return to her circuit of volunteer efforts with local food pantries, libraries and other organizations.

As someone who prefers to be in control of her surroundings, Kelly has struggled to come to terms with how much she’s lost. She laughed when remembering her attempt to exert any power over the fire: “I tried to put one bottle of water on a burning chair — hello?!”

She’s still finding those bright spots to celebrate: On Thursday she caught herself singing during a car ride, which used to be commonplace. And she’s still trying to figure out how to thank everyone on her list appropriately.

“I’ve had people offer me a place to live, a car to drive …” Kelly said. “I’m hoping next year I can pay it forward.”