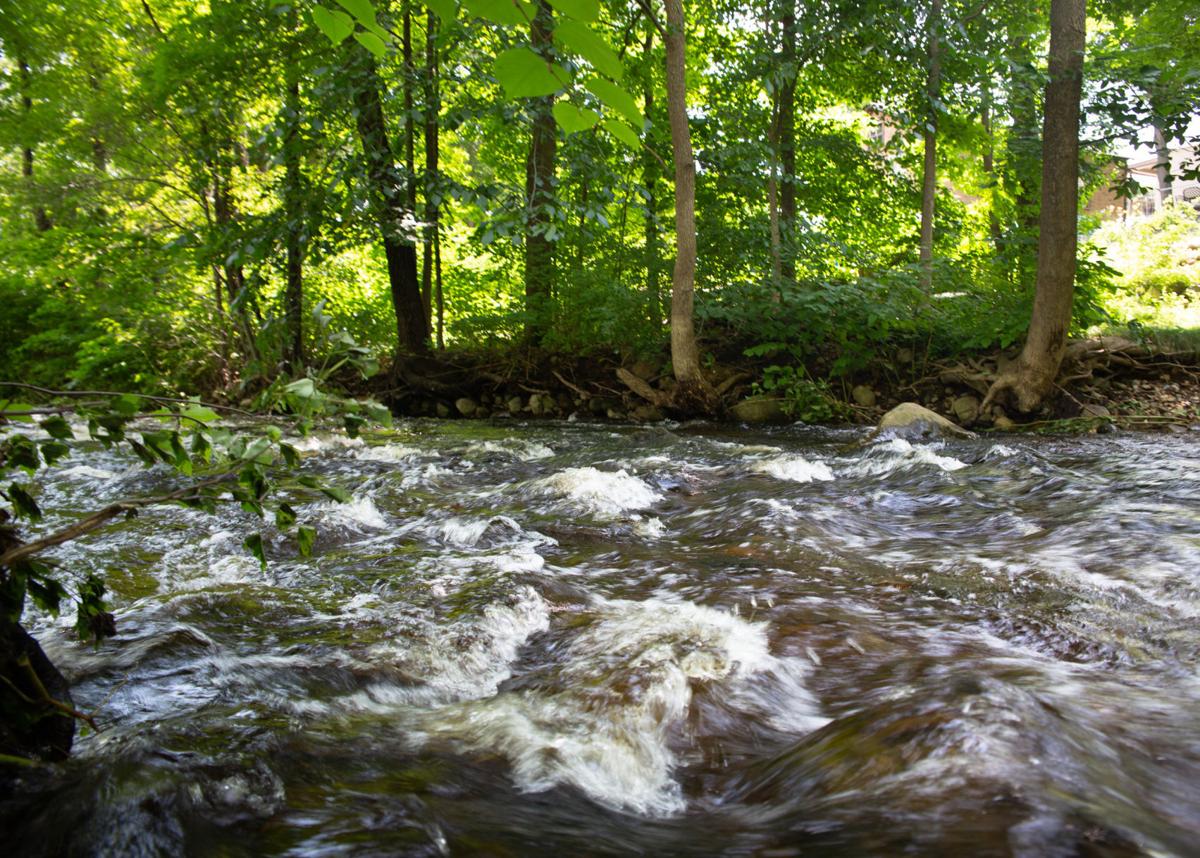 Beaver Brook, in East Keene, as photographed from Ells-Harrison Park on Thursday. 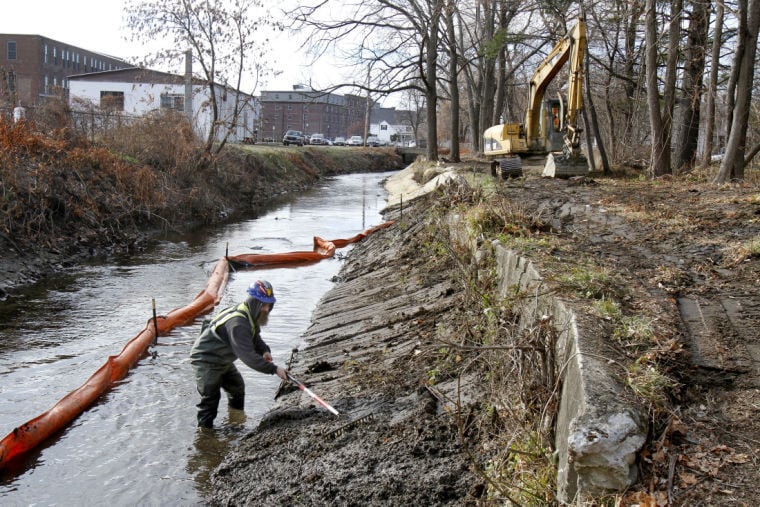 Kevin Hennessy, of SumCo Eco-Contracting of Salem, Mass., grades the banking along Beaver Brook near Harrison Street in Keene as part of a dredging project in 2013. 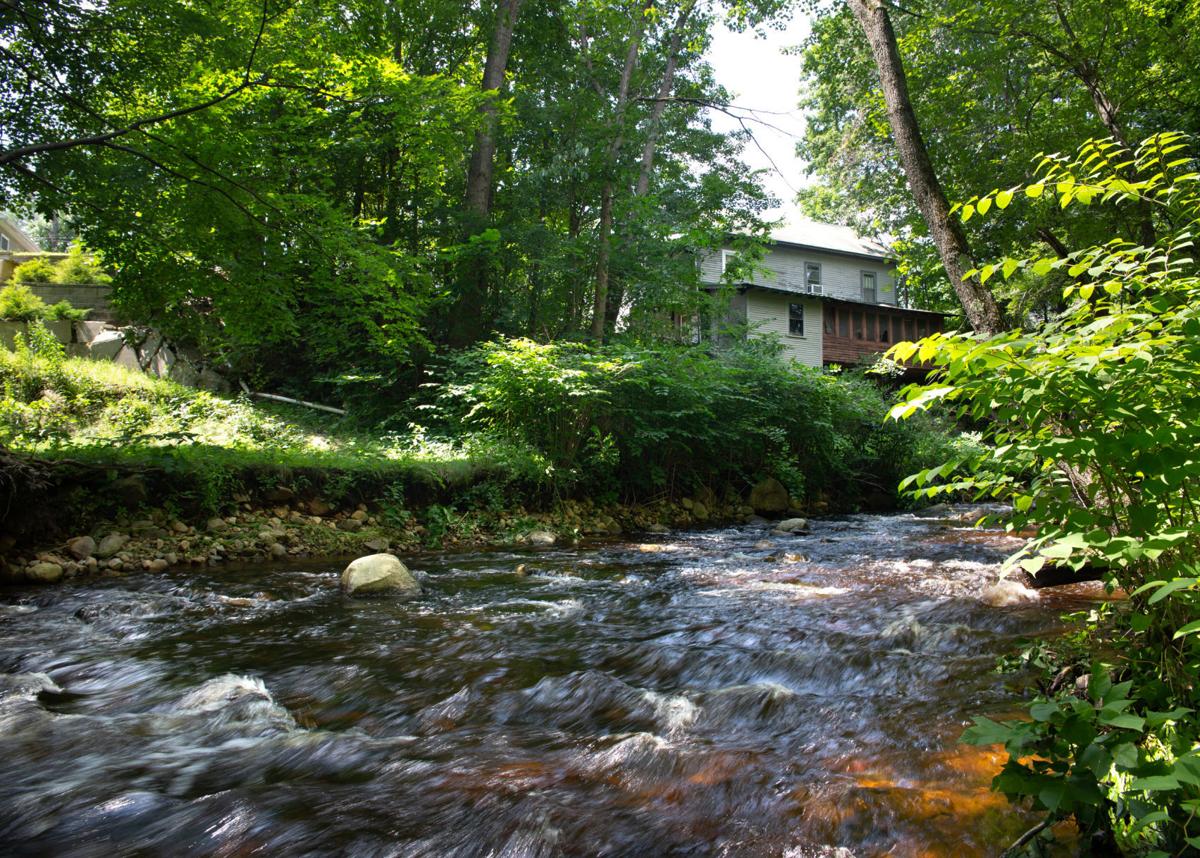 Beaver Brook in East Keene, as photographed from Ells-Harrison Park on Thursday. 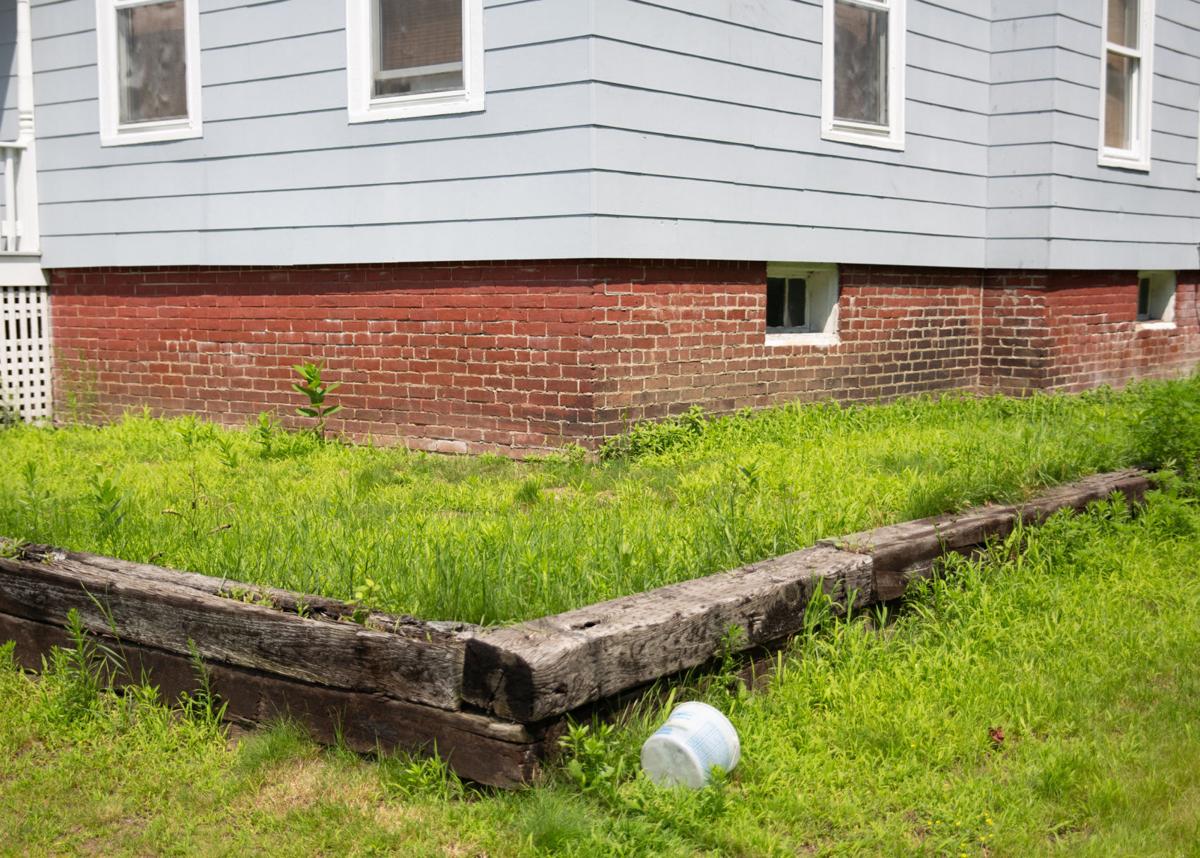 A number of homes in East Keene have been built on top of slight hills to keep water from running into basements, according to Kürt Blomquist, the city's public works director and emergency management director. This home is on Brook Street. 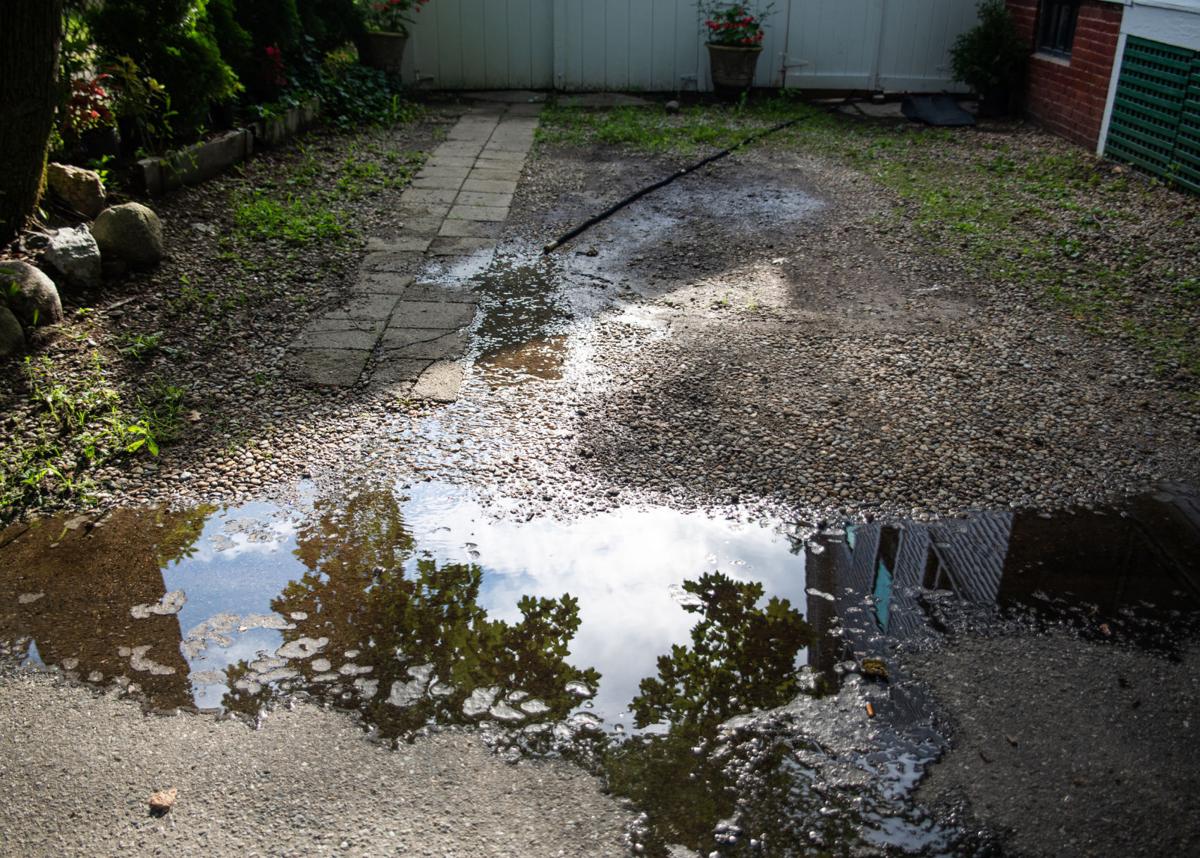 Peter Hartz uses a hose to drain floodwater from his basement on Brook Street in East Keene on Monday, after last weekend's storym. 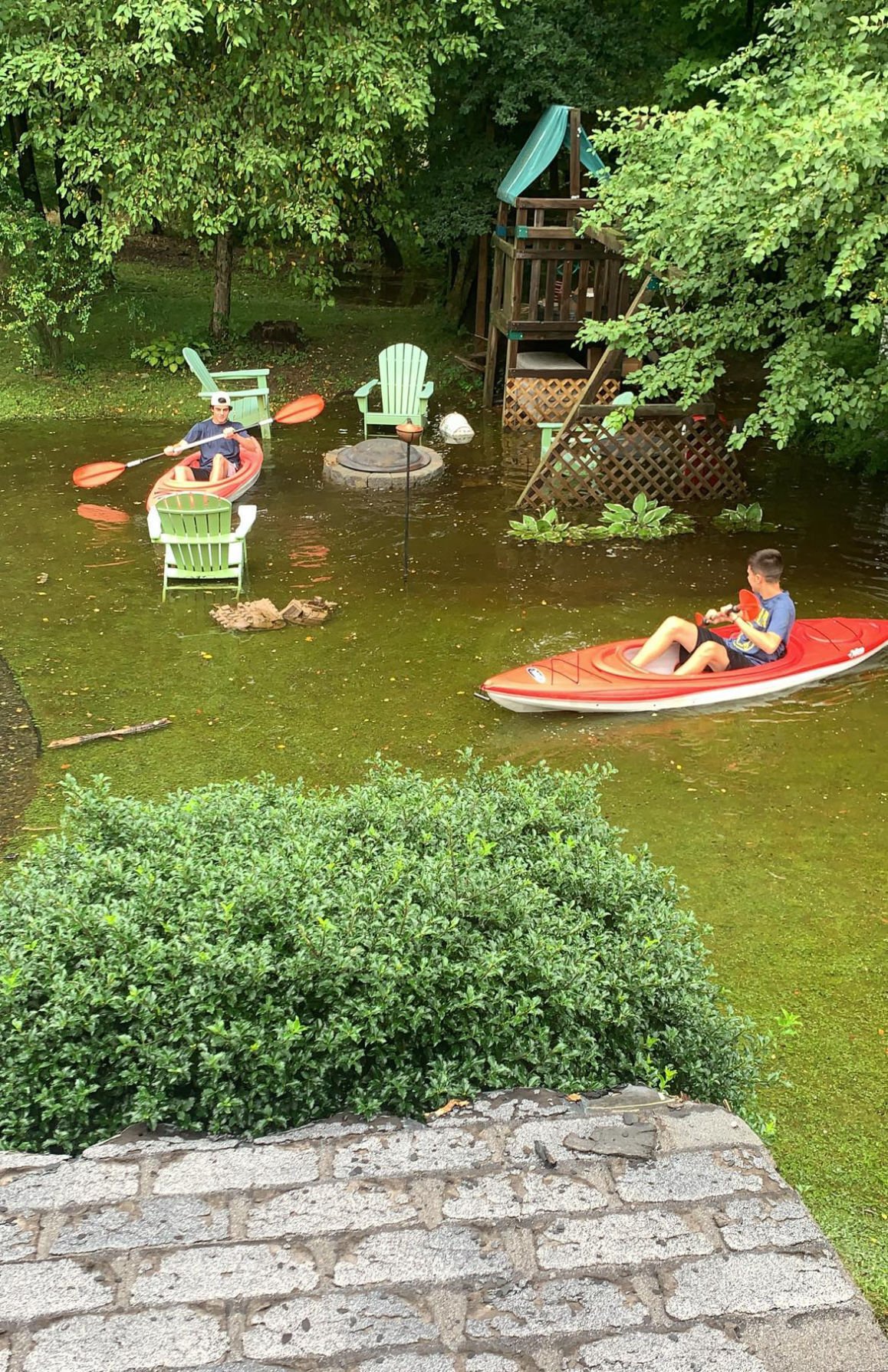 Beaver Brook, in East Keene, as photographed from Ells-Harrison Park on Thursday.

Kevin Hennessy, of SumCo Eco-Contracting of Salem, Mass., grades the banking along Beaver Brook near Harrison Street in Keene as part of a dredging project in 2013.

Beaver Brook in East Keene, as photographed from Ells-Harrison Park on Thursday.

A number of homes in East Keene have been built on top of slight hills to keep water from running into basements, according to Kürt Blomquist, the city's public works director and emergency management director. This home is on Brook Street.

Peter Hartz uses a hose to drain floodwater from his basement on Brook Street in East Keene on Monday, after last weekend's storym.

Heavy rains and flash flooding were the talk of the town in southwestern New Hampshire last weekend, but for residents of East Keene it was nothing new.

A slow-moving storm system that soaked communities throughout the Monadnock Region dumped more than five inches of rain on the Elm City between last Saturday and Sunday, causing at least two Keene residents to be evacuated from their homes and leaving dozens more to pump water from their basements. With Beaver Brook running straight through the heart of the city’s east side, houses there have long been prone to flooding, and the neighborhood was one of the worst hit locally by this recent storm.

“This goes back to the long history of water in Keene,” said Kürt Blomquist, the city’s public works director and emergency management director. “The community’s been dealing with this since the late 1800s.”

A number of homes in East Keene have been built on top of slight hills, to keep water from running into basements, he noted. He said he’s also seen houses with equipment used to strap hot water and oil tanks to basement rafters to keep them dry.

Following last weekend’s storm, several east side residents said they’re sick of dealing with recurring flooding. Peter Hartz, who has lived on Brook Street for 28 years, said he’s had to replace all his basement appliances more than once, while Randy and Barbara Beaton, of Boston Place, likewise said this was their third time dealing with a flooded basement.

“We just really feel the city needs to look at this end, the east side, not just our street,” Barbara Beaton said. “It’s happening too often.”

Blomquist said city officials have been working on this issue for decades. But flooding in Keene is still a problem, which Blomquist attributed in part to the city’s geography as well as inconsistent maintenance work over the years.

In 1969, a series of concrete walls were built along Beaver Brook between Spring and Harrison streets, he said, and in 1985, the Three-Mile Reservoir on Route 10 was built. East Keene residents reported that before the reservoir was constructed, their properties used to flood two or three times a year, according to Blomquist.

For a time, those measures worked; there was no flooding for several years, Blomquist noted. So when flooding returned with a vengeance in 2005, he said, many people newer to the neighborhood weren’t prepared.

“You then basically have a lot of people who came in who never had that experience,” he explained. “And that was part of what happened in 2005; it was the first time in almost 30 years that they experienced really bad flooding on the east side.”

After that, he said, there was a period when about every other summer would bring a significant flooding event. This pattern has since slowed, according to Blomquist, who said last weekend’s floods were the worst Keene has dealt with since 2015.

Back in 2012, the City Council heard a report from city staff about various options to mitigate flooding issues in Keene. The report was a response to concerns from residents and business owners — particularly those in East Keene — who wanted the city to do something to prevent the flooding that often follows extreme rainstorms.

Since then, Blomquist said a number of other mitigation efforts have been attempted. In 2013, Beaver Brook was dredged from Harrison Street to Route 101, the first dredging to take place in 30 years. After last weekend’s flooding, Blomquist said he has been in touch with the Army Corps of Engineers about again reviewing the Beaver Brook watershed.

Over the years, the city has also implemented several stormwater maintenance and flooding mitigation programs designed to control flooding, some of which Blomquist said have been phased out due to budgetary concerns.

And while the effects of removing those programs wasn’t visible right away, he said it’s starting to show.

“It can take years before that impact starts being seen,” he said. “What we’re seeing is more standing water. It used to be when we had 2 inches of rain we had standing water, but now we get an inch of rain, we got standing water. And those are all the indicators of the reduction in maintenance that had been occurring over time.”

After the floods in 2005, he said, the city established an inspection and cleaning fund for stormwater lines to help keep them clear and operating at capacity. This program is still active today, according to Blomquist.

Another factor in Keene’s flooding is its stormwater system is 150 years old and is due for some upgrades, particularly on the east side, Blomquist said. Often, flooding occurs when the stormwater sewers back up into roadways, he said.

He said a number of smaller drainage improvement projects have been done throughout the city since 2008, while larger-scale projects started in 2016, most recently an ongoing project on Roxbury Street.

Davis, Dunbar and Ralston streets have all been improved over the years, according to longtime City Councilor Mitch Greenwald.

“We keep nibbling away at it,” he said.

When there are large construction projects, the city tries to replace what it can of the underground pipes, he explained, but it’s a slow and costly process.

“Meanwhile citizens are dealing with issues,” said Greenwald, whose ward covers East Keene. “They need to plan for themselves too,” he said, adding that people who live in areas prone to flooding should do their best to flood-proof their homes in the ways they can.

He added that the city needs to find a balance and doesn’t want to apply any draining strategies that could overflow Swanzey, which sits downriver from Keene.

Meanwhile, Blomquist said, nature is working against the city’s flood mitigation efforts. He explained that Keene’s location in a valley makes it especially susceptible to flooding, and noted that East Keene is particularly low-lying.

In addition, he said, several streams and brooks, like Beaver Brook, run into the Ashuelot River and are unable to flow when the river fills up during heavy rain events. This causes those smaller bodies of water to backfill and spill out into surrounding neighborhoods.

Blomquist recommended several things the city could do to continue addressing the problem. They include prioritizing maintenance and infrastructure upgrades and continuing to look at development standards to help minimize the water running off properties and into the stormwater system.