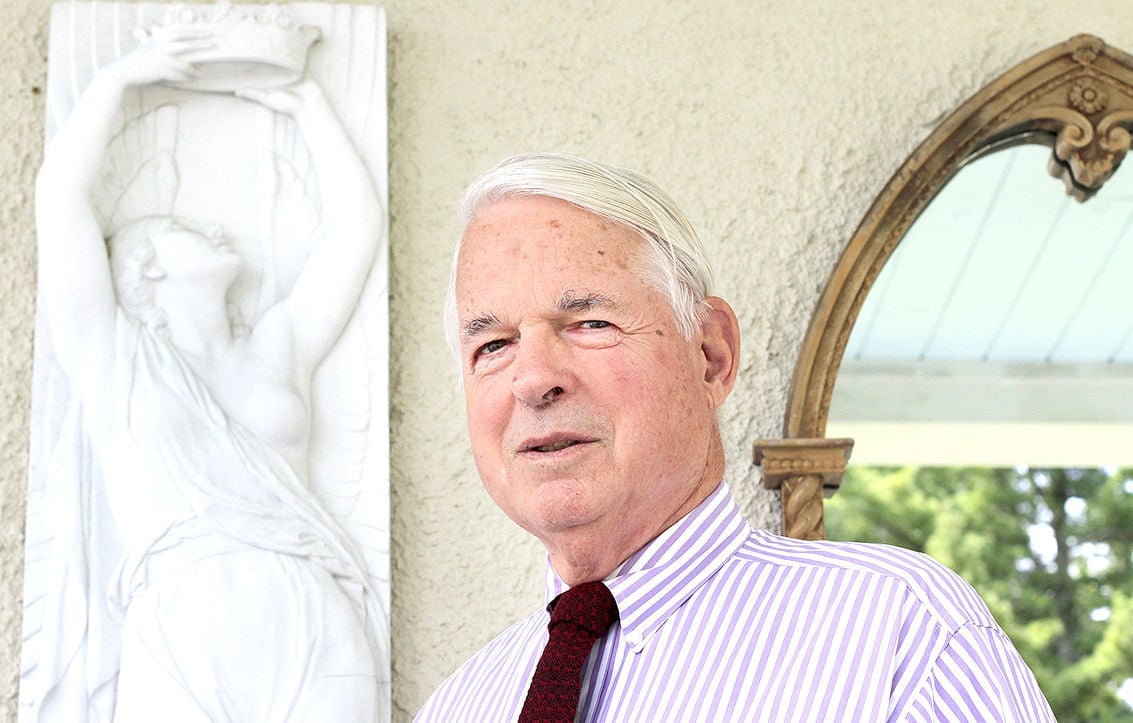 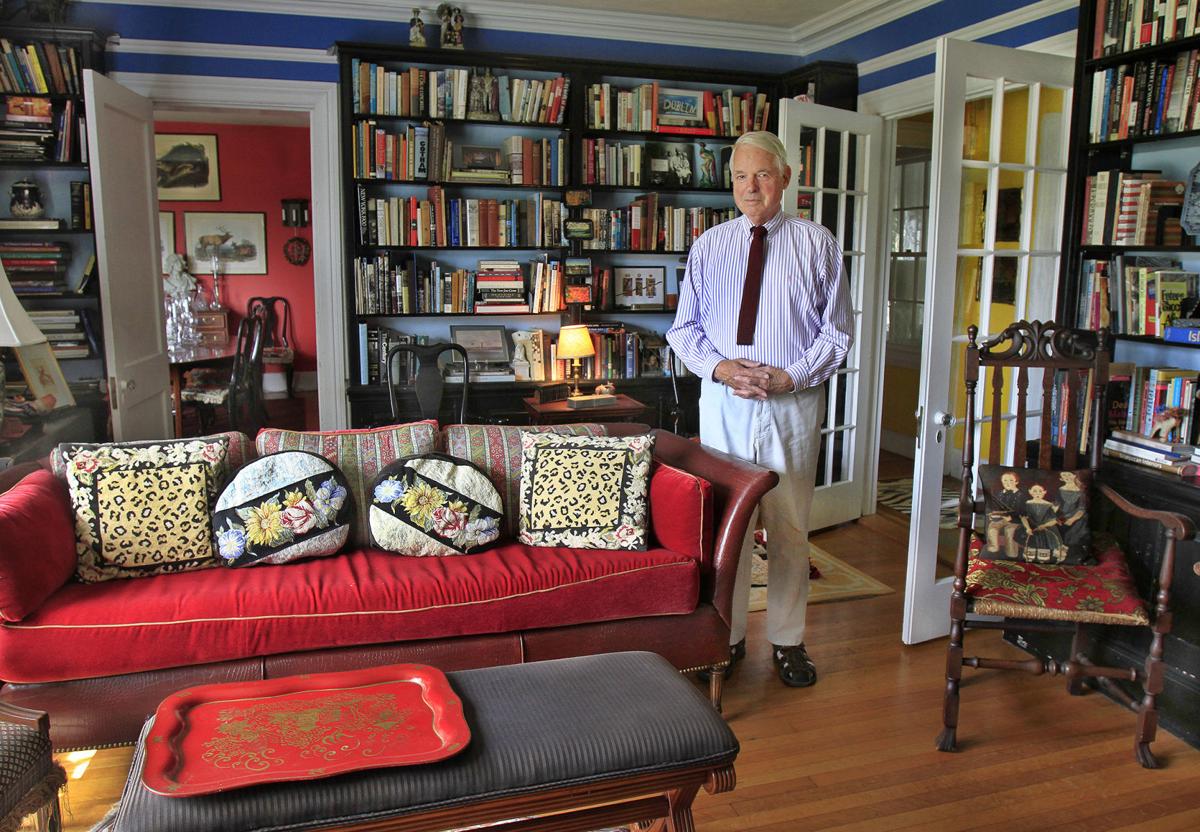 Rusty Bastedo of Dublin, shown here Thursday, can recount the history of his home along with scores of places in New Hampshire.

Rusty Bastedo of Dublin, shown here Thursday, can recount the history of his home along with scores of places in New Hampshire.

DUBLIN — There is an intimacy, an old-time closeness, among the people of this town, perhaps easily illustrated by how one goes about finding a resident’s phone number. In this case, it’s for Russell “Rusty” Bastedo, who moved here with his wife, Linda, and children, in 1997.

Despite its power and reach, the web is no help. Phone books? Where does one find them?

Sometimes, even in this Google world, one must revert to actually talking with people to get information.

“Oh, yes, Rusty,” someone responds to an inquiry at the Dublin Town Clerk’s Office in the town’s center, directly across from the offices of Yankee Publishing and its famous Farmers’ Almanac, both iconic symbols of New England. “He doesn’t like for us to give his number out, but I’ll pass this along to him, and he’ll call you.”

The reason they even have his number is because he’s well known in the area, serving as the curator of the Dublin Historical Society, a member of the board of advisers at the Monadnock Center for History and Culture in Peterborough, an incorporator of Historic Harrisville, and both trustee of the Historical Society of Cheshire County in Keene and chairman of its Collections Committee.

He’s also familiar to people around town because before he moved here, he spent time in Dublin as a child when his parents bought a summer home here just after World War II.

The 80-year-old Bastedo, who could easily pass for a decade younger, has a friendly visage, a gentle manner, and a shock of striking, straight white hair that would make him easy to spot in a crowd.

“It’s an old house, the original part is from 1840,” he says, as he opens the front door to his home in the hills across the winding Route 101 from Dublin Lake. He describes the various additions that have been cobbled together throughout the years. Inside is part museum, library and curio shop, with an eclectic collection of items he’s accumulated. The place has a cozy feel, though he says it’s a monster to heat during the winters, as are many of the old homes in New England. From the rear of the residence, which once was its front, there’s a beautiful garden (his wife’s work) and an expansive view of Mount Monadnock.

A conversation with Bastedo is a stimulating trip through the past, not only because of his deep passion for local, state and national history, but due to his long career in all things related to archives and museum curating.

From 1997 until 2009, when he retired, Bastedo was the state curator for New Hampshire, part of the state’s Division of Historical Resources. He is now co-chairman of the Wentworth-Coolidge Commission in Portsmouth, a group of private-sector volunteers appointed by the governor to help care for the Wentworth-Coolidge Mansion. The 40-room clapboard house was built as the home, offices and working farm of Royal Gov. Benning Wentworth, is a state park and was declared a National Historic Landmark in 1968.

Bastedo’s love of history is something he recalls as always having been part of him, blossoming in his teen years when he pored over books about American life in the 18th and 19th centuries. He still is an inveterate reader on all sorts of subjects.

For Bastedo, almost everything that’s old has a tale to tell. An example is his recitation of the history of his house. Originally built by a minister, it was sold in the 1870s to two brothers, both of whom were teachers. In the late 1800s, it was sold to a third-generation heiress to the G.P. Putnam’s Sons publishing company of New York City. “She had a deformity, giving her the face of the butt end of a hatchet, so she wore a veil all the time,” he says. She died in 1929, after giving her fortune away. The home was then sold to Robb and Beatrix Sagendorph, the founders of Yankee Magazine, and remained in that family until the Bastedos purchased it.

And these are just his stories about one structure, only a tiny fraction of the almost infinite details of what Bastedo knows about the past in scores of places in New Hampshire. As part of his job with the state, he read the published history of every town, village and city. He also is the author of “The Portrait Gallery: Governors and Early Leaders of New Hampshire” (Plaidswede Publishing, Concord), a decade-by-decade history of the state from Royal Gov. Simon Bradstreet in 1679 to Gov. John Lynch, whose term ended in 2013. It is richly illustrated with portraits and photographs of each leader.

But besides the historical facts and statistics, Bastedo’s comments about what they signify are probably more compelling. For example, he says, while Dublin may have been the bucolic setting visited, praised and written about by such personages as Henry David Thoreau and Ralph Waldo Emerson, Keene was the region’s ugly, industrial core, populated with mills, tanneries, factories and heaps of coal — “a smelly, sooty place with a very polluted Ashuelot River. That was the price of progress, the filth of the mills,” he says.

Life was very hard for people living in that distant past, he notes, fraught with accidents, disease, and body-breaking labor. Although many people probably think this area has always been this wooded, 150 years ago, it was mostly pasture, the trees and their roots having been removed by hand, with the help of horses. Every year, fields were cleared of rocks, often with kids from local orphanages providing the labor.

Temple Mountain, he says, has for more than two centuries served as a force field separating the Monadnock Region from the remainder of the state to the east. “Temple is the barrier from the urban sprawl of the coast; it’s the great divide,” he says. “People who invest in real estate curse that mountain because they’re stopped there.” He doesn’t think that’s a bad thing.

Meanwhile, the mountain for which the region is named, the Grand Monadnock, is what he calls the “mystical center, the heart and the soul” of the region and perhaps New England, having been seen as a special place by Native Americans, the first white settlers, and then by artists, philosophers and writers.

Dublin, too, represents a story about New England, he says, an example of how the region has suffered from depopulation starting just after the Civil War. “In the 1870s, they thought it was the end of the town; the boys didn’t come back after the Civil War. They went West,” he says.

When his parents bought a house in town right after World War II, “they were met with open arms here in Dublin,” he says. “It turns out they were the only people to settle in town that year; everybody thought the town was on its last leg.”

Regardless, Dublin soldiers on, he notes, the townspeople proud of its heritage, as is true in most Yankee villages.

Although now a resident of a quintessentially rural New England location, Bastedo was born and raised in Manhattan, his father, Philip, a prominent corporate attorney and his mother, Helen, a volunteer with Planned Parenthood. The organization was founded in 1916 by Margaret Sanger as the American Birth Control League before changing to its current name in 1942.

Wanting to see the West, Bastedo enrolled in Colorado College in Colorado Springs and graduated with a bachelor’s degree in English. “I met a lot of Midwestern Republicans for the first time,” he says with a smile. Parenthetically, Bastedo remains an ardent progressive Democrat, and is a severe critic of the Donald Trump administration, calling this a time of “national emergency.”

After college in Colorado, Bastedo went on to conduct post-graduate studies at Stockholm University in Sweden and The New School for Social Research in New York City and earned a master’s degree in American studies at the University of Delaware.

After that, he joined a large chemical company, Hercules Inc., of Wilmington, Del., working in its international sales division.

“I found that wasn’t for me; I would have had a heart attack by age 40 from the stress,” he admits.

Through the mother of a classmate, he learned about a job at the Winterthur Museum, Garden & Library in Delaware. He ended up working there for three years before becoming director and curator of the Kenmore Association in Fredericksburg, Va., where he was responsible for the building of a new museum.

“I got a decent reputation in the museum field,” he explains, and then went on to be the director of the Long Island (now Brooklyn) Historical Society, followed by the Stamford Historical Society and eventually the Connecticut River Museum in Essex, Conn. He applied for the job in New Hampshire because he wanted to return to New England.

One of the most arduous tasks of museum and archive management, according to Bastedo, was writing grants. “That’s tough work, but that’s how it’s all funded,” he says. “But I have to say that it was my happiness, this work; I do enjoy what I do. That’s lucky, because so many go to work every day dreading it; they hate it.”

Even though much of his focus has been on the study of the past, he expresses a wish list for the future. One wish would be for a reconciliation between the Republicans and Democrats, another a resumption of a military draft as a unifying force, and a third, a return to concentrating more on teaching history and foreign languages to young people.

“I like to evoke Tip O’Neill, the Boston politician, who could after the day was done sit back and be friends with his Republican rivals,” Bastedo says. “He always said that ‘all politics is local,’ and I’d urge young people to realize that, to look at what’s in front of them, at the trees, not the forest.”

At a glance: Rusty Bastedo

At a glance: Rusty Bastedo