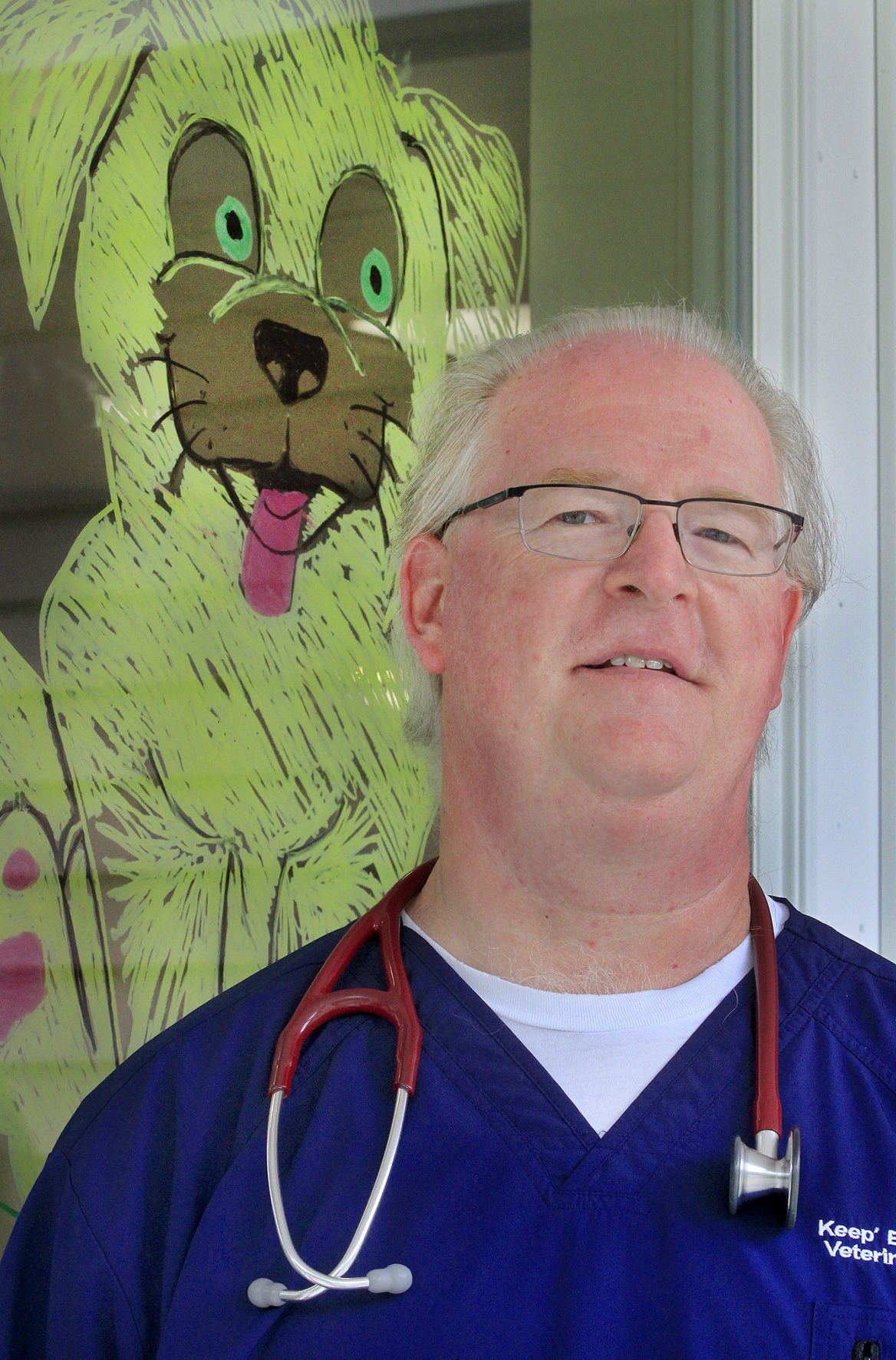 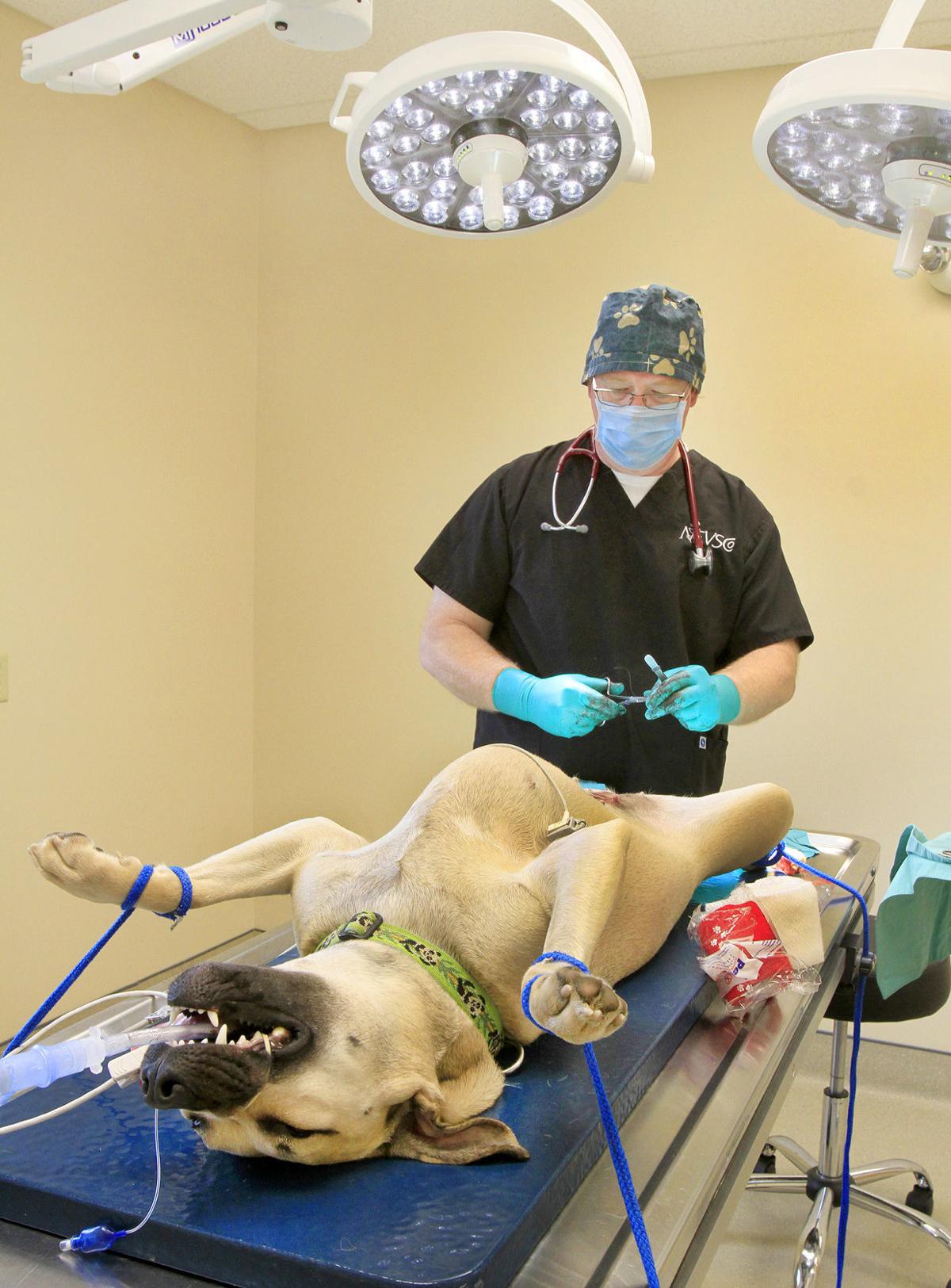 It’s past 6 on a summer evening, and veterinarian Andy Cooke is consulting with a woman in the parking lot of his practice in Troy, in the shadow of a majestic view of Mount Monadnock.

He’s giving her instructions about her pet, which he’s just examined inside his clinic; they’re outside because of restrictions imposed due to COVID-19. A member of his staff brings the dog out to her car, and it dances with joy, eagerly leaping into the back seat.

It’s the end of another workday for the 58-year-old Cooke, who opened his practice in 1998 and sees as many as 30 to 40 pets — almost all dogs and cats — a day. In addition to treating the animals, he instructs, teaches, calms and sometimes consoles their owners.

“Veterinary medicine is not all puppies and kittens; there are a lot of hard choices to make,” he says. “But I’m fortunate to do this. I love what I do. I’m never bored.”

Born in Rochester, N.Y., and raised in Ithaca, Cooke is the youngest of six children, three boys and three girls. Their father, William, was a car dealer, selling Cadillacs and Oldsmobiles.

Cooke came to love animals at a young age because his best friend Ted Fox’s father, Francis, was the head of the large-animal department at the Cornell University School of Veterinary Medicine in Ithaca. Francis Fox also had his own practice working with farm animals.

“We went on calls with his dad starting in about 3rd grade, and us boys would just play around like boys do. But by the 6th grade, I started to really watch him and thought that it was a great way to make a living.”

Dr. Fox turned out to be a significant influence and a mentor.

“My father died when I was 11 years old from colon cancer, and there’s no question that he filled a void in my life,” Cooke recalls.

“He was a strong, stout man with forearms like Popeye,” he continues. “He was a smart farm kid who went to ag school and then to vet school. He developed the vaccine that treated what’s called bovine viral diarrhea, and now every cow in the world receives it.”

Cooke says that at the end of each call, as Fox was driving away, the veterinarian would yell to the farmer: “Keep ’em healthy, now!” That’s the derivation of the name of Cooke’s practice on Route 12: “Keep ’em Healthy.”

He and Ted both developed a love of animals.

“We had every manner of animal, but kept them at Ted’s house. Waterfowl of all kinds, pigeons, goats, hawks, even a llama with one eye that had been abandoned by a traveling fair,” he says. “We were the kids that everyone knew would take in an animal.”

Ted Fox, incidentally, became an ornithologist and is now director of the Rosamond Gifford Zoo in Syracuse, N.Y. Dr. Francis Fox died at age 92 in 2015.

After high school, Cooke enrolled at Cornell, where he graduated with a degree in animal sciences. Next was Tufts University outside Boston, where he received his Doctor of Veterinary Medicine degree. He describes his tutelage under Fox as a tremendous help during his veterinary education.

His first job was at an equine practice in Saratoga Springs, N.Y., treating and breeding thoroughbred horses at the famed Saratoga Race Track, which opened in 1863 and is the third oldest in the country.

The work was fun and challenging, he says, but extremely hard, both physically and mentally.

“I worked 24/7, and one day I pulled out of a gas station with the pump handle still in my car, and I realized I was working too hard. Incidentally, there wasn’t an intact marriage in the group.”

Cooke was single at the time and had been at that practice for three years.

A colleague tipped him off to a job opportunity at Cheshire Animal Hospital in Keene, headed by Dr. Lee Pearson. He began there in 1993 and then opened his own practice, in Troy, in 1998. In 2017, he built a new 14,000-square-foot clinic next to his old building, and now employs a staff of 12.

Although he began as a “mixed” practice, treating both large animals on farms and also pets, he switched to a pets-only practice 10 years ago.

“As a single practitioner, I just couldn’t do both,” he says.

Cooke says veterinary medicine can be especially difficult for a very obvious reason — the patient cannot vocalize its problems. “We share that with pediatricians,” he notes.

“You use your eyes, nose, your hands, you look for the subtle signs. You look at the animal,” he says, explaining that it takes a significant amount of experience and intuition.

“You must meet them where they stand, and listen to them. They will tell you if they’re scared, or hurt, or mad. You have to know the signals. That’s what I’m good at, knowing people and knowing animals. Know what you know, and know what you’re good at, and bring energy to the situation.”

Treating animals also involves quite a bit of medical detective work, he says.

“I’ve been doing this for 31 years, and I still get stumped. You can’t take any case for granted.”

It’s also crucial to work with pet owners, he emphasizes, and listen carefully to what they’re saying about the animal.

“The human-animal bond is very strong; pets are members of the family,” he says. “Now that there is so much more isolation in society, we rely on animals to provide the closeness we need.”

As for how the role of pets has changed over the years, he describes the intimacy as having evolved “from the barn to the porch to the bedroom.”

Inevitably, though, in many cases, a pet must be euthanized.

“We take an oath to alleviate suffering,” he says. “There comes a time when you have to let them go; all the king’s horses and all the king’s men can’t do anything for them.”

Cooke is, naturally, a pet owner himself. He has two dogs: Kai, a Rhodesian ridgeback; and Bailey, a long-haired Jack Russell terrier. He also has Briar Rose, a domestic short-hair cat, and a rabbit named Mr. Fuzziwig.

When he’s not tending to veterinary medicine, which may take up to 70 hours a week, Cooke is an avid singer, a member of the Cheshiremen and Junction 135 barbershop quartets. He is also involved and performs with the Raylynmor Opera of Peterborough and Small Pond Productions in Marlborough. Cooke also sang in elementary and high school and was in the men’s a capella group at Cornell.

He met his wife, Pam, while both were performing in the Keene Lions Club presentation of “Guys and Dolls” in 1996. The two married in 1998 and have a daughter, Frances, who is a junior at the University of New Hampshire.

Music permeated the Cooke household in Ithaca. “We were a knockoff of the von Trapp family,” he quips. “We all sang.”

His mother, Mary, had trained as a singer and even had the opportunity to perform with Fred Waring & The Pennsylvanians, a famous band from the 1920s through the 1940s.

“Instead, she fell in love and had six children,” he says.

“College roommates fixed them up because they were both tall,” he says. His father graduated from Georgetown University and his mother from Trinity College in Washington, D.C.

Although he lost his father at a young age, Cooke remembers him well as “a great guy.”

“He lied about his age to get in the Navy in World War II,” he says, and served on a PT boat in the South Pacific.

“He never said much about the war,” Cooke says, but he recalls his father telling a story about a time he and his crewmates docked at a small island. While the rest of the men went into the jungle, his father stayed back with the boat to wash some laundry.

“Suddenly, a Japanese soldier appeared, and my father thought that would be the end of him.”

Instead, the soldier made a motion of two fingers to his lips, indicating he wanted a cigarette. “My father laid down his pack of cigarettes and lighter,” and the man picked them up and walked away.

With the early death of his father, Cooke’s oldest brother Will, only 21 at the time, took over management of his dad’s automobile dealership, the third generation of the family in the business. Their grandfather had also been a car dealer — selling Model Ts — in Rochester, N.Y.

“Some people asked me, ‘Why don’t you just go sell cars?’ ” Cooke said. “But I knew what I wanted to do — work with animals.”

At a glance: Andrew Cooke