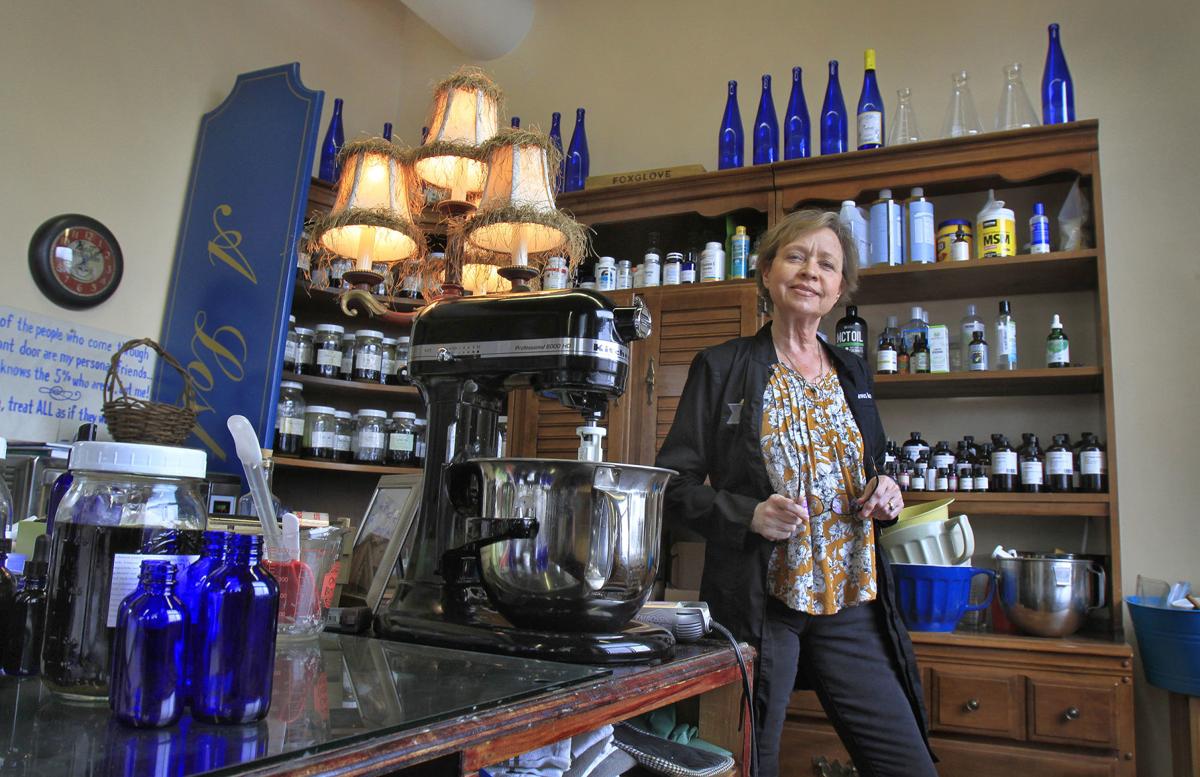 Rebecca Montrone is at home in the apothecary at her business Wondrous Roots Inc. in Keene, which offers holistic health products and consultation. 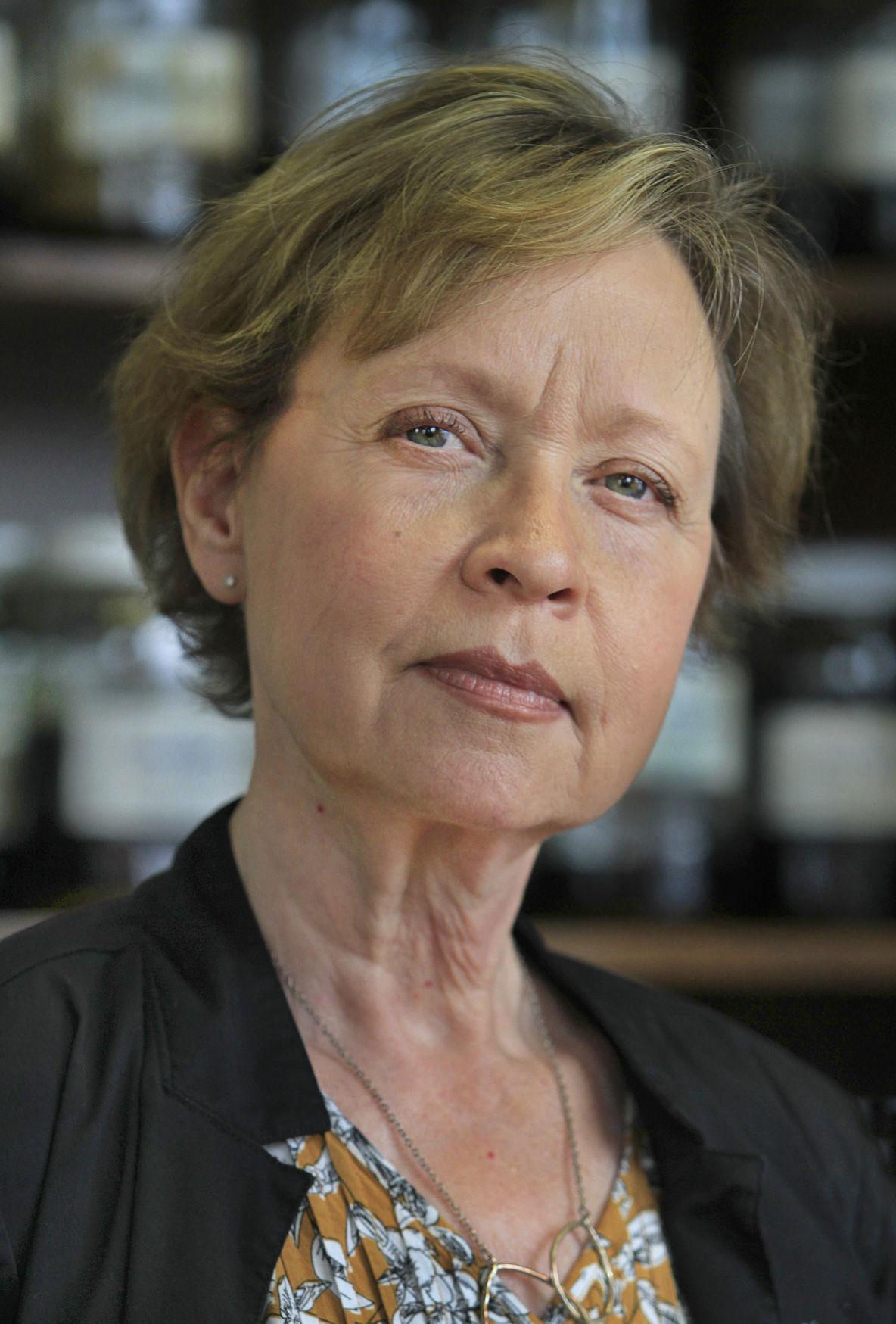 Rebecca Montrone is at home in the apothecary at her business Wondrous Roots Inc. in Keene, which offers holistic health products and consultation.

Rebecca Montrone — Becky to those who know her — finds it difficult to sit for long at her desk in the third-floor office of the Miller Forge Building on Roxbury Street.

That’s because she’s often jumping up to greet customers and clients who walk through the door. Her business, Wondrous Roots Inc. in Keene, offers holistic health products and consultation to a significant clientele — both regionally, and nationally through the web.

“I love to talk with people,” says the energetic 61-year-old Keene native who also hosts the radio talk show “Wondrous Roots: Your Health from the Ground Up,” which airs and streams live on Saturday mornings on WKBK AM/FM. The show is also a podcast.

Most of Montrone’s career has been devoted to addressing ailments with the vast panoply of ingredients found in nature, particularly plants. She bills herself as a holistic health practitioner, nutritionist and traditional apothecary herbalist.

Her interest in these subjects may have come from her lineage, for she is the granddaughter and daughter of two prominent Keene pharmacists who served patients in the area for generations. Elmer Roentsch, her grandfather, ran Medical Hall Pharmacy in Keene, and her father, George Roentsch, owned The Apothecary, which was located for almost five decades on Main Street. Both men had formidable reputations as “compounders,” a specialty involving the creation of a pharmaceutical product, using a variety of ingredients to fit a patient’s unique needs. George Roentsch opened The Apothecary in 1969, and worked there until he suffered a heart attack in 2009. He died in 2011, and the pharmacy eventually closed in 2018.

Montrone says her father was internationally recognized as an expert in compounding. He also was, she says, a significant influence in her life.

“My dad was a brilliant clinician, and many doctors in the area, if they were puzzled by something, would urge their patients to ‘see George’ for answers. He was smart and intuitive.”

He was a member of the International Association of Compounding Pharmacists, serving as its president from 1993 to 1995, and the N.H. Board of Pharmacy, serving as chairman for five years; and was named Pharmacist of the Year in 1995 by the Professional Compounding Centers of America.

A match made in the maternity ward

Montrone was born in Keene at the old Elliot Hospital on Main Street. Coincidentally, the man who would eventually become her husband, Dale Montrone, was born there only three days later. Their mothers shared the same birthday, and their families lived in the same neighborhood in West Keene.

She and Dale both attended Symonds School.

“He proposed to me in the second grade,” Montrone says. “We even drew up a document, but we later tore it up. He was the first boy I kissed when we played spin the bottle in the eighth grade.”

Both attended Keene High School, and dated throughout those years. But they broke up after graduation, he leaving to attend Syracuse University in New York, while she enrolled at the University of New Hampshire in Durham, where she stayed for one year.

She returned home to Keene because her mother, Rae Roentsch, was showing the initial signs of Alzheimer’s, at the age of 49. The disease was just starting to come to the fore for clinicians and researchers, Montrone says, and her mother’s case was very unusual due to its extremely early onset and galloping pace.

Her mother was taken to Mary Hitchcock Hospital, now part of Dartmouth-Hitchcock in Lebanon.

“She was so young, and she had [Alzheimer’s], and that fascinated the doctors,” Montrone says.

Throughout the ordeal of seeing her mother’s condition deteriorate, Montrone began to experience what she describes as a “spiritual awakening.” She enrolled in the Word of Life Bible Institute in Schroon Lake, N.Y., and graduated from its one-year program.

She came back to the Elm City to help her father at the pharmacy and to assist in her mother’s care. During that time, she and Dale began seeing each other again.

In 1981, they married at the Beth-El Bible Church in Surry, and the two moved to Maryland, where Dale was working with the National Security Agency on its research initiative into microchip technology.

A ‘fly on the wall to medical matters’

After a year there, the couple moved to Londonderry, when Dale started working with the Raytheon Corp. They then moved briefly to New Jersey, and returned to Londonderry. Her mother, then in the full throes of Alzheimer’s, lived with them there until she died in 1986.

After a brief stint in Fairfield, Conn., the couple moved back to Londonderry, where their daughter, Krista, was born in 1988. In 2005, they moved to Stoddard, where Montrone’s father, George, lived.

During this time, she was a stay-at-home mom, and she also took on a job as a medical transcriptionist.

“I was a fly on the wall to medical matters,” she says, and drawing on her family’s background, she realized there were some significant shortcomings in how illnesses were diagnosed and treated, and that mistakes were frequent.

This sparked an interest in holistic medicine and nutrition, and she enrolled in an online program at Clayton College of Natural Health, based in Birmingham, Ala., graduating with a bachelor’s degree in holistic nutrition. The college closed in 2010.

She formed her company in 2005 while living in Stoddard. She and Dale moved to Keene in 2009, and in 2012 set up shop at Wondrous Roots’ current location. The firm has seven employees, including her husband, who serves as its marketing director, expanding sales online.

Montrone describes holistic nutrition as a way for people to take more control of their health, offering alternatives to standard treatments for chronic illnesses.

“It is nutrients in the right forms and right amounts for the individual,” she explains, using the ingredients already found in nature.

Physicians are constrained by mandated “standards of care” regimens for illnesses set by the American Medical Association, accrediting agencies and insurance companies, Montrone says — and this doesn’t include most of the holistic treatments she considers effective.

“People are taking more responsibility for their own health,” she explains. “Science is always changing, and pharmacology is super complex today, but people don’t realize they now have so much more control over their health and lives,” and that there are alternatives to conventional medical treatments.

Montrone says one of her major roles is that of teacher. “I don’t like to foster dependency in my clients, but teach them to make better decisions, to take responsibility for themselves.”

And she emphasizes that many of today’s illnesses originate from eating the wrong things, food lacking the nutrients that can keep us healthy. “We see people aging prematurely,” she notes.

Despite the fact that her life’s work involves helping people live healthier and longer lives, Montrone readily admits we’ll all face death. But she says that’s something she’s prepared for, guided by the spiritual journey she began as a young woman.

“My faith is very important to me. Jesus Christ is the only thing that matters in life; we’re all here to be instruments of God,” she says. “I’m eternally minded. I like to say ‘Beam me aboard, Scotty’ when it’s my time.”

At a glance: Rebecca Montrone