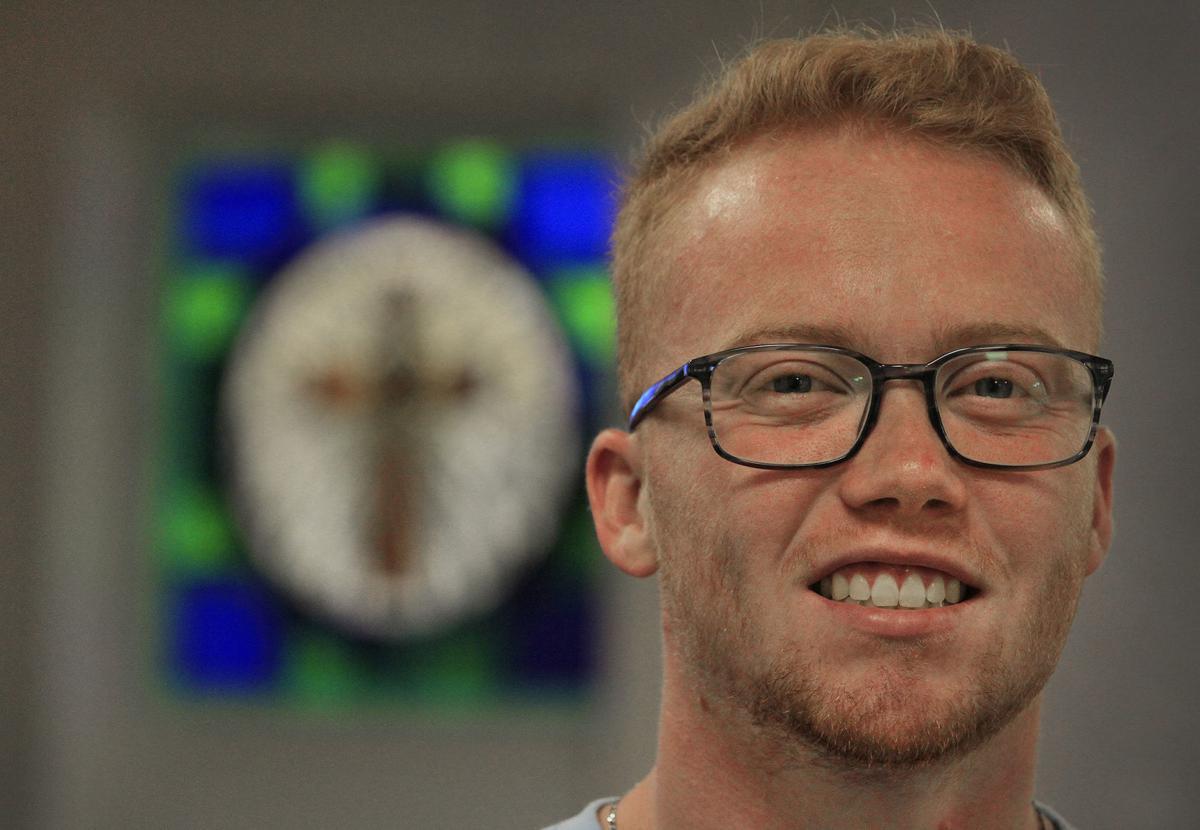 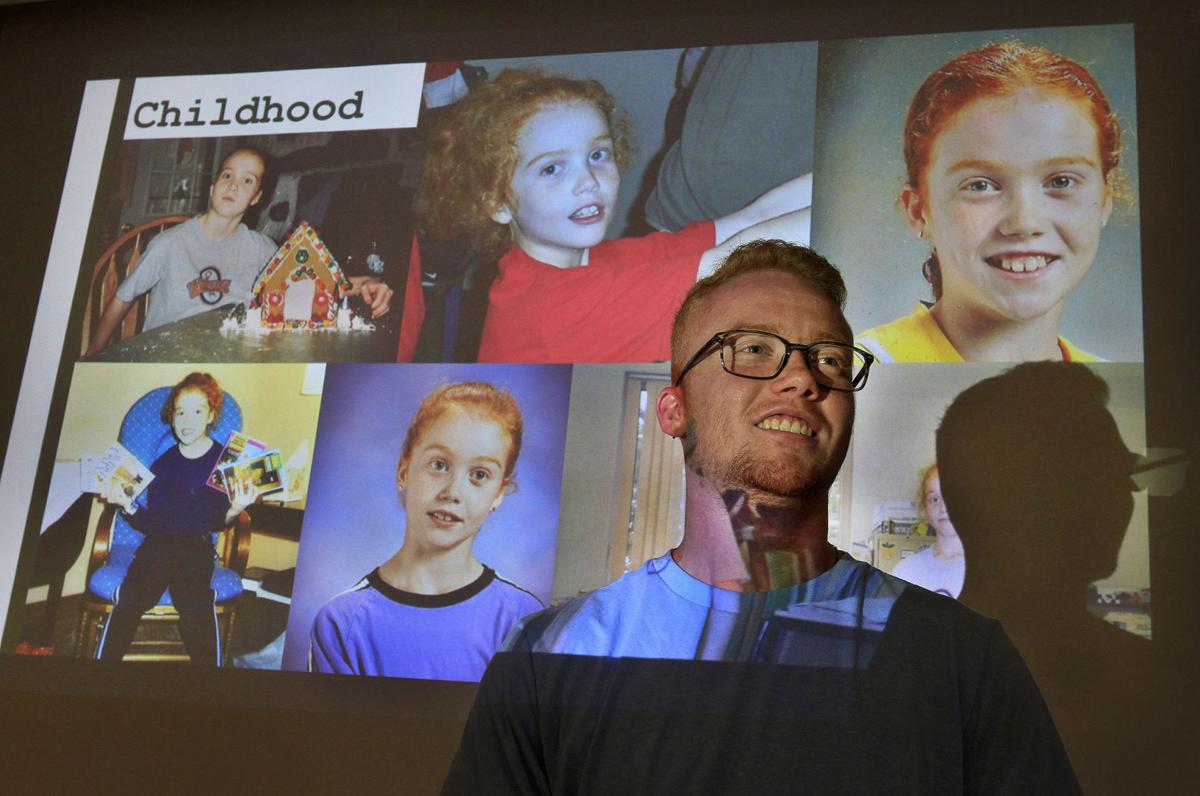 Liam Magan stands before a projection of childhood photos taken before he transitioned. The images were part of his presentation at the United Church of Christ in Keene Thursday night. 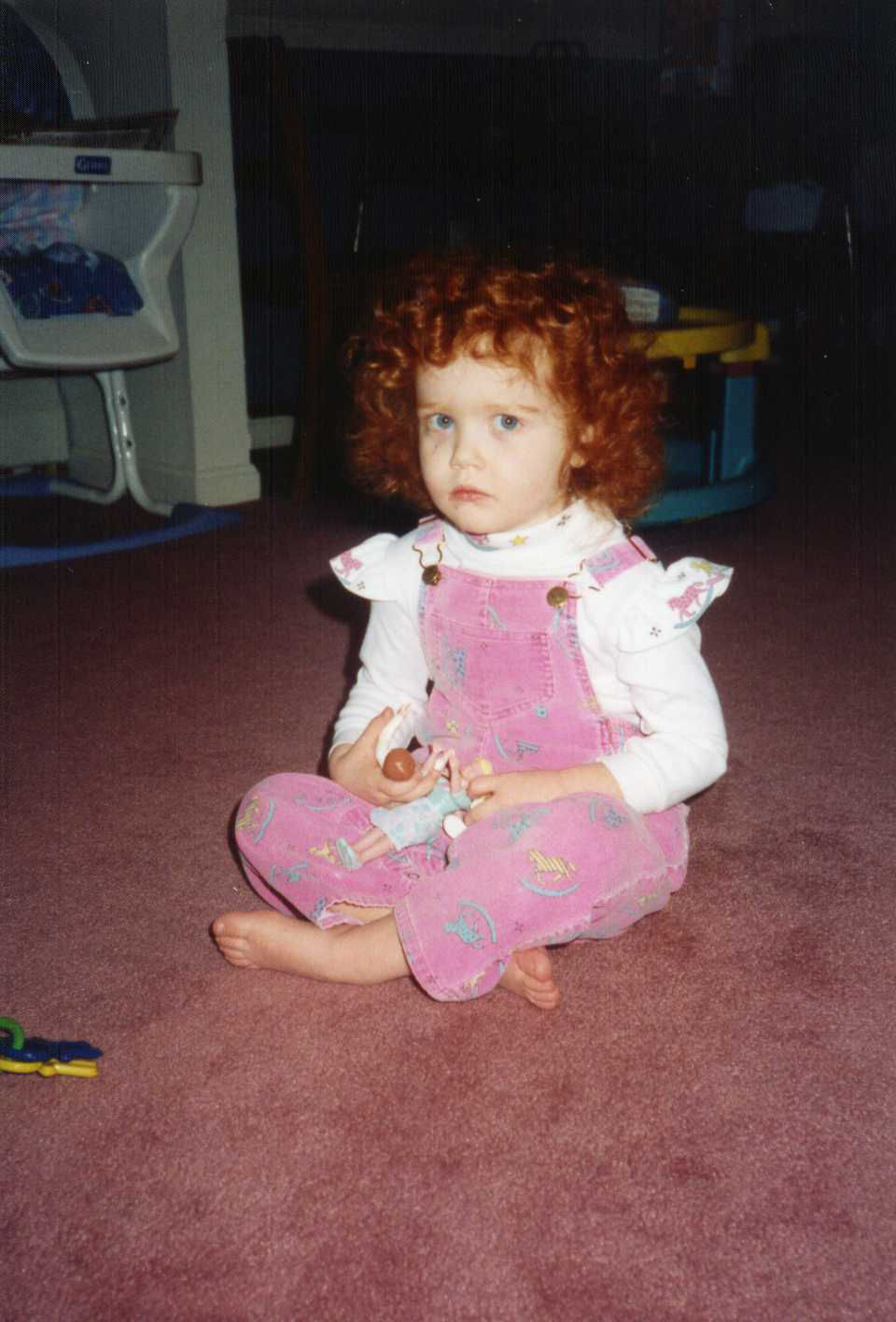 Liam Magan is shown here at age 4 in his early childhood home in Penacook. Magan, who was known as Kayla in childhood, came out as trans in college. 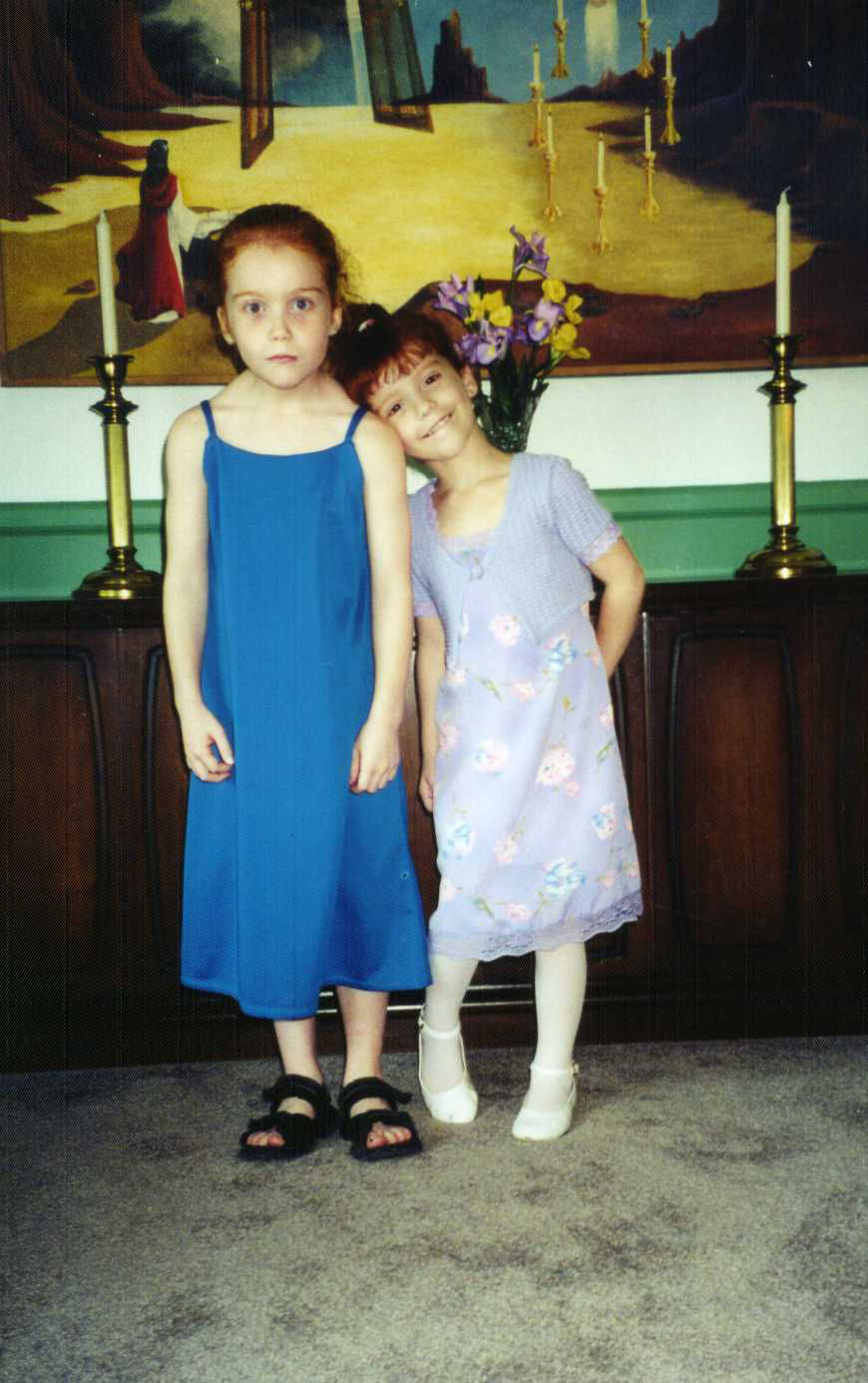 Liam Magan, left, at around age 6, poses for a photo with his younger sister, Lauren, in Newark, Del. Magan came out as trans in college.

Liam Magan stands before a projection of childhood photos taken before he transitioned. The images were part of his presentation at the United Church of Christ in Keene Thursday night.

Liam Magan is shown here at age 4 in his early childhood home in Penacook. Magan, who was known as Kayla in childhood, came out as trans in college.

Liam Magan, left, at around age 6, poses for a photo with his younger sister, Lauren, in Newark, Del. Magan came out as trans in college.

The road to Liam Magan’s identity is lit by a constellation of moments. The 25-year-old knows these anniversaries by heart. One by one, he rattles them off.

Jan. 17, 2016: Had his head shaved on a whim. From a bathroom mirror at a Keene State College dorm, he saw, for the first time, a man’s face peering back at him.

Nov. 6, 2017: The day he had his top surgery, a procedure to flatten and reshape his breasts.

Despite having had a woman’s body for much of his life, Magan said he was always a man. But his name wasn’t always Liam.

‘My body didn’t match up’

His parents named him Kayla. And long before he knew the word “transgender,” Magan recalled, he had a vague but strong feeling something was wrong. It started when he was very young — four or five.

Even now, he struggles to explain the feeling. But when he tries, one word comes to mind: chaos.

“It’s like a constant unsettling (feeling); you just don’t feel calm,” he said. “You don’t feel right in your skin.”

The chaos manifested itself in different ways as Magan was growing up. He felt uncomfortable in dresses. He hated his long hair. It was always tied back.

“Every time I played games with friends, I was always the husband or the brother,” Magan said of his childhood in Epsom. “I know all kids kind of bend gender, but for me, it was like, I liked it. Because people were calling me ‘he’ or a boy. I just knew I liked it.”

Most of all, he said, he was deeply unhappy.

Once, in eighth grade, he cut his hair really short, and someone at his parents’ church referred to him with male pronouns. He loved the feeling, but couldn’t articulate why. His sadness only deepened as puberty struck. While girls around him were excited about wearing makeup and bras, Magan tried to ignore his rounding hips and growing breasts. He preferred men’s clothes.

There’s a medical term to describe this feeling. Doctors call it gender dysphoria, a mismatch between a person’s physical gender and the gender they identify as.

“It’s not that you’re becoming someone new or changing your gender; you’re just being who you are, you know,” Magan, of Keene, explained. “You’re born that way. It’s (as though) you’re born without a finger or an extra finger, (and) you have a surgery to correct that. It’s the same kind of thing in my mind. Some hormonal thing happened in the womb, and my body didn’t develop right. My head is male, and my body didn’t match up.”

By the time he got to Keene State in 2012, Magan was searching for a reason for his unhappiness. It wasn’t until his senior year that he began making sense of his experiences. He majored in Holocaust and genocide studies, and in 2015, spent a semester in Poland. Perhaps it was the change of scenery or a different social circle that allowed him to articulate the thing that he’d been struggling with. But whatever it was brought him to YouTube, and to the question: How do you know if you’re transgender?

He watched many videos on the topic during that time, but whenever Magan thought about it, fear gnawed at him. If he were trans, how would he tell his conservative family members? What would his friends think?

Back in Keene, he felt a growing sense of despair.

“When I was thinking about what I wanted to do after school, I just saw nothing,” he said. “I couldn’t even think about getting married, having a job or living anywhere — blank. I couldn’t even imagine a life after school and my life as a woman.”

It was around that time that he decided to shave his head. And there, looking at himself in the mirror, was the answer he’d been searching for. Suddenly, the experiences of his childhood made sense: why he hated his long hair, how he tried to hide from puberty.

‘What would my name be?’

Magan stood at the front of the United Church of Christ’s first-floor chapel in Keene Thursday. Flanked by two stained-glass crosses on either wall, he talked to an audience of people about his childhood. On the screen above him was a slideshow of family photos. There he was, a baby in a pink onesie, on a carpeted floor next to his parents.

“I was their precious little girl,” he said, tilting his head toward the photo. “And all their expectations for me were set in stone.”

Over the past year, Magan has given similar talks at churches in New Hampshire, Connecticut and Pennsylvania. But the Keene talk was different. Among the 25 or so people who’d gathered at the church were some of his friends.

One of them was Lindsay Byrne, who has known Magan since high school. She even helped him pick his new name.

Byrne, 23, said Magan texted her and other friends one day with a request: “If I was a boy, what would my name be?”

“I just knew it would be Liam,” she recalled. “I just sent that without even thinking.”

The name fit, she said, and having helped him in that way is special.

Back at the church, Magan told the story. The name resonated with him immediately.

He has used this and other anecdotes to educate people about transgender issues. And churches aren’t the only venue he’s using for his advocacy. Last year, he testified at the N.H. Statehouse on House Bill 1319, a bill Gov. Chris Sununu signed into law last June that prohibits discrimination based on gender identity. Magan, who now works as a septic system evaluator locally, says he was discriminated against at a former workplace and that the bill’s passage was a step in the right direction.

But when he’s talking in churches about his experiences, he’s also hoping to reach teens who are experiencing similar turmoil. It’s something he hopes to do more of.

“If one person hears my talk and says, ‘Wow, that’s me’ or even if I inspire someone to be more authentic in a different way,” he said, “... that’s kind of what I really want.”

This article has been altered to correct the date of Liam Magan's surgery.

At a Glance: Liam Magan

Advocating for the transgender community