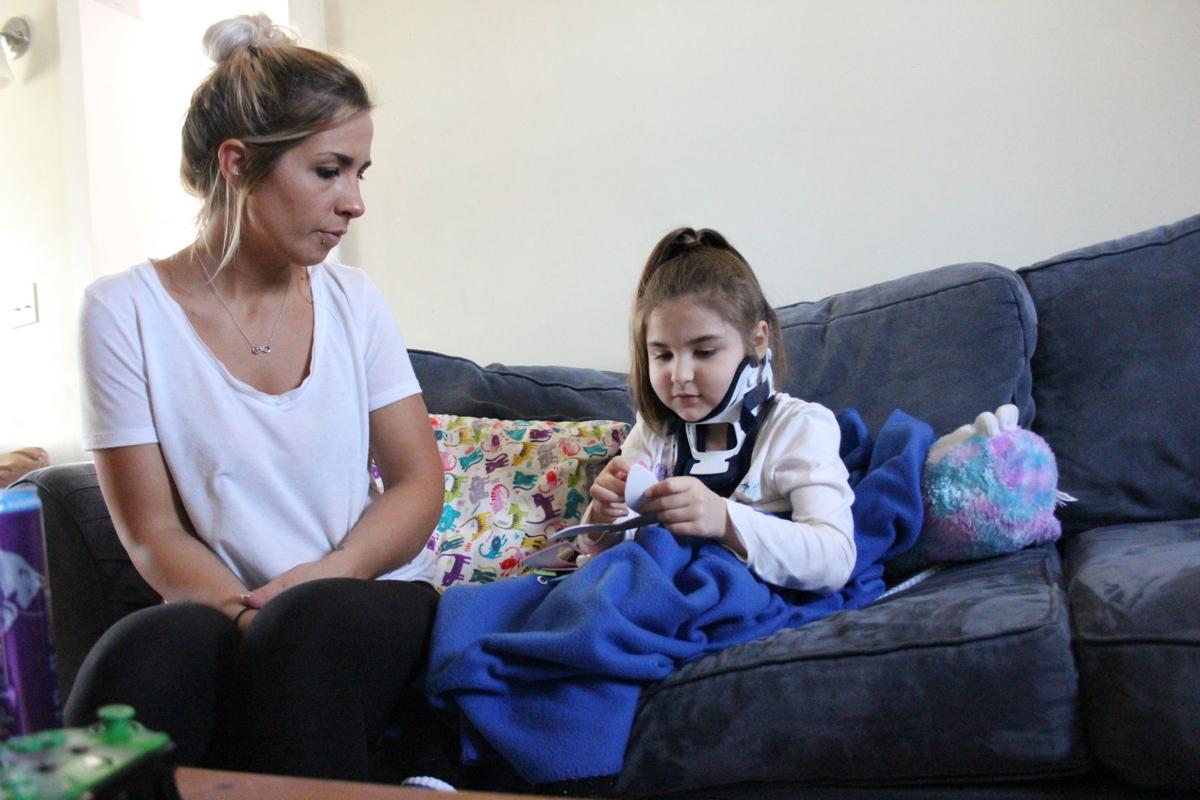 Bella Melendy and her mother, Crystal, at their Keene home Monday afternoon. Bella, 6, suffered a traumatic brain injury in a sledding accident last month in Marlborough. 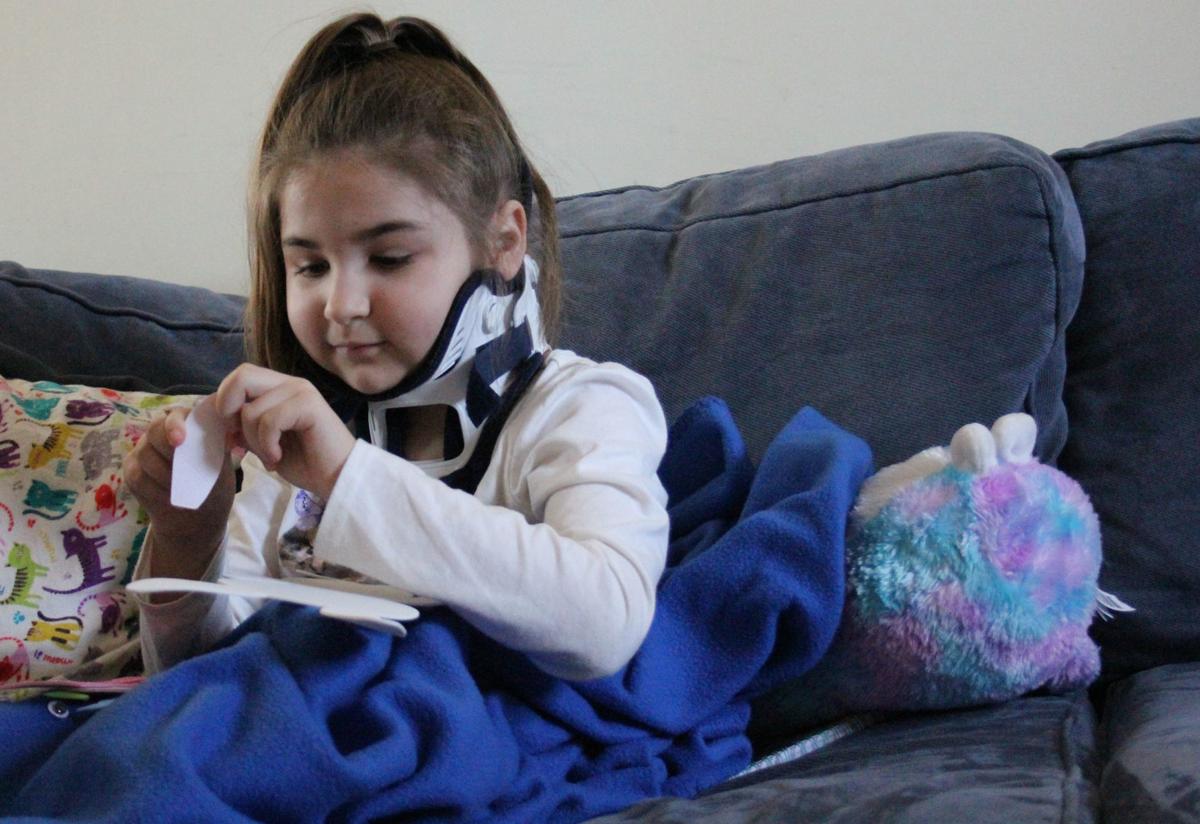 Bella Melendy, 6, puts together a foam cutout of the Easter bunny at her home in Keene Monday afternoon. Bella was badly injured in a sledding accident in Marlborough last month. 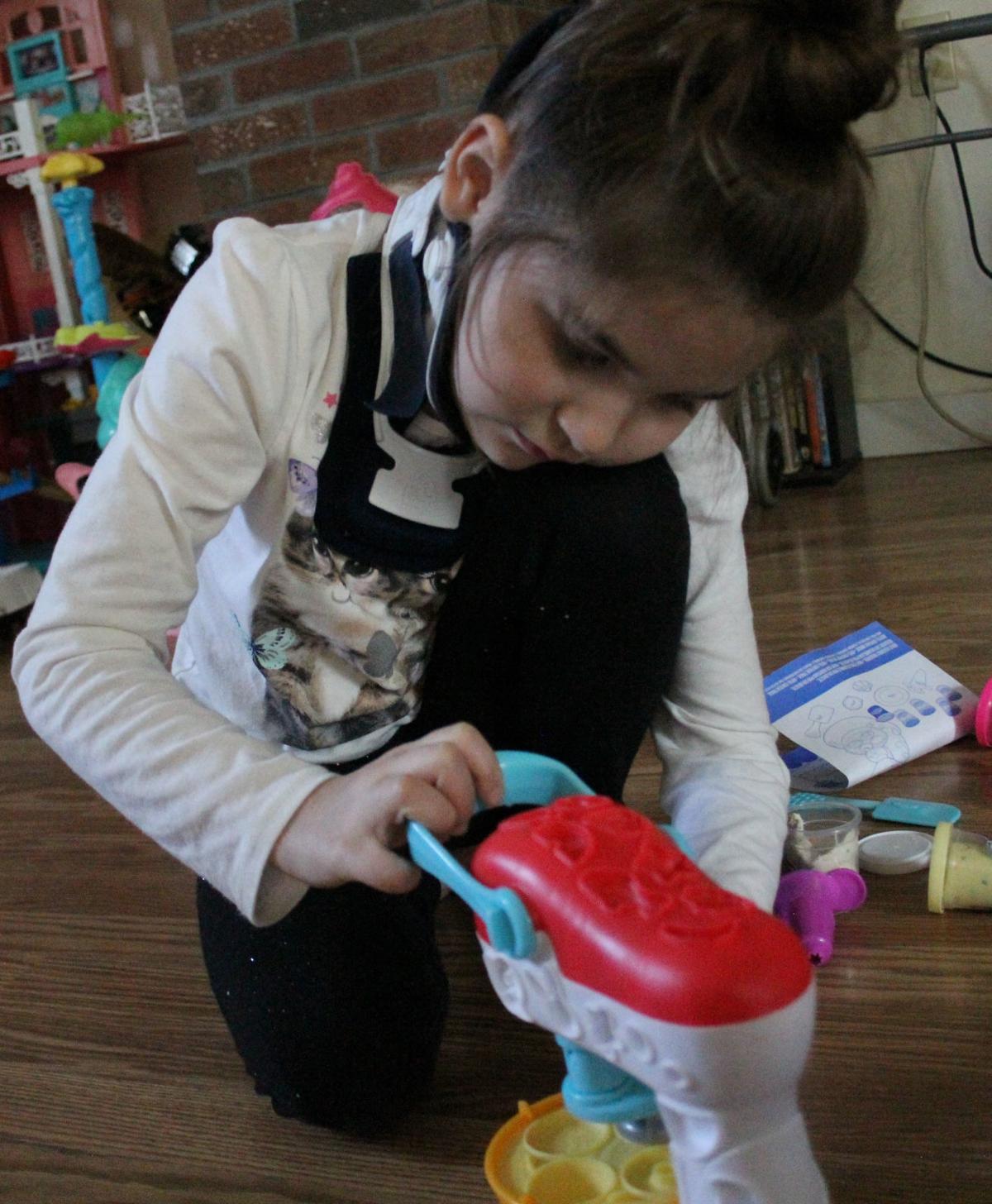 Bella Melendy, 6, pretends to own a bakery on Monday afternoon at her home in Keene.

Bella Melendy and her mother, Crystal, at their Keene home Monday afternoon. Bella, 6, suffered a traumatic brain injury in a sledding accident last month in Marlborough.

Bella Melendy, 6, puts together a foam cutout of the Easter bunny at her home in Keene Monday afternoon. Bella was badly injured in a sledding accident in Marlborough last month.

Bella Melendy, 6, pretends to own a bakery on Monday afternoon at her home in Keene.

From the sign on the door to the minuscule walker in the living room, traces of Bella’s accident are everywhere.

“Due to Bella’s injuries, she CAN NOT get sick. Please wash hands when you come in!!!” the yellow paper announces.

But for the moment, 6-year-old Bella Melendy sees neither. She is slumped against a fluffy pillow, watching “The Boss Baby” on a large-screen TV. Every part of her appears to have melded into the plush couch, save for the blue and white brace, an imposing plastic contraption that keeps her neck straight.

It’s been more than a month since the Franklin School 1st-grader fractured her skull in a sledding accident in a field on Horse Hill Road in Marlborough.

Though her injured shoulder has healed, Bella is facing what doctors have said will be a long and uneven recovery. She gets confused sometimes and has headaches. She’s sensitive to light and has mood swings, all symptoms of traumatic brain injury.

The afternoon of Feb. 17 began with Bella hopping onto a sled faster than her mother could stop her. It ended with her being airlifted to Dartmouth-Hitchcock Medical Center in Lebanon, according to her mom, Crystal Melendy.

Bella’s sled disappeared behind a hill that day, Melendy said. Her brother, Damien Malcolm, 9, discovered his sister unconscious at the tree line.

In addition to multiple hairline fractures in her skull, a small part of Bella’s head caved in from the impact. She suffered a small brain bleed, ligament damage in her shoulder and pulled ligaments in her neck. She spent three days in the hospital before being released home, only to return the following week after she began experiencing pain in her right ear and blurry vision in her right eye, her mom said. Doctors worried the accident may have damaged her hearing, Melendy added.

Doctors diagnosed Bella with traumatic brain injury, a catch-all phrase that describes a condition with symptoms that can range from blurry vision to headaches to short-term memory loss and confusion.

“I’ve been calling her Dory,” Melendy says, referring to the forgetful fish in the Pixar movie “Finding Nemo.”

Back at the family’s Keene home, the knit beanie Bella wore on the day of her accident is on the coffee table. The snow boots and gloves are on the floor.

“The doctors, they said with the damage she had, she had no lacerations on her head,” Melendy says. “This hat is what stopped her from cutting her head. Just this hat.”

Bella doesn’t remember the accident, her mom says, and it’s hard to know if she remembers her hospital stays — the first or the second.

Her brother, who on Monday afternoon is sprawled on a smaller couch, does. He asks that the word “accident” not be used around him. He’s had a hard time, Melendy says. She’s taken him to counseling.

Later, the TV is off, and Bella churns through activities. She looks through a cat-themed coloring book for a spell before examining some stickers and stamps. Next comes the Play-Doh. Bella is pretending to own a bakery. She’s taking orders for hot-dog-flavored cupcakes. She darts from one room to the next, and her mom follows her.

“Walking feet,” she reminds her daughter for the second time in 10 minutes.

Doctors told Melendy the recovery will be gradual, and there’s no exact timeline yet. However, they’ve already determined Bella’s hearing is fine.

But her behavior isn’t typical of her, her mom says. Before the accident, Bella would get absorbed in crafts for 45 minutes at a time. Now, she can’t seem to focus long enough.

“I understand right now I don’t have the full Bella, like the old Bella, completely back,” Melendy says.

There are times Bella is confused. She tells her mom about a sticker she cut out of a page, but stops abruptly. She forgot the word “paper.”

“When is Christmas over?” she asks her mom later.

Bella has also made tremendous improvements. She can breathe on her own. She no longer wears a shoulder brace. She can walk for longer, and her balance is better. She even visited her friends at school last week.

But even the short visit overwhelmed her. Melendy said school staff suggested Bella continue to stay home for now. It’ll be another two months before the neck brace comes off, and her skull fractures are still too delicate.

A tutor from the school will work with Bella at home in the meantime, her mom says, and she’ll likely return in the fall.

In good moments, she shares photos of her daughter smiling. Sometimes, she posts about the Bella she used to have — a little girl who loved to cheer, who burst into sporadic dance and who had the seasons and holidays down pat.

The Bella she has is making slow progress. Her symptoms shift and morph as the day goes on.

“Outwardly, she appears fine,” her mom says. “But there’s a lot of damage.”