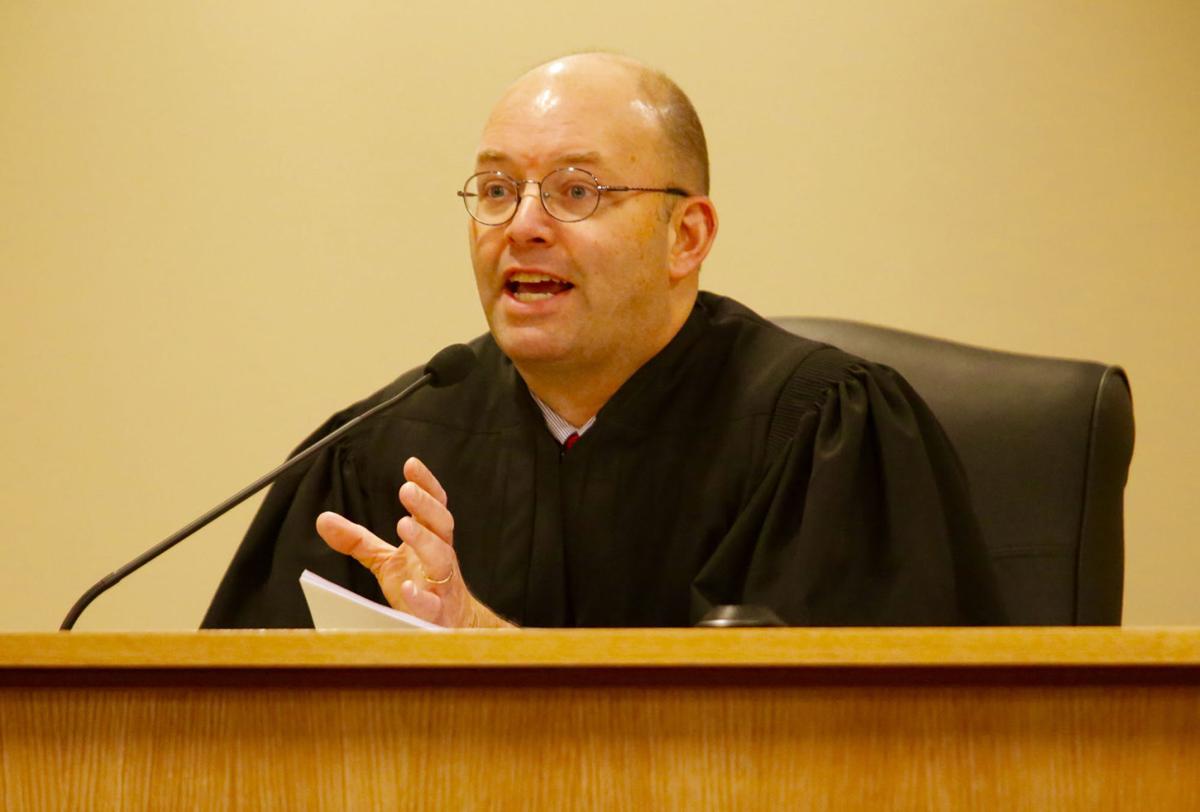 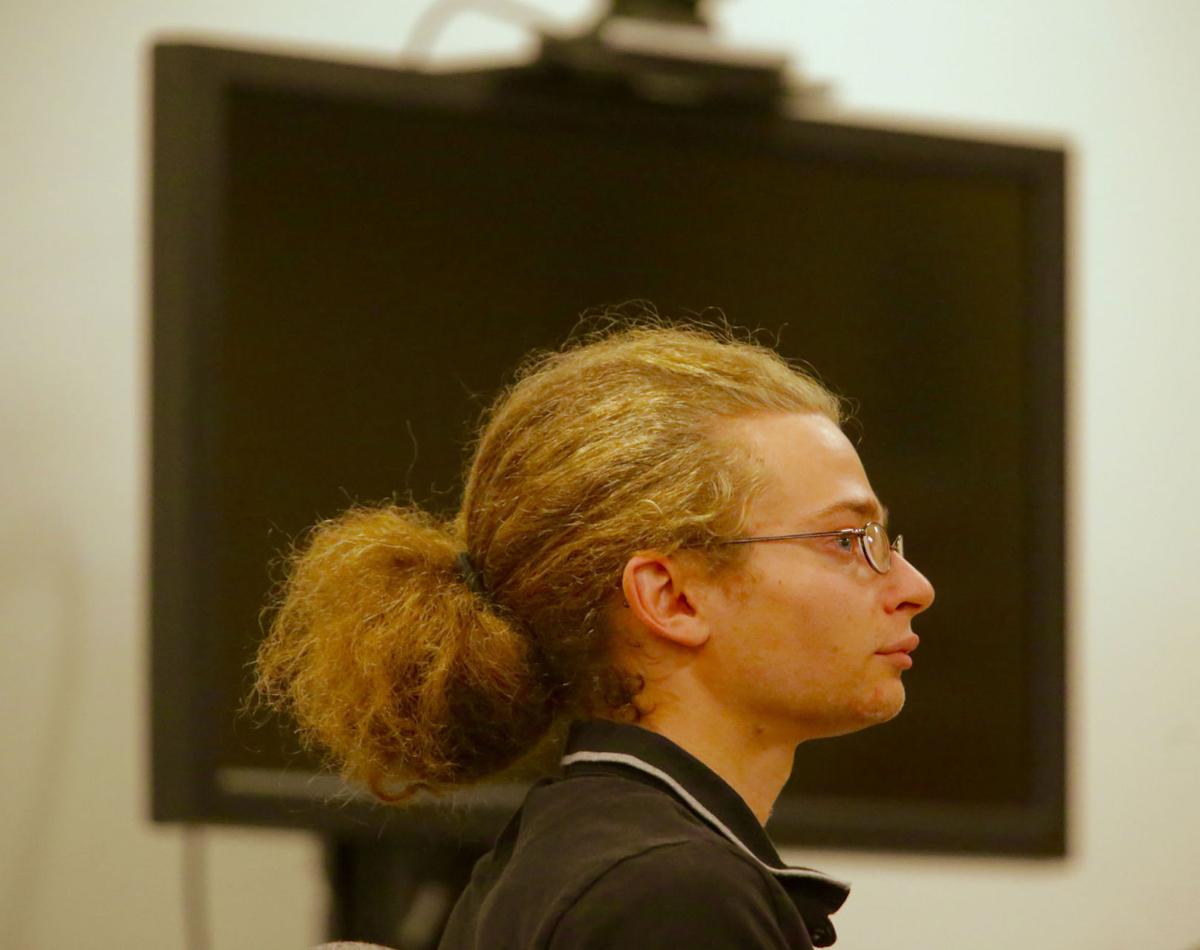 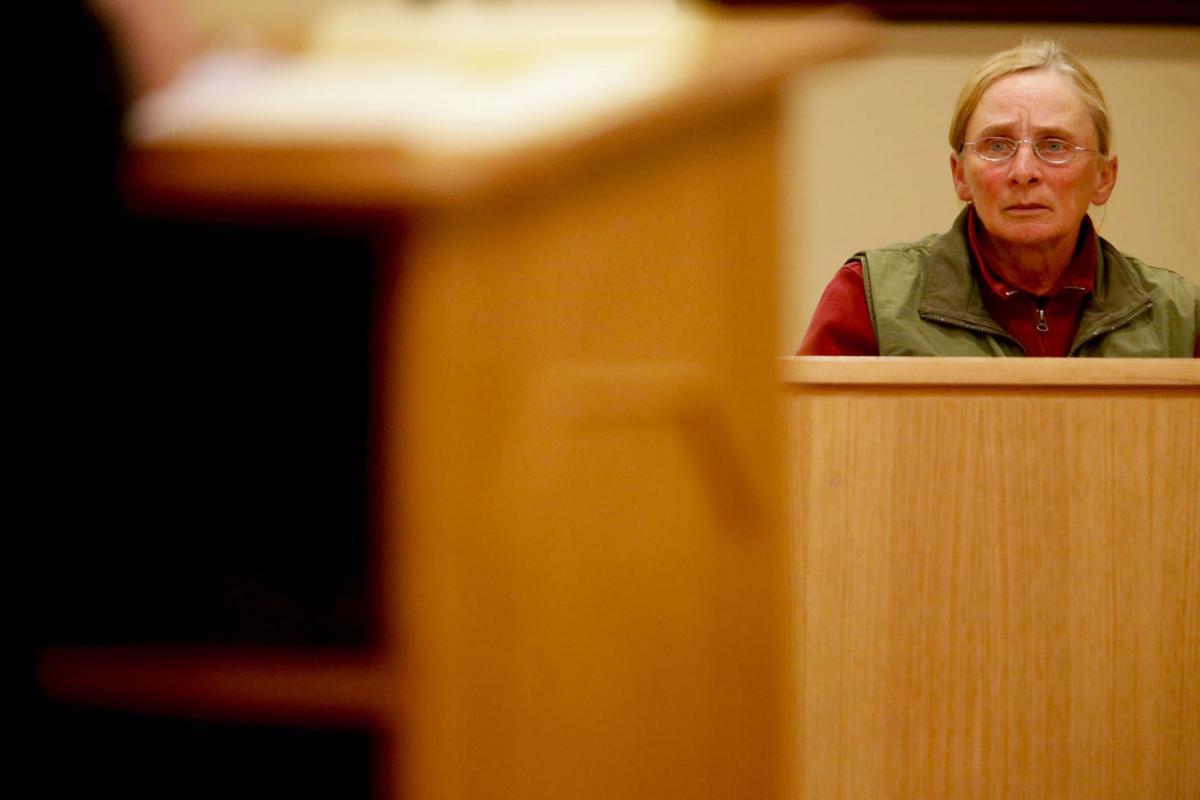 Keene parking enforcement officer Linda A. Desruisseaux sits on the witness stand taking a question from Robert J. Dietel, a lawyer for the city. 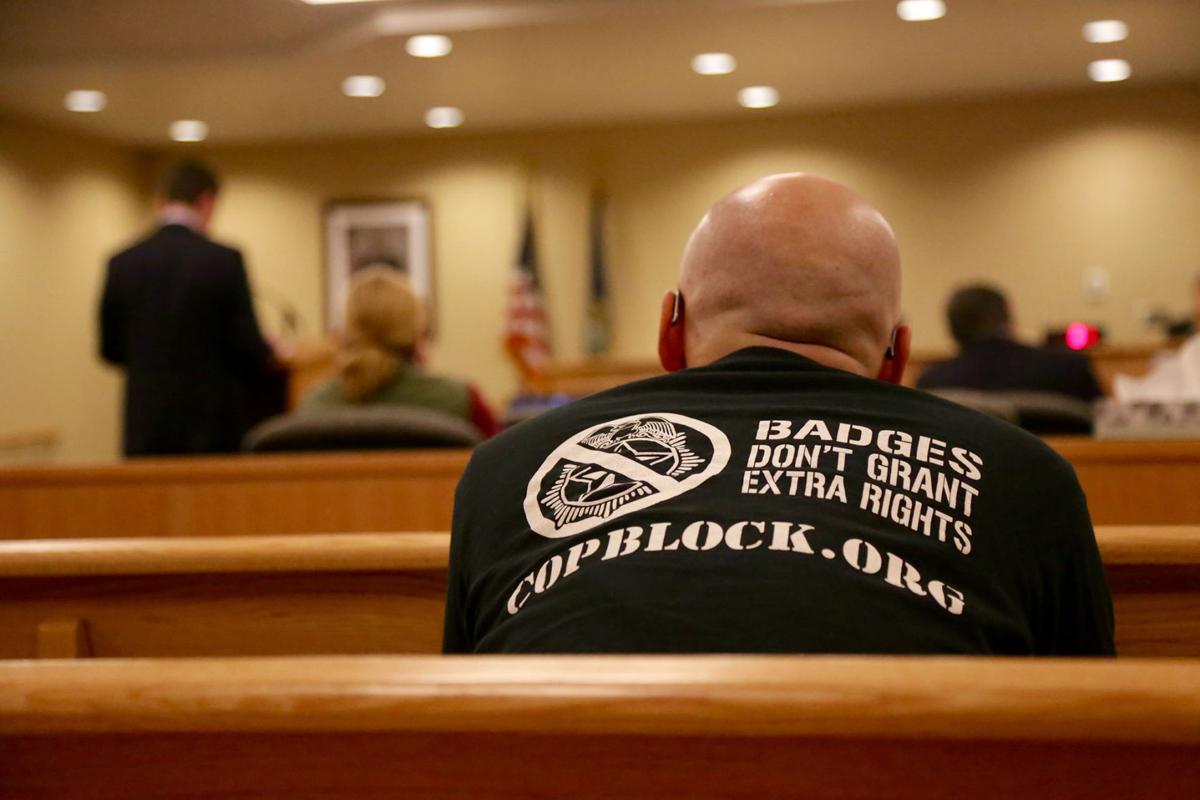 J.P. Freeman listens to the proceedings. 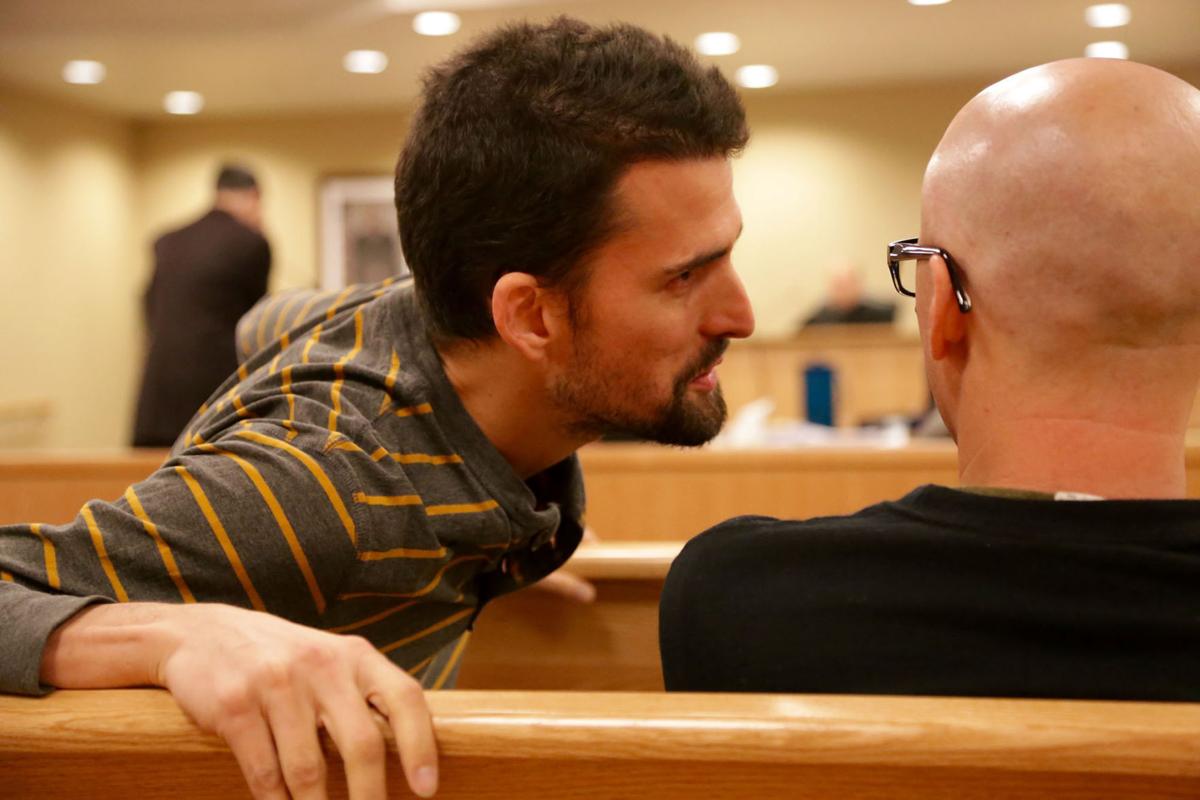 Ian Freeman, one of six defendants in a City of Keene lawsuit, talks with J.P. Freeman during a hearing in Cheshire County Superior Court Friday.

Keene parking enforcement officer Linda A. Desruisseaux sits on the witness stand taking a question from Robert J. Dietel, a lawyer for the city.

J.P. Freeman listens to the proceedings.

Ian Freeman, one of six defendants in a City of Keene lawsuit, talks with J.P. Freeman during a hearing in Cheshire County Superior Court Friday.

City officials were back in court Friday to continue their years-long fight for a buffer zone — now of 10 feet — between activists known as “Robin Hooders” and Keene’s parking enforcement officers.

The city claims the Robin Hooders follow the officers and harass them while they’re trying to do their jobs.

The nearly day-long evidentiary hearing in Cheshire County Superior Court included testimony from parking officers Linda Desruisseaux and Jane McDermott. They said they feel intimidated and unsafe, and believe a buffer would help mitigate — although not solve — the issue.

“I’m being harassed, bullied and stalked on a daily basis while I’m at work,” McDermott said.

She also noted that she’s received counseling to cope with the long-term stresses of her job.

Similarly, Desruisseaux, who’s held her position for 15 years, spoke of what she called a feeling of “deep dread” to see the Robin Hooders on the streets of Keene.

She told the Robin Hooders’ attorney, Jon Meyer of Manchester, that it doesn’t matter what the activists say to her; she finds any interaction with them intimidating, given their history.

Judge John C. Kissinger Jr., who will either grant or deny the city’s request, also heard from Robin Hooders Ian Freeman and Garret Ean. Freeman testified that he’s Robin Hooded less than a handful of times since October 2013, while Ean said he continues to do so three to four days a week.

On Friday, Ean and Freeman said they have never entered anyone’s personal space while Robin Hooding, nor would they want to. They testified that they’re trying to fill expired meters to help save people from getting tickets, and that if their efforts result in fewer officers monitoring the streets, all the better.

Meyer asked Freeman how a court order prohibiting the defendants from being within 10 feet of the parking officers at any time would affect their ability to Robin Hood.

“It would basically kill the ability to Robin Hood,” Freeman replied.

He explained that he must get ahead of the officer, fill an expired meter and leave a Robin Hooding calling card on a car windshield while that officer walks toward him gaining ground. That makes it nearly impossible to maintain a 10-foot buffer or more at all times, he said.

Moreover, Freeman asked what he’s supposed to do if he’s sitting outside at a city restaurant and unintentionally crosses paths with a parking officer.

“I’d be super paranoid,” he said. “I’d always have to wonder if I was going to come within that radius. And, could I sit out and enjoy a summer day at a restaurant without worrying about jumping out of my chair and into the street to avoid a contempt of court charge?”

Freeman and Ean are two of the six defendants named in a civil lawsuit the city of Keene filed in 2013 against the Robin Hooders. The four other defendants are Graham Colson, James Cleaveland, Kate Ager and Peter Eyre, who that year were all also affiliated with a local group of libertarian activists and the blog Free Keene.

But both parking enforcement officers said there was little to no interaction with those four in the past two years.

The city’s original suit claimed the six defendants verbally harassed officers, encouraged them to find new jobs, followed them closely in a distracting manner and created safety concerns for drivers and the officers.

Later, the city added a motion to the case asking for financial reimbursement because the officers weren’t able to perform their jobs properly; for counseling; and for costs because one of the officers quit and had to be replaced.

When Keene officials first took action against the Robin Hooders, they sought an injunction to keep the activists 50 feet away from the parking officers. That number later changed to 30 feet, then 15 and, as of Friday, the city’s request was down to 10.

Two years ago, Kissinger denied the city’s request for an injunction. And, at that same time he dismissed the civil lawsuit against the Robin Hooders, citing First Amendment rights.

The city responded by appealing Kissinger’s decision to the N.H. Supreme Court, whose justices ruled this past June that he was correct in deciding that the six activists’ protests of Keene parking enforcement officers is protected as free speech.

The higher court, however, said Kissinger should issue or deny the city’s request for an injunction based on the specific merits of the case, and not free speech claims alone. As a result, the case was sent back to the lower court for further consideration.

Attorneys don’t expect any further testimony in the case. Instead, they will submit their memorandums of law to the court in the next couple of weeks. A hearing is tentatively scheduled for Oct. 19, should Kissinger decide to hear oral arguments before handing down his decision.