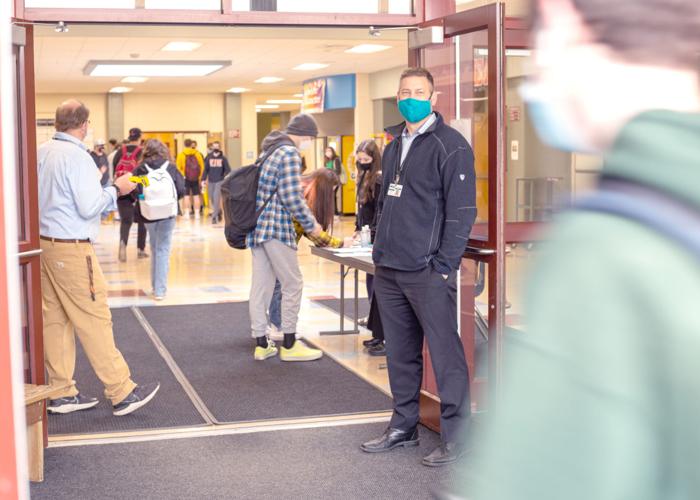 Keene High School staff welcomes students, checking their temperatures and signing them in, on the first day back to in-person classes with the full student body on May 3, 2021. 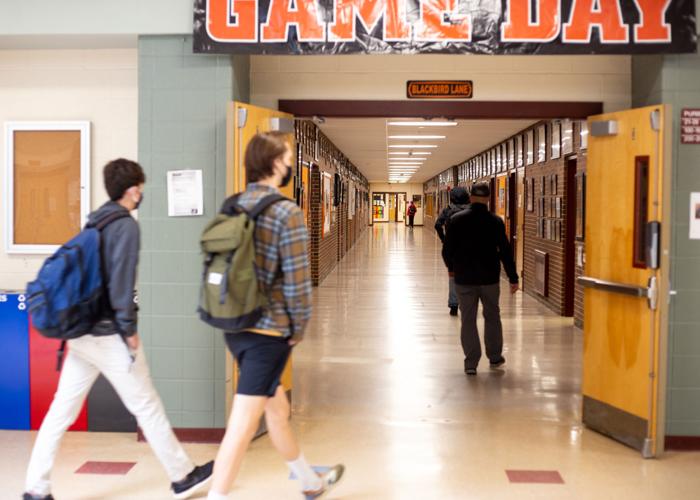 Keene High School students return on the first day back to in-person classes with the full student body post-stay-at-home order, May 3, 2021.

Keene High School staff welcomes students, checking their temperatures and signing them in, on the first day back to in-person classes with the full student body on May 3, 2021.

Keene High School students return on the first day back to in-person classes with the full student body post-stay-at-home order, May 3, 2021.

School districts have a significant challenge on their hands as they work to help students catch up after two years of pandemic-related education disruptions.

This is evident at Keene High School, where only one-third of students are proficient in math, nearly half were recorded as habitually truant last year, and school officials have dealt with multiple incidents of fighting, vandalism and disrespectfulness.

“Some kids are able to learn more independently and maintain some level of previous skill acquisition but in general we’re going to see a level of regression and we’re going to identify gaps because of the pandemic,” Campbell said.

“For some kids, math is not very literal, you know, they need explanation, they need practice before the ‘aha’ moment happens.”

At Keene Middle School, 19 percent of the students were proficient in math last year, compared to 42 percent two years earlier.

The N.H. Department of Education doesn’t have year-to-date attendance figures for the current school year. Keene High had a 90.3 percent attendance rate last school year, down three percentage points from two years before. (The rate is derived from information districts provide at the end of the school year on number of days of attendance and absence for their students).

But what went way up for Keene High and some other schools across the state last year was the number of students who were habitually truant, which is defined as having an unexcused absence of at least half a day on 10 or more occasions.

At Keene High, the report shows 639 students were habitually truant last year, or 47 percent. Sixteen students fell into this category in the 2019-20 school year, or 1 percent.

Bill Gillard, a math teacher at the high school and the president of the Keene Education Association, said Friday the numbers track with what he saw personally.

“I saw a significant increase of truancy,” he said. “There were students on the roster to begin the semester who never came to school. That was few and far between before COVID. A lot of kids lost a taste for being in any type of learning environment.”

Campbell, the assistant superintendent, said attendance was taken during remote instruction by students logging in to online classrooms.

He questioned whether some of the unexcused absences arose from students logging in late and said other districts may have had different methods for taking online attendance.

Several other high schools in New Hampshire also reported high numbers of habitually truant students last year, including 667 out of 1,363 students at Manchester Memorial High School and 1,076 out of 1,831 students at Nashua High School South.

Conant High School in Jaffrey had 114 habitually truant students out of its 371 pupils, while Hinsdale High, with an enrollment of 137, had two.

Some students lacked motivation before the pandemic, and this problem grew by the time they returned for full-time, in-person instruction, Campbell said.

“Some kids really have had a struggle transitioning back after nearly two years away from the academic setting,” he said.

“It has led to some behavioral concerns for those kids who aren’t making either social nor academic progress. Other kids are doing very well, either closing the gap or regaining themselves academically.”

Instances of students acting out, being disrespectful of teachers and fighting with other students seem to have increased at the high school this year, said Campbell, who was hired as assistant superintendent in 2019.

Behavioral problems at the high school, including vandalism, have prompted concerns that were discussed in a Keene Board of Education meeting in December as well as at a school board candidates’ forum last month.

On Friday, classrooms were temporarily locked and police were called to what a sergeant described as a “minor” fight on campus (see related story).

Meanwhile, efforts are being made to identify students who need to make up ground academically. There is a consensus in education that a return to in-person instruction is a benefit in itself.

He said testing was being done in grades 6 through 10 to find gaps in student learning, and then teachers intervene with instruction to fill these holes.

Also, teachers can organize group instruction for students who may be having similar problems with a particular subject. The important thing to remember, Campbell said, is that academic help is available, and that students or parents should feel free to seek this help if needed.

“There just needs to be constant communication, so that students’ needs can be best met,” he said.

The N.H. Department of Education released a statement saying multiple steps are being taken to help students succeed after pandemic-related disruptions in their education.

“New Hampshire is working to enhance and expand education in the classroom and in the real world, understanding that learning can happen anywhere. Access to learning is paramount in our schools and beyond, which is why the state has been working to reimagine learning and provide multiple pathways to achievement.”

The statement touted the department’s Learn Everywhere alternative program for granting credits toward graduation, including in music and robotics.

It also mentioned Education Freedom Accounts, which provide financial support for low- and moderate-income families to pay for private school or other non-public school expenses.

While proponents of these accounts say it is a boon for education, opponents say they siphon needed money from public schools.

The state has also received more than $650 million from the American Rescue Plan Elementary and Secondary Relief Fund for spending on efforts to address missed learning and decreased social engagement during the pandemic. These efforts include tutoring, instruction groups and summer camps.