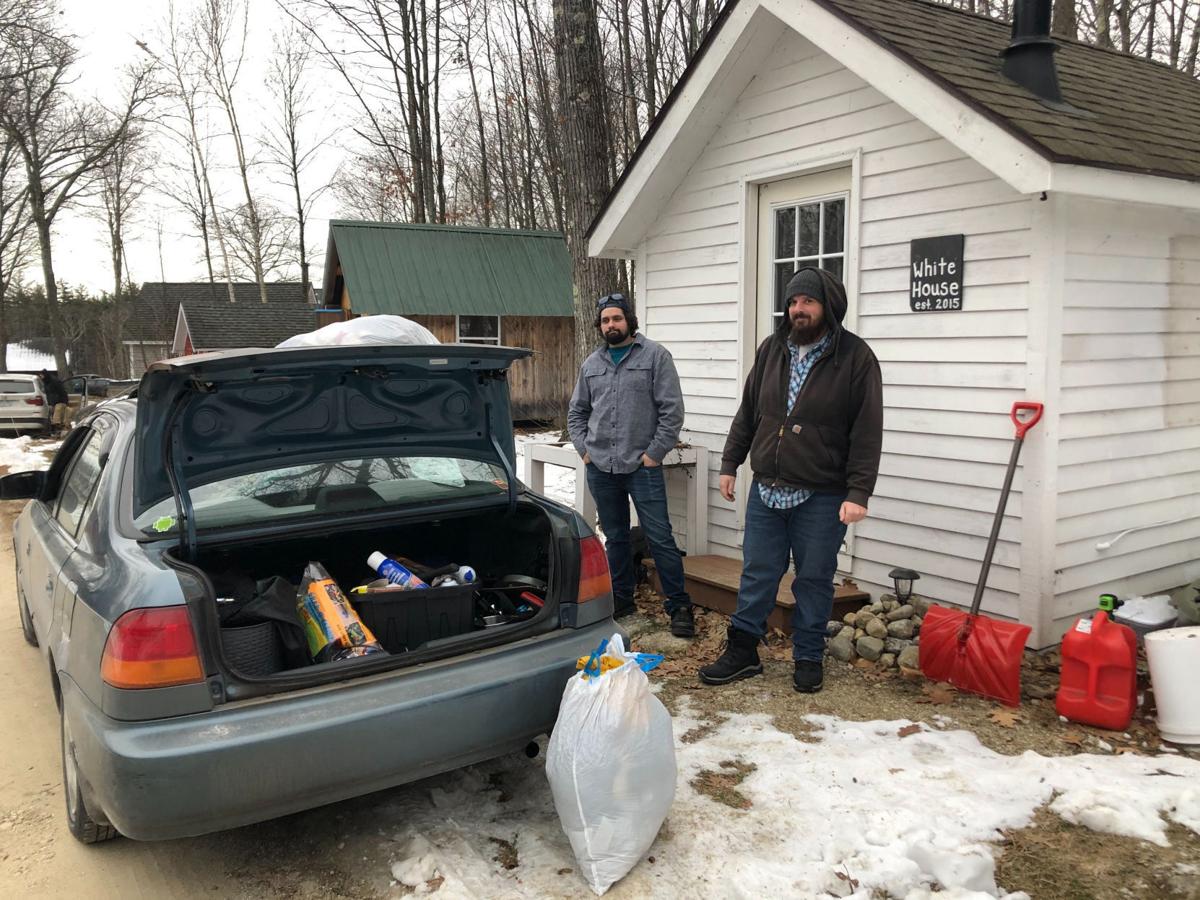 In this photo from December, Adrian Allard, right, and Thane Burgos are in front of Allard’s Walden Eco-Village casita in Peterborough, where he had lived since August 2019 before being forced to leave.

Steven J. Dutton, an attorney representing Walden Eco-Village landlord Akhil Garland, speaks during a Jan. 7 hearing for a class-action lawsuit that more than a dozen former residents of the Peterborough community have brought against Garland.

In this photo from December, Adrian Allard, right, and Thane Burgos are in front of Allard’s Walden Eco-Village casita in Peterborough, where he had lived since August 2019 before being forced to leave.

Steven J. Dutton, an attorney representing Walden Eco-Village landlord Akhil Garland, speaks during a Jan. 7 hearing for a class-action lawsuit that more than a dozen former residents of the Peterborough community have brought against Garland.

PETERBOROUGH — Former tenants of the Walden Eco-Village are not entitled to emergency housing relief they had sought in a lawsuit against their landlord and his business holdings, a court has ruled.

The plaintiffs — four of the 25 residents forced to leave the Peterborough sustainable-living community in December after town officials said they found dangerous code and zoning violations at the site — plan to continue pursuing their claims, according to Adrian Allard, a former Eco-Village resident who said he would join the suit if the court approves it for class action. (The court has not yet ruled on that issue, as the plaintiffs have requested. A class-action suit would allow anyone similarly harmed to receive compensation if it succeeds.)

In their Dec. 30 lawsuit, the former tenants accused Eco-Village landlord Akhil Garland of breaching their leases and violating state law by having failed to secure proper permitting for the site, as outlined in the town’s Dec. 11 cease-and-desist letter to Garland. They argued that under RSA 540-A:4, Garland must provide alternative housing, compensate them for all moving expenses and reimburse their rent at any new lodging for the rest of their Eco-Village lease.

Hillsborough Superior Court Judge Diane Nicolosi ruled in a Feb. 10 order, however, that because Garland may not have been aware of the town-alleged code violations, he is not obligated to provide emergency relief.

“It appears Mr. Garland was as surprised by the cease and desist letter as the tenants were,” Nicolosi wrote.

Allard said Monday that the ruling was not particularly surprising, adding that he has “tried to learn not to expect much of Akhil.”

After residents’ town-imposed Dec. 16 ouster from the Eco-Village, Allard lived briefly at the Jack Daniels Motor Inn in Peterborough, where Garland paid for his room. He then moved to the Birchwood Inn in Temple, where he said management let him stay at no charge.

Allard left the inn Saturday morning because they needed his room for a Valentine’s Day reservation, he said. He does not plan to return, saying the inn was already very generous toward him, and instead plans to couch-surf.

Although Nicolosi rejected the former tenants’ request for emergency relief, another of their requests — for the return of all security deposits — has been satisfied, according to Garland.

Steven J. Dutton, an attorney with the Manchester law firm McLane Middleton who is representing Garland, told Nicolosi in a Jan. 7 hearing that Garland had returned security deposits to all but one of the residents at that time. (Garland had not sent the last deposit because he did not have an address for that tenant, Dutton said.)

Garland said Monday that he returned all the deposits “well within” 30 days from the end of residents’ tenancy, as required by state law, including the deposit of the tenant whose address was in question.

He declined to comment on Nicolosi’s Feb. 10 order, referring a request to Dutton while litigation is pending. Dutton said Tuesday morning that he found the order “thorough and well-reasoned.”

The legal dispute stems from Peterborough officials’ Dec. 10 inspection of the Eco-Village property, off Middle Hancock Road, during which they found unapproved utilities connections and permanent residences unauthorized for that use. In its cease-and-desist letter the next day, the town said some of the violations posed an immediate danger to residents and ordered everyone to vacate the property by Dec. 16.

Garland is still considering whether to contest Peterborough’s handling of the Eco-Village situation, according to Dutton. He declined to provide more information about Garland’s objections but said they pertain to the town’s “manner and approach” to enforcing its order to vacate, in addition to “many of the details” involved.

The former tenants’ class-action case against Garland remains ongoing, with several of their claims still outstanding.

Those include a request that Garland reimburse them for any rent they owe at a new unit, for the remainder of their Eco-Village lease, that exceeds what they would have paid at the Peterborough community. (Monthly rent ranged from $445 for a tiny home, or “casita,” to $1,472 for the most expensive cottage, according to court filings.)

Peterborough attorney Jason Bielagus, representing the plaintiffs, argued at the Jan. 7 hearing that they are entitled to that compensation because Garland failed to ensure the site was to code and thus violated tenants’ rights “to quiet enjoyment” of the property, per RSA 540-A:2.

“What he provided was not a habitable residential unit,” Bielagus said. “… When the tenants are told they cannot live there, that is a breach of the covenant of quiet enjoyment.”

Dutton responded that the residents made a “deliberate choice” to live at the Eco-Village, which, he said, they knew was designed as a sustainable, low-impact community without large buildings or substantial electrical connections.

“Throughout all of this, not one tenant made a single complaint,” he said.

While acknowledging that the Eco-Village homes were offered at a “very reasonable rent,” Nicolosi wrote in her order that any legal penalties “are not intended to compensate for losses, but rather serve only to deter.” The next hearing in the Eco-Village case is scheduled for April 7.

Meanwhile, Garland is moving ahead with plans to subdivide and expand the Eco-Village property — the proposal, which he first introduced in July, that prompted the Dec. 10 site inspection.

In a Feb. 8 presentation to the Peterborough Planning Board, Chad Branon, an engineer for the Milford firm Fieldstone Land Consultants, said the project would involve bringing to code the seven existing cottages and building 19 new residences, according to Laura Norton, an assistant in the town’s Planning & Building office. The casitas would be repurposed as sheds or workshops, she said.

The board plans to hold a hearing for the Eco-Village subdivision proposal March 15, Norton said.