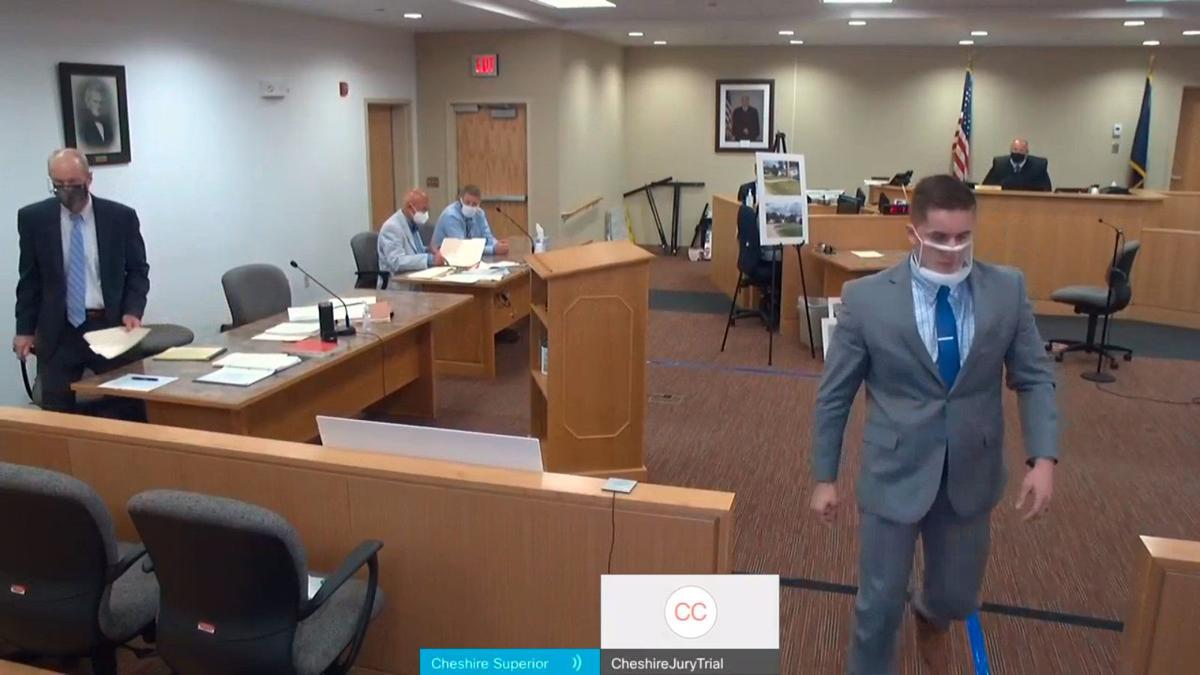 Swanzey police officer Jesse Mabe leaves after testifying during Monday’s trial in Cheshire County Superior Court in Keene. Mabe wears one of the clear face masks all witnesses wore to ward against the spread of COVID-19 while still enabling jurors to observe their demeanor. The proceedings were streamed live, as shown in this screenshot. 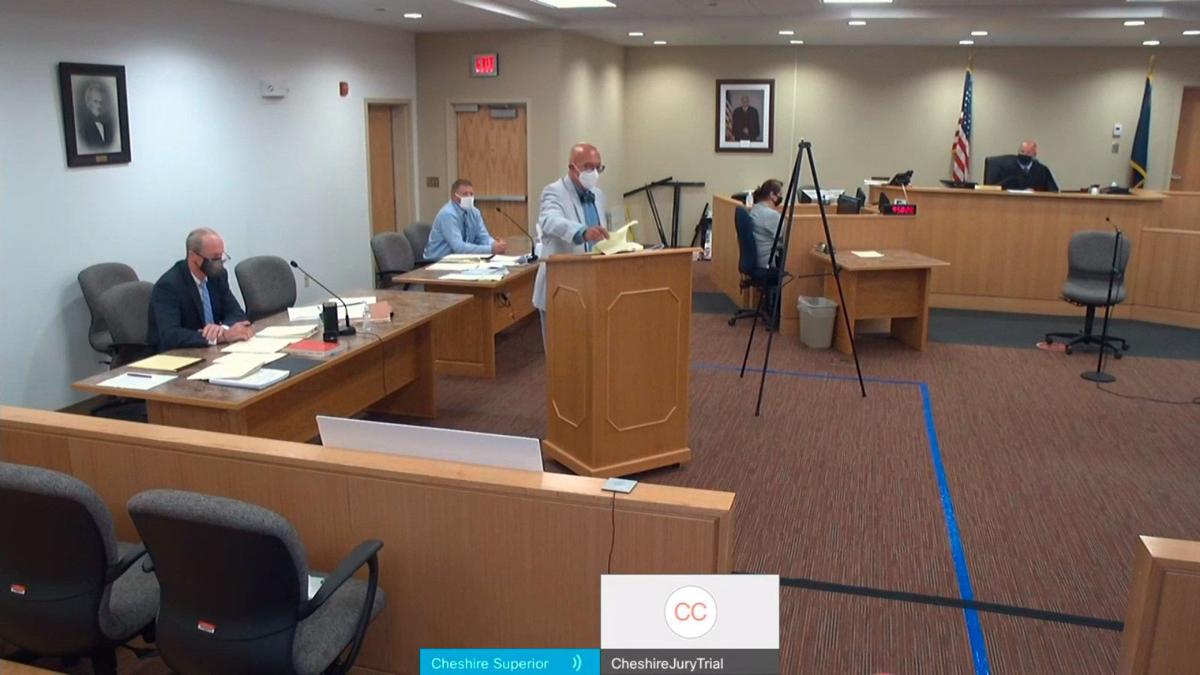 Defense attorney Joseph S. Hoppock, at the lectern, addresses the jury during Monday's trial proceedings, which were streamed live, as shown in this screenshot.

Swanzey police officer Jesse Mabe leaves after testifying during Monday’s trial in Cheshire County Superior Court in Keene. Mabe wears one of the clear face masks all witnesses wore to ward against the spread of COVID-19 while still enabling jurors to observe their demeanor. The proceedings were streamed live, as shown in this screenshot.

Defense attorney Joseph S. Hoppock, at the lectern, addresses the jury during Monday's trial proceedings, which were streamed live, as shown in this screenshot.

It was the speech Cheshire County Superior Court Judge David W. Ruoff gives jurors at the start of every trial: Don’t read news stories about the case. What the witnesses say is evidence; what the lawyers say is not. The defendant is presumed innocent, unless and until the state proves his guilt beyond a reasonable doubt.

But there were some noticeable additions Monday.

“The defendant and his or her attorney are permitted to sit close to each other and to remove their masks from time to time to allow the proper communication, which is guaranteed by the Sixth Amendment to the Constitution,” Ruoff said. “You must not consider the fact that the defendant and the defense attorney remove their masks, or that they have been permitted to sit together, as any evidence in this trial.”

Ruoff was presiding over the New Hampshire court system’s first jury trial of the COVID-19 era. Starting in March, jury trials and most other in-person proceedings were suspended due to concerns about the novel coronavirus spreading. Many hearings have since been held virtually, and cases have continued to move through the system.

But the N.H. Judicial Branch determined that it could not hold virtual criminal trials without “a host of constitutional concerns,” Chief Justice of the Superior Court Tina Nadeau said in a June 30 news release. Nor could it postpone them indefinitely; the Sixth Amendment guarantees defendants a “speedy and public trial,” even though the vast majority of criminal cases today are resolved through plea agreements.

The plan announced by the court system earlier this summer called for cautiously resuming in-person trials — starting with a pilot in Cheshire County Superior Court due to the county’s relatively low rate of infection.

The precautions required to do that safely were on display Monday in the Keene courtroom, during a one-day trial of a Marlborough man on charges of simple assault and resisting arrest. (The Sentinel viewed it via livestream on the judiciary’s website due to restrictions on in-person attendance.)

The judge, jury, attorneys and everyone else in the courtroom wore masks. The room had been rearranged because of the need for physical distancing. The two attorneys’ tables were placed along the wall opposite the jury box, which held only half the jury. The rest sat in front of it or in the public gallery.

Witnesses testified from an office chair in the middle of the room, rather than the witness stand, which has more surfaces to touch. They wore clear face coverings, so jurors could judge their demeanor as they spoke.

The defense attorney, Joseph S. Hoppock, and prosecutor, Cheshire County Attorney D. Chris McLaughlin, shared a lectern that they wiped down between uses. “I never imagined this would be part of my job,” McLaughlin joked at one point.

In an interview after the trial, McLaughlin said it was easy to adjust to the new rules. “I think the hardest thing is just wearing a mask for so long and trying to speak clearly with a mask on in a big room,” he said.

More cumbersome was the multi-step jury-selection process completed last week, with successive rounds of questionnaires, teleconferences and in-person questioning, he said. Hoppock, though, said he thought the individual interviews allowed the lawyers to learn more about jurors than the usual group format.

Overall, Hoppock wrote in an email, “I was impressed with the detail and how carefully [the protocols] were applied. While we may be overreacting to a degree, I don’t believe that anyone could feel unsafe.”

The question before jurors was whether Dana T. Goodnow, 37, of Marlborough, had struck Swanzey police officer Jesse Mabe twice in the face and resisted two officers’ efforts to arrest him during a Sept. 27 incident in that town. He was charged with four misdemeanors.

Mabe and the other officer, Joseph Szuch, said they had been called to a home on Pondview Drive that night for a report of a custody dispute between Goodnow’s daughter and the father of her young child.

Mabe and Szuch testified that they were in the front yard when Goodnow drove up. The officers said he seemed agitated and walked toward the house in what they thought was an aggressive manner.

Mabe testified that he stepped in front of Goodnow, telling him to stop, and put his hands out in front of him. Mabe said Goodnow raised both his fists and struck him in the face. Szuch said he saw the alleged assault and came over to assist, and the three of them went down to the ground.

Mabe said he was struck in the head again during the tussle. Goodnow became compliant after Mabe struck him twice in the face and he was handcuffed, according to the two officers.

Hoppock contended the officers’ force had not been justified. The defense’s only witness was Pennie Goodnow, Goodnow’s ex-wife. She testified that she was watching the encounter and did not see Dana Goodnow strike Mabe before the officers took him down. She also disputed other aspects of the officers’ testimony.

McLaughlin argued her testimony was not credible, in part because she never reported the excessive force she said she had witnessed to the Swanzey Police Department or another authority. She responded that she had figured it wouldn’t do any good.

Hoppock also questioned why officers had not taken statements from Pennie Goodnow or Dana Goodnow’s daughter about the use of force. At one point, Hoppock suggested a Taser would have been a safer way of stopping Goodnow, and asked why Mabe hadn’t used one.

“Nothing that had occurred up to that point would have reasonably warranted me deploying a Taser on Mr. Goodnow,” Mabe answered. Asked by McLaughlin, Mabe said it would have violated departmental policy and added, “I believe I’d also most likely be violating state law at that point.”

The closing arguments were over by 2 p.m. After about an hour, the jury found Goodnow guilty on all counts. His sentencing will be set for a later date. (Only three of the convictions will remain. The fourth count was an alternate version of the same actions and will ultimately be dismissed.)

The court system has continued to hold virtual hearings on plea agreements, which resolve the vast majority of criminal cases. But McLaughlin estimated his office has about five to 10 serious felony cases with incarcerated defendants that are in a “holding pattern” because of the suspension of jury trials.

Up to 400 cases were delayed statewide, Nadeau, the superior court chief justice, said in July. The court system did not respond to a request for an updated figure by press time.

Assuming Cheshire County held a successful pilot trial, she said, the courts would begin scheduling fall trials in other parts of the state.