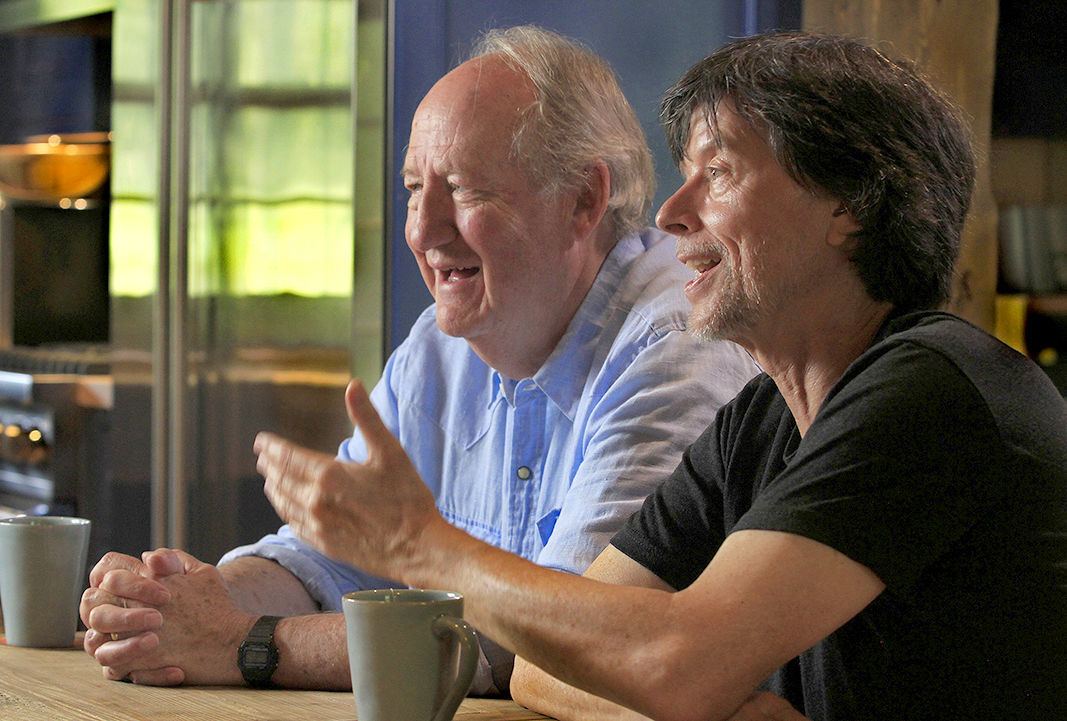 Dayton Duncan, left, and Ken Burns talk about country music and more in an interview with The Sentinel in Walpole Thursday. 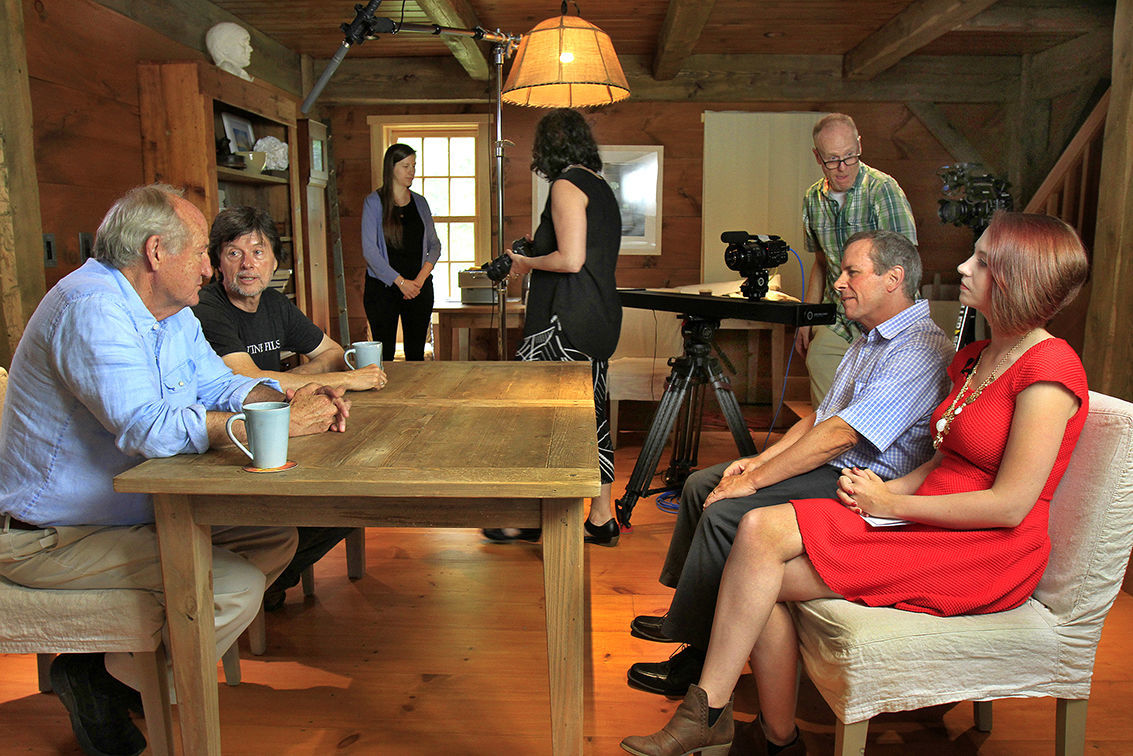 Ken Burns and Dayton Duncan sit down with Sentinel staff in Walpole Thursday. Sentinel reporter Sierra Hubbard and columnist Steve Gilbert conducted the interview with the film-making duo. New Hampshire PBS crew were on scene to tape the interview. 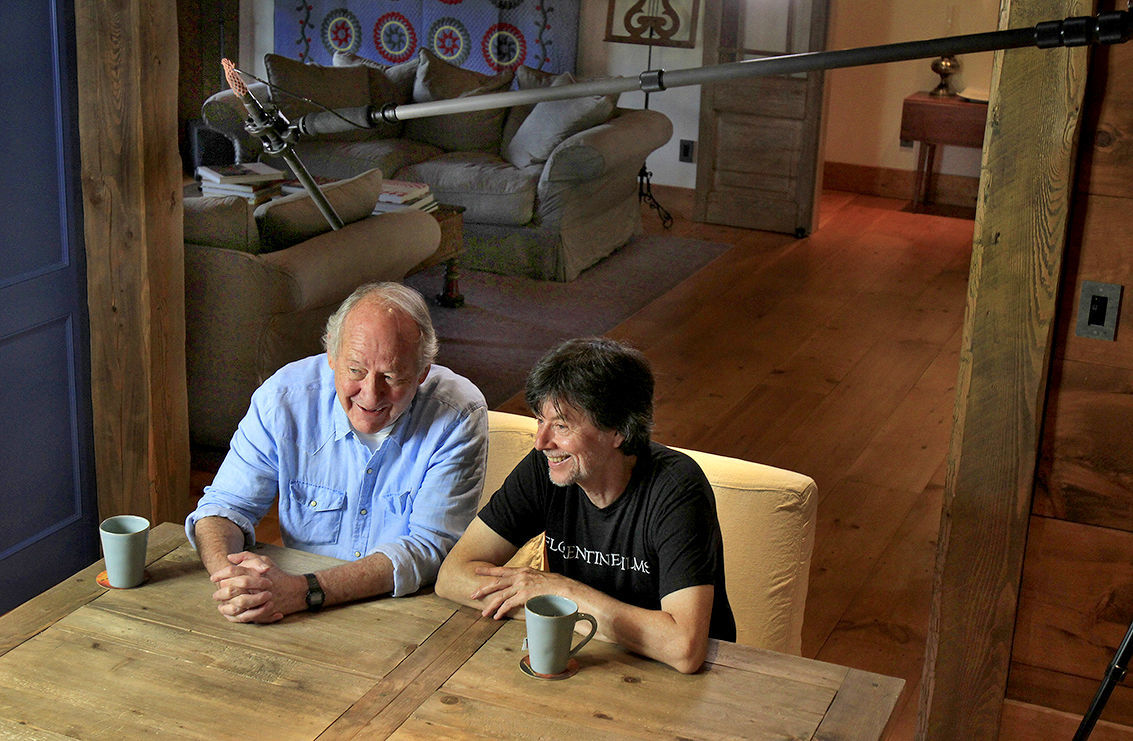 Ken Burns and Dayton Duncan chat with Sentinel staff prior to a television interview in Walpole Thursday.

Dayton Duncan, left, and Ken Burns talk about country music and more in an interview with The Sentinel in Walpole Thursday.

Ken Burns and Dayton Duncan sit down with Sentinel staff in Walpole Thursday. Sentinel reporter Sierra Hubbard and columnist Steve Gilbert conducted the interview with the film-making duo. New Hampshire PBS crew were on scene to tape the interview.

Ken Burns and Dayton Duncan chat with Sentinel staff prior to a television interview in Walpole Thursday.

WALPOLE — Country music is about much more than drowning your sorrows in a beer or whisky.

The Sentinel spoke with Burns and Duncan Thursday morning in a wide-ranging interview filmed by New Hampshire PBS.

Sitting in a barn in Walpole that houses film crews during production, the two men sipped tea from matching mugs and fed off each other’s excitement for the “Country Music” documentary, always answering a question but looking to the other to provide more background or context.

Their film, he said, attempts to “communicate the extent to which this extraordinary form, sometimes burdened and imprisoned by a superficial kind of understanding of it, has transferred to the American people over decades … some of the most powerful emotions human beings have that are universal.”

Duncan reflected on a couple of his personal favorites, such as “Sunday Mornin’ Comin’ Down” by Kris Kristofferson, which follows a man hung over and feeling suddenly disconnected from the world around him, and Emmylou Harris’ “Boulder to Birmingham,” an ode she co-wrote after the death of her friend and mentor, Gram Parsons.

“... The thing that we didn’t quite get until it hit us over the head was just how powerful, how moving the stories were, but the music was,” Burns said. “… At the end of the day, I can go home and I could start singing you this stuff and burst into tears because it’s just so, so powerful.”

Their series also addresses the genre’s history, which has roots in immigrant music and African instruments as slaves were brought to America.

“We don’t ignore the fact that over time most of the prominent commercial artists were white, not black, but that’s not the same as the music,” he said.

For the artists, it was never segregated, Duncan said. He instead pointed to the music industry, which marketed and commercialized the genre, separating records made by and for black Americans as “race music,” for instance.

A clear example of the country music’s richness, Burns said, is Lil Nas X, a rapper whose song “Old Town Road,” featuring country music artist Billy Ray Cyrus, climbed to the top of the Billboard Hot 100 chart and has remained there for 18 weeks, setting a record.

The song also debuted on the Hot Country Songs chart at No. 19, but Billboard removed it in March, telling Rolling Stone that, despite the lyrics’ references to cowboy imagery, the song “does not embrace enough elements of today’s country music” to qualify.

Putting the controversy of Billboard’s removal aside, Burns said Lil Nas X is evidence that the genre isn’t limited to one race or demographic.

“He has the number-one best-selling single of all time,” he said. “It’s a country song, and he is a gay, black rapper. That is the American case rested, your honor.”

The Colonial Theatre in Keene will host a “first look” screening of “Country Music,” which includes clips from all eight episodes, on Wednesday, Aug. 14.

Doors open for the screening at 7 p.m. Tickets, which are nearly sold out, are $20 and include a Q&A afterward with Burns, Duncan and Dunfey.

VIP passes are available for $60, which include a catered reception at 6 p.m. with Burns.

Along with the screening at The Colonial, Keene will be alive with events throughout the day to celebrate the release of “Country Music.” Wednesday has been dubbed “Ken Burns Day” by New Hampshire PBS, which airs Burns’ documentaries and is celebrating its 60th anniversary.

From 10 a.m. to 5 p.m., the Cheshire Children’s Museum will help kids make guitars with recycled materials and play their own country tunes. Then Keith Murphy and Becky Tracy will perform from 10:30 a.m. until 12:30 p.m. with their combination of fiddle, guitar, foot percussion and English and French singing. (Admission is $7 for ages 12 months and up, $5 for 60 and up.)

A barbecue lunch will be served at the Monadnock Food Co-op from noon until 2 p.m. (Cost is $10 per plate.)

At 3 p.m., the dance, theater and art students of MoCo Arts’ summer camp will present “MoCo Goes Country.” (The performance is free, though donations are welcome.)

From 4 to 5 p.m. at The Colonial, the production, editing and post-production teams from Florentine Films will host a free panel discussion, moderated by post-production supervisor Daniel White of Keene, to describe their work on “Country Music” and answer audience questions.

Co-producer Pam Tubridy Baucom said she’s excited for “the opportunity for our staff to have a panel and for people to come and ask them questions. It’s sort of a day for them to shine, too, as well as Ken and Dayton and Julie.”

The Thorne-Sagendorph Art Gallery at Keene State College will open its exhibit, “This Is Country: Photographs From Country Music, A Ken Burns Film,” which will be in the gallery through Dec. 6. Visitors can also bid on some of the photography used in the documentary and see one of the autographed guitars that’s also up for auction. The gallery will be open from 11 a.m. to 7 p.m. Wednesday, with music from Scott Ainslie from 2 to 3. (Admission is free.)

Machina Kitchen and ArtBar will host a post-screening party from 9:30 to 11 p.m., complete with live music from Eric Gagne and a full dinner menu.