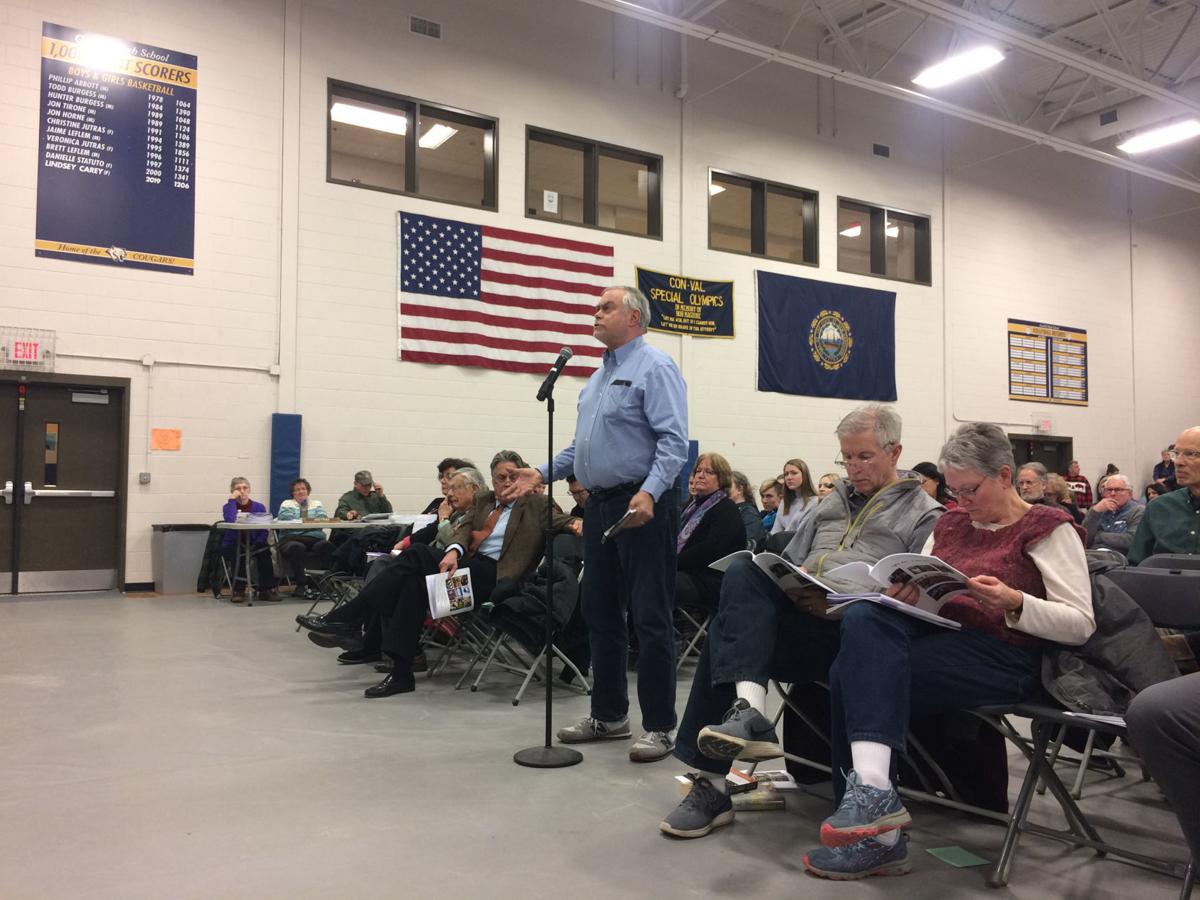 Tom Welden of Hancock, a former chairman of the ConVal Regional School Board, asks a question about the budget at the district's annual deliberative session at the high school in Peterborough Tuesday. 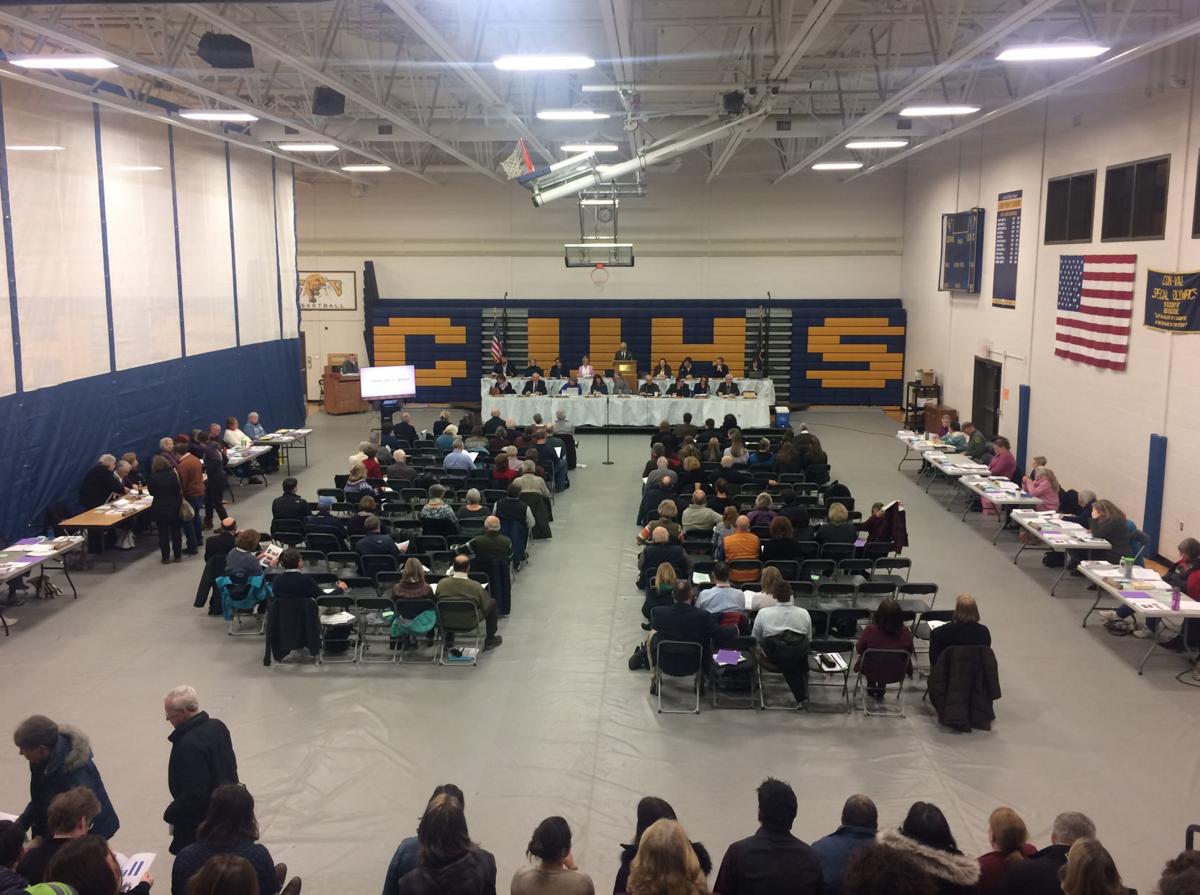 Residents of the ConVal Regional School District's member towns gathered in the high school's gym in Peterborough Tuesday for the annual deliberative session. 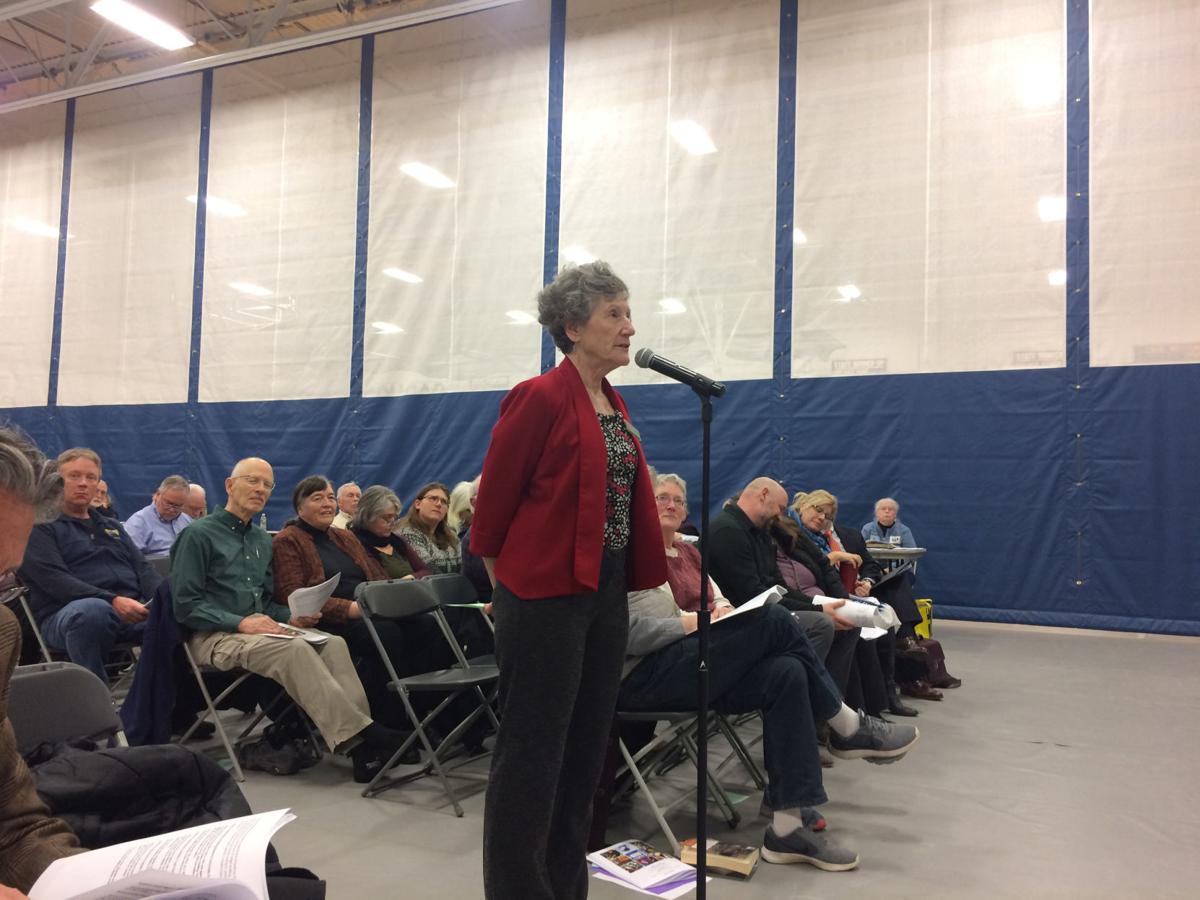 N.H. Sen. Jeanne Dietsch, D-Peterborough, was among those who spoke at ConVal Regional School District's annual deliberative session at the high school in Peterborough Tuesday.

Tom Welden of Hancock, a former chairman of the ConVal Regional School Board, asks a question about the budget at the district's annual deliberative session at the high school in Peterborough Tuesday.

Residents of the ConVal Regional School District's member towns gathered in the high school's gym in Peterborough Tuesday for the annual deliberative session.

N.H. Sen. Jeanne Dietsch, D-Peterborough, was among those who spoke at ConVal Regional School District's annual deliberative session at the high school in Peterborough Tuesday.

PETERBOROUGH — As presidential candidates fanned out across the state before the primary, residents of the ConVal Regional School District gathered for another rite of New Hampshire democracy.

The district’s deliberative session Tuesday night drew more than 130 voters from nine towns to the ConVal Regional High School gym, though few spoke. The 10 warrant articles — which include the $50.6 million budget and authorization to install solar panels at the high school — moved to the ballot with little discussion and no amendments.

At the start of the session, Superintendent Kimberly Rizzo Saunders explained changes between the current year’s budget and the proposed 2020-21 budget that goes before voters March 10.

Most of the other appropriations on the warrant would come out of any end-of-year surplus funds, rather than new taxes.

Saunders said the biggest driver of the proposed budget increase is personnel, including 3.2 new positions as part of a plan to expand preschool. More children are showing up for kindergarten without the emotional skills they need, and research has shown preschool saves money in the long run, she said.

Other changes include necessary equipment replacements and a $140,000 contractual increase in transportation costs.

If the budget fails to pass, a default budget of $49,142,616 would take effect. A default budget reflects the current year’s budget, plus certain adjustments set by law.

Saunders said the $1.4 million shortfall, were the district to operate under the default budget, would require cuts to staff, programs, facilities and supplies. Administrators would start with those items that have the smallest direct impact on students, she said.

Former school board chairman Tom Welden of Hancock asked why staffing is increasing when the district’s enrollment has declined. “We keep adding things on; the population is not increasing,” he said.

Welden said some elementary schools are well below capacity, creating a financial burden. “We cannot afford to keep passing on this,” he said. (No articles related to school consolidation are on the warrant this year.)

Otherwise, there was little discussion of the budget and most other articles. Welden stood up again toward the end and contrasted the day’s session with previous district meetings where, he said, hundreds would show up for lively discussions.

“It’s a sad state of affairs that we no longer have a dialogue about spending $50 million,” he said.

Two voters quickly got up to speak in support of the proposed budget. Ken Phillips of Peterborough warned the default budget could harm programs that enrich the experience of many students — including his daughter, a member of the Nordic ski team.

As he spoke, seven or eight members of the Nordic team in yellow uniforms stood up in the bleachers.

Not to be outdone, Holly Wilson — a Francestown resident who coaches Alpine skiing — strode to the mic with three team captains.

“Please remember that sports do build consensus,” she said. “And just these kids being here tonight is an indication of that.”

The team plans to put out signs encouraging people to vote for the proposed budget, she said. “This team really wants to get the vote out.”

In addition to the budget, articles on the warrant propose putting up to $550,000 into the school building capital reserve fund, $25,000 into the athletic trust fund and $25,000 into the health trust fund, all drawn from whatever surplus funds the district has at the end of the fiscal year on June 30.

The district is also seeking authorization to enter a long-term power purchase agreement for energy generated by solar panels that would be built on the high school’s roof or elsewhere on the grounds, initially owned by a private company. After the first several years, the district would have the option to buy the panels, resulting in free electricity for the rest of the system’s lifetime.

Another article would set up a new fund for alternative-energy and energy-efficiency projects, with $70,000 raised through taxes. The fund would be used to save for the possible purchase of the solar panels, among other initiatives to reduce energy costs.