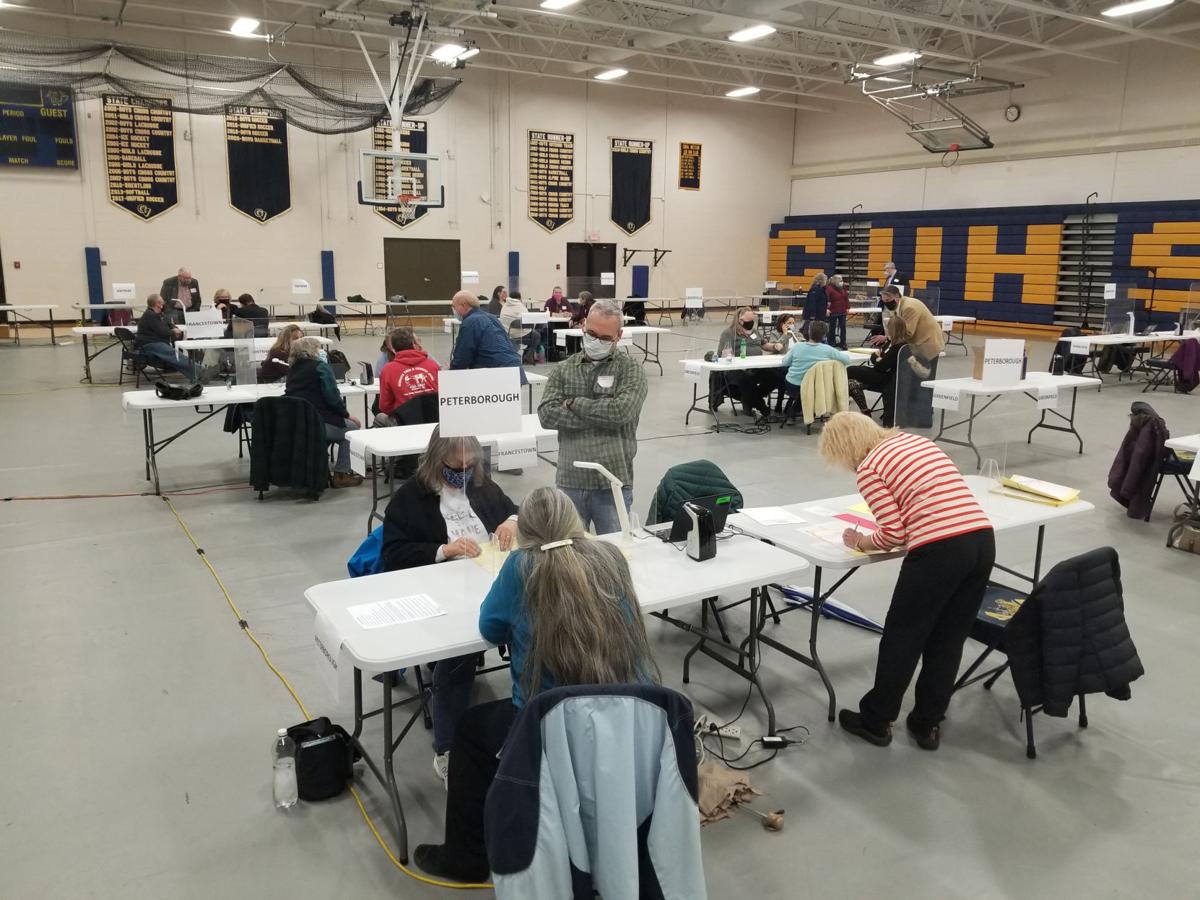 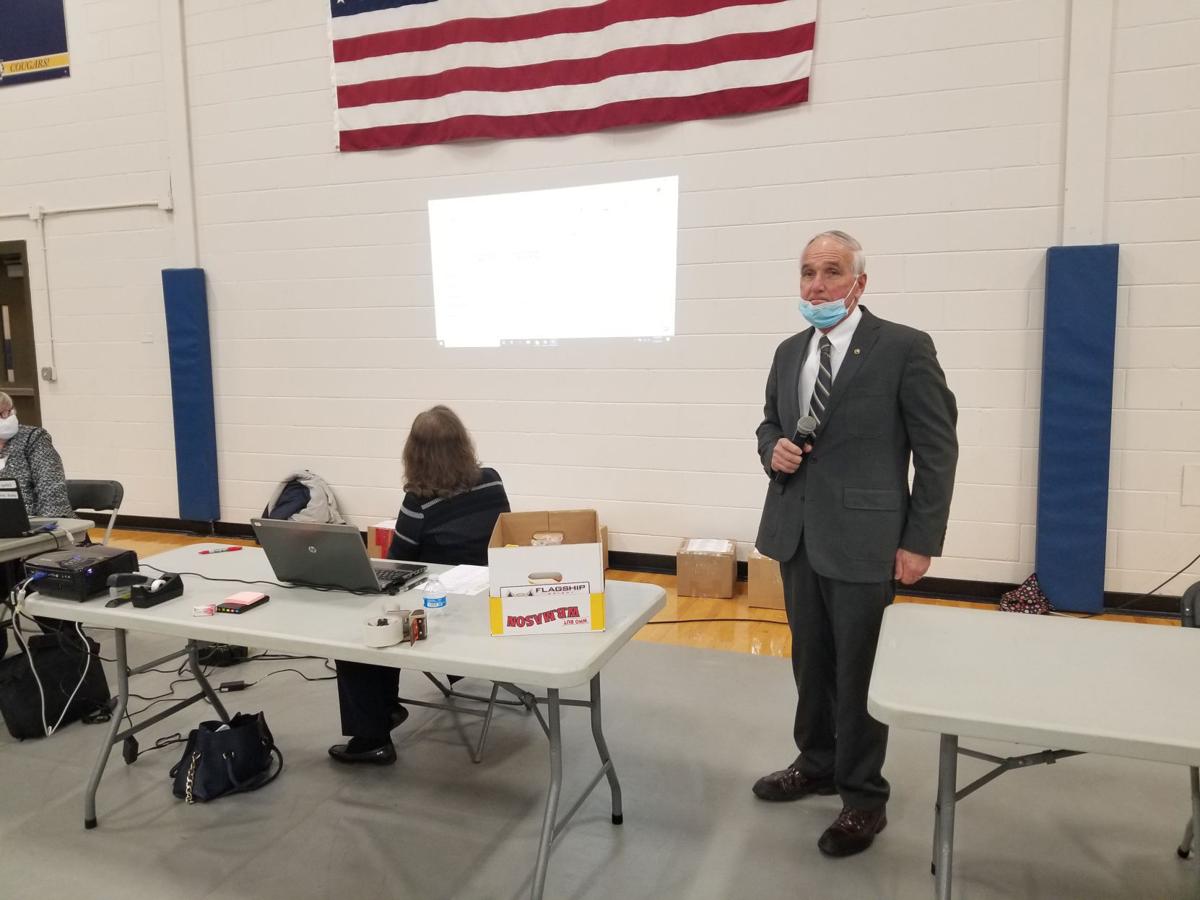 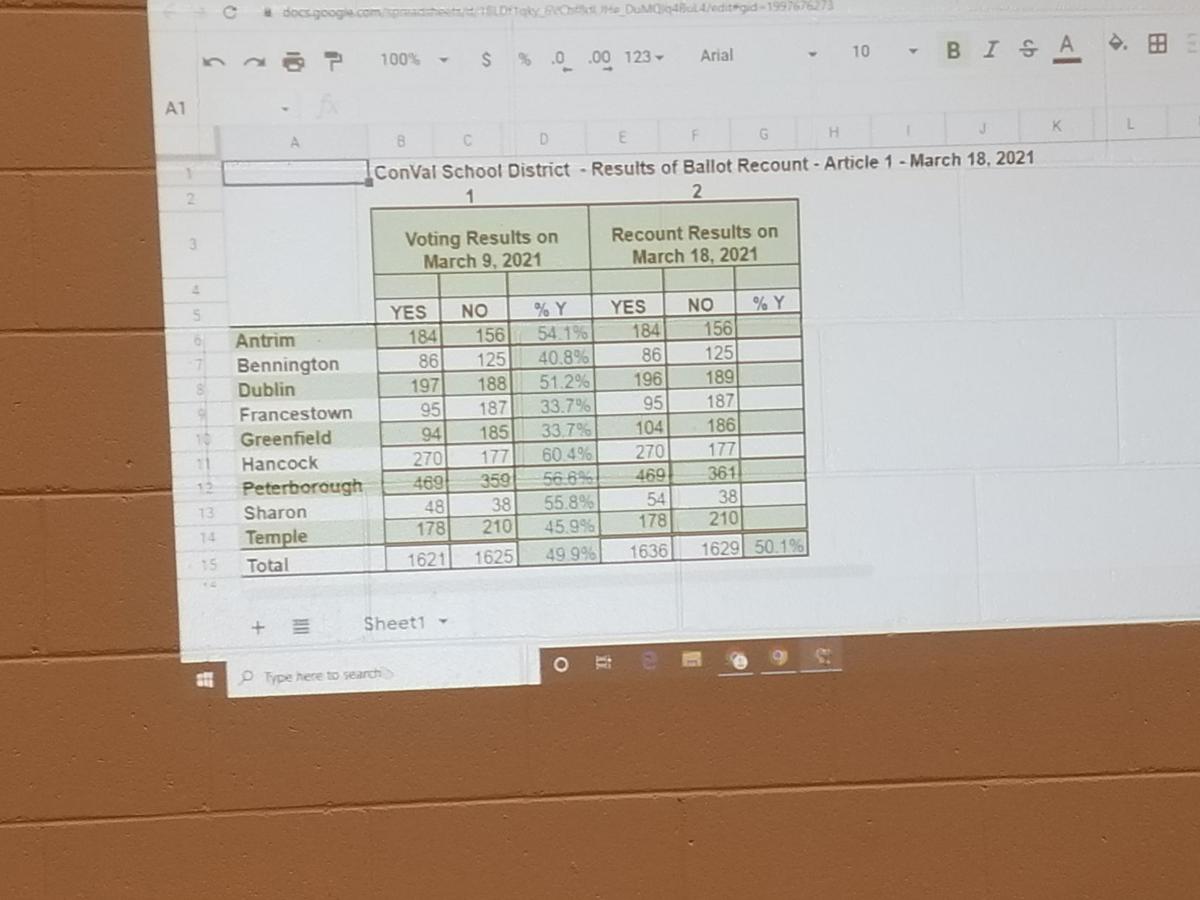 Results of Thursday’s recount — which showed that ConVal’s budget proposal actually passed last week — are projected on the wall of the high school gym.

Results of Thursday’s recount — which showed that ConVal’s budget proposal actually passed last week — are projected on the wall of the high school gym.

The recount, conducted by 36 volunteers from the district’s nine towns — Antrim, Bennington, Dublin, Francestown, Greenfield, Hancock, Peterborough, Sharon and Temple — showed the budget passing 1,636 to 1,629. Totals from last Tuesday’s election indicated the budget failed by four votes, with 1,621 people voting in favor and 1,625 against.

The biggest differences in the vote tallies between the election and the recount came from Greenfield and Sharon. The election-night count in Greenfield showed 94 people in favor of the budget, and 185 against, while the recount showed 104 “yes” votes and 186 “nos.” In Sharon, the margin went from 48 yes and 38 no to 54 yes and 48 no.

District Moderator Bob Edwards said he could not be certain why the overall vote total changed, but “as far as we’re concerned, these [recount results] are final.”

Volunteer counters worked in teams of four Thursday at tables spread throughout the ConVal Regional High School gymnasium in Peterborough, with one person counting ballots by hand, another tallying the totals, and two people observing them. Overhead document cameras captured the count in progress, which was broadcast on TVs throughout the gym. The result of the recount did not draw any objections from the roughly 20 district residents, including ConVal School Board members, who observed the approximately two-hour process.

Edwards added that any registered voter in the district now has five days to file an appeal of the recount, both with the district and in N.H. Superior Court. Ten district voters requested the recount.

The budget that did pass, according to the recount, is $1,954,610, or 4 percent, higher than the current year’s budget, an increase largely attributed to the addition of several staff members, according to the district’s annual report. Additionally, the district faces mandatory cost increases for contributions to the state’s retirement system, school board member Jim Fredrickson of Sharon, who chairs the board’s budget and property committee, said at the district’s deliberative session last month.

The 13-member school board is scheduled to meet tonight at 6 p.m. via Zoom to discuss next steps for the budget.

“In theory, now, we could go ahead with the budget as proposed, or we could make modifications to what some of those proposals were,” board Chairman Tim Theberge of Hancock said after the recount Thursday. “That’ll be the discussion we have [Friday] night.”

Specifically, Theberge said he expects the board to revisit the district’s proposal to appropriate $780,000 to staff a fully remote K-8 school as an option to families next year. Superintendent Kimberly Rizzo Saunders said at the district’s deliberative session that some students and families have benefited from remote learning during the COVID-19 pandemic.

“We had some students who were very successful, and we had some parents who want to access school this way moving forward,” Rizzo Saunders said at the Feb. 3 meeting. “While some parents really disliked it, we know that some of our students benefited, and this is the way that they want to move forward.”

Theberge said the proposed fully remote school was the budget item that generated the most feedback from voters who contacted board members.

“In theory, the voters have spoken, again, if you will, and so now we could leave that in, we could not leave that in,” he said. “I think that’s going to be a tough decision by the board. It’s a 50-50 split, essentially, of the voters. So we’ll have to go from there and figure that out.”

Theberge added that he expects the board to vote tonight on the next steps for the district’s budget.

“Now, that vote could be we’re actually not ready to do anything, and we’ll deal with it on April 6, at what would have been our next regularly scheduled meeting,” he said. “But we may also decide to make some decisions, so we’ll see.”

The meeting will include time for public comment, Theberge said. For information on how to access the meeting, visit schoolboard.convalsd.net.