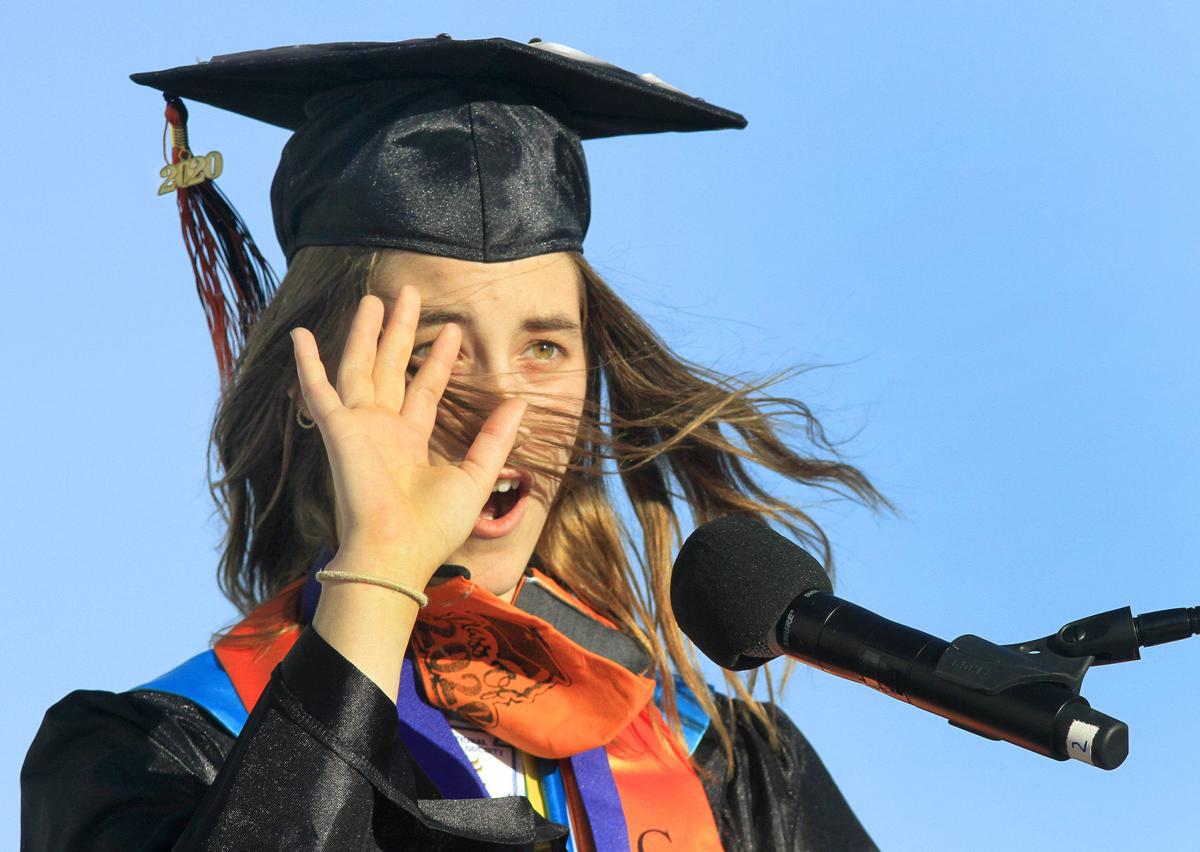 Battling a gust of wind, Conant class of 2020 valedictorian Georgia Wren Wolterbeek waves goodbye to her classmates at the end of her address during the graduation ceremony held at Silver Ranch Airport in Jaffrey Friday evening. 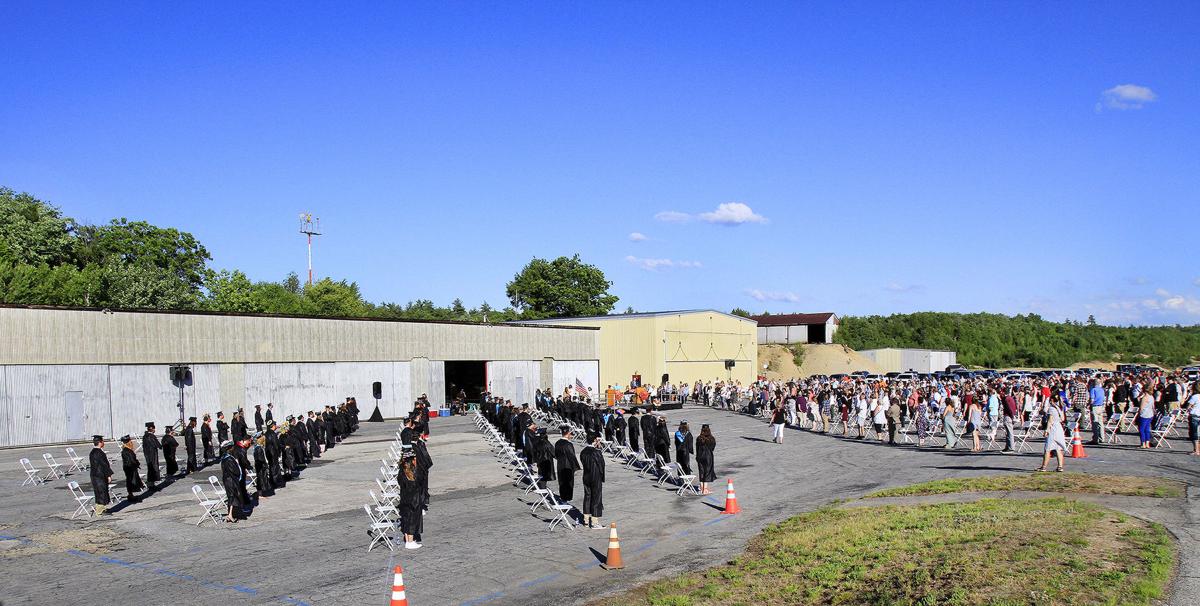 Conant’s graduating class of 2020 and the audience kept a safe distance between themselves during the graduation ceremony held at Silver Ranch Airport in Jaffrey Friday evening.

Battling a gust of wind, Conant class of 2020 valedictorian Georgia Wren Wolterbeek waves goodbye to her classmates at the end of her address during the graduation ceremony held at Silver Ranch Airport in Jaffrey Friday evening.

Conant’s graduating class of 2020 and the audience kept a safe distance between themselves during the graduation ceremony held at Silver Ranch Airport in Jaffrey Friday evening.

The school provided all 85 members of the Class of 2020 with masks in the school colors, orange and black, one of a number of preventive measures taken to allow the seniors to celebrate an in-person graduation ceremony in the midst of the coronavirus pandemic.

Seniors sat at least six feet apart and could invite only a maximum of four guests, whose seats were similarly spaced out. Everyone in attendance had their temperature taken upon arrival, and there were no handshakes or hugs as students crossed the stage set up outdoors at the Silver Ranch Airpark, though they did get to take off their masks for a photo after receiving their diplomas.

But for these students, who finished their time at Conant learning from home, the fact that they even got to gather for graduation made all of the precautions worth it.

“It’s been pretty hard on all of us since we’ve been in quarantine, not being able to see our best friends every single day in the hall, or even walk the halls that we once owned, or see our favorite teachers anymore,” Abigail Drew, Conant’s senior class president, said in her speech. “But I’m really thankful that we were able to have this ceremony here and gather together as a class.”

Valedictorian Wren Wolterbeek urged her classmates to focus not on the events they missed out on at the end of their senior year, but on the times they had together, and even the skills and attitude they have developed over the past few months.

“We have shown not only perseverance but adaptability, which is going to help us for the next chapters of our lives,” Wolterbeek said. “... When faced with an uncertain graduation, and disappointment, we did not despair. Instead, we all banded together to problem-solve and think of new ideas for our senior spring.”

The class invited David Dustin, an assistant principal at the school and its soon-to-be principal, to be the guest speaker at graduation. Dustin said he shares a special connection with this class, not only because they were some of the last students he taught in class before becoming an administrator, but because he, too, celebrated a graduation during an uncertain time.

“In my own not-too-distant graduation from college, in 2009, this year ended up being the peak of what would be one of the greatest financial recessions since the Great Depression,” Dustin said.” The ripple effects of that were felt all over, and it was a pretty scary time to be entering the world.”

To make it through that challenging time, Dustin said he relied on the support of the people closest to him, but he still had to find the strength to carry on. The Conant Class of 2020, he said, has all of those tools already.

“You know that you have a community here that cares deeply about each one of you. The perseverance part and the pushing-through part, that rests with you,” he said.

“We are the class of 2020,” she said. “It’s a new decade, and even though it started with fires, pandemics and murder hornets, we are stepping into the world with a solid foundation.”