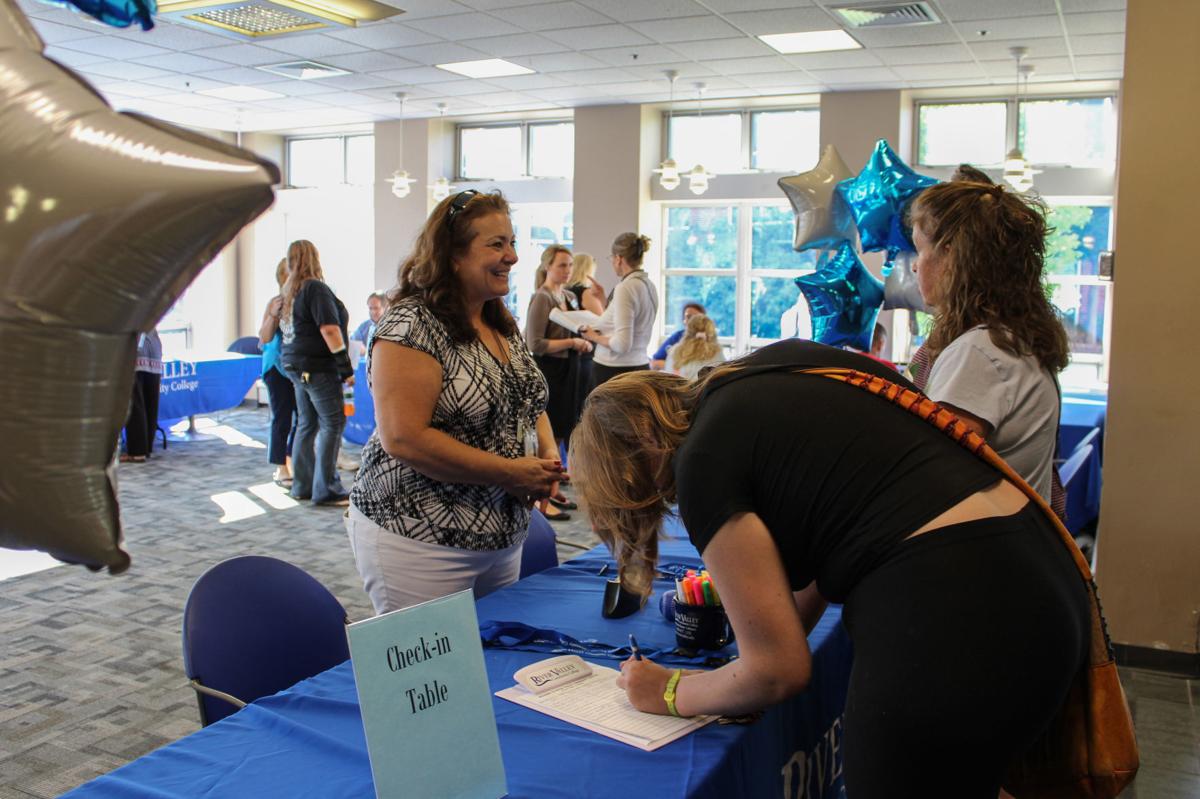 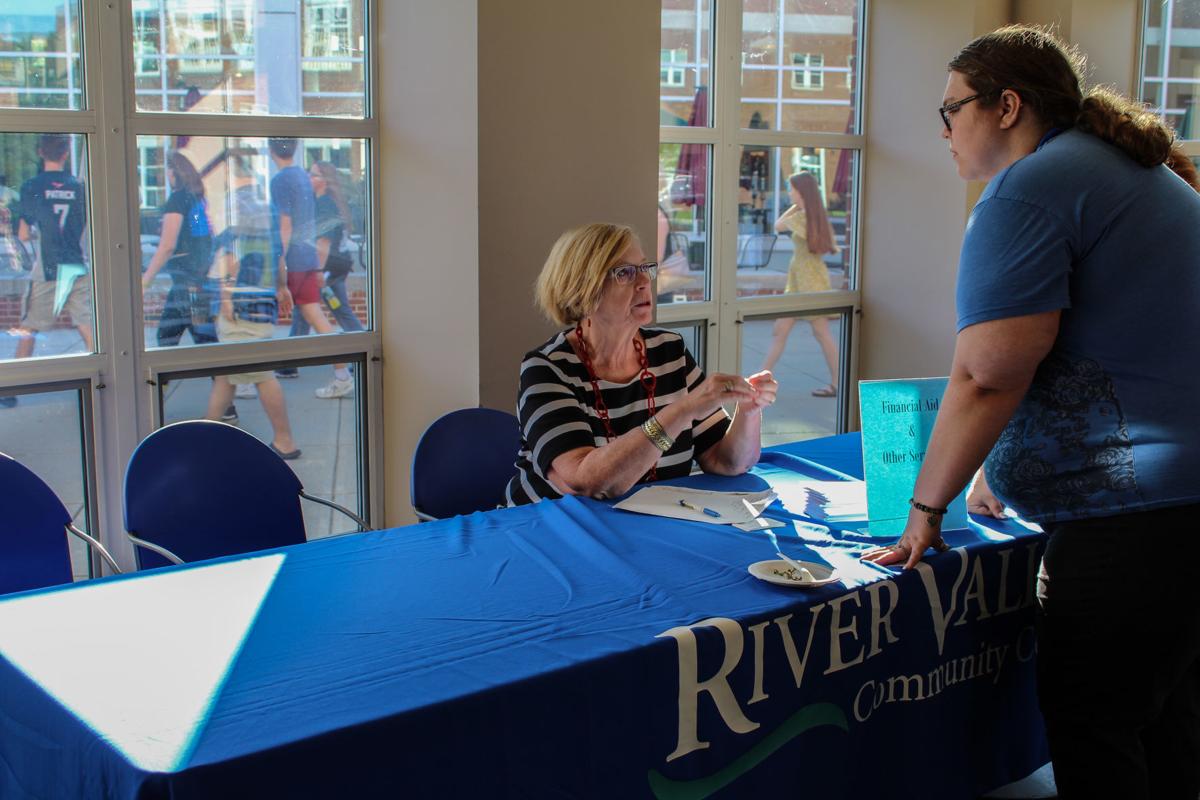 The community college’s Keene branch officially moved from its former space on Washington Street to Keene State’s campus this week, bringing to fruition plans that have been in the works for about a year. River Valley’s administrative offices are now housed in the Cheshire House at 67 Winchester St., while classes will likewise be held on campus in Keene State facilities.

Tuesday’s orientation gave River Valley students a chance to get a feel for the campus, find out where their classes will be and get any last-minute questions answered before school starts Monday.

Some said they are excited but nervous to be on a larger campus.

“I think it’s really awesome,” said Rhiannon Jarvis of Westmoreland, who is starting classes at River Valley this fall. “I was talking to my dad the other day because he used to work here in human resources, and he thought it was a great idea too. Just to have the cooler and newer resources, and the library — I’m really excited.”

Alfred Williams, president of the Claremont-based community college, which also has a location in Lebanon, said the move will allow River Valley to continue offering the same services and affordable education in a setting that offers more opportunities.

“It really benefits students because they get access to much more modern, much better facilities,” Williams said. “It’s always difficult when you’re running branch campuses, because they’re never an exact replica of the main campus.”

River Valley will pay rent to Keene State for use of the facilities, Williams said, though he declined to give an exact amount as it’s yet to be finalized. The two institutions plan to hold a celebratory event to sign an official memorandum of understanding within the next few weeks, he said.

According to Keene State President Melinda Treadwell, River Valley students will primarily have classes in the Putnam Science Center and Rhodes Hall. Because many of the community college’s classes happen at night, River Valley will use rooms that are typically left empty at that time, helping the college recoup some of its operations costs for those buildings.

“So there is a bottom line impact that covers our direct costs in a way that without a partner, we wouldn’t be. And so that’s clearly a net positive for us,” Treadwell said. “And I do think as we grow programs, we’ll draw more enrollments, both to the Community College System and to Keene State, and that makes sense in the long term.”

River Valley is also talking with Keene State about its students potentially being able to stay in on-campus dorms, use the fitness center and sign up for meal plans down the road, Williams said. For now, they’ll have access to Keene State facilities like the library and can buy food on campus.

About 150 students are expected to enroll at River Valley’s Keene location this fall, according to Shannon Reid, a spokeswoman for the Community College System of New Hampshire. As of last month, the expected headcount for Keene State this fall was about 3,450 students. This would mark a roughly 3 percent decrease from 2018-19 after several years of declining enrollment.

“Things that Keene State students have, our students, we’ll work out ways that they can pay for those things and have access to them if they choose so,” Williams said. “So those extra-curriculars are a real benefit.”

“I’m really excited about the food part,” he said Tuesday. “So many food options — even making your own sandwich.”

Colin Bent, a rising junior at Keene State, said he thinks having River Valley on campus is good for both institutions, and he’s interested to see how the community college students interact with the larger college community. Bent was at Tuesday’s orientation to act as a tour guide for River Valley students.

“It will be interesting to see what happens for sure. I think that there’s a high potential for [River Valley students to feel like part of the community], especially because they’re just going to be on campus,” Bent said. “... But I do think that, yeah, there’s a good chance that many of those students, especially those of similar age groups, will connect.”

Another benefit will be a more seamless transition for students who may want to continue their studies after graduating from River Valley, said Julie Robinson, an associate professor of biological sciences there.

“I think it’s nice for our students to be on a bigger campus, because lots of them will go on to bachelor’s degrees,” Robinson said. “So it kind of helps them ease our very small community into a bigger community and feel safe and comfortable that they can do that.”

Treadwell stressed that partnering with River Valley is part of Keene State’s wider mission to increase educational “pathways” for students, and said the two institutions are exploring how to collaborate within their nursing programs.

Keene State is also developing a partnership with Nashua Community College to offer precision manufacturing courses in Keene, she said, and is also in discussions with Lakes Region Community College and NHTI about ways to work together.

“I am grateful the community college is joining us, because they’re offering programs that we don’t offer — and it’s not in our business interest to build these up — but we need them available to this region,” Treadwell said. “So I’m very grateful, and I’m very excited about what the future can offer.”