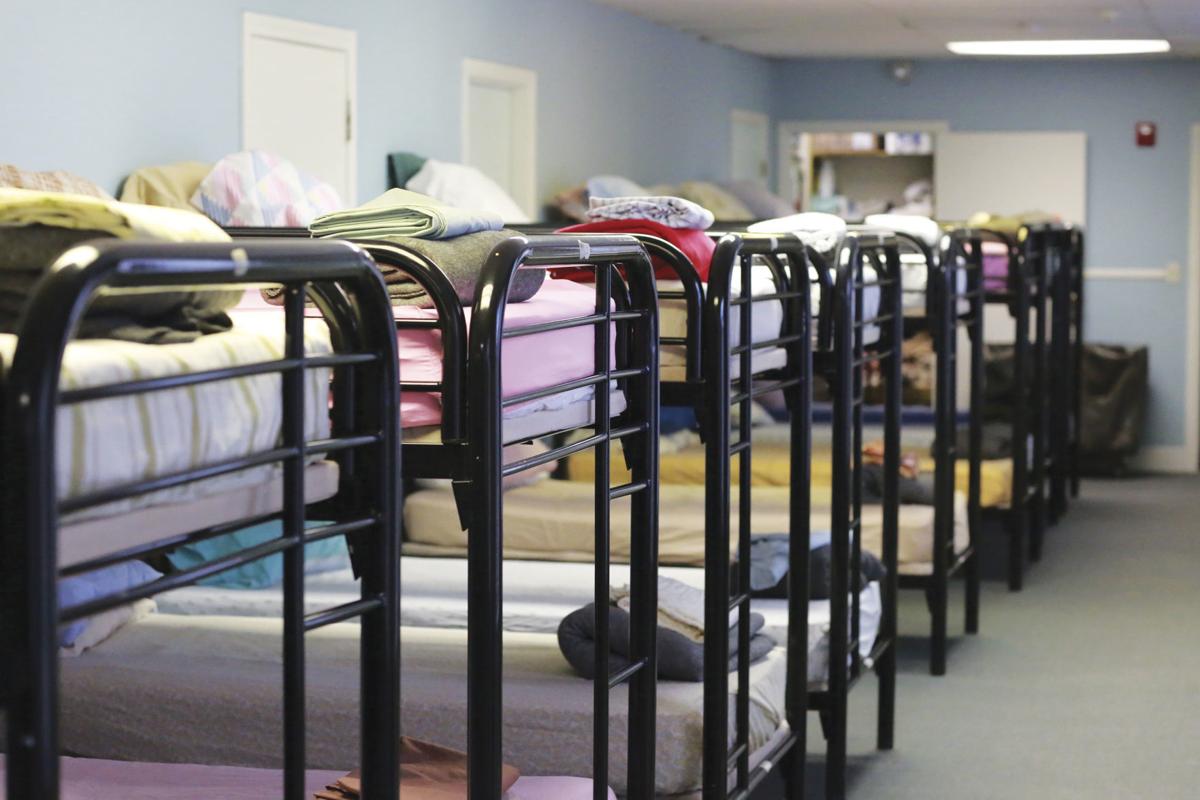 The beds, shown here, at Hundred Nights in Keene have been full or nearly full every night since the cold-weather shelter opened for the season in November. 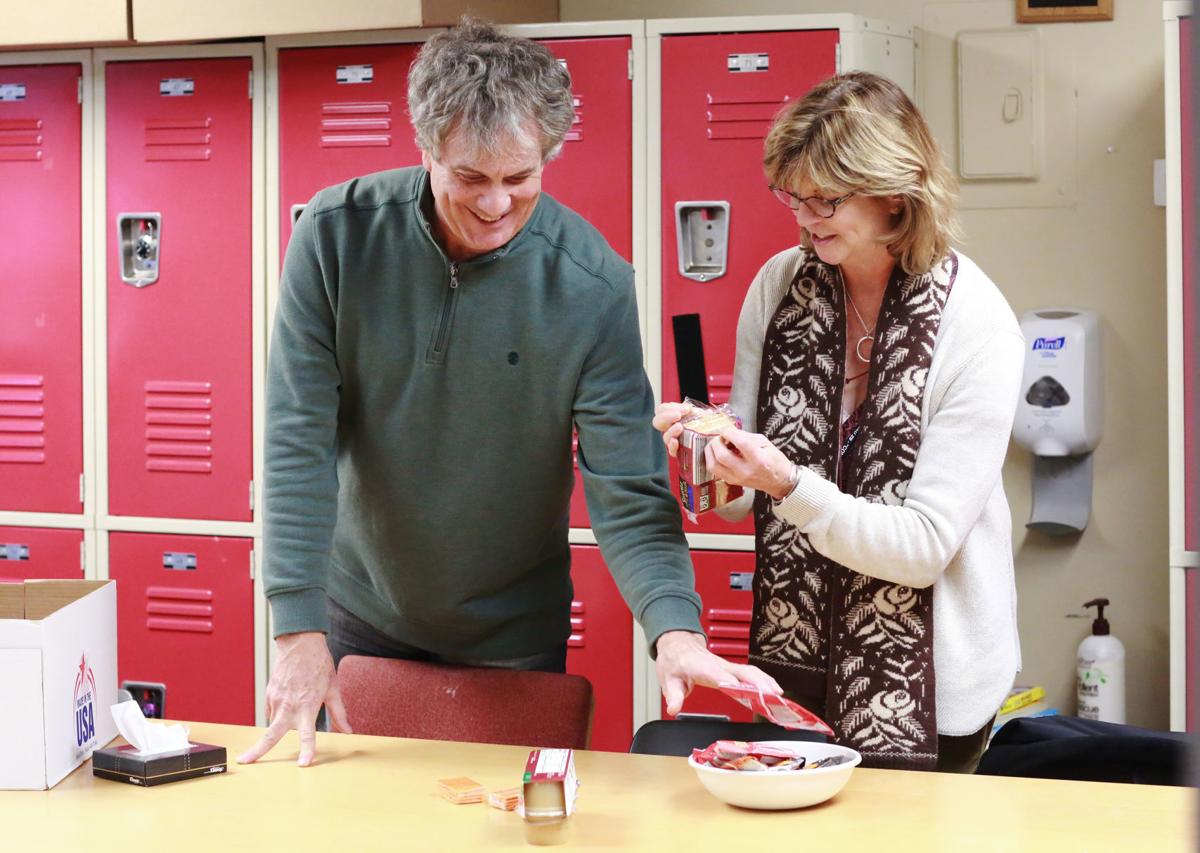 Chuck Mobilia and Teresa Starkey, volunteers at Hundred Nights in Keene, prepare snacks for those staying at the cold-weather shelter.

The beds, shown here, at Hundred Nights in Keene have been full or nearly full every night since the cold-weather shelter opened for the season in November.

Chuck Mobilia and Teresa Starkey, volunteers at Hundred Nights in Keene, prepare snacks for those staying at the cold-weather shelter.

It’s mid-January and homeless shelters in Keene are full of individuals and families looking to escape the cold, according to local advocates.

With a strain on resources and the cold weather not forecast to let up anytime soon, the same people are worried about the implications for the rest of winter.

The shelter opened its doors for the season Nov. 12, the earliest yet, and immediately 24 out of its 26 beds were filled, plus another for an overnight staffer.

Cambiar said the shelter has been at capacity nearly every night since. Some people have been turned away, she said, either at the door or over the phone.

Although December temperatures weren’t as low as they have been recently, she said, the rain and snow created dangerous conditions for anyone staying outside.

In addition to the 26 beds at the Lamson Street shelter, the United Church of Christ in Keene offers overflow space for up to 10 people. G. Sherman H. Morrison is chairman of the mission outreach and social action committee at the church. He said guests set up their cots in the church’s lower level dining hall, which has restrooms.

“The folks who stay with us tend to be ones who really appreciate having a less chaotic environment in which to get a warm night of sleep,” Morrison said.

This is the church’s fifth year participating as an overflow shelter, he said, but holiday events typically prevent it from offering the space before January. In past years the extra beds weren’t needed until later in the winter, but shelters have been at the brim all season.

United Church of Christ opened its overflow space Dec. 30, but Cambiar said the number of people seeking help at Hundred Nights in the interim began to take an emotional toll on the volunteers.

“They were panicking,” she said. “I mean they were honestly panicking, and having anxiety attacks, about people’s being safe, if they had to get turned away.”

Hundred Nights capacity is 26, based on a determination made by the Keene Fire Department, Cambiar said. But, when volunteers began emailing city staff and councilors, she reached out to officials about other alternatives.

The conclusion was that no more cots could go upstairs in the shelter because of the square-footage and the fire department’s capacity restriction for the space, she said. And while the resource center downstairs could potentially hold a few cots, it technically has a different address — 17 Lamson St., versus the shelter’s 15 Lamson St. — and would require its own lodging house license.

Cambiar said the organization reached a compromise with the city: The resource center could stay open overnight for people to come inside from the cold, but no one could sleep there. It wasn’t perfect, but she said it “was a whole lot better than worrying about them being outside all night.” And people found interesting ways to stay awake, she added.

“I mean, we had a woman down there who was making these beautiful bracelets and necklaces, and we had some guys who were, you know, doing drawing. There’s some definite artistic talent here,” Cambiar said, laughing.

Hundred Nights did that for three days before United Church of Christ opened its space Dec. 30, she said.

Cambiar believes at least part of this season’s apparent increase in people seeking shelter to the number of families experiencing homelessness.

Last week, Hundred Nights housed four families, who occupied the entire women’s side of the shelter.

“So, pretty much everybody who went to overflow was female, and we still had two who were on the couch, on a couch right next to the office,” Cambiar said.

Other area shelters have noticed a similar trend.

Robert Waters is an outreach specialist with Southwestern Community Services, and he said he’s gotten more calls from families seeking refuge than in previous years.

Southwestern Community Services operates two shelters, one for men and another for women and families. Waters said they’ve both been at capacity since about mid-October, so it makes some sense that Hundred Nights is also seeing an influx of people seeking shelter.

The cause of the increase is hard to pinpoint, but Waters guessed that it’s due in part to community efforts to lessen stigmas surrounding homelessness.

“People look at it and say, ‘I’m not homeless if I don’t go to a homeless shelter,’ or ‘I’m not gonna go there ‘cause it’s got all these bad people there,’ ” he said.

But he suggested that advocates’ efforts to change the public perception of people experiencing homelessness may have encouraged more people to seek help who need it. People who might have been couch-surfing prior to this winter might now feel comfortable with seeking out a shelter, he said.

“It just means that people are a little more open to approaching places like us and Hundred Nights and anywhere else that they can get services to try to quickly get rehoused or prevent homelessness altogether,” Waters said.

Some advocates, including Cambiar and representatives from the United Church of Christ, have expressed concern about finding shelter for everyone when the weather tends to turn colder in late winter. Typically, about eight or nine people live at campsites in Keene, Waters said, and they don’t usually come inside until there’s a couple feet of snow on the ground.

But Waters is confident in the state’s system for helping local communities find shelter during the cold. He said the N.H. Bureau of Homeless and Housing Services is proactive in terms of forecasting snowstorms and contacting shelters.

Cambiar said Hundred Nights will do its best to keep everyone warm, but there’s only so much the shelter can do with its limited space.

For nearly two years, the organization has actively sought a less costly building with room for more beds. But Hundred Nights has struggled to overcome a major obstacle: Operating a homeless shelter isn’t allowed in Keene’s central business district without a zoning variance, and getting one has proven difficult.

“We’re all still hopeful that we’ll be in a place that has all the beds in one location, ‘cause that would just make so much more sense, right?” Cambiar said. “With family rooms, so that we didn’t have to worry about anything. Everybody could have their own little space.”

The United Church of Christ lodging house license from the city allows for up to 16 people. Morrison said the church council feels comfortable sheltering 10 with its accommodations, and in the past, that’s been sufficient.

“But if the need is there, and all indications are that it might be, I would certainly go back to our church council,” he said, adding that he would hope the congregation would rise to the challenge.

And while he noted that his church is more than happy to serve the community in this role and help where it can, Morrison pointed out that homelessness needs to be addressed by a group effort that involves the public and the government. Tackling the causes of homelessness is a bigger project, he said, but there will always be a need for emergency sheltering, “and it seems like the city should be more involved in that.”

Morrison said he walks a fine line between providing the service because he believes it’s the right thing to do while also wondering why it’s needed.

“At some level it’s strange to me that we’re sleeping people in our dining room at our church,” he said. “... In what universe is this a solution to homelessness? It’s not. It’s a band-aid.”