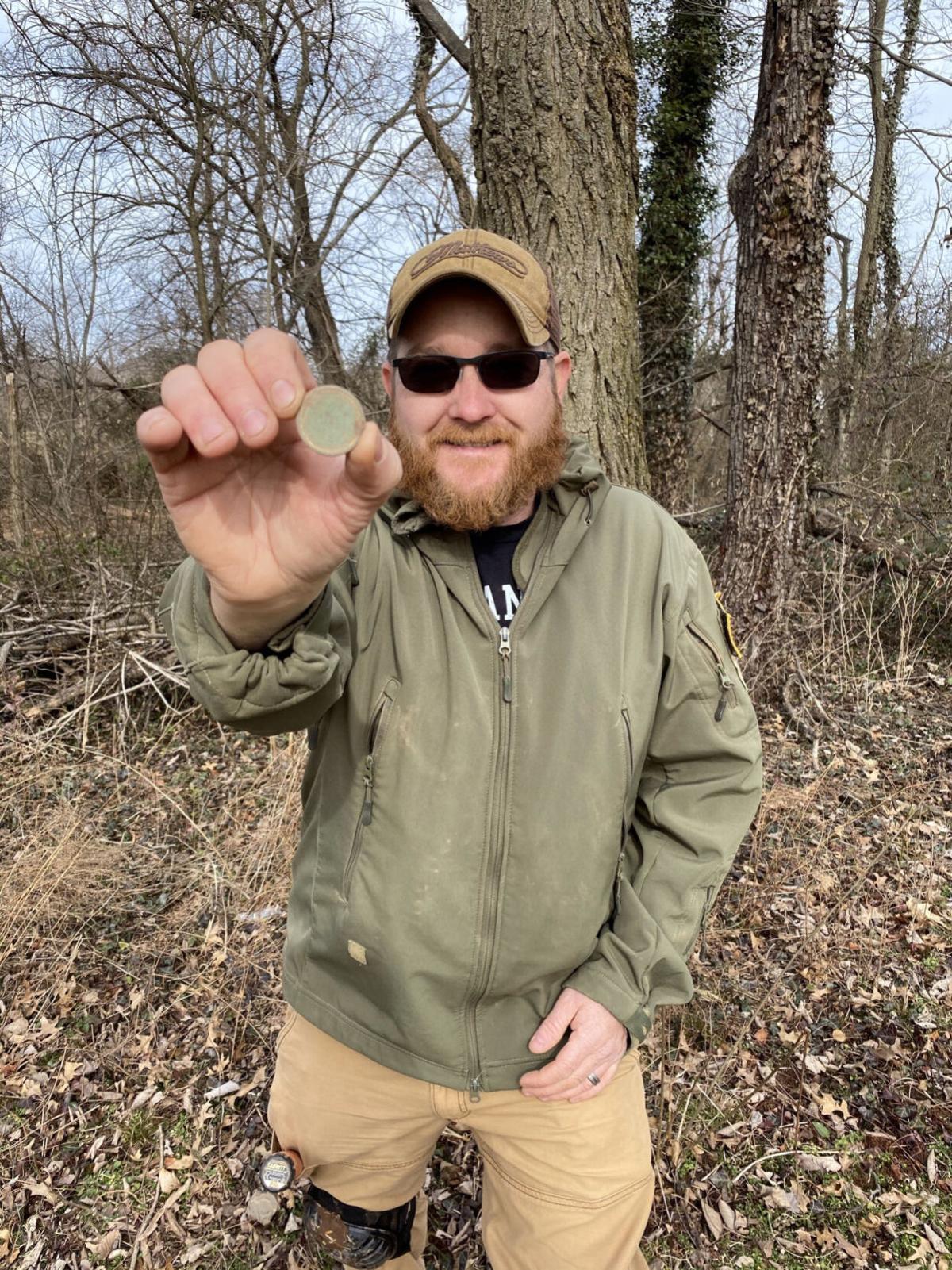 JP, a Civil War relic hunter, holds an identification tag belonging to Pvt. Francis Roark of Winchester, which he found in Maryland. 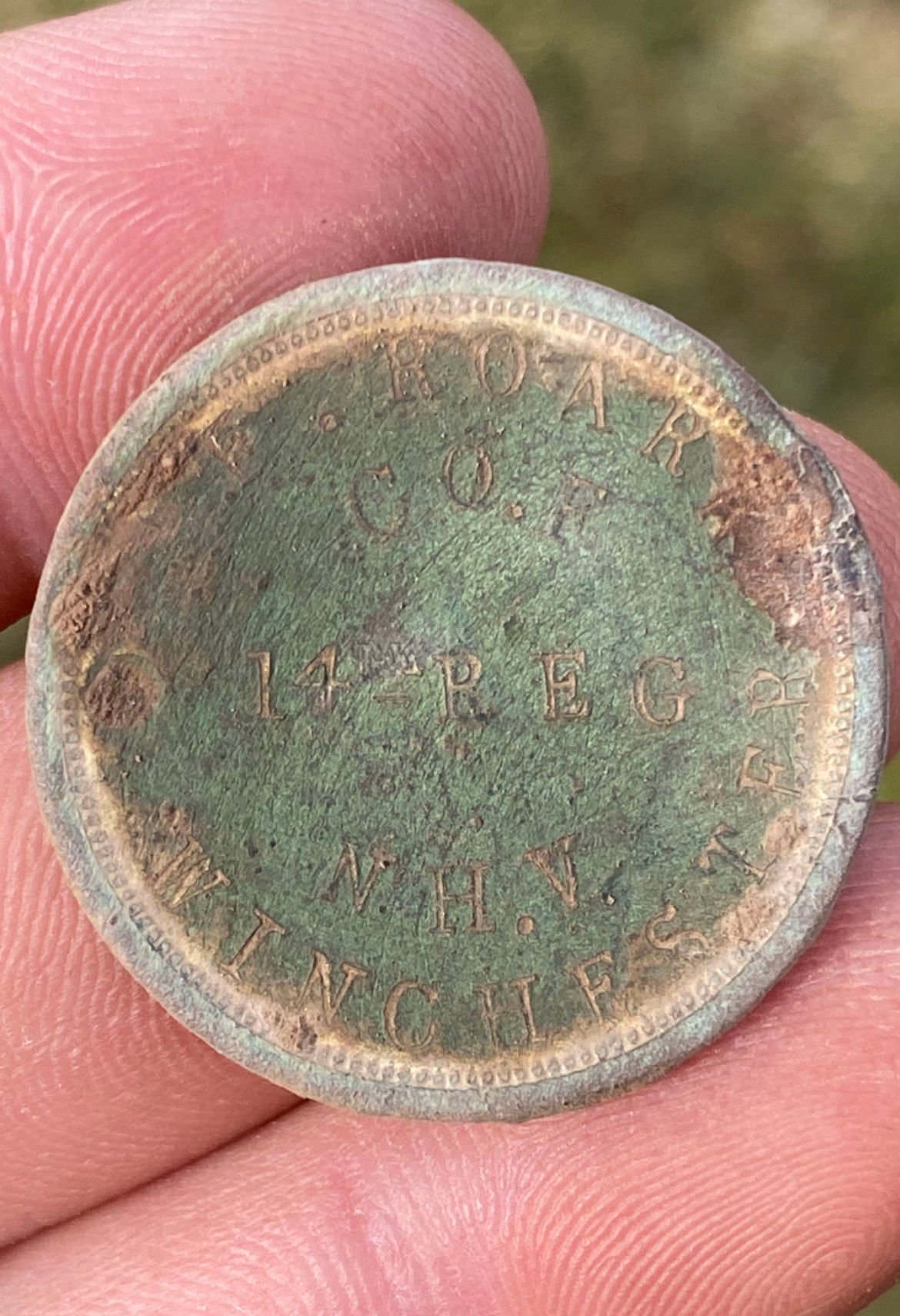 An identification tag belonging to Civil War Pvt. Francis Roark, of Winchester, was found earlier this year in Poolesville, Md. 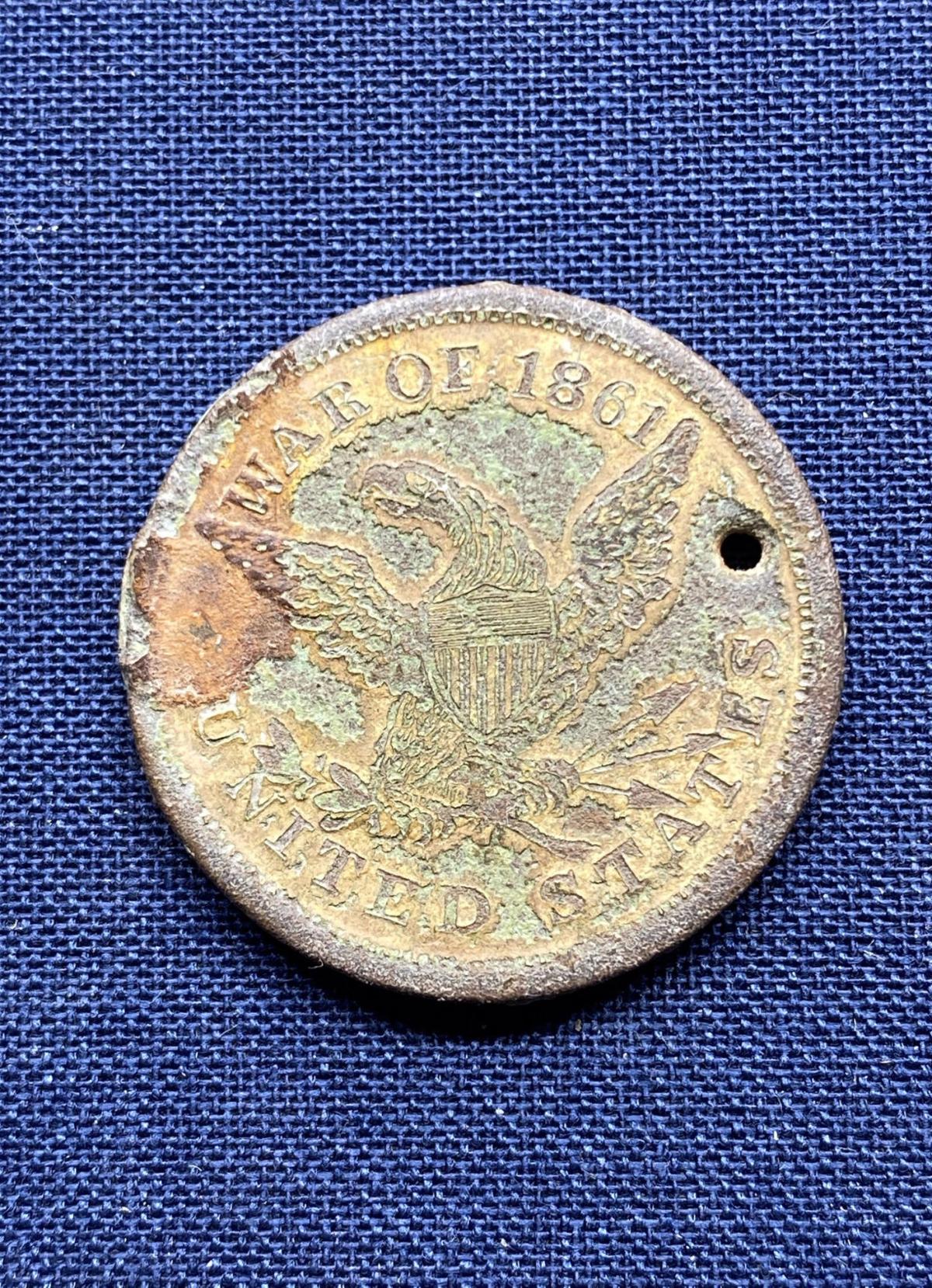 An identification tag belonging to Civil War Pvt. Francis Roark of Winchester was found earlier this year in Poolesville, Md. 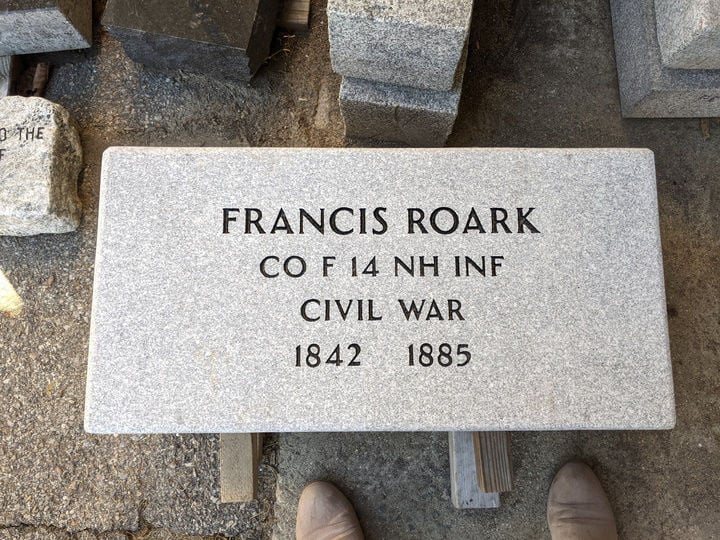 This commissioned marker for Civil War Pvt. Francis Roark, of Winchester, will be placed at his family gravesite at St. Joseph’s Cemetery in Keene next month. 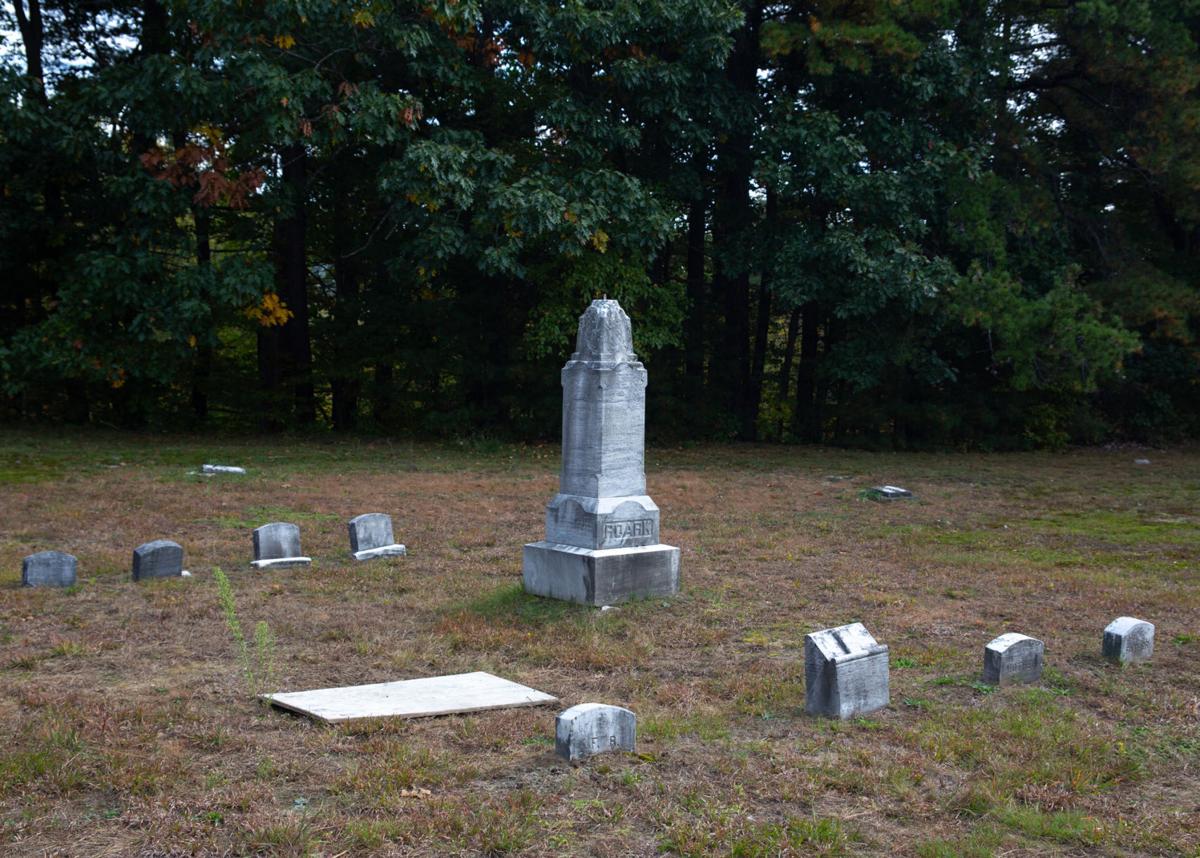 The Roark family plot at St. Joseph’s Cemetery on Route 12 in Keene, shown Friday. The plywood board at the site marks where a commissioned marker for Civil War Pvt. Francis Roark, of Winchester, will be laid Nov. 6. 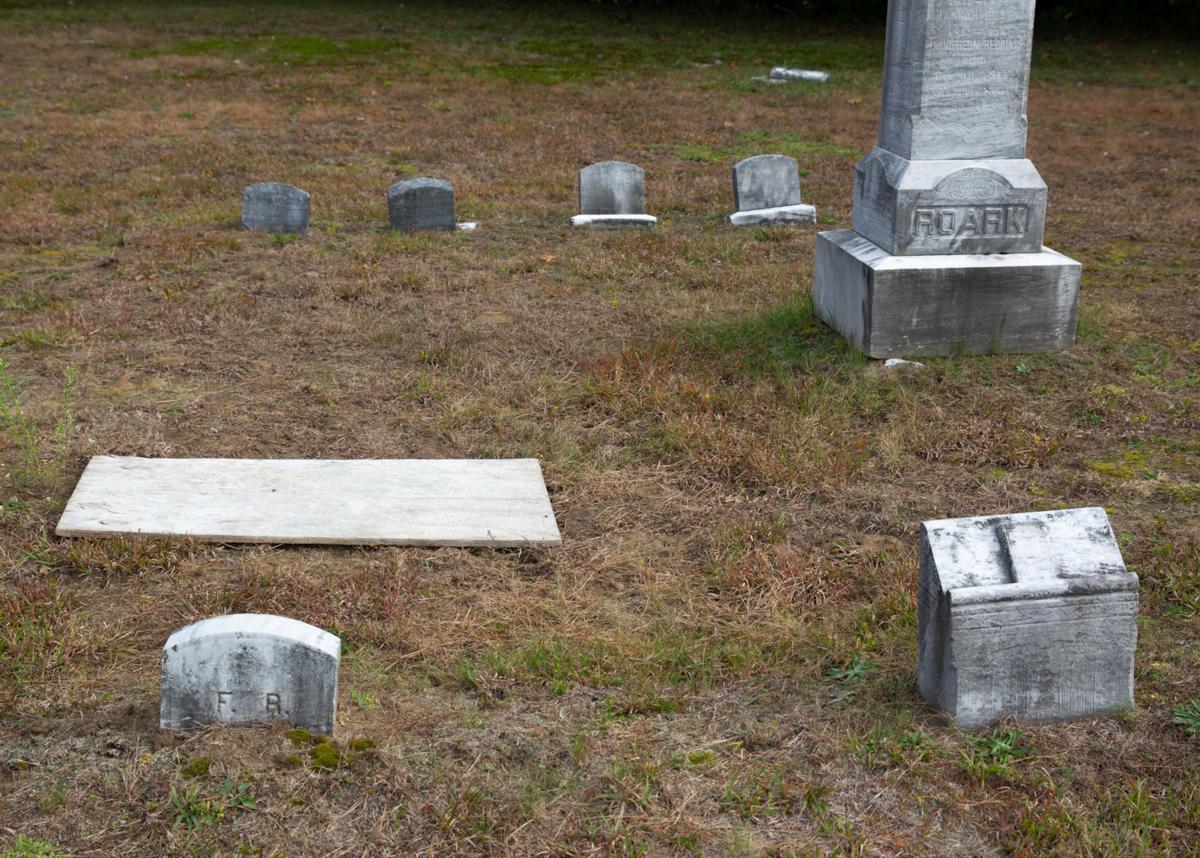 The Roark family plot at St. Joseph Cemetery on Route 12 in Keene, shown Friday. The plywood board at the site marks where a commissioned marker for Civil War Pvt. Francis Roark, of Winchester, will be laid Nov. 6.

JP, a Civil War relic hunter, holds an identification tag belonging to Pvt. Francis Roark of Winchester, which he found in Maryland.

An identification tag belonging to Civil War Pvt. Francis Roark, of Winchester, was found earlier this year in Poolesville, Md.

An identification tag belonging to Civil War Pvt. Francis Roark of Winchester was found earlier this year in Poolesville, Md.

This commissioned marker for Civil War Pvt. Francis Roark, of Winchester, will be placed at his family gravesite at St. Joseph’s Cemetery in Keene next month.

The Roark family plot at St. Joseph’s Cemetery on Route 12 in Keene, shown Friday. The plywood board at the site marks where a commissioned marker for Civil War Pvt. Francis Roark, of Winchester, will be laid Nov. 6.

The Roark family plot at St. Joseph Cemetery on Route 12 in Keene, shown Friday. The plywood board at the site marks where a commissioned marker for Civil War Pvt. Francis Roark, of Winchester, will be laid Nov. 6.

The Union Army was struggling to dispatch its Confederate foes on Aug. 13, 1862, when Winchester residents — heeding President Lincoln’s call for 300,000 more troops — gathered in Town Hall to raise a company for what became the 14th N.H. Infantry Regiment.

Francis H. Buffum, a Winchester resident who enlisted and chronicled the meeting, as well as the 14th Regiment’s later exploits, described a “martial enthusiasm” among the crowd that afternoon, despite the dangers they faced by joining up. The affair Buffum depicted is straight out of “Dead Poets Society.”

“The scene in the old town-hall, when man after man jumped upon the benches and signified his readiness to be one of the town’s quota, was one of the most thrilling ever witnessed in that community,” he wrote in an account owned by the Historical Society of Cheshire County.

Among the first to enlist was a 20-year-old mill worker named Francis Roark.

Born in Lowell, Mass., to Irish immigrants who then moved the family to Winchester, Roark joined nearly 1,000 men — many from the Monadnock Region — in the 14th Regiment’s initial ranks. Hardly the zealous patriots who had volunteered to quash the “Great Rebellion” a year earlier, those who enlisted in 1862 were farmers, blacksmiths, shoemakers and sailors drawn to the army’s generous cash bonuses, which could total several hundred dollars, according to Buffum.

Still, he wrote, the 14th Regiment was also motivated to keep the South from fracturing the country: “There was an awful majesty in the cool devotion and deliberate uprising of the volunteers in 1862.”

After mustering into service in Concord, Roark and the 14th Regiment went south by train Oct. 18, arriving in Washington, D.C., two days later. There, the Granite Staters participated in war drills at camps outside the city before settling in for winter in Poolesville, Md., Buffum wrote.

Meant to deter Confederate soldiers from crossing the Potomac River into Maryland, the Poolesville camp was home to 5,000 troops that year, including regiments from Massachusetts and Vermont, according to the Maryland Historical Trust.

Recent events suggest that while in Poolesville, Roark, who is scarcely mentioned in Buffum’s tome, lost a small identification tag bearing his name and regiment.

For more than a century and a half, the tag — like its owner — was a casualty of history. Until last February.

That’s when a Civil War relic hunter, who goes by the nickname “JP” for security reasons related to his day job, found the tag while on an expedition in Poolesville.

In the months since, JP, who lives in nearby Frederick County, has been on a mission to find out who Roark was and honor his military service. Those efforts will culminate next month in a ceremony at the Keene cemetery where Roark is buried.

JP said he initially thought the round, gilded item, which had largely turned green due to its patina, was an old coin or a button from a soldier’s uniform. But when he noticed an eagle, part of the Great Seal of the United States, and a “War of 1861” insignia on one side, he immediately recognized it as an identification tag.

“This is a relic hunter’s dream,” he told The Sentinel recently. “There’s not that many of these. They’re out there, but even in the state of Maryland, there hasn’t been a tremendous amount of them found.”

Explaining that his father, Michael, was passionate about Civil War history, JP said he became interested in the subject as an adult.

He bought a metal detector several years ago and joined two other relic hunters in the area to form a group called the Mason Dixon Diggers. After finding his first Civil War bullet in 2017, JP said he was hooked.

“It’s a passion that once you get the itch for, it’s hard to get away from,” he said. “Especially when you’re finding awesome relics and preserving them for future generations to enjoy. That’s what it boils down to.”

Relic hunting starts with a heavy amount of research: JP combs through old books and soldiers’ letters home for clues to where they spent time and may have left items behind.

The activity isn’t allowed on public lands, including many famous battlefields, so he knocks on doors nearby — often where there may have been a water source for the troops — to explain his quest and get permission to dig on their property.

“You definitely find a whole lot more trash than you do treasure,” he said with a laugh. “… But it’s a lot of fun. You find a lot of neat things, and you find a lot of things that you don’t know about until you do the research on it and discover what they are.”

The federal government didn’t start issuing dog tags until after the Civil War, so soldiers — concerned their bodies wouldn’t otherwise be identified if they died in battle — bought their own from civilian merchants, known as “sutlers,” who followed the troops.

Like many of them, Roark probably wore the metal tag around his neck, according to JP. Since the small hole in the disc is unbroken, JP guesses the chain or string around the Winchester resident’s neck broke, causing it to fall off.

“For him to lose that, without a doubt it was very troubling to him,” he said.

From Poolesville, the 14th Regiment spent much of the next year guarding Union Army posts and prisons in Washington and later a short time on patrol in Virginia’s Shenandoah Valley, Buffum wrote.

In spring 1864, the Granite Staters joined the Red River campaign in Louisiana, though they arrived too late to join the fighting and instead “enjoyed rare sport” in shooting at alligators.

Later that year, however, the 14th Regiment saw action on the front lines in Virginia, according to Buffum. At the Battle of Opequon (also known as the Third Battle of Winchester), the regiment suffered heavy losses — 53 soldiers, including seven from Roark’s company — but helped earn a key victory.

After fighting in two more battles, the 14th Regiment was stationed in Georgia until the end of the war. By late July 1865, Buffum reported that the soldiers had returned home.

“The Fourteenth passed into the history which it helped to make and glorify, and its component parts became simply citizens of that Republic which they had done their full part to make secure and free,” he wrote.

On July 12, 1874, he married Lawrence, Mass., native Mary Ann Doggett, 10 years his junior. The couple had a daughter, Elizabeth, the next year.

Roark, who the 1880 U.S. Census lists as working in a woolen mill, had returned to Ashuelot by 1882, according to military records published that year. He died of tuberculosis three years later at age 42.

Elizabeth died of the same disease in 1895, at age 20, records show, appearing to leave the family with no direct descendants. (Doggett lived until 1939, according to her headstone.)

That disappointed JP, who said he got chills when he saw Roark’s name and regiment on the identification tag.

“I knew I had to find out who this soldier was,” he said, adding that he hoped to connect with someone in the Roark family lineage.

JP used military records and other public documents, much of them published on the genealogy website Ancestry.com, to find out what Roark did for a living and where his regiment served in the war. With help from Keene municipal staff, who dug up a burial card for the Roark family, JP also identified a plot at St. Joseph’s Cemetery on Route 12 where Roark and many relatives, including his wife, are buried.

A tombstone at the site lists all their names — with one conspicuous absence.

“I was really upset and disturbed with the fact that his family plot had no recognition of him being a Civil War soldier,” he said. “… That really bothered me because I had a personal connection to this ID disc that I found.”

Earlier this year, JP asked the U.S. Department of Veterans Affairs to commission a headstone for Roark, providing his regimental records for proof of his service.

The stone will be laid at the family plot in a 10 a.m. ceremony Nov. 6 that JP has organized. The event will feature a 21-gun salute by a Civil War reenactment group in New Hampshire and a rendition of “Taps,” he said, with members of the N.H. Sons of Union Veterans expected to attend.

JP and his father, now 71, will also be there, making the ceremony especially meaningful, he said. Still, he deflected attention to Roark.

“It’s not about me or anybody else other than him and getting him recognized for something that he should’ve been recognized for over 150 years ago.”