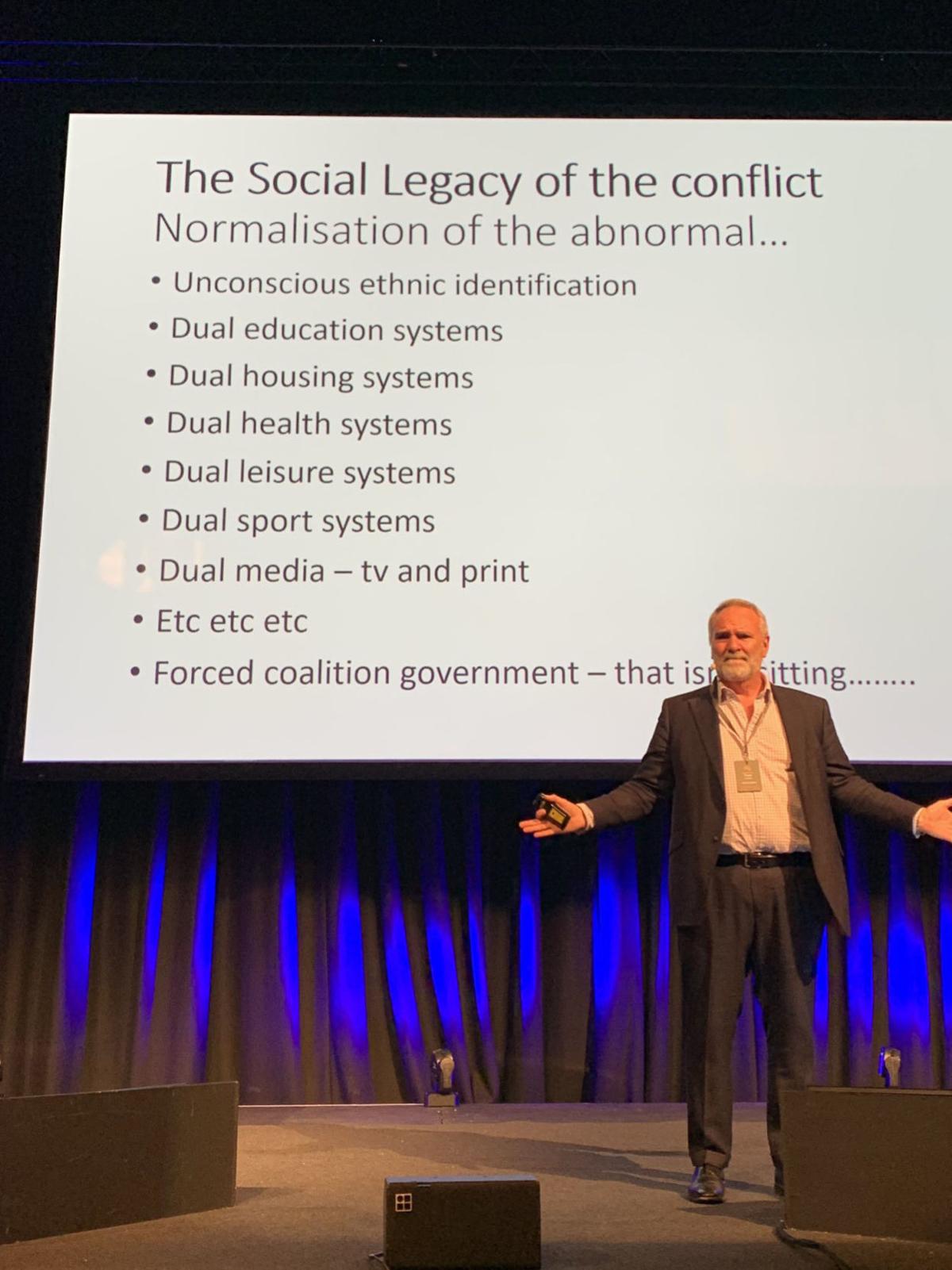 Growing up in a turbulent environment — in Northern Ireland during “The Troubles” — shaped Peter McBride, leading him to a career advocating for peace and reconciliation, and to study the effects that violence, including genocide and other atrocities, have on both individuals and the society in which they live. 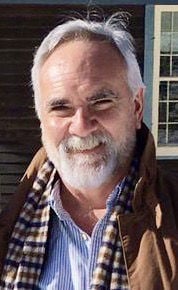 Peter McBride recalls that when he was a young boy, he’d watch by the window at his home after school. He’d wait anxiously for his father to return from work, worried perhaps something bad had happened to him.

He had reason to fret.

It was the early 1970s, and the locale was Downpatrick, Northern Ireland, about 20 miles south of Belfast. Civil war had broken out in the late 1960s between the Protestants and Catholics over whether or not Ulster would remain part of Great Britain, or merge into the Republic of Ireland. It was a long, bloody struggle that would last for three decades until it was officially ended with the Good Friday Agreement in 1998.

His father, James, an architectural draftsman, commuted to Belfast, and the young Peter feared the man would fall victim to the random killings and terrorism.

“In all, more than 3,000 people were killed in the conflict,” says McBride, 55, who will take over as the new director of the Cohen Center for Holocaust and Genocide Studies at Keene State College July 1. The center supports research and provides resources for teaching the subjects, as well as engaging in public outreach.

McBride says the number of casualties in Northern Ireland may pale when compared to the body count of other civil wars around the world, “but the killings were so indiscriminate and random. We lived with anxiety and insecurity, wondering where it would strike next, and to whom.”

It struck next for the young boy when two members of his Protestant church, both security officers with the British government, were gunned down by the Irish Republican Army. Then, a building just down the street from his home was blown up.

He explains that for him and his contemporaries, “The Troubles,” as the Irish call the conflict, was all they knew, permeating their young lives, traumatizing both individuals and the society as a whole.

Well before The Troubles, Catholics and Protestants lived in separate communities, each with their own churches, stores, newspapers, community organizations, sports teams, even television stations, he says. Enmity, suspicion and hatred brewed in this cauldron.

Then, the violence broke out, as British forces and paramilitary groups on both sides battled in the streets. Acts of terror were commonplace, and it was innocent civilians who suffered most, comprising more than half of all the casualties.

Growing up in such a turbulent environment shaped McBride in a significant way, leading him to a career advocating for peace and reconciliation, and to study the effects that violence, including genocide and other atrocities, have on both individuals and the society in which they live. He created a number of civil groups dedicated to reconciliation and worked as a mental health adviser to the first Northern Ireland Victims and Survivors Forum. He also has experience working in Rwanda, South Sudan, Malawi, Israel and Gaza.

From 2010 to 2019, he served as CEO of Inspire, an Irish mental-health organization.

In Rwanda, he provided training workshops in 2006 — 12 years after the genocide there — on the traumatic impact of the atrocity. “I was the mental health expert, seeking to provide support to faith communities to provide responses to their members facing mental health problems” as a result of what they’d endured.

And in January of this year, he was in Juba in South Sudan giving input for the U.S. Agency for International Development’s newly developed atrocity and genocide prevention training. The training must be provided to all field staff under the Elie Wiesel Act, which was signed into law by President Donald Trump in January in an effort to prevent genocide and other atrocities that threaten national and international security.

McBride holds three college degrees, a bachelor’s in biology from Liverpool John Moores University, a master’s in social work from Queen’s University Belfast and a divinity degree from the University of Aberdeen, Scotland.

“I was ordained as a minister in the Presbyterian Church in Ireland in the early 1990s,” he says. “I served as an assistant minister, but left it in 1994 because, particularly in Northern Ireland, working as a minister clearly identified me as on one side of the community, yet my sense of who I was, and how I wanted to be understood, was not constrained by these old religious and cultural identities.

“Also, in terms of my own faith journey,” he adds, “I had moved beyond what could reasonably have been considered orthodox within the Presbyterian Church in Ireland. I went immediately into studying my master’s in social work, and found that a much more authentic mechanism to express my desire to work within the community across all religious and cultural identities and serve society.”

Connecting with the Cohen Center

McBride had known about the work of the Cohen Center for some time.

“It is an interesting story of how it came to be with the Cohen Center,” he said in a phone interview this past week from his home in Ballynahinch, Northern Ireland.

“Three years ago, I met Dr. Jim Waller; he interviewed me as part of a study he was doing,” McBride explains. Waller in 2010 became the Cohen Endowed Chair of Holocaust and Genocide Studies at Keene State, having worked previously at the Auschwitz Institute for Peace and Reconciliation (later renamed the Auschwitz Institute for the Prevention of Genocide and Mass Atrocities).

Waller had asked McBride to lecture at the Auschwitz Institute, located in New York, and the two developed a professional relationship.

“He had seen my work and asked me if I was interested in interviewing for the job as head of the Cohen Center,” McBride says.

After McBride agreed to apply for the position, he had a series of telephone interviews, followed by a two-week visit to Keene in late January and into February, during which he was interviewed in person by college officials. He also delivered a guest lecture on campus outlining his vision for the center’s future.

McBride says the people he met in Keene could not have been more welcoming.

“I’m extremely excited to be heading up the center, although I see my role as part of a team, really, to understand these issues,” he says. “The Cohen Center already has all the building blocks, and is poised to have a much more impactful role in the coming years.”

McBride says the center can play a significant role in addressing what he sees as growing anti-Semitism in the world, and the rise again of fascism — the two ingredients that led to the Holocaust in the 1930s.

“I am passionate about this role because as I look around me, within living memory of the Second World War, I see the same sinister components that became the cornerstones of the Holocaust, being re-laid as foundations for the justification of modern atrocities and genocide,” McBride was quoted as saying in the news release that announced his hiring. “In response to this, I believe it is more important and compelling than ever to understand and remember the atrocities of the past, and to learn from them.”

The watchwords for the center’s work will be “compassion and understanding,” he says.

The Cohen Center for Holocaust and Genocide Studies has its roots in 1983, when Professor Charles Hildebrandt founded the Holocaust Resource Center. It was renamed the Cohen Center for Holocaust Studies in 2001 when Keene residents Jan and Rick Cohen underwrote significant portions of the center’s work in honor of Rick’s parents, Lester and Norma Cohen. In 2009, it was renamed again to reflect the center’s expanded mission to include the study of and work with genocide.

For the past year, the center has been led by Professor Emeritus Paul Vincent and Celia Rabinowitz, dean of the college’s Mason Library. Its former director, Hank Knight, retired in June.

Among the more high-profile events sponsored by the center are the annual Holocaust Memorial Lecture, in which international scholars, survivors and their families come together, and its Kristallnacht Commemoration, in remembrance of Nov. 9, 1938, when the Nazis torched synagogues, vandalized Jewish homes, schools and businesses, and killed more than a hundred Jews.

McBride, and his wife, Linda McMillan, look forward to their move to Keene in June, provided the current COVID-19 pandemic doesn’t get in the way of some of the logistics. One of their children — they have two sons — already lives in the U.S., in Brooklyn.

“We’re delighted with the prospect of moving to the States,” he says.

At a glance: Peter McBride