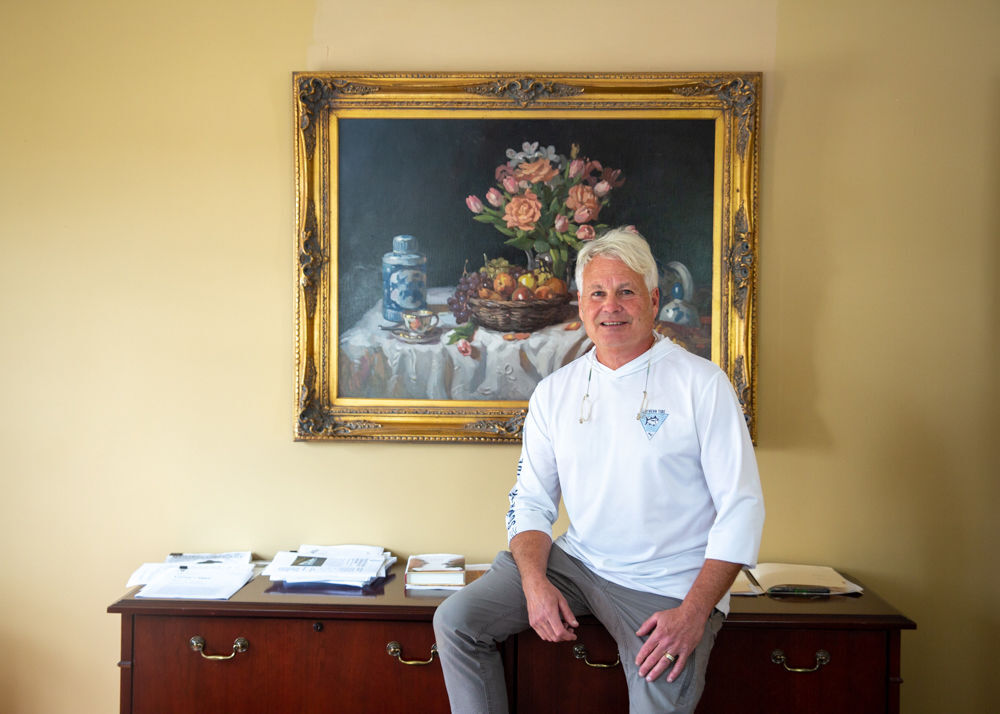 Charlie Donahue, shown at Donahue Law on Wednesday in Keene. 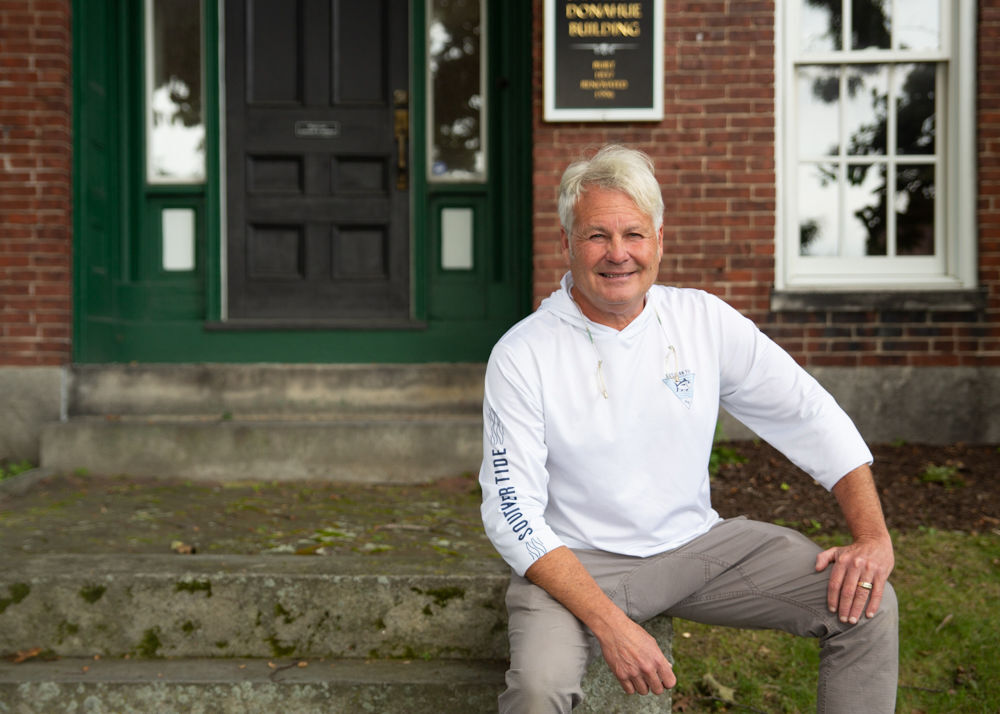 Charlie Donahue, shown outside Donahue Law on Wednesday in Keene.

Charlie Donahue, shown at Donahue Law on Wednesday in Keene.

Charlie Donahue, shown outside Donahue Law on Wednesday in Keene.

Charlie Donahue is a storyteller, and a good one, so fitting for one of the Monadnock Region’s best-known attorneys.

With a Boston accent that can chew through wood, a charming smile, hearty handshake and a shock of brilliant-white hair, it’s not difficult to imagine the 63-year-old Chesterfield resident capturing and keeping the attention of a client, judge or jury.

He was built for talking and persuading.

Ironically, though, he says that as a young boy he was very shy. At St. Margaret’s School in his native Lowell, Mass., the nuns “intimidated and petrified” him, and as a result he was a poor student with no confidence.

It wasn’t until 7th grade — away from the nuns — when he attended the public Daley Junior High in Lowell that he started to blossom.

“I knew I wanted to be a lawyer ever since I was in the 6th grade,” he says. “There wasn’t anything noble about it, I didn’t want to make the world a better place or anything like that, but we knew some lawyers, and I looked up to them and realized they made a pretty good living.”

These attorneys he and his family knew were what are called “street lawyers,” those who work for large law firms handling corporations and big business, and who conventionally make quite hefty salaries.

At Lowell High School, his confidence grew even more: “I was put in the ‘C’ class, standing for college bound.” In the advanced-placement history classes, he found himself rubbing shoulders with the school’s highest academic achievers, many of them headed for the Ivy Leagues. He found he could more than hold his own with them.

He earned a scholarship to Marquette University, a Catholic Jesuit institution in Milwaukee, and the move fit comfortably into his wish to see another part of the country.

After graduating from Marquette, he earned a degree from Syracuse University College of Law. He met his future wife, Susan, there, and the couple would eventually have four children, two sons and two daughters.

Fresh out of law school and having passed the bar exam, he began searching for a job.

He hit a brick wall.

“I interviewed everywhere, and I got rejected everywhere. These were big firms in Boston, Chicago, New York. The problem was the partners were asking for my law experience — things like had I clerked for a judge or other things like that. All I’d done was work as a security guard and was a houseboy for a sorority house. I got 300 rejection letters, and I’ve saved all of them,” he says, laughing.

Naturally, he was depressed by the relentless turndowns, discouraged that nobody appeared to want him.

“I didn’t realize, as I did later, to be thankful for the rejections in my life,” he says.

Then, a law firm in the Elm City agreed to interview him. That was in 1983.

“I drove to Keene, and on the way, I wondered what the hell was I doing here? Out in the sticks like this?”

On his way into town, he got lost and ended up at a pay phone at Dunkin’ Donuts on West Street.

“I thought to myself that I could blow this whole thing off, just not show up for the interview,” he recalls. “I was very close to doing that, but I called them from the pay phone and said I was lost and asked for directions. That decision changed my life.”

“I spent one year there, maybe not even a year, then I was given another gift — I lost my job. I was fired. I wasn’t a very good associate.”

He says he was a misfit with the law firm. “I realized I was more a lone ranger, a lone wolf.”

Also, he discovered that many of the routine tasks lawyers do were not to his liking, nor was he very good at them.

“Title searches? This wasn’t what I wanted to do anyway. I was very aggressive, and I thought in terms of money,” he says. “I wanted to do criminal defense.”

But he was now jobless, in a town he hardly knew, and looked “only about 19 years old.”

He wasn’t about to give up, though, that wouldn’t have been in his character, he says.

His wife was working at the Sears store on Central Square, selling appliances. “She was good at it, too; she was making more money than me.

“I didn’t have an office,” he explains. “We had one car, a Ford Mustang, which my wife owned. And that’s where I started my law firm, from out of that car.”

Fortunately, a handful of his clients from the other firm chose to follow him.

It was the best move he ever made, he says, hanging his own shingle, even if it was from an automobile.

“It was a huge success; in the first year on my own, I was making six times as much” as with his old employer.

It was an uphill struggle, however, to break into the local legal community in the early 1980s, which he describes as a “closed shop” of stodgy, tradition-bound attorneys and judges.

“All these guys were in bed with one another. I was different,” he says. “I started advertising, and that was a big no-no. Some of the lawyers were nice to me, but others bad-mouthed me.”

He based his practice on criminal defense and personal-injury cases.

“You find out what you’re good at,” he says, and for him, it was dealing with people and litigating cases in front of prosecutors, judges and juries. He learned he was adept at so-called “right brain” skills — intuition and the ability to relate to people. People with “left-brain” attributes, according to researchers, tend to be more analytical and methodical.

“The personal-injury cases fell into my lap. I learned quickly that you got to develop a niche. I didn’t want to be bogged down with stuff I wasn’t good at.”

Donahue says his clientele tended to be working-class people unfamiliar with the law, or who felt intimidated by lawyers, who they stereotyped — rightly or wrongly, he says — as either snobs or shysters.

“Back then, people were afraid of lawyers. Everyday, hard-working people didn’t trust them,” he says. “My gift was I was never like that. I’m more comfortable being at Kimball’s having a milkshake than being at a cocktail party, where I’m bound to say the wrong thing.”

He also felt that law school didn’t prepare him for the kind of law he practiced.

“The legal education system is so detrimental to being a good attorney,” he says. “It’s all theoretical; too many law professors never sat down with a woman who just lost her husband. They never dealt with real people.”

Donahue got a bit of a reputation as a free-wheeling lawyer with a tendency to be a rabble-rouser. He created quite a local stir, and generated national publicity a couple of decades ago when city zoning officials wouldn’t let him hire more employees at his then-office building on Court Street, saying it didn’t adhere to regulations. Donahue said at the time that he “got his Irish up” and felt that was wrong. He discovered that the zoning laws didn’t restrict him starting a non-commercial farm on the property, so as a stunt placed chickens, roosters, hens, geese and a Guinea hen on his front yard. People came from all around the region to see the sight, and the city relented.

“I loved all the self-promotion,” he says of his long-time advertising campaigns, and he continues to maintain billboards in the area with his face prominently displayed. “I can’t get it out of my blood.”

He worked hard, he says, and the financial rewards came, usually in commissions earned from personal-injury lawsuits. The days of working out of a car were way in the past, and he moved from Court Street and purchased an old building on West Street that had once been owned by the Colony family, early industrialists in the development of Keene. He restored that building and, coincidentally, it’s only a block and a half from where that pay phone was where he made the call that landed him his first job.

By his early 50s, the firm was doing very well, but he felt a void in his career. He wanted more out of it, and not just in financial rewards.

In 2012, he enrolled in a three-week certificate program at the Trial Lawyers College operated by Gerry Spence, a nationally-known trial attorney, at the man’s ranch in Wyoming. Spence, best known for his successful role in securing a settlement in the Karen Silkwood case, had in his working career never lost a criminal case as either a prosecutor or a defense attorney, and hadn’t lost a civil case since 1969.

“I was 54 years old, and I was with 50 other trial lawyers from all over the United States, a highly diverse crowd. It was intense. It was a life-changing experience.”

The college is a post-graduate boot camp for trial lawyers, immersing them in courses where they hone their skills in litigation and courtroom strategies, Donahue says, as well as reflecting about career goals with peers in the profession.

He recalls his own time with Spence.

“He asked me, ‘How do you think your re-entry will be,’ ” he says, with Spence referring to how Donahue would feel about going back to his own practice after the three-week retreat.

“I told him it would be interesting, but he told me no, it’s going to be painful, because that’s the only way we change.”

“For the first time in my life, I learned how to listen,” he says. “I became more empathetic, more understanding, trying to step into the hide of everyone I was dealing with. I’m much more open to everyone. I realize that everyone is struggling with something that explains why they’re behaving the way they are.”

He eagerly looks forward to a long future as an attorney.

“I want to keep doing this; I know I’m getting better,” he says.

Also, in all his cases now, he brings in other lawyers as consultants, drawn from the pool of those attorneys he knows from the Spence retreat. “There isn’t a case where I don’t bring in muscle; it’s a team effort.” Conversely, he’s brought in as counsel on cases litigated by other Spence alumni.

But despite his success, Donahue feels it can all change in an instant.

“There’s always the Potato Famine in me because I’m Irish; it’s the fatalistic streak,” he says, referring to the tragedy that abruptly devastated the Emerald Isle in the 1840s.

As for what he would tell the young man who placed that call at Dunkin’ Donuts so many years before, Donahue looks up at the ceiling, thinking.

“Adjust to the curve balls life throws at you. Be strong. And, be kind.”

At a glance: Charlie Donahue