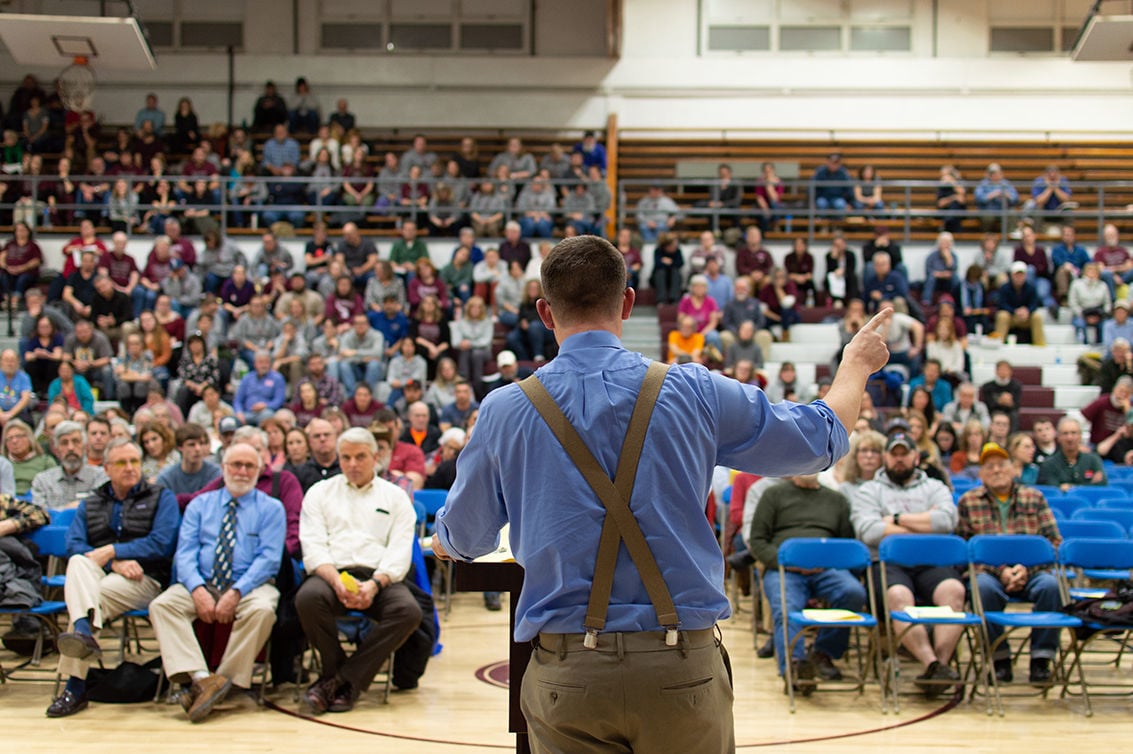 At Wednesday night's deliberative session, school board Chairman Michael Herrington, a Charlestown resident, delivers a speech digging at what he feels is the real reason why residents in his town want to withdraw from the Fall Mountain Regional School District. 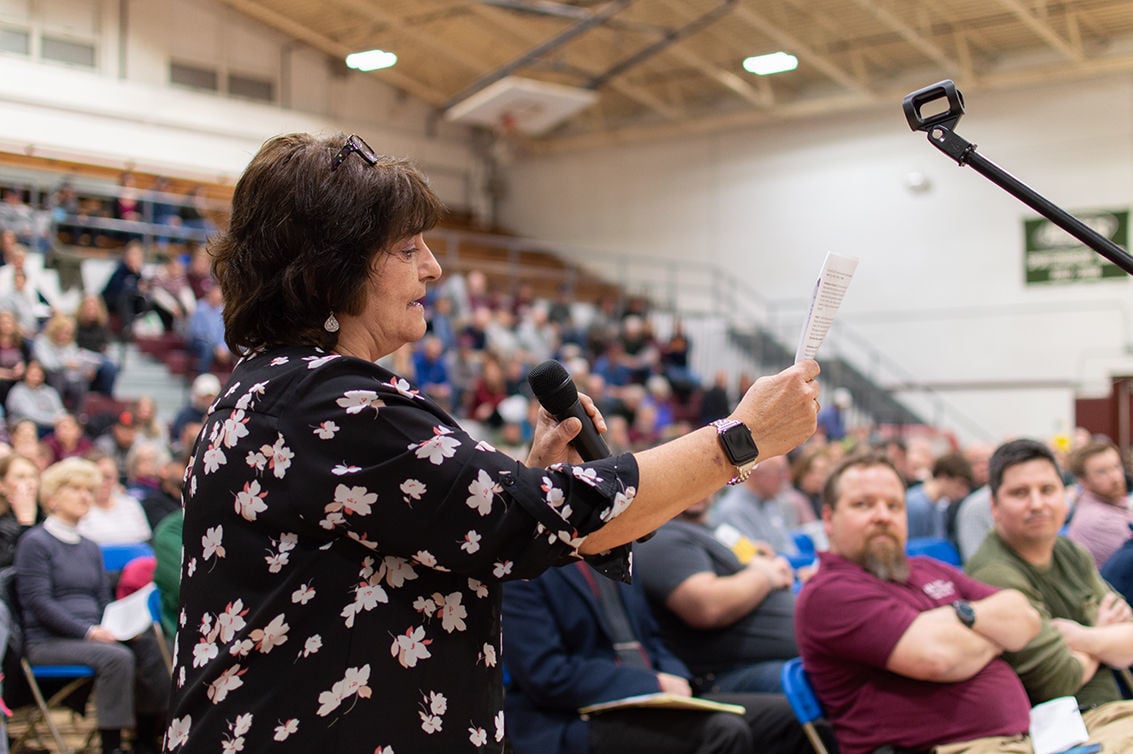 At Wednesday night's deliberative session, school board Chairman Michael Herrington, a Charlestown resident, delivers a speech digging at what he feels is the real reason why residents in his town want to withdraw from the Fall Mountain Regional School District.

LANGDON — At times during Wednesday’s school district deliberative session, the gym at Fall Mountain Regional High School seemed like an appropriate setting, filled with the exuberance of a sporting event complete with cheers from the bleachers.

But along with the typical dollars-and-cents discussions of these meetings, there were allusions to lofty ideals of truth and principle, contentious disagreements, and mumbling in the crowd about “these Charlestown people.”

With Charlestown’s proposed withdrawal from the Fall Mountain Regional School District on the table this year, the deliberative session was about far more than the individual articles on the warrant.

Impassioned speeches about unity also conveyed an underlying “us-versus-them” tone, and the divisions were clear in the crowd, with voters in favor of Charlestown leaving the district gathered mostly together in chairs on the court, arms crossed and brows furrowed.

In the highest section of the bleachers were rows of maroon and gray — voters decked out in Wildcats garb, whooping and hollering after any anti-withdrawal remark at the microphones.

As the meeting began, district Moderator Leroy Watson donned a bright orange safety vest, which he said later was a lighthearted gesture to acknowledge everything in the air — without disrespecting the meeting process, of course.

Speaking to the warrant article that would approve Charlestown’s departure were representatives from the majority and minority of the withdrawal study committee, which recommended the town's departure from the district by a 7-3 vote in October and submitted its final state-approved plan last month.

For decades prior to the study’s commission, the crux of the debate has been Charlestown’s lower property values and median household income compared to the other four towns, fueled by its higher proportion of mobile homes, which bring in less tax revenue than houses and commercial units.

About 41 percent of the high school’s students are from Charlestown, which has the highest school tax rate of the member towns by a long shot. According to the district’s budget summary, Charlestown’s estimated school tax rate for next year is $20.17 per $1,000 of assessed value, with the next highest being Langdon at $15.55.

Charlestown Selectman Albert St. Pierre spoke on behalf of the study panel’s majority, but didn’t elaborate on the group’s findings aside from explaining how the committee functioned and directing people to the majority report available online.

By contrast, school board members Bill Stahl of Walpole and Vice Chairwoman Mary Henry of Langdon gave scathing reviews of the majority’s report. Calling the withdrawal plan vague, Stahl alleged that, in his conversations, not one school administrator in the district supports it.

Then school board Chairman Michael Herrington stepped up to the podium.

Herrington’s voice carried the weight of a church sermon as he, a Charlestown resident, explained his understanding of his town’s relationship with the district. A gym full of 300 people was silent while he said he voted for the withdrawal study last year as a way to get to the truth. But, he alleged, that wasn’t the goal of the study committee. He laid out the reasons why voters should reject the measure allowing Charlestown to leave the district.

To supporters who say the withdrawal is about money, Herrington argued, the plan calls for Charlestown voters to pay more in taxes to educate their kids. To those who say it’s about local control, he noted students would be tuitioned into the district’s high school, giving Charlestown less power than it currently has.

And if it’s not about money or local control, he asserted, then it has to be a general feeling of dissatisfaction that’s built up over the past 40 years: “It’s about ‘I’m angry and I’m done.’

“So if you’re angry and you’re done, vote to withdraw. As far as I can see, that’s the only reasonable and rational reason to vote for this,” he said. “But don’t lie about it. Don’t hide behind numbers, don’t hide behind facts that may or may not be true. Just say it.”

But the result, he said, would be layoffs across the district and an exodus of Charlestown teachers into other schools. The minority report by the study committee proposes staff and transportation cuts to help cover the cost to the remaining towns of Charlestown’s departure.

Herrington also claimed there was a predetermined outcome by the withdrawal committee.

“So what ends up here is the process was never intended to get truth. The process is fueled, in my personal opinion, by 40 years of anger, of distrust, fueled by a game of telephone between five towns …” he said. “I’m gonna tell you, it is not unlike my kitchen table around Thanksgiving.”

There’s been a breakdown in communication, he said, and as an olive branch, he apologized to St. Pierre for “putting you on the spot” at a meeting.

He then turned to the school board: “We need to do better.”

There was a standing ovation at the end of Herrington’s speech — but almost exclusively by the maroon-clad voters in the bleachers and a few loners in the front. A section of pro-withdrawal Charlestown voters delineated itself by neither standing nor clapping, just sitting after being publicly scolded in front of the rest of the class.

There were far more remarks made against withdrawal than for it, but Charlestown voters had their say on a spending measure.

Several articles, open only to voters in each of the district’s towns, seek to use one-time state funding to make capital improvements to schools.

Charlestown voters have two such articles to consider: one that would use $171,000 for security upgrades and asbestos abatement; another asking for $645,000 to build double-door entrances at the town’s three schools.

Jeremy Wood of Charlestown proposed amending both to zero, asserting that the district should instead go after state grants for the projects and let the one-time funding offset residents’ taxes.

James Fenn, the district’s chief financial officer, explained that the U.S. Department of Homeland Security offers safety recommendations and has suggested these changes for all Fall Mountain facilities, but Charlestown was the only town that received enough money from the state to cover it so soon.

Originally, Fenn said, the security upgrades and the new doors were presented as one article, but they were split in two in response to the budget hearing in January. The $171,000 is comparable to what’s being proposed for the other four towns, he said. Breaking out the higher price tag allowed voters to choose if they wanted to use the money for the door installations or apply it as revenue, which would give the equivalent of a $2.30 reduction in the school portion of the town’s tax rate.

Some voters expressed frustration over the presentation of the articles on the warrant, though, which called the measures “tax-neutral.” Patty Chaffee of Charlestown pointed out that, if approving or denying the article would move the town’s tax rate up or down, it doesn’t sound neutral. Other residents noted that this was the only article that specified on the warrant that there would be a tax impact.

The remaining articles remained unchanged, despite some attempts at amendments.

Other town-specific articles also seek to use a combination of one-time state funding and capital reserve accounts for security upgrades: $35,500 for Acworth Elementary School; $109,500 for Alstead Primary and Vilas Middle schools; $8,500 for Sarah Porter School in Langdon; and $162,500 for Walpole Primary, Walpole Elementary and North Walpole schools.

Aside from a detailed explanation by the school board and administration, there was little discussion on the district’s proposed operating budget of $32,428,708, which is $1,203,908, or 3.86 percent, higher than the figure voters OK’d last year.

Operating budget comparisons do not represent the change in the amount that would need to be raised by taxes, which is also affected by spending requests in separate warrant articles and year-to-year changes in revenue.

The district will be asked to use $156,500 from a capital reserve fund for improvements to the high school, including a replacement outdoor scoreboard and getting restrooms in compliance with the Americans with Disabilities Act. Another article would move up to $500,000 from any surplus at the end of the year into a series of capital reserve accounts.

Another article would allow the school board to negotiate a land transfer to the town of Walpole, which already uses and maintains the district-owned parcel on Main Street next to the recreation area for parking.

Voters go to the polls March 10.

Editor's note: This article has been altered to remove errors made in editing pertaining to the residencies of people sitting in the bleachers and the chairs on the gym floor.

This article has also been altered to correct a reference to the withdrawal committee's vote in October, which was incorrect due to a reporting error.