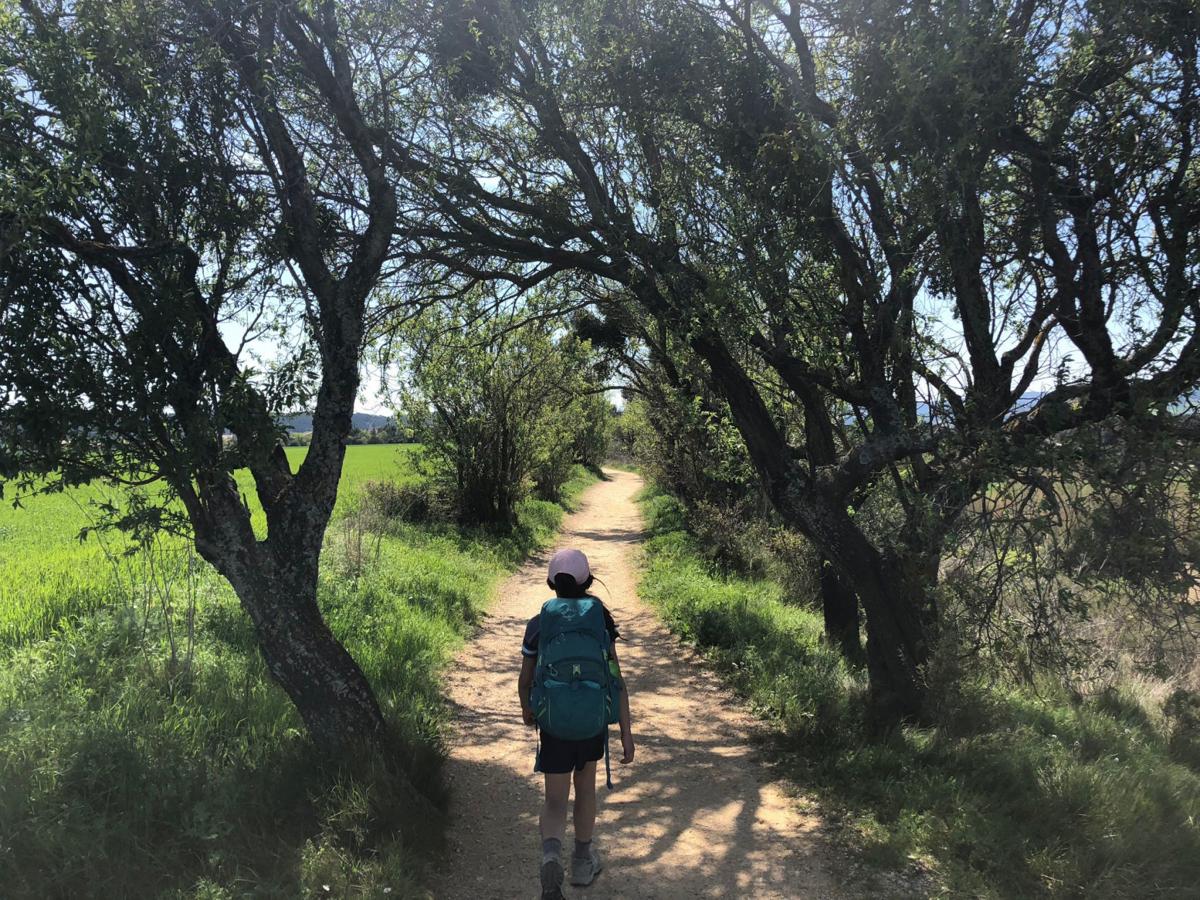 Bayan Gamboa, 9, walks along the Camino de Santiago in France. 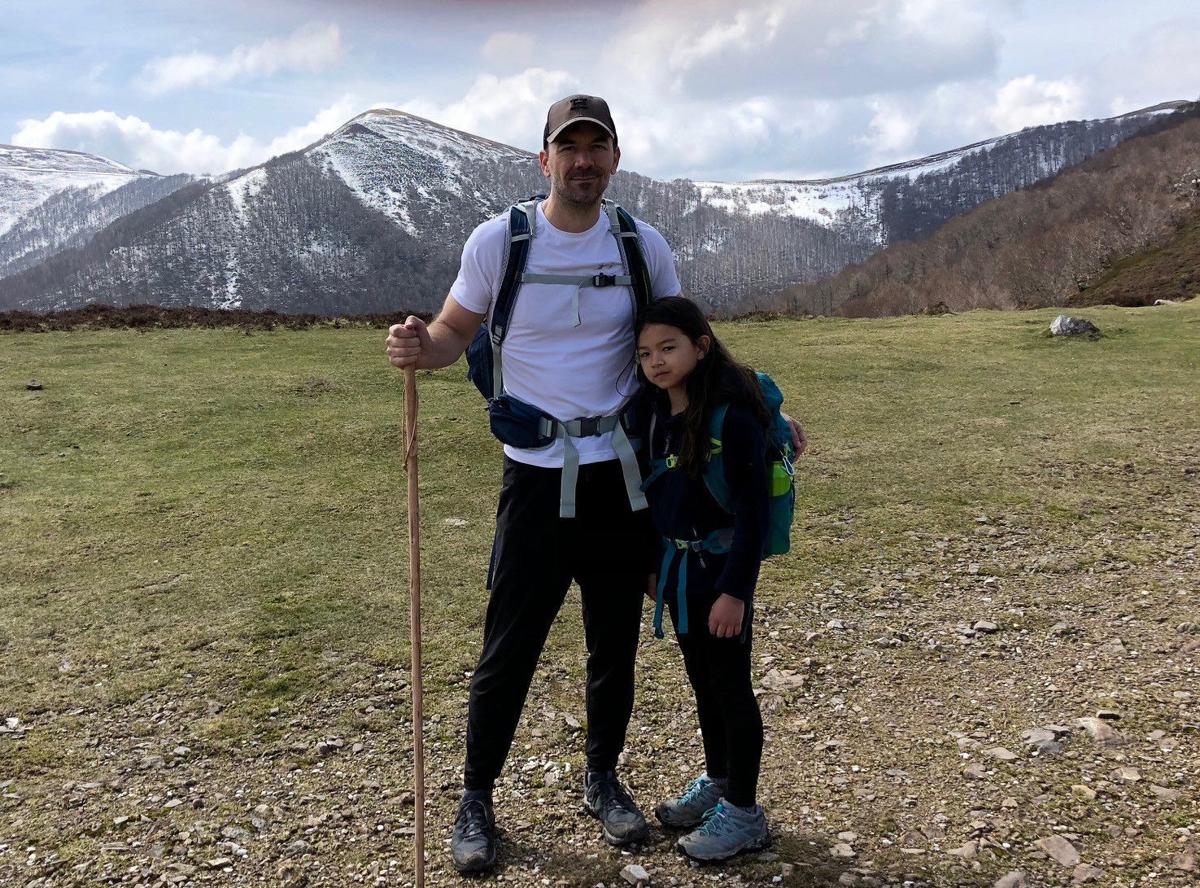 Brett Gamboa and his 9-year-old daughter, Bayan, are walking the Camino de Santiago trail, which ends in northwestern Spain. 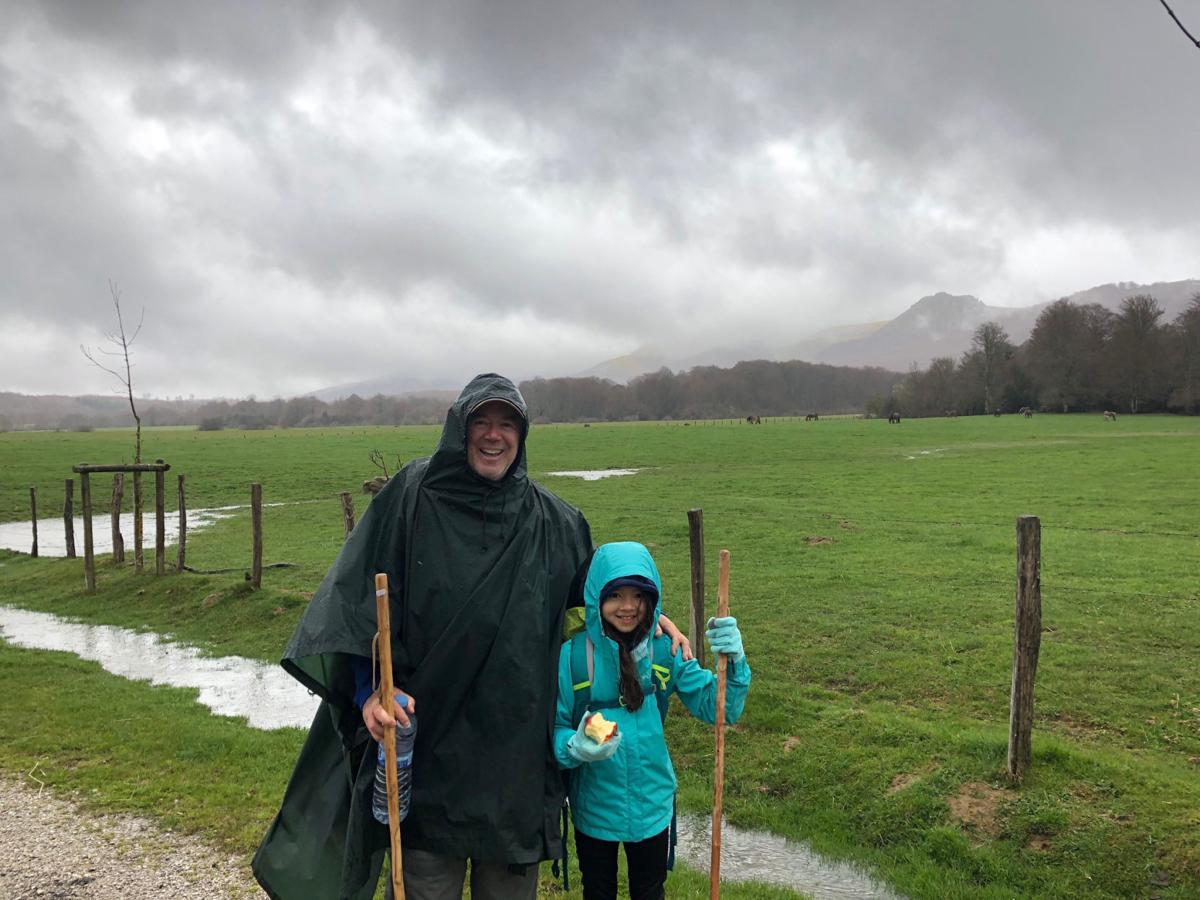 Tom Gamboa joined his son, Brett, and 9-year-old granddaughter, Bayan, right, for the first part of the Camino de Santiago pilgrimage. Tom has made the trek before.

Bayan Gamboa, 9, walks along the Camino de Santiago in France.

Brett Gamboa and his 9-year-old daughter, Bayan, are walking the Camino de Santiago trail, which ends in northwestern Spain.

Tom Gamboa joined his son, Brett, and 9-year-old granddaughter, Bayan, right, for the first part of the Camino de Santiago pilgrimage. Tom has made the trek before.

At its core, this spiritual journey is about family, generations interlocking for 500 miles on one of the world’s most revered walks. The Camino de Santiago trail in Spain offers the gifts of time, space, beauty and relevance — of introspection — a pilgrimage that brings together many who are at a crossroads in life.

And those who are at peace with it.

“You get on the trail and there’s a rhythm and a simplicity of life,” says Brett Gamboa of Keene, a Shakespeare scholar and assistant professor of English at Dartmouth College. “Everything you need is on your back. It’s about contemplation, reflection. There’s something really beautiful about a life lived that way.”

Gamboa, 46, spoke Wednesday evening from Leon, Spain, his 9-year-old daughter, Bayan, alongside him. This week the pair passed the halfway point of their approximately month-long hike from St. Jean Pied-du-Port, on the French border, along Camino de Santiago, also known as The Way of St. James. His wife, Dr. Gladys Lee, is home with their younger daughter, Parisa, a kindergartener at Franklin Elementary School not yet ready for the excursion. They will meet Brett and Bayan in a couple of weeks in Santiago de Compostela, in the northwest corner of Spain.

The Camino Trail was immortalized in a 2010 movie, “The Way,” starring Martin Sheen. He plays Dr. Thomas Avery, an ophthalmologist from the U.S. seeking solace after his son is caught in a storm and dies on the trail in the Pyrenees. He decides to walk it himself, carrying his son’s ashes, and the film chronicles his journey. Like the movie’s central figure, Lee, a native of Taiwan, is an ophthalmologist, at Monadnock Community Hospital in Peterborough.

Brett and Bayan didn’t intend to walk the entire trail, only a couple hundred miles. The family arranged for Bayan to miss some class time at Franklin, where she is in 3rd grade. Their time on the trail has been so meaningful they decided to hike the entire route, despite some challenging logistics. With the help and support of Principal Erik Kress, they officially withdrew Bayan from school and into a homeschool program so truancy wouldn’t be an issue.

Bayan has flourished from day one. “We’re just dead, kind of limping around, administering to our blisters,” Brett says of the first couple of nights in the Pyrenees. “Bayan is running around and people are joking the last thing they want to do is run. … This little kid is proving she is immensely capable and duly inspiring. We just decided it was too good a thing and she was too involved in it to cut her out of it.”

Bayan says spending time with her dad and grandfather, and making friends with people from around the world, have been the highlights. “I really like being here; it’s really beautiful,” she says. “On hills, it’s especially quiet, there’s green as far as you can see and the sky is perfectly blue and it’s just so peaceful.”

“The earth has music for those who listen”

The Gamboa family hiked the first half of the trail not as a duo but a trio: daughter, father, grandfather. In fact, the journey’s provenance took root not a few months ago but six years ago.

Hiking the Camino wasn’t Brett’s idea, it was his father’s, Tom Gamboa, the most unlikely of European trekkers. He’s a baseball lifer, retired and living in Southern California. Tom, 70, spent most of his professional life scouting and managing in the minor leagues, but he spent some time in the major leagues as third-base coach of the Chicago Cubs and first-base coach of the Kansas City Royals.

On Sept. 19, 2002, Tom Gamboa became the subject of unwanted infamy. On that night, at U.S. Cellular Field in Chicago, unprovoked, a father and his 15-year-old son rushed out of the stands and attacked the unsuspecting Gamboa in the first-base coach’s box. They knocked him to the ground, punching and kicking him. It was the top national news story of the day; Gamboa suffered several cuts and bruises, and lost part of the hearing in his right ear.

Baseball beefed up its security largely due to that incident, as Tom eased back into the game. He coached in Kansas City for another year and then returned to the minors for another decade. Tom was manager of the Brooklyn Cyclones in the New York Penn League as recently as 2016, and bench coach for the Israeli national team in the 2017 World Baseball Classic qualifying round.

In 2012, Tom’s mother was diagnosed with terminal cancer and given only four to five months to live. It was early in the baseball season and he decided to leave his coaching post with Rancho Cucamonga, a minor league affiliate of the Los Angeles Angels, to spend time with her. “That’s it, I’m not going to coach for four months while my mother dies,” Brett remembers him saying.

One day, Tom and his mother watched the movie “The Way.” It forever affected him, a father walking that path in remembrance of his son.

“When she died, he decided to do it,” Brett says. “For us, this was kind of a lark. My father traveled for baseball, but not to Europe. He just kind of got on the trail. It was exciting and revelatory for him, living out what he saw in that movie. I think he came back thinking it would be amazing if the two of us could do it together.”

“This above all: to thine ownself be true”

Brett’s parents divorced when he was 11, and Tom was given full custody. Brett spent his summers on the road with his father in minor league baseball outposts across the country like Bristol, Va., Butte, Mont., Paintsville, Ky., Toledo, Ohio, and dozens of others.

Think “off the map,” Brett says.

By his middle teens, Brett was leaning toward a different path. He was attracted to literature. “I had a lot of ability in school without realizing it for a long time. I was interested in theater, music, poets,” he says. It drew him to Shakespeare and the theater, where he felt magic emanating from the stage. Today, he is immersed in Shakespeare, having directed 10 plays and written essays and reviews in several journals and books. At Dartmouth, according to his biography, he has taught courses exploring a range of artistic media, from lyric poetry to contemporary television.

Like a ballplayer climbing through the rungs of baseball, it was a long journey to Hanover. After stints in junior college and the Navy, Brett landed at Cal-Berkeley, where he excelled in the classroom. It’s also where he met his wife. They rose through academia together — he got a Ph.D. from Harvard University in 2010; she earned her medical degree at nearby Boston University. They lived in Manhattan while she completed her residency and he wrote his dissertation.

“I think when we left New England, we thought we’d never go back, maybe go back to the West Coast,” he says.

Instead, he got a position at Dartmouth and they moved to northern Vermont for a few years before moving to Keene in 2014. It was logical middle ground for their commutes, and they’ve settled in comfortably.

“The wheel is come full circle: I am here”

Ever since Tom Gamboa walked the Camino Trail in remembrance of his mother, he’s wanted to share the trail with Brett. “I think he came back thinking it would be amazing if the two of us could do it together,” Brett says. Time, young children — “the cats in the cradle bit” — kept them from that dream. The idea resurfaced this year, and with Bayan now 9, Brett figured the three of them could at least walk part of it.

“We decided that we’d go for like 15 days, maybe 200 miles, walk the best of the Camino, which is the first part,” Brett says.

Tom returned to California a week ago, as planned. He was having trouble with his hips and groin. Brett and Bayan, however, couldn’t let go. “We got into that rhythm, and it was just irresistible. Before we knew it, we had done 150 miles and crossed the Pyrenees, the most strenuous part,” Brett says. “One thing that is great, amid this, all of a sudden there’s this 9-year-old. There just are no 9-year-olds on the trail; you don’t see any kids on the trail.”

Bayan talks of the adult friends she’s made, of Jennifer, Susan (“she’s somewhere behind us now”), of Ryan who may meet them in Santiago. Her enthusiasm is reciprocated, Brett says, and she continues to learn Spanish. When people get wind that she has a 5-year-old sister at home, they tell Brett and Bayan they have to come back with her.

“I thought I could do it,” Bayan says. “The first few days it seemed hard — the first day was the hardest because it was uphill a lot, and then it started to get easier. 20k every day seemed like a lot. Now 20k seems like only a little bit.”

Every day, Brett adds, they can’t wait to see what’s around the next corner.