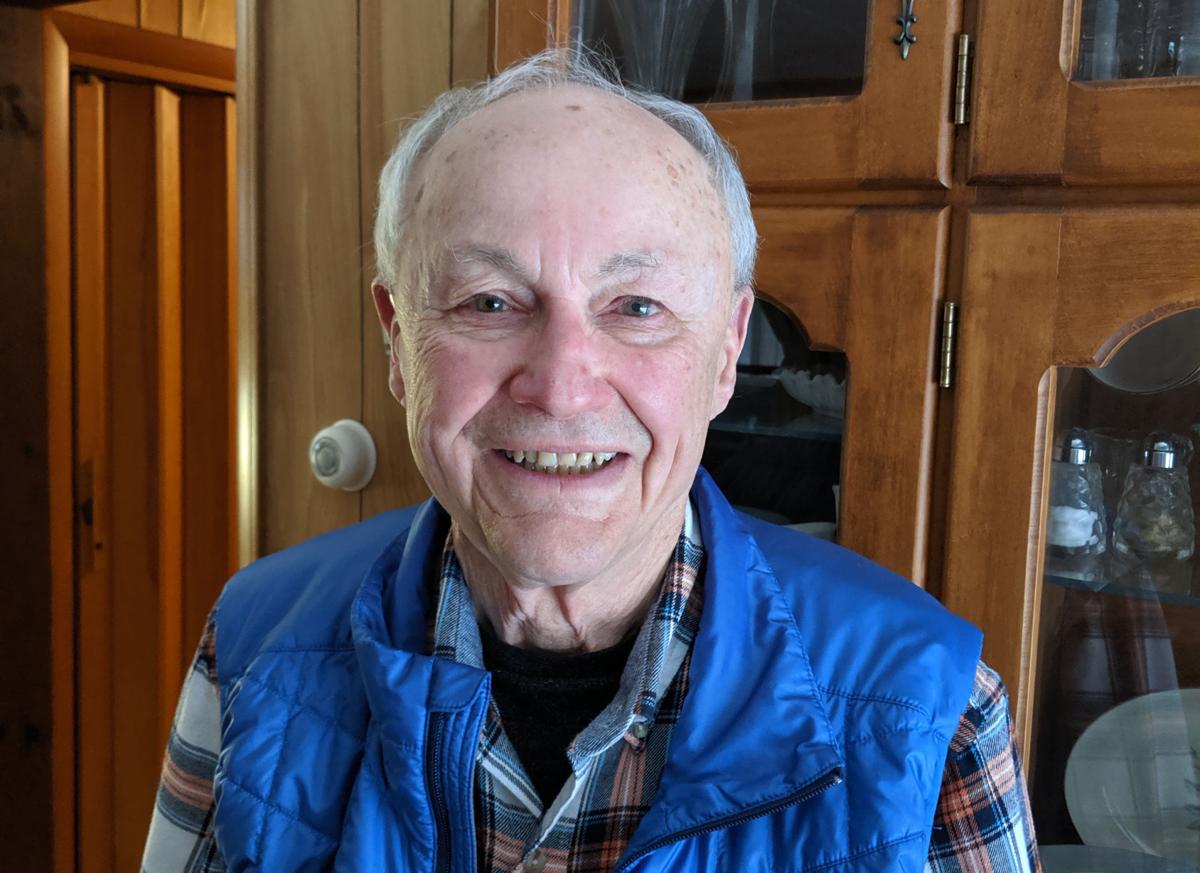 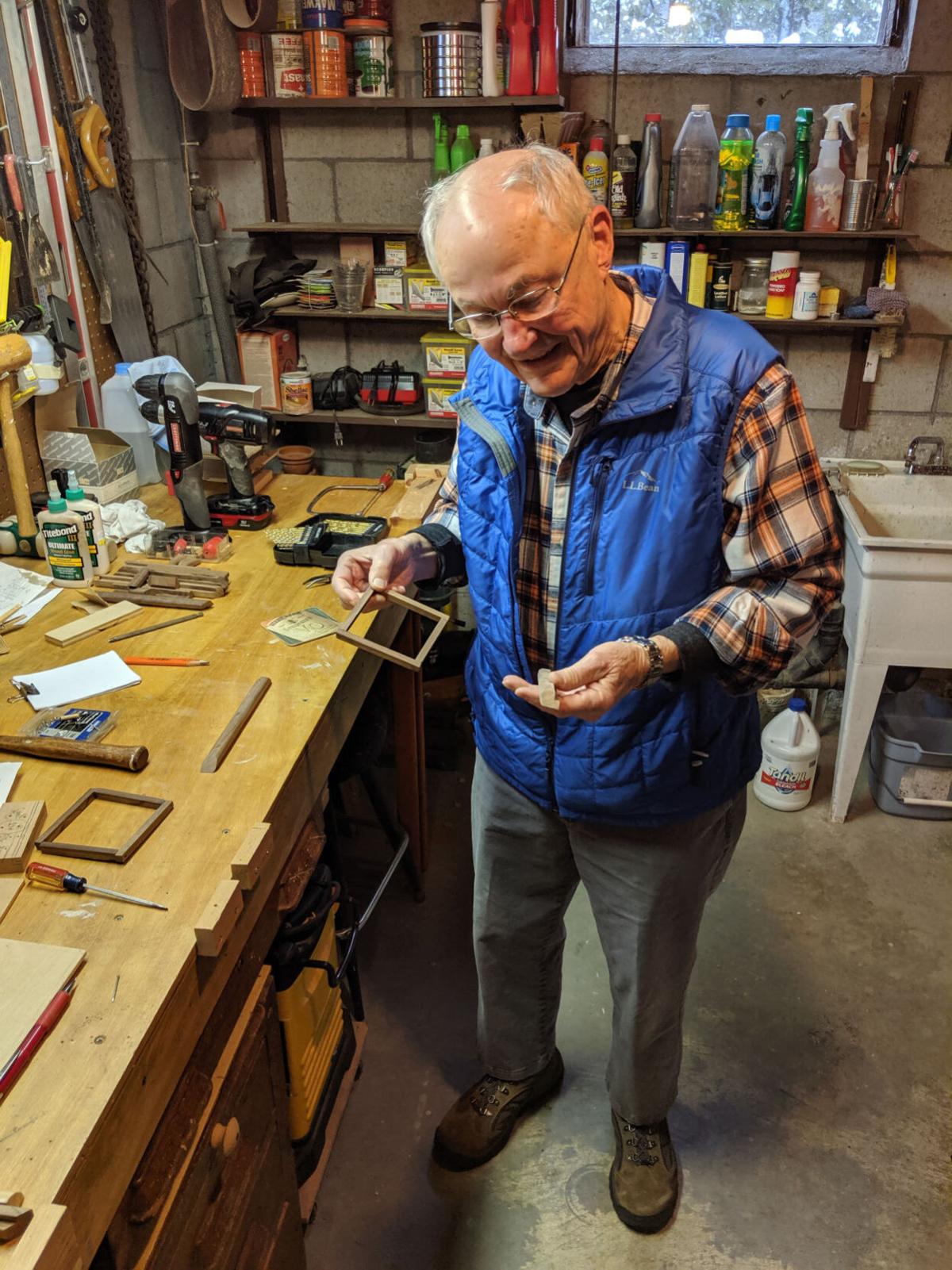 Mike Forrest, 83, has had a lifelong passion for woodworking and is shown here in his basement workshop in Keene. He crafts everything from bookcases and cribs to wood sculptures and toys.

Mike Forrest, 83, has had a lifelong passion for woodworking and is shown here in his basement workshop in Keene. He crafts everything from bookcases and cribs to wood sculptures and toys.

Mike Forrest has been retired since 2000 — officially — but at 83 years old, he finds himself busier than ever.

“That’s the way I want it, to be involved,” he says in a strong, clipped Yankee accent. “It’s not good to be idle.”

A Keene resident since 1980, Forrest has been and continues to be deeply involved in a number of high-profile organizations in the city, and has no intention of slowing down. His precise manner reflects his engineering background, and those with whom he’s worked describe him as a pragmatic problem-solver, especially in the realms of finance and building or renovation projects.

“Everything I’m involved with, I believe in very much,” he says.

He’s currently the board chair of the Keene Senior Center, which is conducting a fundraising campaign to upgrade its facility on Court Street. In addition, he is vice president of the board at Monadnock Developmental Services and remains active in the Keene Lions Club. He previously served on the boards of Home Healthcare, Hospice and Community Services, Monadnock Habitat for Humanity, and the finance committee of the Parish of the Holy Spirit in Keene.

The people he works with have abundant praise for the man.

“Mike is such a genuinely caring person; he gives freely of his time and knowledge to help,” says Susan Ashworth, director of community relations at Home Healthcare, Hospice and Community Services, which has offices in Keene, Charlestown and Peterborough. Forrest was instrumental in assisting HCS’ renovation of 312 Marlboro St. in Keene from a factory building into its present headquarters, which also houses its Castle Center for Adult Day Care. “He has stayed involved and is always there with a great smile and ‘how-can-I-help?’ attitude,” Ashworth notes.

His longtime involvement with the Lions Club has included presiding over its charitable giving committee, and working on the annual Duck Race and musical production.

“Mike has always been a ‘detail’ guy,” says Paul Scheuring, a Keene Lions member who added that Forrest’s work is invaluable to the organization’s finance committee.

And Diane Farina, director of volunteer and outreach services at the Parish of the Holy Spirit, says Forrest has given “countless hours” as the “volunteer de-facto facilities director” for the five churches, four rectories, three cemeteries and two schools that make up both the Parish of the Holy Spirit and Mary Queen of Peace Parish in Winchester.

“Mike has been an incredible blessing to our parish,” Farina says.

His story begins in Claremont, where he was born and raised, one of three children of Arthur and Ida Forrest.

His father worked as a machinist at Bryant Chucking Grinder Co. of Springfield, Vt., one of a half-dozen large industrial plants that made Springfield one of the busiest factory-towns in the nation, employing thousands at its apex during the two world wars, when it produced many of the machines used in manufacturing armaments. All of those companies are now shuttered, with Bryant closing in 2002.

His mother was a seamstress, working for a Claremont department store. One of her primary jobs was to hand-make window drapes for the scores of wealthy summer residents on Lake Sunapee.

Forrest describes Claremont at the time of his upbringing as a close-knit town where everybody knew everyone else, with many residents of French and Polish descent who worked in the local mills and factories.

During his childhood, he developed an interest in woodworking, a lifelong passion he still pursues from his basement workshop, crafting furniture, cabinets and a wide variety of other things such as bookcases, toys, cribs and wood sculptures.

“It all started when I took a shop class in 7th grade,” he recalls. “Grocery stores at the time received food shipments in wooden crates, and I’d go around and collect those boxes and make things from them. My imagination in making things from wood is still going crazy down there in my workshop.”

His work has won some recognition.

“The imaginative Michael B. Forrest, a passionate woodworker and fan of ice hockey, rescued a stave of broken hockey sticks from the local landfill and fashioned a whimsical chair and side table, a perfect seat for viewing the Stanley Cup playoffs,” wrote Greg Morell in Artscope Online in 2015, commenting on Forrest’s entry in the “Passionate Pursuits” exhibit at the Thorne-Sagendorph Art Gallery at Keene State College.

“I don’t want to take away from the other works at the exhibit, but I was told mine attracted the most attention,” Forrest says proudly.

After graduating from Stevens High School in Claremont, he enlisted in the U.S. Air Force, where for four years he was stationed at Otis air field on Cape Cod. During his time there, he served as an airborne radar technician on a four-engine Lockheed EC-121, its task to detect Soviet submarines in the Atlantic.

“Our average missions were 14 hours long,” he says, this being the height of the Cold War when the Soviet Union and the United States maintained rigorous surveillance of each other’s armed forces.

After his discharge, he enrolled at the Lowell Technological Institute in Massachusetts (now UMass Lowell) and earned a bachelor’s degree in mechanical engineering, graduating in 1965.

While at Lowell Technological, he met his future wife, Betty. At the time, she was a nursing student at Mary Hitchcock Memorial Hospital in Lebanon but was serving a year in Boston at the Lying-In Hospital, which is now part of Brigham and Women’s.

“I was living in a frat house with guys from Northeastern University,” he says, “and I didn’t have a date for the Fall Social. A guy I knew said he knew of a nursing student who was from Claremont. He knew I was from Claremont, so he assumed we knew each other. We didn’t.”

A romance blossomed, and they married July 28, 1962, in Claremont. They have two sons, Kevin, director of the Manchester VA Medical Center, and Bob, a surveyor in Chelmsford, Mass. Now retired, Betty worked with students with disabilities at both Franklin School in the Keene School District, and in the Monadnock Regional School District.

“When I graduated in 1965, times were good then, and I immediately had 10 job interviews and nine job offers,” Mike Forrest says.

Although he had offers to move to different companies around the country, the couple preferred small-town life in New England, and he elected to take a job that was offered, coincidentally, by his father’s old employer, Bryant Grinder in Springfield. They stayed there 17 years, raising their sons in Springfield. In 1980, he left his job with Bryant as manager of data processing and inventory control and began working as production and inventory control manager at Pneumo Precision in Keene, now AMETEK Precitech.

After five years with Pneumo, he became an estimator and project manager for F.W. Madigan of Worcester, Mass., a large commercial construction company. In 1988, he was hired as superintendent of code enforcement for the city of Keene, where he served until retirement.

Forrest describes the city job as challenging, making sure that builders and construction professionals — as well as citizens — adhered to the city’s exacting building codes. Along the way, there were bound to be conflicts, he notes.

“I was fair,” he says in describing his performance in that job.

He is still involved in an important city function, serving as a trustee of the city’s trust funds. The trustees are fiduciaries of the money and make decisions regarding investment and expenditures.

Forrest says the workload of his many projects isn’t tiring but is in fact invigorating, and he has no plans to throttle back.

“The work keeps me happy. I love being busy, and I love helping people.”