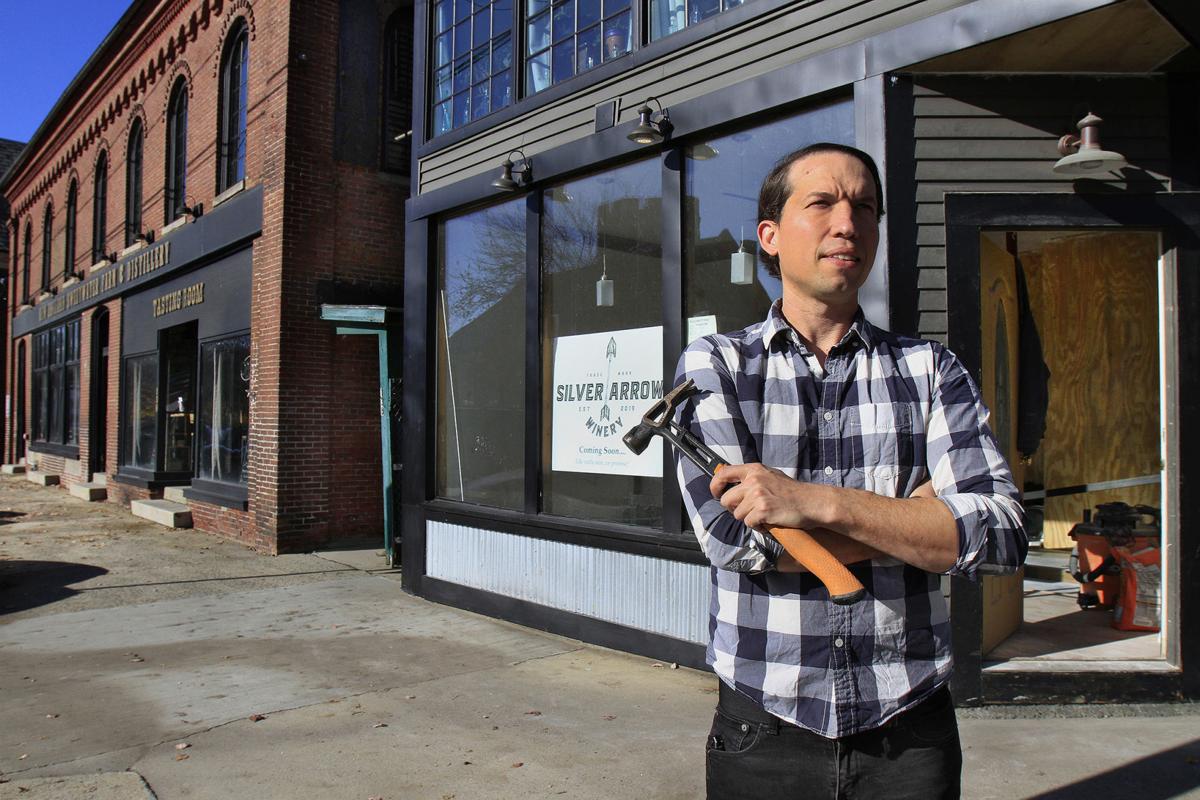 Dylan Eastman takes a break from work on the future home of his business, Silver Arrow Winery, in Winchester Thursday. At left, Eastman, center; Steve Ford, left; and Dave Clark, right, install a stove in the kitchen of the Brady Bunch home in Los Angeles. 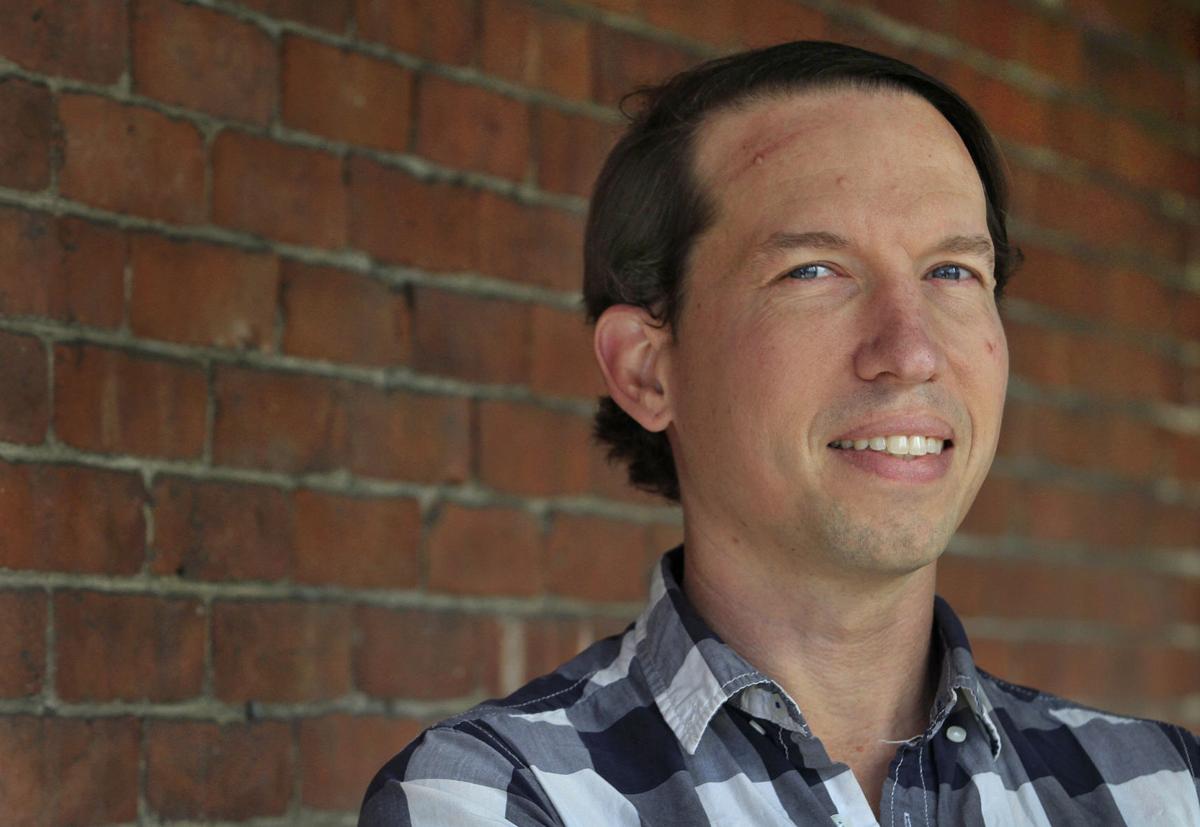 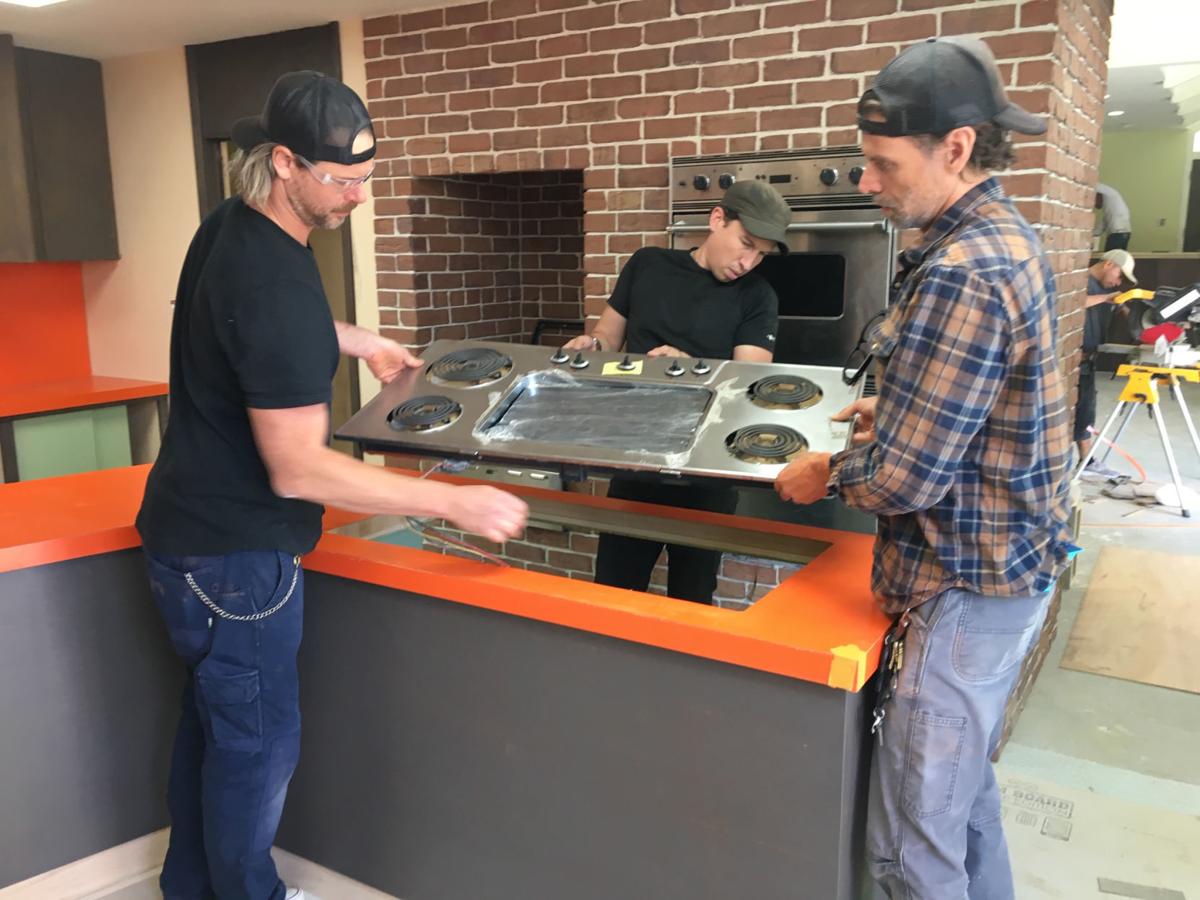 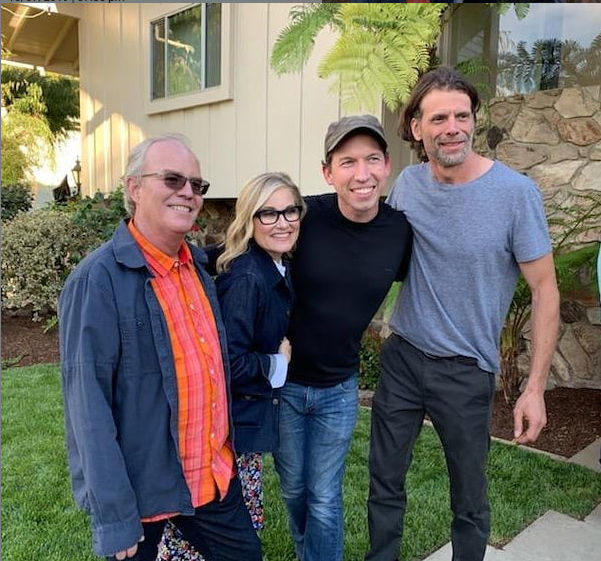 From left, Mike Lookinland, who played Bobby on "The Brady Bunch"; Maureen McCormick, who played Marcia; Dylan Eastman; and Dave Clark pose in front of the Brady Bunch house in Los Angeles. As a kid who watched "The Brady Bunch" growing up, Eastman said, "... if you told me that I would know the Bradys, and have their numbers in my phone, I’d look at you like, 'What? How is that even possible?' "

Dylan Eastman takes a break from work on the future home of his business, Silver Arrow Winery, in Winchester Thursday. At left, Eastman, center; Steve Ford, left; and Dave Clark, right, install a stove in the kitchen of the Brady Bunch home in Los Angeles.

From left, Mike Lookinland, who played Bobby on "The Brady Bunch"; Maureen McCormick, who played Marcia; Dylan Eastman; and Dave Clark pose in front of the Brady Bunch house in Los Angeles. As a kid who watched "The Brady Bunch" growing up, Eastman said, "... if you told me that I would know the Bradys, and have their numbers in my phone, I’d look at you like, 'What? How is that even possible?' "

Dylan Eastman recalls racing into the living room of his childhood home in Yorktown, Va., after school to get his blissful one hour of uninterrupted TV before his younger siblings arrived.

His choices were always the same — reruns of “Flipper,” “Lassie” or “The Brady Bunch” — and, typically, he preferred the latter.

“... if you told me that I would know the Bradys, and have their numbers in my phone, I’d look at you like, ‘What? How is that even possible?’ ” he said.

Eastman was hired as the design and build manager for HGTV’s “A Very Brady Renovation,” in which the six living cast members of the 1970s sitcom teamed with renovation stars Drew and Jonathan Scott, also known as the Property Brothers, to renovate the Brady Bunch home in Los Angeles.

The six-part series, which finished airing earlier this month, aimed at recreating the show’s sound stage inside the physical property used for its exterior shots.

As a contractor, Eastman said he’s spent the past eight years working with both the DIY Network and HGTV on various renovation shows, including “House Crashers,” “Rescue My Kitchen” and “Desperate Landscapes.”

But it wasn’t always so glamorous.

Born in Petaluma, Calif., Eastman moved with his family to Yorktown when he was just a few years old when his father, who was in the Coast Guard, was stationed there.

The 195-person town became Eastman’s home, alongside his mother, a teacher; and two younger siblings.

Growing up, he hoped to one day become an electric-car engineer, with his father a “strong influence in regard to science.”

As college neared, “I applied only to engineering schools with electric- or solar-car programs, of which [Virginia Tech] was one,” he said. “At that time, my uncle was one of the engineers behind the GM EV1, which came out in 1996.”

But during his first year at Virginia Tech in 1997, the solar-car program was cut from the curriculum.

“They said solar energy was dead,” he said.

Eastman shifted his major to environmental science and earned his bachelor of science in 2001. He wanted to work on environmental protection for a nonprofit organization and “save the world,” but the economy had other plans.

“It was really hard to find a job in your field if you didn’t have a master’s degree or already had experience, so I started doing construction until I could find my ‘real job,’ ” he said.

He started working for Courthouse Construction Inc., in Gloucester, Va. — which has since shuttered — and ended up learning all the tricks of the trade.

“I went from not knowing what a hammer is to working directly under the boss,” he said.

In 2011, the DIY Network was renovating a home in Virginia and hired Courthouse to help with the job. The experience shifted Eastman’s view on the construction world, he said, showing him there’s more beyond just building the structure.

Not only did he need to build the home, but the company was also responsible for the interior design. The design focus excited him, making him want to pursue it more.

Once the Virginia home was finished, Eastman left the construction company and continued with TV renovations across the country.

One project took him to Maine in 2012, where he met Robert Patton-Spruill and Patti Moreno, both of Winchester. The couple — now owners of New England Sweetwater Farm and Distillery in town — had a small production company, 617 Digital, which was hired by DIY Network to help shoot short online videos of the network’s renovations.

Around 2014, Patton-Spruill recruited Eastman to help design and build the distillery, about the same time as Eastman wanted to relocate from Virginia. New England intrigued him, he said, so he decided to make the move to Winchester in January 2016.

When asked why he wanted to hire Eastman, Patton-Spruill said it was simple.

“He’s a genius, to be honest,” he said. “When you meet people smarter than you are, you kind of want to get them in your orbit, and luckily, we were able to convince him the Monadnock area was not so bad.”

Shortly after, Eastman started his own contracting firm, Eastman Industries LLC — soon to be known as Monadnock Design Studio. He also owns Keene 3-D, which provides virtual tours of properties for real-estate agencies.

His local construction projects have included Montshire Pediatric Dentistry on West Street, and, of course, New England Sweetwater Farm and Distillery in Winchester.

“Culture and arts is really important to me from a perspective of ‘What am I doing in this town and why am I here?’ ” he said. “It’s not for the most money, because I could go to L.A. and make more money ... I want to make sure we are contributing in some way.”

With each project, whether on TV or for his own firm, Eastman said he has become more advanced in his craft, leading him to being “in charge of everything” on the Brady house renovation.

But this came with its own set of challenges.

The show has a lot of inconsistencies, he said, because it aired at a time without reruns or DVDs. That meant the show’s design team had nothing to check against how they’d arranged the set in previous episodes.

If the layout was changed slightly on the sound stage, no one would pick up on it until the reruns started in 1975, a year after the series’ final season.

“The room overlap was hard,” he explained. “There was all this re-figuring it out to figure out what is a perfect example of the show.”

He found himself having to rewatch every episode, sometimes more than once, to fill in the plot holes and create a real-life layout of the home.

“The first thing was to figure out how to get this fictitious house — that’s actually a sound stage — and put it inside the house they used for all the exterior shots,” he said. “The house is half as big, there’s no true second floor ... so it’s putting together a team of people to figure out how to make it.”

There were also several parts of the house Eastman had to create using 3-D printing because they aren’t made anymore, such as specific furniture made in the ’60s.

Through the process — which lasted 10 months, starting in August 2018 — Eastman said he got very close with the actors who portrayed the Brady siblings on the show. They practically grew up on set, so seeing how much the renovation meant to them rubbed off on Eastman and his crew.

He gave sentimental tokens to some of them, like extra couch fabric to Maureen McCormick, who played Marcia, to use for craft projects, and his 3-D printer to Christopher Knight, who played Peter, to add to his tech-gear collection.

“I didn’t expect [these relationships] to be part of the job and on the last day to be sad to say bye to them, your new friends,” he said. “It wasn’t just a job for us; it was recreating this moment in time that they had experienced.”

But now that the project is finished, Eastman said, while he’ll continue TV work, his next focus is here in the Monadnock Region.

He hasn’t set down roots since his construction job in Virginia, and said he plans to stick around New Hampshire for a while with his girlfriend, Naomi Risch of Winchester.

The pair plans to soon open their own winery — Silver Arrow Winery — hopefully by Thanksgiving, next to Sweetwater at 144 Main St. The establishment will feature wines, ciders and meads made from local ingredients.

Eastman said he sees the potential towns like Winchester and Keene have, and wants to use his work to build on it.

“I’m trying to be a positive impact on not only the built environment, but the environment people experience here,” he said. “It’s about having a good impact with what you do.”

Those interested in watching “A Very Brady Renovation” can view episodes at https://watch.hgtv.com

This article has been changed to correct that Eastman was not involved in the renovation of Machina Kitchen & ArtBar in Keene.

Olivia Belanger can be reached at 352-1234, extension 1439, or obelanger@keenesentinel.com.

At a glance: Dylan Eastman