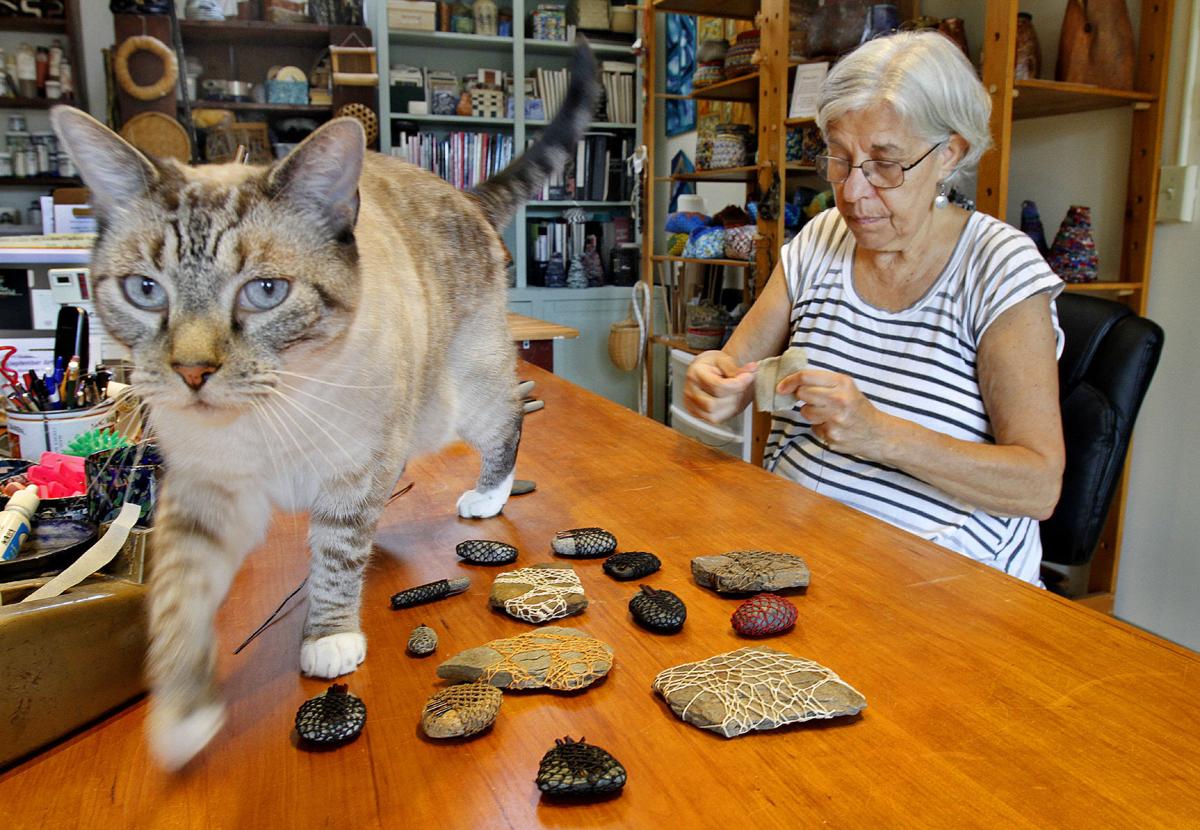 Jackie Abrams of Brattleboro is often kept company by her cat, Sam, at she works in her home studio. She’s seen here working on her current project, looping stones, which will be components for a larger installaion. 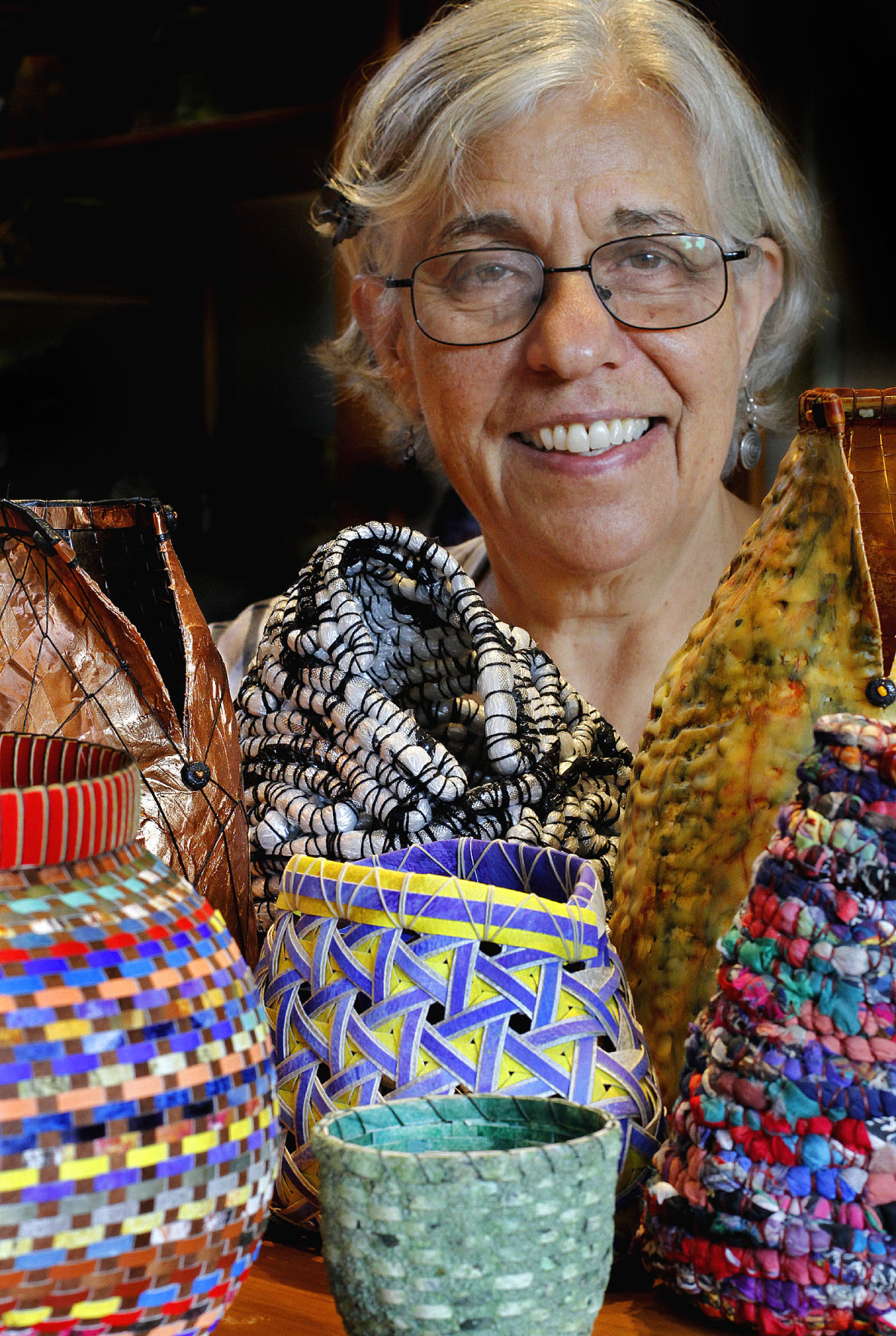 Jackie Abrams, of Brattleboro, with some of her contemporary baskets, woven using traditional techniques and non-traditional materials.

Jackie Abrams of Brattleboro is often kept company by her cat, Sam, at she works in her home studio. She’s seen here working on her current project, looping stones, which will be components for a larger installaion.

Jackie Abrams, of Brattleboro, with some of her contemporary baskets, woven using traditional techniques and non-traditional materials.

I t’s not often that walking into a store changes the trajectory of one’s life. But in the case of Jackie Abrams, that’s exactly what happened.

It was the mid-1970s and 26-year-old Abrams was considering going back to school to get a doctorate when she came across a shop in Chesterfield, Mass. Stepping inside, she met 81-year-old Ben Higgins, a retired basket maker who had learned how to make traditional baskets of light ash trees from his father.

Abrams knew in that moment that making baskets is what she wanted to do for the rest of her life. It took several insistent trips back to the shop to convince him, but Higgins finally agreed to take her on as an apprentice.

“I quit everything to become his apprentice,” she said. “My parents were not happy, you know, giving up a paying job, but I just knew I had to do it.”

Always interested in the arts, Abrams was never encouraged to pursue it as a career because it wasn’t considered a viable option. In fact, Higgins first told her that girls can’t do this work; a man had to be involved. So she enlisted her friends, a married couple, for the first month and by the time they left, “he realized girls could do it,” she said.

Abrams worked there for six months, spending four days a week with Higgins and the fifth with his wife, learning all sorts of basketry techniques. Forty-one years and many workshops later, the 67-year-old Brattleboro artist has made thousands of baskets and travels the world teaching the craft to others.

Abrams moved to Vermont shortly after her apprenticeship ended in search of a simpler life where she could grow her own food. Having grown up in the New York City area, she wanted to live away from a busy city.

The next big step in her career came in 1977 when she was accepted into her first national show, the Rhinebeck Craft Show run by the American Craft Council.

“That show was both wholesale and retail and literally overnight I had enough orders to put me in business,” she said.

She quit her job at the art supply store where she had been working, in favor of full-time basketry. With two babies at the time, Abrams worked from home, filling wholesale orders and sending her daughters to visit their grandparents during the big craft fairs. Her early career centered on traditional, functional baskets, but after 13 years she felt like her craft wasn’t growing or developing; she was stuck in a routine.

“Someone could order … five medium-size market baskets and I had created the first one; (that) was creative, but then I wrote a pattern from myself so I knew what material to pair and how much. There was no creativity anymore,” she said.

Married at the time with another income in the house, she decided to take a couple of years to develop other techniques and reawaken her creativity. One series that has kept her engaged for many years is Women Forms. The concept manifested itself in the early 2000s when a friend saw a lineup of Abrams’ nearly-finished vessels made with a woven-paper and wire technique.

“And my friend said to me, ‘Those look like bodies there, like women standing there.’ She was the one to say that observation, and I took off from there.”

Just before her first trip to Africa in 2005, she encountered a picture of a Senegalese woman that inspired her to paint the woman’s dress on a piece of paper and cut it up. Since then, much of her work has deliberately embodied women and shapes reminiscent of women’s bodies.

“It was always somehow in my mind relating to Africa. And I hadn’t met any African women yet, but I did shortly after that,” she said.

She contrasted the symmetrical baskets she used to make with the smooth, non-uniform ones she wanted for the women forms. The vessels don’t have heads as she’s not trying to create the exact image of a woman, but the shape implies a neck and a shirt.

“I weave it and deliberately weave in lumps and bumps and shapes because we’ve all had lumps and bumps in our lives, and none of us have a perfectly smooth life,” she said.

Abrams retired from craft shows two years ago. But over 39 years, she would travel to cities such as Washington, D.C., and Philadelphia, and the shows she brought women forms to got great response.

“And they get that it contains the experience of that woman. It spoke to some people that it reflected what they saw when they saw women’s bodies,” she said. “I get to play with the surfaces, which is why it has continued to interest me for all of these years.”

Abrams met many of the women embodied in the forms during her many trips overseas to Australia, New Zealand, Ghana, Uganda and Namibia. Her most recent trip was to New Zealand earlier this year, where she spent three weeks teaching and traveling.

She knows what techniques she’ll teach for each workshop, but lets her surroundings inspire her work. During one trip to Africa, for example, she and a friend drove along the northeast coast, and each day she’d collect a handful of items, such as sticks, coral and stones. Since she always travels with a little bag of tools and supplies — usually scissors, wire cutters, needles, crochet hooks, wax linen — in the evenings she’d take the day’s found items and put them together.

“I ended up taking them home and putting them all together in a larger piece, and that became this workshop that I’ve started to offer, Collect and Connect,” Abrams said.

For Collect and Connect, people bring their own found items to the workshop and learn how to put it all together using six or seven basic basket techniques.

Most materials are fair game for Abrams these days. For many years she used heavy-duty, 100-percent cotton paper and acrylic paint to weave into baskets. This is still primarily what she teaches, though she doesn’t use it in her own work.

Some materials come to her serendipitously — a stone found in the woods or strips of recycled silk blouses from a friend — and other times she has a specific texture or color in mind. Her favorite material depends on the day. It could be her collection of naturally hued sands taken from across the globe or dry-cleaner bags.

One of her more unique materials stems from a trip to Ghana where she used black plastic bags for a coiling technique. During one of several trips to the country, she became frustrated by the lack of a trash pickup system that resulted in plastic shopping bags littering the ground. She decided to teach local women to collect and wash the bags, cut them to make yarn and crochet them into functional pieces.

“And the idea is they’re not dependent on me, so I leave and they can still earn some money from doing bags,” she said. “I came home and thought, ‘Oh, we have bags here too.’ So I’ve used plastic bags for my own work.”

Her uncommon materials and abstract concepts are aspects that intrigued Jim Giddings, co-owner of Mitchell • Giddings Fine Arts in Brattleboro, where Abrams has a solo exhibit now.

“We try to choose work for any medium really that stands out and surprises us,” Giddings said. “Her sense of form and use of materials … people love it. They are in awe of the shapes she creates and the look she achieves.”

Two vessels in the exhibit that stand out to him the most are “Dreaming of Uluru” and “Shelter.”

“Both are remarkable for the surface appearance, but also the craftsmanship and what she does with the material,” he said.

The exhibit is open through Sunday.

Over the past decades, Abrams has made thousands of baskets influenced by her surroundings. She recalled one of her most dramatic pieces that came from a month-long trip to Namibia to visit her oldest daughter, Dani, who was in the Peace Corps.

One day, Abrams’ daughter took her to make baskets with a group of Himba women. One woman in particular spent a lot of time with her, inviting Abrams into her hut. When she returned to the U.S., Abrams took sand she collected from the Kalahari Desert and heavy metal beads she purchased from the Himba people and created a form in the image of the Himba woman named Tange.

“When I came home I made this woman out of my materials ... and I covered her with sand from the Kalahari and put these beads on her,” she said. “Of all the pieces I’ve ever made, perhaps that was my favorite.”

Though it was a favorite, Abrams sold that piece. She said she’s kept one piece of each series over the years, but not necessarily because it’s a favorite.

“I get toward the end of a series and know I’m not going to be making any anymore so I select one from what’s left,” she said. “If I kept all of them there wouldn’t be room for me to move in the house.”

She’s given baskets to friends over the years too — you can tell how long she’s known people by how many baskets are in their house — and doesn’t have trouble parting with her work because it’s not only her craft, it’s her livelihood.

Apart from her upcoming workshops at Snow Farm in Massachusetts and Southwest School of Art in Texas, Abrams is working on two projects. The first is introducing light to some of her suspended pieces. She wants to create shadows among the negative space cast from the interior. She’s also playing around with her collection of stones and ways to attach them.

“The collection is growing and sitting on my tabletop, and we’ll see where it goes.”

At a Glance: Jackie Abrams