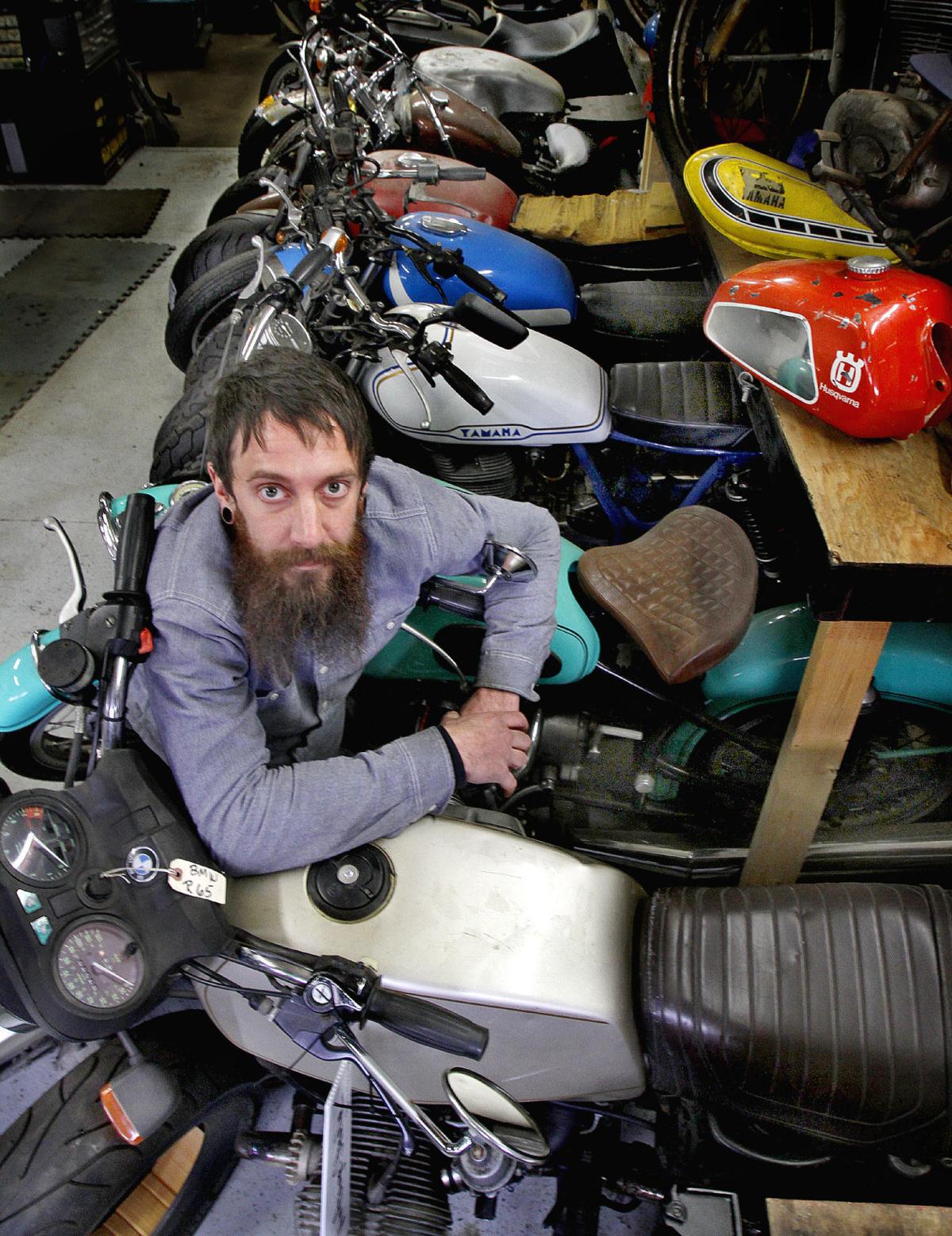 Josh Steele, of Vintage Steele in Brattleboro, with some of his shop’s inventory. 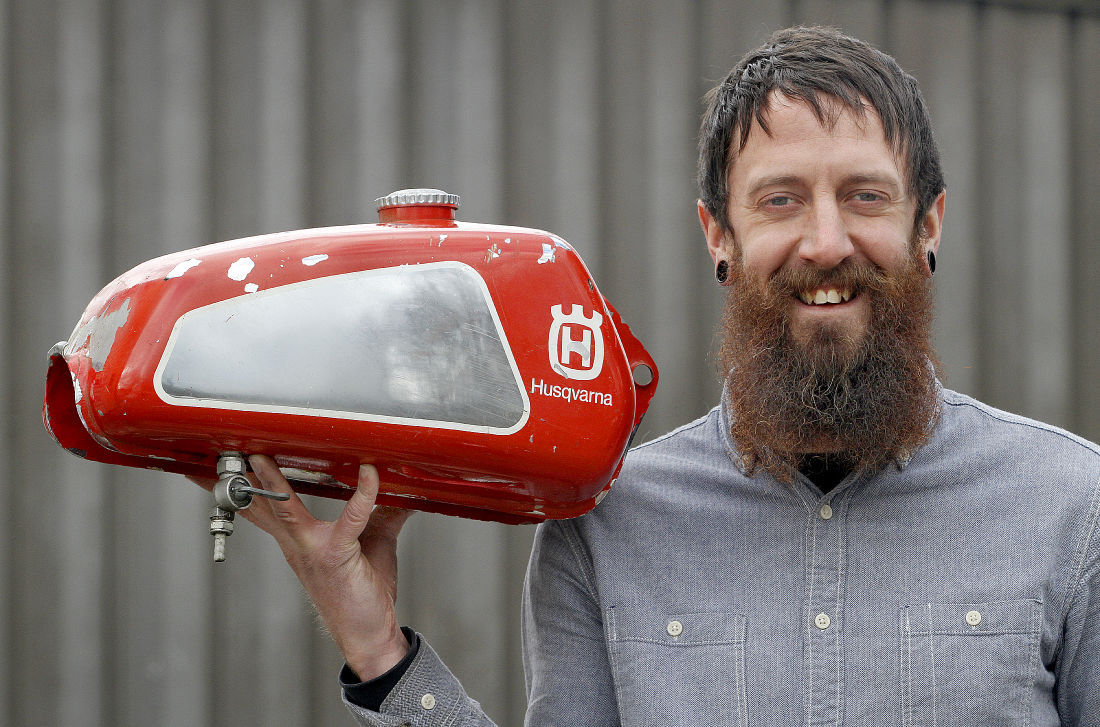 Josh Steele, of Vintage Steele in Brattleboro, holds a gas tank from a Husqvarna motorcycle, circa the 1970s.

Josh Steele, of Vintage Steele in Brattleboro, with some of his shop’s inventory.

Josh Steele, of Vintage Steele in Brattleboro, holds a gas tank from a Husqvarna motorcycle, circa the 1970s.

BRATTLEBORO — Just off Interstate 91, behind a print shop, is a garage that specializes in old motorcycles. Visitors are alerted to the hidden building by a sign constructed from the skeleton of a discarded bike.

On a bright January morning there are half a dozen bikes parked alongside the building, looking forlorn as their tires rest on a patch of snow waiting for spring.

Inside are three bright-red hydraulic lifts, each with a bike perched atop, ready to be wrenched on. The far end of the garage is crammed wall-to-wall with old, two-wheeled machines in various states of repair. Overhead, hung like stalactites, are scores of motorcycle gas tanks of every shape and color.

Vintage Steele is the creation of 32-year-old Josh Steele of Brattleboro. Steele is a tall, lean man with a baritone voice and a long, dark beard.

Vintage Steele began just around the corner from its current location when in 2010, Steele and his partner, Sarah Rice, purchased a 900-square-foot house with a detached garage that became Steele’s first workshop.

When Steele set up the workshop he had no idea how a hobby of working on old motorcycles was to become his life.

Steele not only repairs and sells old bikes, but also builds them by taking a factory stock motorcycle and re-imagining it, changing its look and function. He believes that bikes can be modified and customized to reflect the personality of their riders.

Vintage Steele has built more than 16 custom motorcycles, but there are maybe eight that’s he’s proud of.

Customizing a motorcycle is a collaborative effort. Steele, along with Vintage Steele’s co-owner, Chris John, who came up with the garage’s name, work with a cast of characters who contribute to each project’s success.

John met Steele five years ago when John was looking for his first motorcycle. John indicated that he also wanted to learn about motorcycle maintenance, so Steele invited him back. John returned every day, and eventually a partnership was formed.

“It all happened sort of naturally; he showed me how things worked, and it all just clicked,” John said. “I finally found something that I could be good at.”

On one of the lifts is their latest candidate for metamorphosis, a 1985 BMW K100, dubbed “the flying brick” because of the shape of its engine. This motorcycle will be transformed into a unique piece of two-wheeled art. It will be crated up and shipped to Portland, Ore., to be shown at the 1 Moto Show, an invitational showcase for some of the best motorcycle builders across the country.

Though Steele never had any direct interaction with motorcycles growing up, he’d always been mechanically curious. He took apart anything he could get his hands on — to the point where his mother stopped buying him watches because they’d soon end up dissected.

His fascination with working on motorcycles was a natural evolution of fixing his own bicycle as a kid. Steele has not had any formal training, learning rather by persistent trial and error.

Steele was born in Cleveland, and then moved when he was 5 to Marshalltown, Iowa, where he lived until he, his parents and two sisters moved to Brattleboro when he was 11.

The transition to a new school was hard for Steele, so he was home-schooled by his mother during 8th grade. This wasn’t a fit for Steele either, and he decided he’d instead earn his GED.

While the rest of his friends attended high school, Steele threw himself into his love of snowboarding, and gave lessons at Mount Snow in West Dover, Vt.

At 17, Steele decided he was going to travel West, where he planned to pursue his snowboarding passion, stay with friends in Eugene, Ore., and become a “ski bum.” But once there, he discovered there were few opportunities to get out of the city to the ski resorts, and was not able to go snowboarding.

While in Oregon he met a group of people living a transient lifestyle, which appealed to his sense of adventure and included hopping freight trains and hitchhiking across the country. Steele quit his job as a cook and moved to Portland to begin what he calls his “wanderlust years.”

For the next several years Steele would crisscross the United States, hitchhiking and riding in boxcars like a Depression-era tramp. He says he experienced the best and worst of America from that vantage point, and he recalls riding a boxcar through the Rockies, huddling against a fellow traveler for warmth because the train was traveling too fast to get off.

“The most informative, self-exploring part of what has shaped me as a person was my train-hopping years,” said Steele.

By 20, he had traveled one way or another through every state in the continental U.S. In 2006, at the age of 23, he decided to slow down, and returned to Brattleboro to reconnect with friends and family.

One person he reconnected with was Sarah Rice, whom he’d met at the Rock and Roll Hall of Fame in Cleveland during one of his cross country excursions. The two soon struck up a relationship.

He got a job at a local record store, where he worked for the next several years. In the back of that store was a space he and Rice rented and turned into an art gallery called Through the Music. Their intent with the gallery was to support local artists by giving them a place to show their work. It stayed open until 2012.

By then Steele had left the record store and started working with local at-risk youth through Youth Services, a nonprofit organization contracted through the Vermont Department of Children and Families. Working with children in such difficult situations took a toll on Steele, and he left the job in 2013.

“When you start a job like that and you think that you have a chance at saving the world, and you realize quickly that you can’t save the world, the burnout factor happens quicker,” said Steele.

Though no longer working for the state, Steele still reaches out to area youth by offering an internship program at the garage.

Since its 2010 inception, Vintage Steele has continued to grow. In the early years, if the garage had 10 or 15 motorcycles, it was a lot. These days Vintage Steele may have well over 60 bikes in its inventory, waiting to be brought back to life. In 2012, Steele decided to expand beyond the confines of his home garage to the facility the business occupies today.

Vintage Steele’s work has not gone unnoticed. Images of Steele’s creations have been featured in print and on motorcycle websites. The garage was also featured on The Great American Country Channel’s “Made in America.”

Riders with a penchant for vintage machines seek out Steele and his gang for repairs during the short New England riding season, to keep their bikes on the road. In the colder months, Steele turns his efforts toward custom builds.

He still feels the pull to travel, and says he hopes the business will get to the point where he can step back from the repair side, and just travel the world, seeking out motorcycles for restoration.

Next month Steele will travel for the 1 Moto show back to Portland, Ore., to where his wandering began so many years ago.

This time he leaves knowing he will return to the home and to the life he built, with his own hands, out of vintage steel.

At a glance: Josh Steele