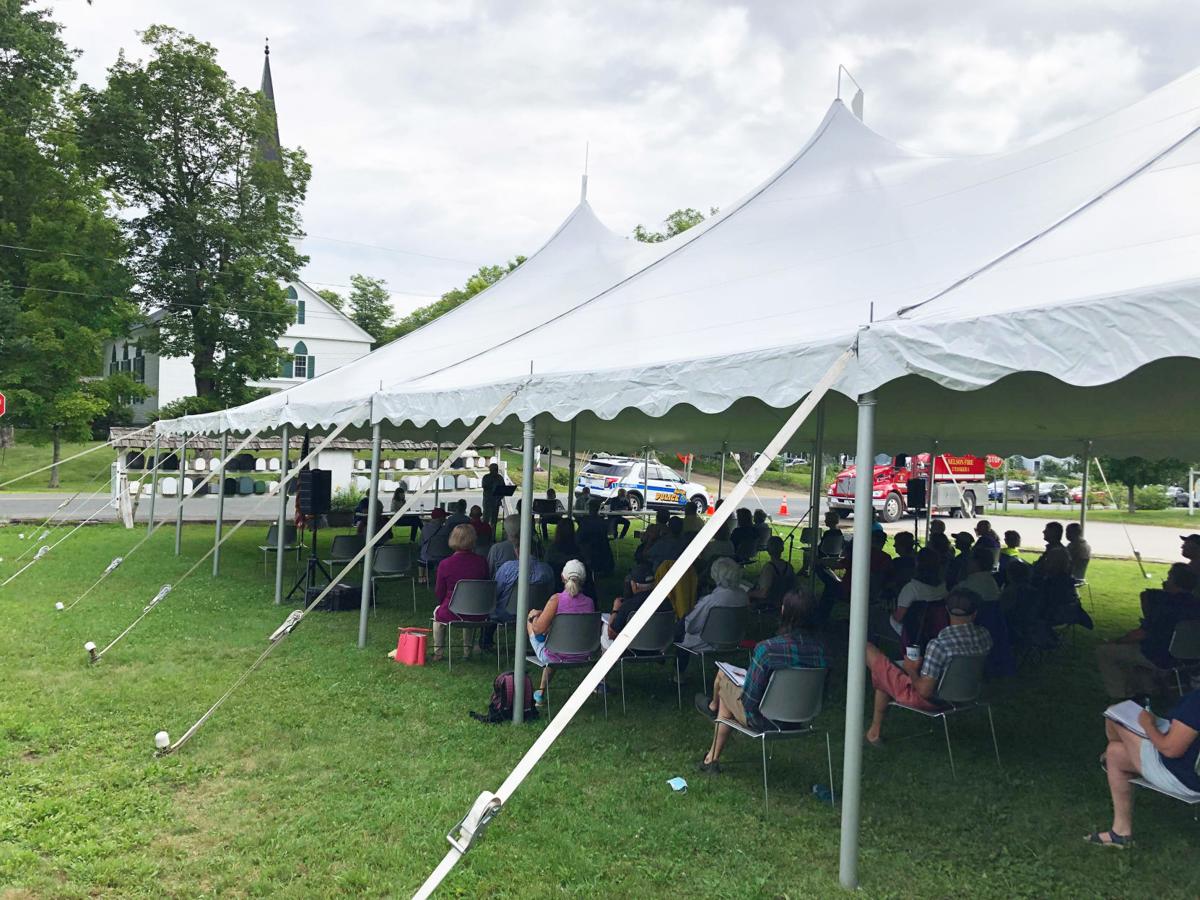 Nearly 90 people gathered Saturday for Nelson’s town meeting, which was held under a tent on the town common. At right, Moderator Lewis Derby addresses residents at the meeting. 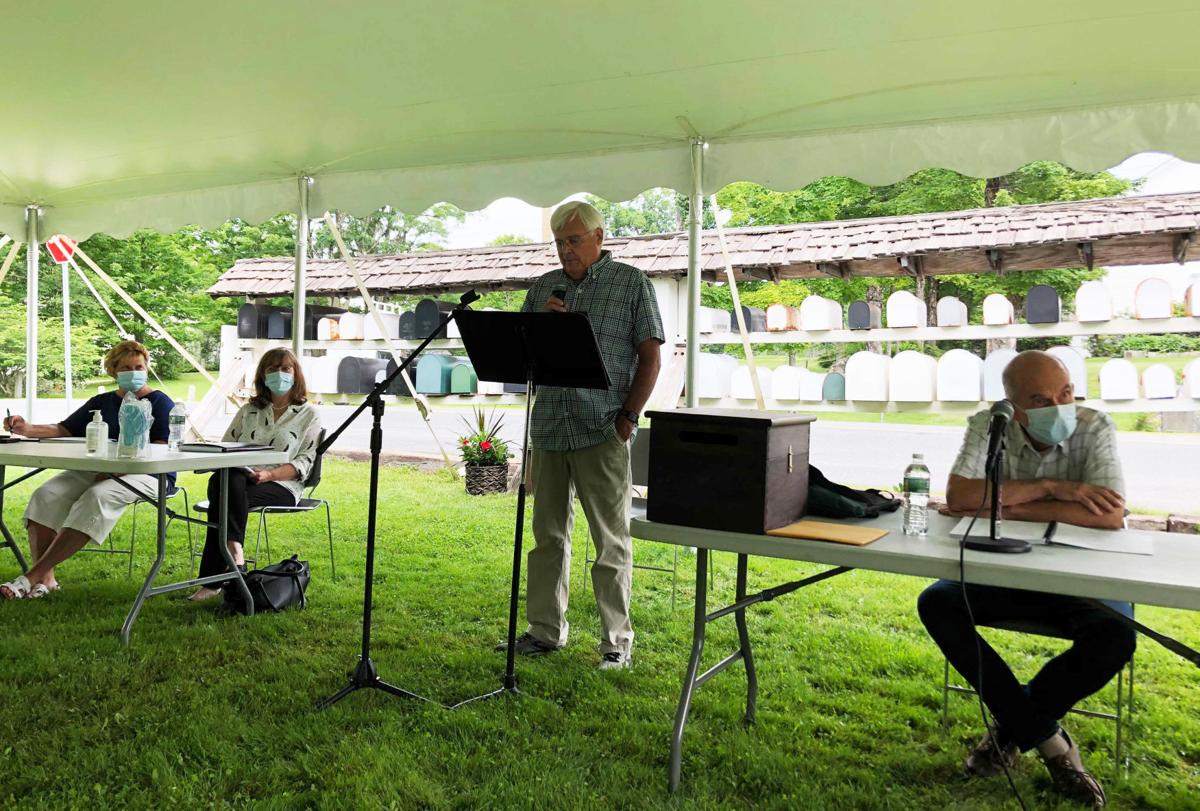 Moderator Lewis Derby addresses residents at Nelson’s town meeting Saturday, which was held under a tent on the town common.

Nearly 90 people gathered Saturday for Nelson’s town meeting, which was held under a tent on the town common. At right, Moderator Lewis Derby addresses residents at the meeting.

Moderator Lewis Derby addresses residents at Nelson’s town meeting Saturday, which was held under a tent on the town common.

NELSON — Voters unanimously approved a $974,000 municipal budget Saturday in the region’s final town meeting of 2021, when many communities postponed their annual sessions due to the COVID-19 pandemic.

Nelson’s outdoor meeting, which local officials had postponed to give residents more time to get vaccinated against the virus, drew close to 90 of the town’s 497 registered voters under a large tent on the town common. Attendees easily approved most of the warrant articles, though a proposal to install a lighted flagpole at town hall drew lengthy discussion and was ultimately rejected.

The town’s 2021 operating budget is up about 7.1 percent from the $907,000 budget that was passed last year. That increase is due largely to Nelson’s loan payment on a grader — a vehicle used to flatten land, often for a new road — bought last year and an upcoming reassessment of all properties in town, Selectboard Chairman David Upton told residents Saturday.

Since Nelson spent only $702,000 last year, however, Upton said the leftover funds will likely be used to reduce residents’ local property tax obligations.

Town meeting attendees also voted to raise nearly $41,000 for the library, mostly from taxes, and $5,000 to restore damaged headstones in local cemeteries. They also added $25,000 each to capital reserve funds for town building maintenance and new fire equipment, as well as $10,000 to a police-equipment fund, which police Chief Richard Pratt said will eventually go toward buying a new cruiser.

A warrant article that proposed raising $10,000 to pave a gravel driveway at the Granite Lake fire station in Munsonville, meant to prevent soil erosion into the lake, drew pushback from multiple people who said the runoff comes not from the fire station but from nearby homes.

Win Raynor told attendees that erosion from properties on Lakeview Terrace, where he lives, is largely responsible for carrying sediment into the lake.

“If you came and swept that up, it would solve a lot of problems,” he said, “because the next big storm, it’s in the lake.”

Despite the opposition, voters approved the paving project 47-21 in a headcount.

The proposal to install a lighted flagpole at Nelson Town Hall — which doesn’t currently fly an American flag, though there is one on an adjacent structure — provoked a spirited debate among voters.

John Bunce, who introduced the measure, said the building should have a flagpole in compliance with the U.S. Flag Code, which states that any flag flown at night should be “properly illuminated.” Bunce challenged voters to think of “another town hall without a flagpole,” saying its installation would be a patriotic display.

Several residents who live near town hall argued, however, that the lighting would brighten the area at night, eroding its natural character.

Valerie Van Meier suggested flying the flag only when the building is open, saying “we have had more and more light creeping into this village” due to motion-activated lights at nearby homes. Another resident, Andy Wilson, clarified that while he isn’t opposed to displaying the American flag, he doesn’t want “yet more illumination” in the center of town.

“I would prefer that the village remain … the way it’s meant to be,” he said.

Voters also approved the creation of a committee to research the need for expanded broadband service in Nelson and to solicit installation proposals from Internet providers, which several residents said is needed to prevent a digital divide in town. A number of area towns have partnered with Consolidated Communications in recent years to provide faster Internet for residents.

Saturday’s meeting ended with a tribute to Upton, the selectboard chairman, who is leaving the board after he was defeated by Brenna Kucinski in last week’s municipal elections.

Attendees shared their appreciation for Upton, who spent nine years on the selectboard, by recounting the projects he helped accomplish, including renovations to the library, repairs on the Bailey Brook bridge and an ongoing effort to make town buildings more energy efficient. Amy Whitney, whose husband, Gary Robinson, is on the selectboard, praised Upton for “putting in more hours than anyone can possibly imagine to make sure that Nelson is on solid financial ground.”

“He has been an incredibly hard worker,” she said.