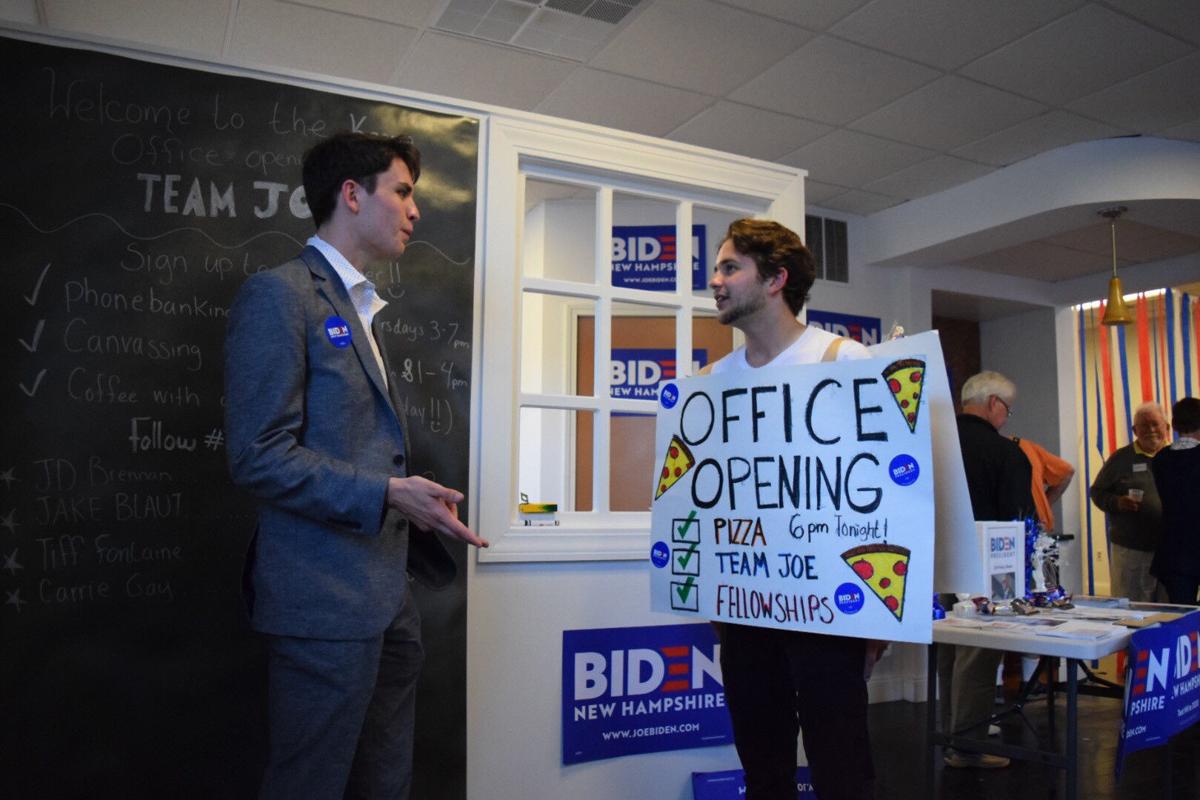 Jason Carter, left, a Keene State College sophomore from Hillsboro, talks about the 2020 presidential campaign with Jake Blaut, a field organizer for the Biden campaign who is based in Peterborough. 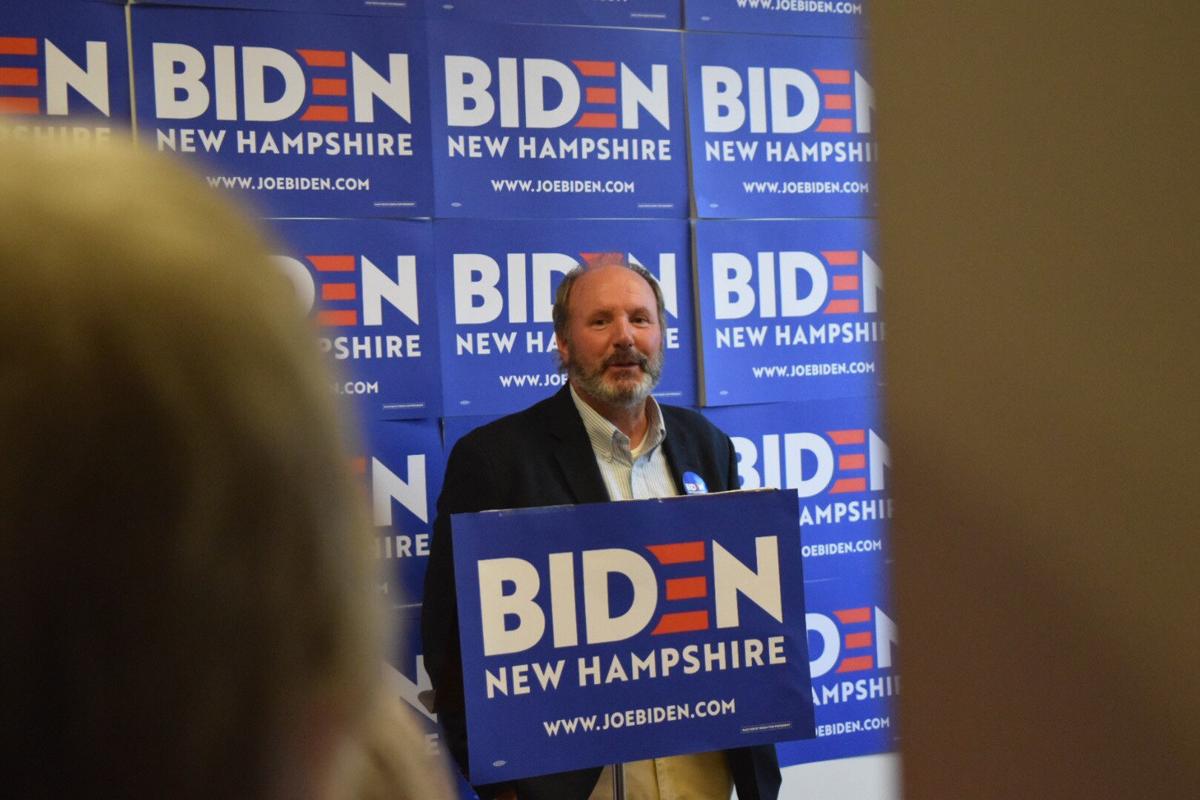 Jason Carter, left, a Keene State College sophomore from Hillsboro, talks about the 2020 presidential campaign with Jake Blaut, a field organizer for the Biden campaign who is based in Peterborough.

The Biden field office is in the unit behind the Thirsty Owl at 141 Winchester St., across from the Keene State College campus, the same location as President Donald Trump’s field office when he was running in the 2016 Republican primary.

Coates, who also sits on the Keene Board of Education, announced his endorsement while giving remarks to a group just shy of two dozen attendees Wednesday night after refreshments were served and campaign staffers asked for volunteers.

He recalled meeting Biden in the spring of 1986 at a function for the Special Olympics in Washington.

After Coates — an Elm City native — told the then-U.S. senator from Delaware where he was from, Biden offered a reaction similar to those he made at his recent rally in Keene.

“Now, the next part I’m gonna say, you’re gonna say, ‘ugh,’ but [Biden] said, ‘That is God’s country,’ ” Coates told the crowd as they erupted in laughter. “Now, I know that recently he said it, but he meant it, and that touched me — that he said that — but then I watched him, because we had Olympians there with their families.”

Coates was working behind the reception desk after starting an internship with the Special Olympics, and recalled how Biden stood out from professional athletes and other celebrities in attendance.

“He was over with [the Special Olympians’] families,” Coates said. “He was over there — and I don’t mean just [going through the motions] — I mean, he spent most of the evening there ... making them feel valued. And right there, that day, is when I said, ‘That’s a man I can follow someday.’ ”

Coates said he went on to support Biden in the 1988 Democratic presidential primary — in which Biden was the first candidate in the race to open a field office in Keene — and touted the former vice president’s pragmatism, reform-mindedness and ability to unite the country.

“One of the things I like about him is that he takes what we currently have and says, ‘How do we make it better?’ ” Coates said of Biden’s policy chops amid a crowded field offering a steady stream of proposals.

While some voters at Wednesday night’s launch party said they’re keeping their candidate options open in the primary, others said they’re already sold on Biden.

Jason Carter, a sophomore American studies major at Keene State from Hillsboro, said he didn’t normally go to presidential campaign events in primary years growing up. But meeting Biden on the Keene State campus last month made him want to volunteer for the former veep.

Describing Biden as personable, Carter said, “when I met him, he gave me some faith that maybe not [every politician] is out for a paycheck.”

The opportunity to rally support for Biden on a college campus is also important, Carter said.

“Right now, I think everyone [on campus] is of the mindset that they don’t care, which is really unfortunate because walking around on campus, I’m like, Jesus Christ, we could change stuff!” he said.

Gene Faltus, 67, of Swanzey said his support for Biden is personal after hearing about the candidate losing his eldest son, Beau, to brain cancer when Beau was 46.

In the handshake line after Biden’s Keene State rally on Aug. 24, Faltus told the former vice president that he has terminal cancer. Biden put his arms on his shoulders, and the two had a moment captured in a video posted on the campaign’s Facebook page.

“The reason I support him is because he speaks about optimism,” Faltus said, adding that the video “was icing on the cake.”

At Wednesday’s field office launch, Faltus was put in touch with campaign staffers and given options on how he can help out.

After moving to Swanzey from Connecticut in March, he — like many Granite State transplants — has taken a carpe diem approach to the primary, getting out to as many events as possible and engaging with candidates and campaigns in a way he would have never been able to just over an hour south on I-91.

“Because of my limitations and because of my health, I don’t know about knocking on doors,” Faltus said. “But I’ll be over there at 5 a.m. Saturday morning over in Manchester [for the N.H. Democratic Party Convention]. I’ll show my support and thanks.”