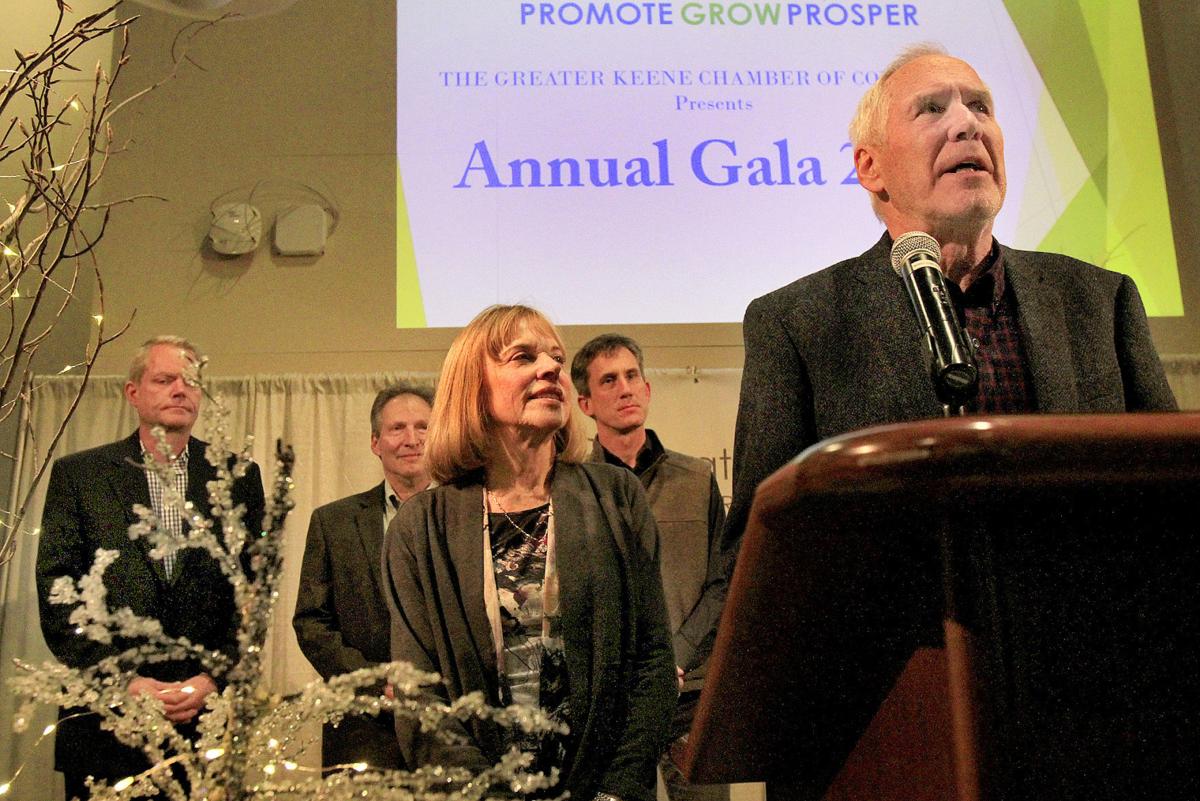 With his wife, Christine, at his side, Tedd Benson accepts the Windsor Brooks Award for business of the year for Bensonwood Homes and its sister company, Unity Homes, at the Greater Keene Chamber of Commerce’s Annual Gala at Keene State College Thursday night. They were joined on the stage, from left, by Andrew Dey, chief operating officer for Unity Homes; Bob Oberlander, the chief financial officer for both companies; and Hans Porschitz, COO for Bensonwood. 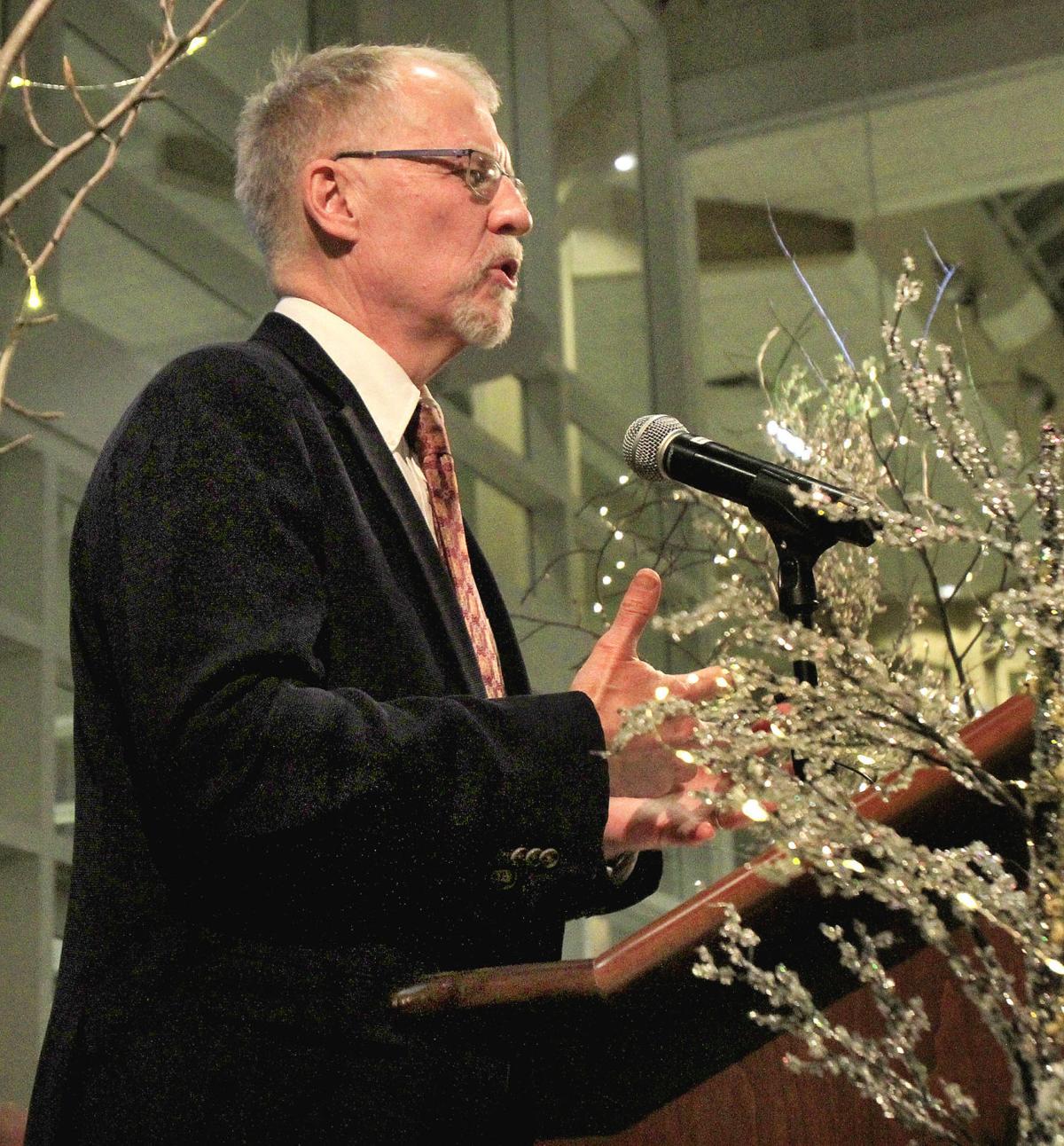 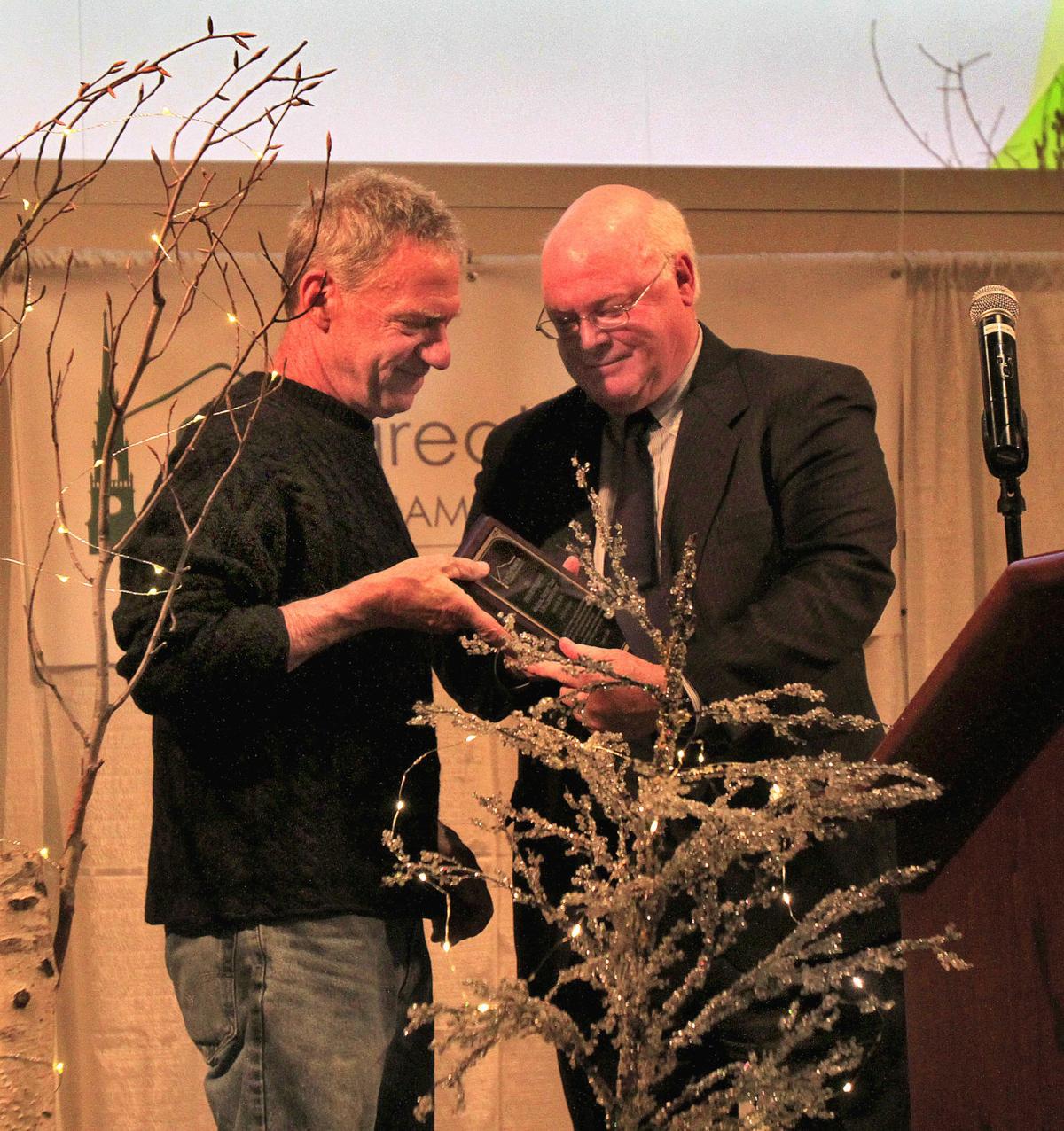 With his wife, Christine, at his side, Tedd Benson accepts the Windsor Brooks Award for business of the year for Bensonwood Homes and its sister company, Unity Homes, at the Greater Keene Chamber of Commerce’s Annual Gala at Keene State College Thursday night. They were joined on the stage, from left, by Andrew Dey, chief operating officer for Unity Homes; Bob Oberlander, the chief financial officer for both companies; and Hans Porschitz, COO for Bensonwood.

Along with the tradition of honoring an area business and resident at its annual gala Thursday night, the Greater Keene Chamber of Commerce added a new accolade to the celebration.

The Windsor Brooks Award for business of the year went to Bensonwood and its sister company, Unity Homes. Michael R. Chelstowski of Keene received the Community Service Award for citizen of the year.

Before those honors were presented, though, Keene chamber President and CEO Phil N. Suter announced a new President’s Award “to recognize something which has a broad, transformative and lasting effect.” Handed out at the discretion of the chamber’s staff, Suter noted that this new award will not necessarily be given out each year.

Addressing the audience of more than 400 in Keene State College’s Zorn Dining Commons, Suter paid tribute to the Walldogs mural festival that produced 16 history-themed pieces of artwork throughout the city, and recognized the immense effort behind it.

“Suffice it to say that for four days last June, this town was transformed in the most magical way,” he said, “and the results of the work of more than 200 artists that came to Keene are visible everywhere and will be for years to come.”

Of the many people involved in making the festival happen, Suter said, two in particular guided the project. For this reason, Peter Poanessa, owner of Keene Signworx in Swanzey, and Prime Roast Coffee Co. proprietor Judy Rogers received the inaugural President’s Award.

Rogers was unable to attend the gala, so Poanessa accepted on their behalf and briefly thanked the community for helping the mural festival come to fruition.

Reagan Messer, executive director of the 2018 business of the year, MoCo Arts in Keene, highlighted Bensonwood’s accomplishments before announcing it as this year’s winner.

Tedd and Christine Benson founded the company in 1973 in Alstead. That office remains open, though the headquarters has since moved to Walpole. A third office opened in Keene in recent years.

Bensonwood manufactures and builds timber-frame homes and commercial buildings using a method in which sections are constructed in a controlled environment and then assembled on site.

Unity Homes was launched in 2012 as a spinoff of Bensonwood, using the same technology but focusing on energy efficiency and affordability.

Standing at the podium with his wife, Tedd Benson hesitated before speaking into the microphone.

“I don’t know if I can do this alone,” he said, pausing. “Yeah, would the rest of you come up, please?” He beckoned the other company representatives from his table to the front of the room while the audience applauded.

The Bensons were joined on stage by Andrew Dey, chief operating officer for Unity Homes; Hans Porschitz, COO for Bensonwood Homes; and Bob Oberlander, the chief financial officer for both companies.

Tedd Benson credited his team, as well as the Monadnock Region, for his businesses’ success. He compared the sense of community pride to the values that helped literally build the country.

He gave the room a condensed version of the history of timber framing, which he said was a common construction practice that got a unique twist when it came to North America. Here, he said, people worked with their neighbors rather than relying on a few individuals, and together they erected town halls, churches, barns and homes in a growing nation.

“It’s that spirit that we tried to mimic to build our company,” Tedd Benson said, nodding to the roots in New England. “We couldn’t have done it anywhere else.”

The 2018 citizen of the year, Susan Newcomer, introduced Chelstowski, withholding his name as she described his volunteer service, including stints on the boards for Monadnock Family Services, Monadnock United Way, and Home Healthcare, Hospice and Community Services.

Chelstowski is a member of the Elm City Rotary Club and the adviser of Monadnock Regional High School’s Interact Club. While in El Salvador with Interact, Newcomer said, Chelstowski chose to pay for a child’s schooling there. For the past five years, he’s volunteered with the America Reads Program at Winchester School, she said.

Someone who testified to his work with the school called Chelstowski “Winchester’s own Mr. Rogers,” Newcomer said.

He spent the entirety of his professional career at Cheshire Medical Center, starting when it was still the Keene Clinic and retiring in 2014 as the senior vice president of professional services.

Chelstowski’s wife, Kathy, and their family and friends crowded onto the stage as he told the room he appreciates the chance to work with everyone in his volunteer efforts, from seniors to kids of all ages. He also said he enjoys meeting so many people who freely give their time and energy to others, such as teachers, social workers, caregivers and fellow volunteers.

“There’s just so much good, positive force in this area that it’s just really heartening for me to be able to be in contact with that and see what they do,” he said.

The evening’s keynote speaker was Taylor Caswell, the commissioner of the N.H. Department of Business and Economic Affairs. He lauded the quality of the state’s workforce but stressed a need for training, educational programs and creative solutions to labor shortages, such as automation that could bolster productivity and make certain tasks easier for employees. Caswell underscored the impact of the housing crisis on the economy, noting that recruiting people to the state can prove difficult “if there’s nowhere for them to live.”

Improving economic development isn’t exclusively a state project, he asserted, but also a collaborative effort among its communities. The goal is to grow the economy “in a way that doesn’t destroy” New Hampshire’s best assets, Caswell said, while setting up the next generation for success in what he called, “Live Free or Die 2.0.”